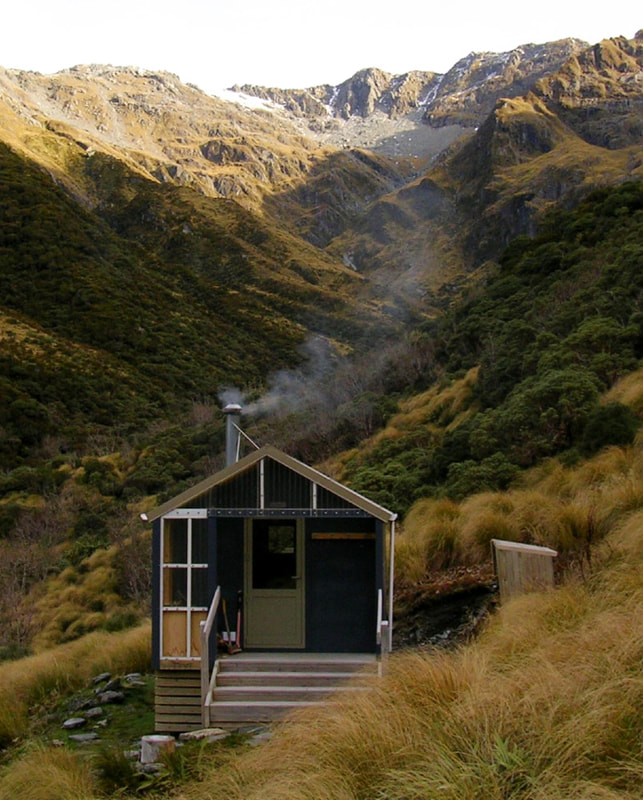 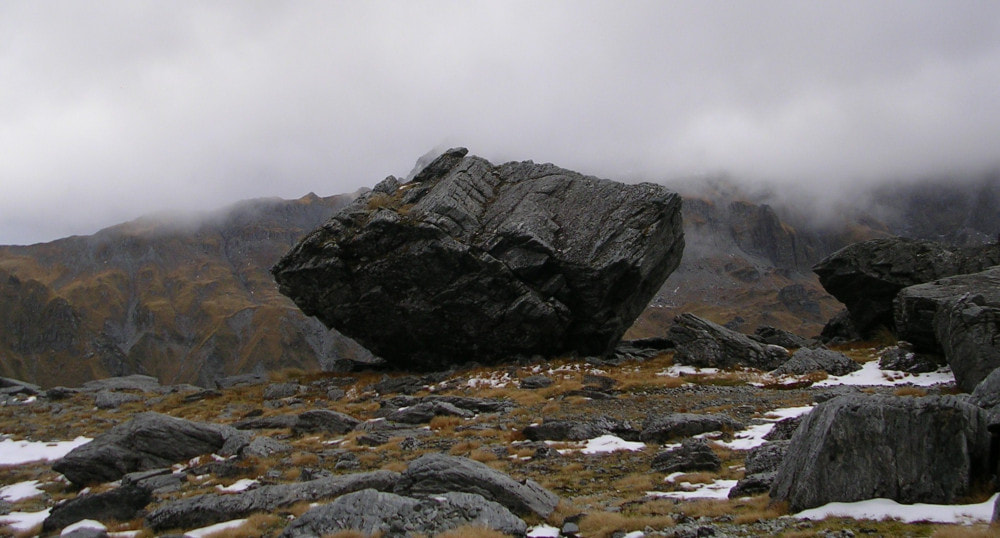 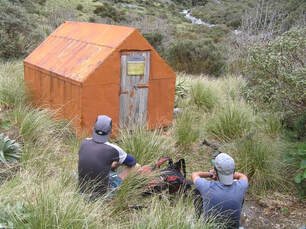 Top Kokatahi Biv in 2006 before its removal.
Maintenance status
Top Kokatahi Hut and the routes and access tracks to it are designated as fully maintain currently. The tracks were last maintained in 2020.

Location
Kokatahi catchment. Map BV19. Grid Ref: E1452365/ N5239498 (BV19 524 395). Altitude 1050m. Top Kokatahi Hut is located on the TL of the upper Kokatahi valley, 50m upstream from the side-creek that drains Zit Saddle. The Hut started its life at a site midway down the upper Kokatahi valley, but was shifted upriver in 2008 to replace the semi-derelict Top Kokatahi Biv. Above the Hut the Kokatahi River rises steeply to its headwaters where the Main Divide intersects the Toaroha Range. Top Kokatahi Hut is on the Lathrop - Zit Saddle, circuit, a reasonably popular route of moderate difficulty.  The circuit has become more popular in covid times with 20 parties/~50 people passing through up until July this year. A number of interesting high-level routes are also possible from the Hut.

Access
The most direct route to Top Kokatahi Hut is from the Toaroha valley and a poled route that crosses the Toaroha Range just North of Zit Saddle. It is a three hour walk from the Toaroha roadend to Cedar Flat Hut, then a two hour climb up a steep ridge track to Adventure Biv A track leads from the Biv up through a band of alpine scrub before veering South off the Ridge at 1080m and sidling across scattered alpine scrub faces into the upper TR branch of Zit Creek. The track climbs steeply out of the Creek on the TL up through a band of alpine scrub onto a tussock rib. Snow-poles lead up the rib, then a steep tussock face, onto the crest of the Toaroha Range around E1451380/ N5240035 (BV19 514 400). The poles continue straight over into the the Kokatahi catchment, down a rock gut into the creek draining Zit Saddle (the crossing is marked incorrectly on NZ Topo Maps and is actually 300-400 metres further north along the Range than indicated). The creek is followed down to around 50m above its confluence with the Kokatahi. Exit on the TR here and head upriver for 50m to Kokatahi Hut. Allow around three hours in good conditions for the crossing from Adventure Biv to Top Kokatahi Hut. Ice axes need to be carried on the steeper pitches near the top of the Range during the colder months.

Accessing Top Kokatahi from the Styx end of the Zit/ Lathrop circuit takes around three days. The tracked sections in the Crawford and upper Kokatahi are fully maintained and usually in pretty good condition. The track from Crawford Junction Hut follows the TR of the Kokatahi until just past the first side-creek, where a cableway provides access to the TL. The track follows the TL for around four kilometres to a swingbridge where crosses to the TR. There are two more fords within a short distance, back to the TL, then back again to the TR. From here to the Hut travel is rough, however the tracked bits are good going. Allow 4-5 hours to get to Top Kokatahi Hut from Crawford Junction currently. Don’t attempt this route if the River is up.

Access to Top Kokatahi from the lower Kokatahi valley is a more challenging affair. Permolat volunteers re-opened the track from Boo Boo Hut to the Twins 3-wire in 2005, and some of the bluff detours on the TR from the swingbridge to the Junction were cut and marked in 2017. Unfortunately, the 3-wire was badly damaged by a slip, removed by DOC in July 2021, and won't be replaced. A long abandoned NZFS route up the TL of the valley from Meharry Creek was re-established by Permolat volunteers in October 2021. It is rough and unformed, crosses some actively unstable terrain, but the bush sections are cut and well marked. Fords of the Kokatahi and Crawford are required which makes it a dry-weather route only.  NZ Topo maps still has the 3-wire marked and the track going from there up the TR.

There are four hot springs in the upper Kokatahi a short distance down from the swingbridge. Of the three on the TL, two are quite close together. The first is around 5m from the river's edge (GPS E1455336/ N5239902 (BV19 553 399)) and marked with white plastic. It's not overly hot and issues from a one-person-sized muddy pool. An overgrown spring on the low terrace nearby has a seep that trickles out to the river. The third is a large sulphury smelling luke warm spring in an old flood channel about 600m below the top two. The one on the TR doesn't get visited much, and there is no recent information on what it's like.

Type
Top Kokatahi's original site was on the TL of the large unnamed side-creek that drains Bastion Ridge, The Rampart, and Mt. Ambrose, just above its confluence with the Kokatahi. It was a NZFS S81 4-bunk design, with open fire, built in 1959. The open fire was replaced by a woodburner during Lands and Survey's tenure of the valley in the 1980's. The Hut was effectively rebuilt during the 2008 shift. It had most of its framing, bearers, and joists replaced, and underfloor and wall insulation, double glazed windows, porch, and roof-fed water tank added. A new wood burner replaced the original. A new toilet was built at the new site.

Condition
Top Kokatahi Hut is in excellent condition currently although there may possibly be a leak around the flue. The Hut turns rapidly into a sauna with the stove going. The main issue with the stove is the very poor wood supply in the vicinity. There are scattered olearia, mountain ribbonwood and dracohyllum around the hut but almost zero dead standing trees suitable for burning. The odd bit of driftwood can be fossicked from the creek.

Routes
The Toaroha Range can be traversed in both directions from Top Kokatahi To access Yeats Ridge Hut and Crystal Biv head upriver a short distance from the Hut until a clear line through the scrub and up the tussock faces onto the Range can be found. Follow the crest southward to point 1694m and branch off here along the prominent western side-spur. The spur branches around the 1300m mark and access to Yeats is down a scrubby face on the NW fork. There are a few waratahs and stakes (the top waratah is at E1449761/ N5238689 (BV19 498 387)) leading to a cut and marked trail down a scrubby face. At the bottom of the face more poles lead North through patchy scrub and open tussock onto a low ridge bounding Zit Creek. Follow the trail along the ridge to a gently sloping tussock gully that provides access into the open basin below the Hut. Intermittent wooden stakes lead over to the Hut which is clearly visible from the 1200m mark down. Allow 3-4 hours in good conditions for this crossing.

Crystal Biv is accessed down the SW fork of the spur and is visible from near the top in fine weather. It is easy, open travel down to the Biv, with a bit of scattered scrub to negotiate just above the big tarn. Allow 3-4 hours for the crossing in good conditions.

Top Toaroha Hut can be accessed from Top Kopkatahi Hut by following the River up to around the 1160m contour, then climbing up onto point 1694m. Drop from here down the broad spur that separates Crystal and Chamberlain Creeks. Access down to Bannatyne Flat from the knob directly above Top Toaroha Hut. The Hut is visible directly below from around the 1100m contour. At around the 1050m contour the top a steep, open gut can be picked up and followed all the way down to Bannatyne Flat.

Mungo Hut can be accessed from the head of the Kokatahi and the low point between point 1814m and Mt. Chamberlain. The Kokatahi above the Hut is rough and bouldery but negotiable. There are a few small waterfalls to negotiate. From the saddle in the head, sidle around the rocky benches on the East side of Mt. Chamberlain to the low point between Chamberlain and Mt. Bannatyne. Drop from here down a steep gut that provides access into the head of Park Stream. The top section of the gut is steep and eroding, is snow-filled for most of the year, and can be icy near the top. It is recommended that ice axes are carried for this bit. Once in the Park, boulderhop down to where the Stream veers SW, a short distance above Topo Creek. A short steep track up to the Hut exits here on the TL, its entrance marked with cairns and cruise-tape at the downstream edge of a big boulder bank. The track was recut by volunteers in 2020. Allow 4-6 hours from Top Kokatahi Hut to Mungo Hut depending on conditions.

A traverse of the Toaroha Range down to Pinnacle Biv is possible from Top Kokatahi Hut. Follow the Adventure Biv route to the crest of the Range, then continue up and over Mt. Reeves. There are a couple of jagged little knobs as you drop from point 1618m towards Genoa Peak. Sidle from the low point between Point 1618m and Genoa Peak in a northerly direction down a series of tussock benches into the small basin in the North fork of Alice Creek. From here you can climb directly up onto the SE shoulder of Crinkletop where the Biv is located. Allow 5-6 hours to get from Top Kokatahi Hut to Pinnacle Biv.

Provisions on site
One coal bucket, an aluminium basin, three brooms, a spare broom handle, two hearth brushes and a hearth shovel, two axes, a bow saw, a bench and two wooden bench seats. There is a small wooden ladder under the Hut.
Powered by