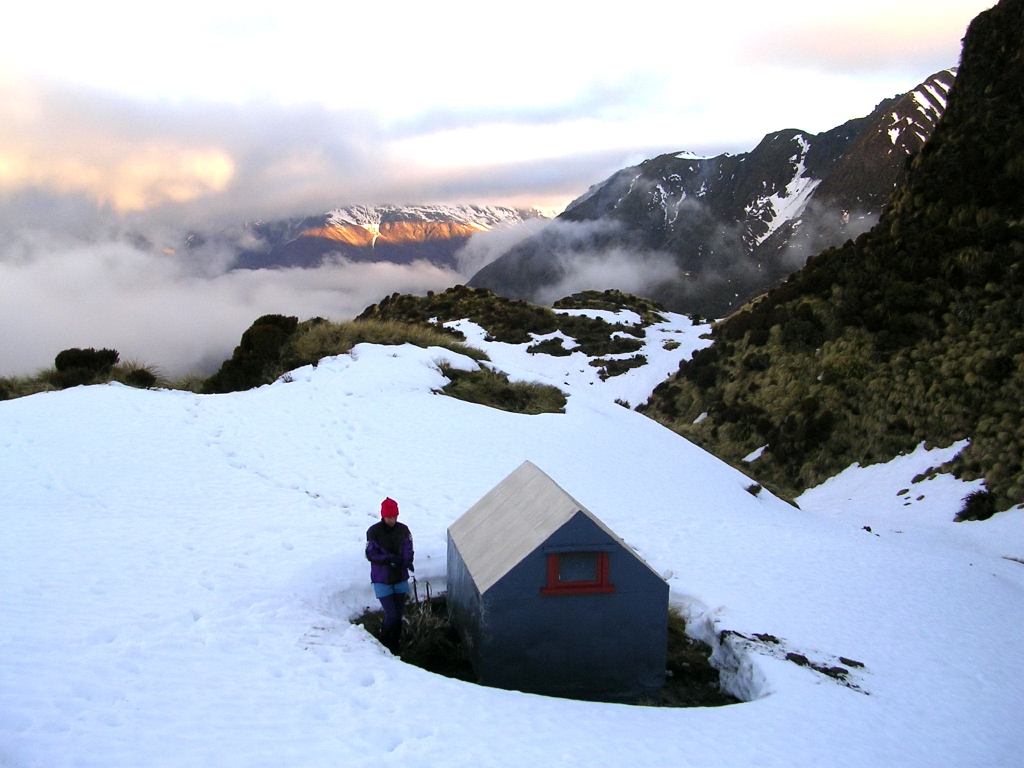 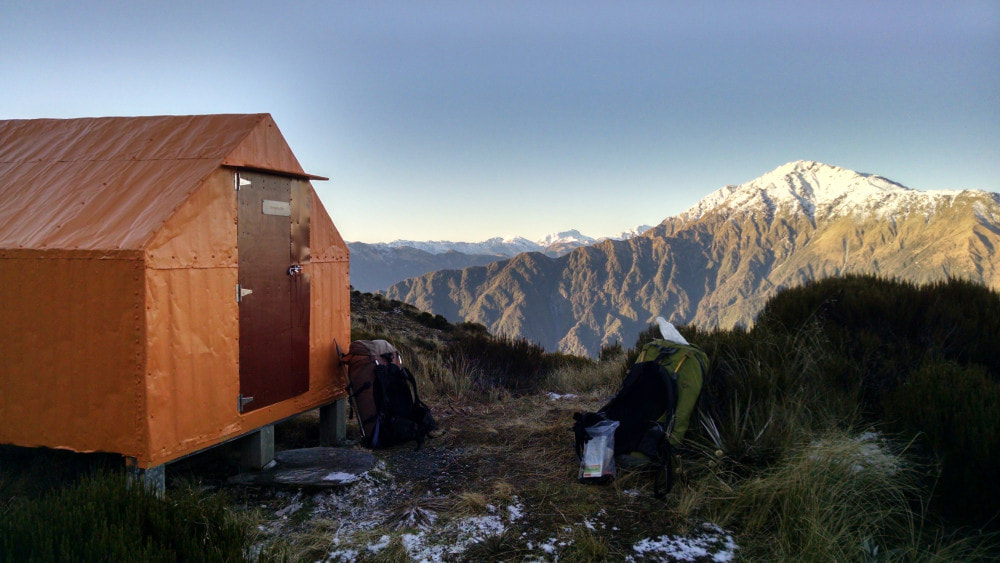 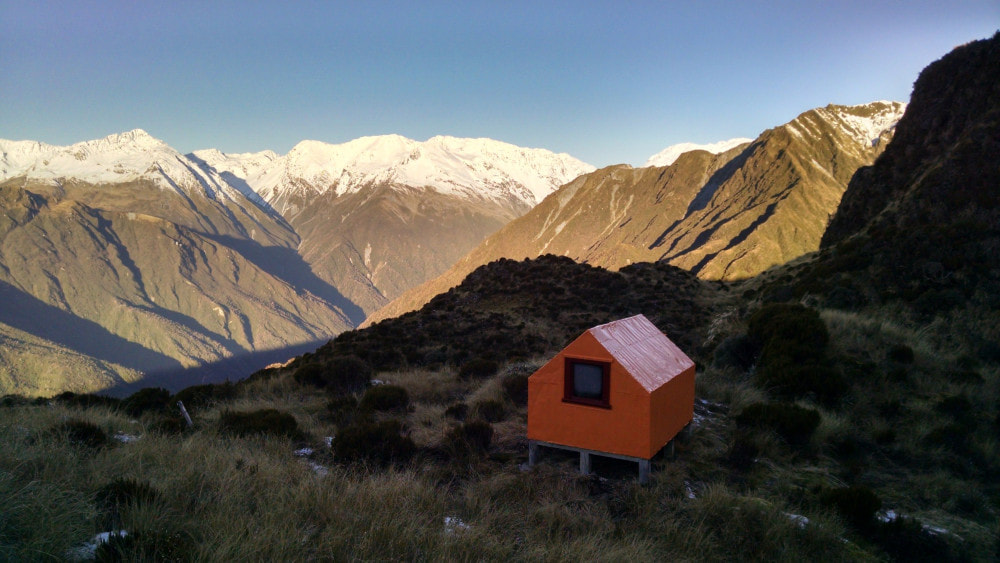 Maintenance status
Pinnacle Biv is designated as fully maintain currently. The track to Pinnacle and those in the lower Kokatahi were removed from DOC's maintenance schedule several years back, but have remained serviceable thanks to volunteers who have kept them trimmed and reasonably well marked.

Location
Kokatahi catchment. Map BV19. GPS Ref: E1451374/ N5244477 (BV19 514 445). Altitude 1253m. Pinnacle Biv is located just below the summit of Crinkle Top at the northern end of the Toaroha Range. It is most often used as a stopover on a 3-day tops circuit of the Toaroha Range, that takes in Adventure Biv and the Toaroha Valley. Genoa Peak is a 30-40 minute climb from the Biv, and tops travel South along the Toaroha Range is reasonably straightforward in good conditions.

Access
The Pinnacle Biv track turns off from the main Kokatahi valley track five minutes before Boo Boo Hut It was re-cut and permolatted by volunteers in March and May 2020. The trackline goes the up TL of a small creek initially, then leaves the creek and continues straight up the bush faces, eventually connecting with a broad spur at the tussock line. Poles and cruise-tape lead due South from here along the spur and through a couple of narrow bands of scrub just below point 1085m. A scrubby gully is crossed onto a narrow rib and this is followed up and over point 1085m. There is a dip in the ridge, then a final climb through a band of alpine scrub to Crinkle Top. Allow 3-4 hours from Boo Boo to Pinnacle Biv currently, or 7-9 from the roadend.

When dropping from Pinnacle Biv down to Boo Boo Hut make sure you don't continue down the rib East of point 1085m. Instead drop into the gully on the rib's TL at the pole around E1452037/ N5244963 (BV19 520 450). Sidle North across the gully onto the next spur and follow that down. More than one party has missed this turn and continued down the bush faces into the Kokatahi. Not a fun route.

Type
The current Pinnacle Biv is an NZFS two-person B49 design that started its life as Top Crawford Biv in the head of the Crawford valley. It is  with flat iron walls and roof and two narrow sleeping platforms, built in 1957. It appears on the older maps as Crinkle Top Biv, but this moniker fell out of use over time. In 2011 DOC shifted Crawford Biv, which was being replaced when Top Crawford Hut was relocated to the head of the valley. There are no mattresses on the sleeping platforms and no toilet at the Biv site. Please crap well away from it. A tarn just below the Biv provides water.

Condition
In 2016 DOC carried out some major maintenance on the Biv in which the end walls were removed, reframed, papered, reattached and sealed. The flat head nails securing the external iron cladding were replaced by small hex bolts. This should make the exterior shell super secure and watertight. A new door and flashings, and a new window and flashings were added. Some flooring repairs were carried out, along with a full paint job. The Biv is in top condition currently.

Routes
The Toaroha Range is accessed from the Biv along the ridge between Crinkle Top and Genoa Peak. There are some beautiful tarns and good campsites on the main ridge SE of Genoa Peak and travel along the Range from here is fairly straightforward in good conditions. Genoa Peak can be skirted by dropping into the top basin of Alice Creek and ascending a series of tussock benches to the low point between Genoa Peak and point 1618m.

The crest of the Range rises fairly steeply towards point 1618m. This is a large flat area which is followed by another steep pitch heading towards the summit of Mt. Reeves. Adventure Biv can accessed by sidling off the ridge around 1650m where it flattens for a bit, and descending in a SSW direction onto a flat bench at the 1500m contour. Drop off the end of the bench in a SW direction down a steep narrow rib bounded on both sides by guts. This provides access onto the broad tussock face directly above Adventure Ridge. There are bands of bluffs on the southern faces of Mt. Reeves and good visibility is required to pick a suitable line down through them. Adventure Ridge doesn't become particularly well-defined until just above the Biv and it would be easy to miss it in poor visibility and end up down in Median Creek. A maintained track leads through the band of alpine scrub directly above the Biv. Allow 4-6 hours for the traverse from Pinnacle Biv. Ice axes and crampons may be necessary, and should always be carried, as a matter of course during the colder months.

Top Kokatahi can be accessed from Pinnacle Biv by heading directly over the top of Mt. Reeves and continuing down to where the poled route from Adventure Biv crosses the Range just North of Zit Saddle. Follow the poles over into the head of the unnamed creek that drains Zit Saddle. Follow this down to a point about 100m metres above the Kokatahi River from where the Hut is visible 50 or so metres upriver. Allow 4-6 Hours for the traverse in good conditions.

It is possible to access Crawford Junction Hut over the tops and down Blue Duck Creek. Two sets of waterfalls need to be skirted in Blue Duck Creek. The first in the headwaters, is in open tussock, and reasonably easy to get around. The lower falls are in a gorge that cuts down through the alpine and sub-alpine scrub zones. A high sidle and scrub bash on the TL is required to get around this. Access back into the Creek is down a steep slip that enters at the bottom end of the gorge. The lower reaches of the Creek are easy travel and the Kokatahi can usually be forded at normal flows, just upstream from the Blue Duck confluence. Allow 5-7 hours for this route.

An old NZFS track up Allan Knob from Cedar Flat in the Toaroha has recently been recut. The last couple of hundred metres are still a little bit rough, but it wouldn't take much to tidy it up with hand tools. There's a couple of light scrub patches further up but there's a good deer trail through them which has been taped. There's still a fair amount of original permolat on the track itself and taped on any gaps. The Pinnacle is traversable with one short bit on the Toaroha side that might be slightly awkward to downclimb with a pack. This route offers a great alternative traverse option of the Toaroha Range.

Provisions on site
One billy, a small amount of permolat, some coarse sandpaper and a few nails.