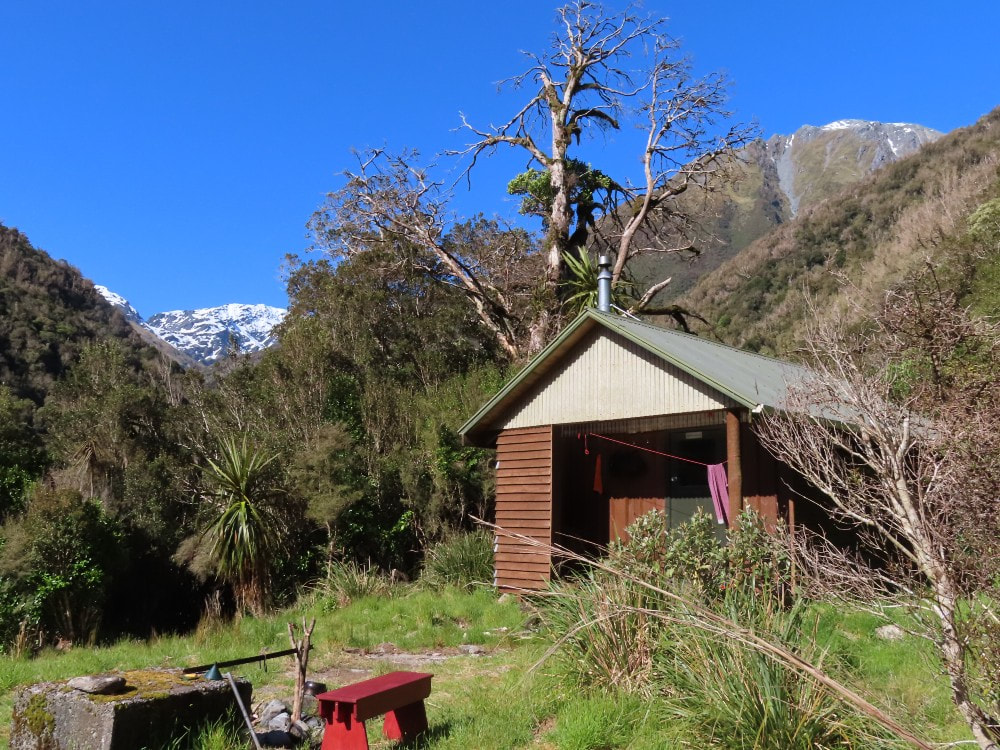 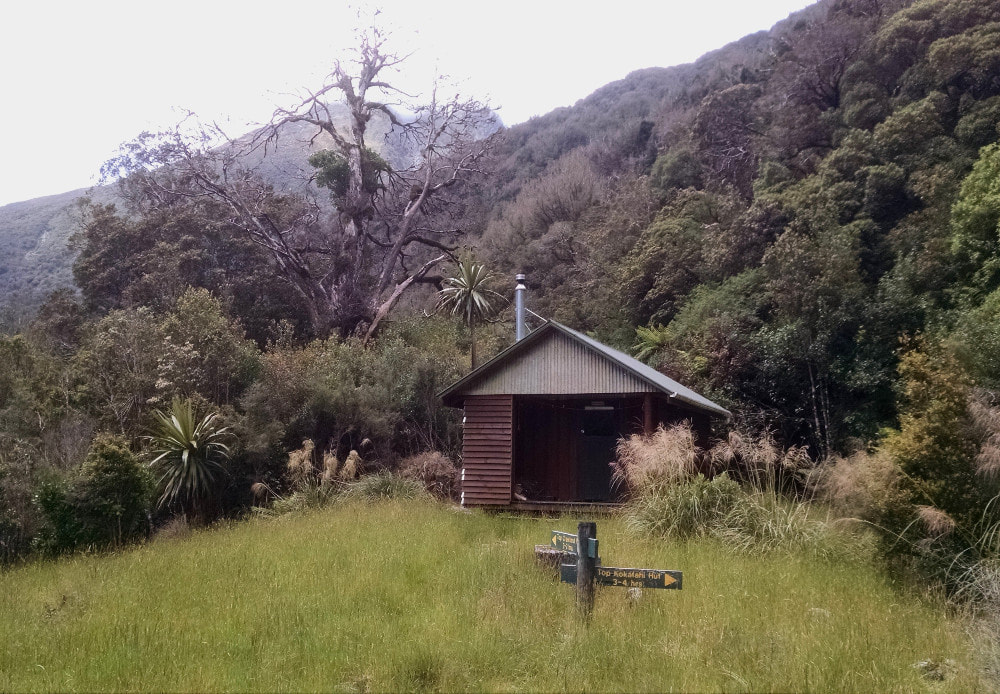 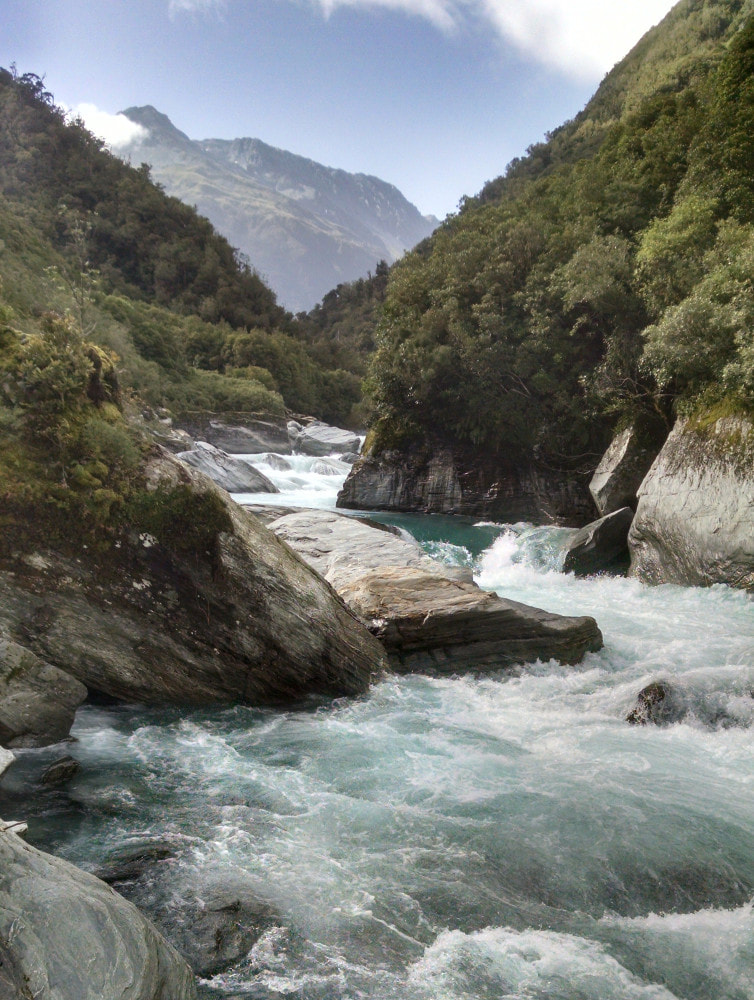 The reinstated TL trackline from the old Twins Hut site

Maintenance status
Crawford Junction Hut and its access tracks and routes from Lathrop and Zit Saddles are fully maintained by DOC. The tracks in the lower Kokatahi and essential sections of the old NZFS track above Meharry Creek are being maintained by the Permolat Group. In July 2021 a badly damaged 3-wire providing access to the TR was removed, making access up the valley very difficult. We'll be looking at opening up an old NZFS route on the TL at some point but until then It's probably better to access Crawford Junction via the DOC maintained Saddle routes.

Location
Kokatahi catchment. Map BV19. Grid Ref: E1455989/ N5242063 (BV19 560 421). Altitude 433m. Crawford Junction Hut is located at the junction of the Crawford and Kokatahi Rivers. It is on the Lathrop Saddle - Zit Saddle circuit, a reasonably popular wilderness route of moderate difficulty. The forest around the junction is rata/ kamahi and hardwoods. There is a fairly large open river flat downriver from the Junction, and the hutsite is open and sunny.

​Access
Visits to Crawford Junction these days are usually made by those doing Lathrop Saddle - Zit Saddle circuit, a DOC-maintained and reasonably well publicised remote back-country circuit. Travel from the Styx or Toaroha roadends to Crawford Junction using the circuit takes a good two, or more normally, three days.

Official maintenance of the track from Boo Boo Hut in the lower Kokatahi to Crawford Junction ceased sometime in the 1980's. In the ensuing years this part of the valley achieved considerable notoriety for its roughness, with accounts aplenty of epic trips in the Boo Boo and Crawford Junction hutbooks. Permolat volunteers reopened the track from Boo Boo to the Twins 3-wire in 2005, and some of the bluff detours on the TR from the swingbridge to the Junction were cut and marked in 2017. Unfortunately, the 3-wire was badly damaged by a slip and removed by DOC in July 2021. In the late 1950's NZFS had tracks up both sides of the valley, but the TL one wasn't kept maintained and had pretty much vanished back into the bush by the 1980's. In September I went in and cruise-taped a route as close as possible to the old trackline, even managing to find a few bits of the original permolat here and there. Four of us went in and recut and marked the bush sections of the route in October. The re-established track is rough and unformed but well marked. It crosses some actively unstable patches, and has a few sections of boulder travel.  NZ Topo maps still has the 3-wire marked and the track going from there up the TR.

From Boo Boo he track sidles across the bush faces for a half hour or so to some dry rocks, the larger and more weatherproof of which is 20m uphill from the track. I moved a plastic water barrel from further down the track so there's a bit of water there. The track drops from the rock bivs in a series of steps into Pinnacle Creek, then up and over a narrow rib into Alice Creek. It crosses another rib into Meharry Creek and up onto the terrace and clearing where Twins Hut used to be. The re-established route starts here dropping steeply off the terrace and angling down a steep overgrowing slip into the Kokatahi riverbed. There follows an actively unstable section with big boulders and short bush detours to an unmarked side-creek where the track enters the bush, climbs, then sidles across the bush faces above the River. The track drops back to the riverbed at the unnamed creek 500m downriver from Blue Duck Creek. A mix of track and boulder travel takes you to the Blue Duck which is crossed and a short section of track followed to where the Kokatahi cuts into a shingle bluff. A 50m wade is required around the bluff to get you back onto open riverbed.

The Kokatahi can usually forded here and a direct line taken up the River flats on the TR to where the Crawford currently runs in two easily forded channels opposite the Hut. If this is not possible continue up the riverbed on the TL (with one small tracked bluff detour) to where the Kokatahi splits into two braids just above the Crawford confluence. The Kokatahi is not easy or safe to ford when it's running above normal levels and both Alice and Blue Duck Creek are swift, and could be dangerous or uncrossable if running high. If the Kokatahi is running high you'd be well advised to continue up the TL and use the Crawford Junction cableway. This bit is mostly river travel with three small cut and marked bush detours. Allow 4-5 hours for the journey from Boo Boo to Crawford Junction and be prepared for some quintessentially rough West Coast bush and river travel. 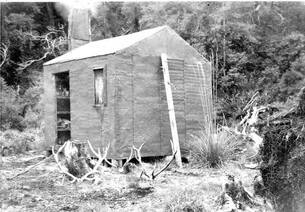 Crawford Junction 1957
​The Top Crawford Hut route follows the riverbed initially, for around 15 minutes. A track then enters the bush and passes through a nice patch of rata forest before hitting Farquharson Creek. This is a big stream that is impassable after heavy rain. The track undulates along the River for around one km, then does a steepish climb before levelling and sidling at quite a high level above the Crawford River. It passes through montane and subalpine forest on its gradual ascent to the top basin. The last 15-20 minutes before the basin is river travel. The track was recut by DOC in March 2020 is in good condition currently apart from one steeply incised little slip about 20 minutes upriver from the original TC hut site.

The track from Crawford Junction Hut to Top Kokatahi Hut follows the TR of the upper Kokatahi until just past the first side-creek, where a cableway provides access to the TL. The track follows the TL for around four kilometres to a swingbridge. Part of this section is river travel and recent floods have shifted the riverbed in a number of places, meaning you now either have to wade, or bush bash. At the bridge there is a DOC sign reading, “Zit Saddle”. It wasn’t previously necessary to cross here. The track continues up the TL for 10 minutes to a ford, however this has become quite tricky since the floods of December 2019 and I’d recommend crossing the swingbridge and bush-bashing up the TR to connect with the track above the ford. There are two more fords within a short distance, back to the TL, then back again to the TR. From here to the Hut travel is rough, however the tracked bits are good going. Just below the Hut the River has cut against the bank in a couple of places and a couple of short scrub bashes are required. Allow 5 plus hours to get to Top Kokatahi Hut from Crawford Junction currently. Don’t attempt this route if the River is up.

Type
The original Crawford Junction Hut was probably built by the Department of Internal Affairs in the early/ mid 1950’s and extended at some point when NZFS took over the valley. Bill Johnson was a culler at the time and did a lot of early hut building. He first used the Hut in April 1960 and said it was already extended by then, badly in need of care, and not a lot of fun to sleep in with rats and possums rustling around at night. It was also reputed by some to have a ghost in residence. Lands and Survey built the new Hut next to the old one which served as a drying shed for possumers until removed by DOC in the early 2000's. The current Hut is a wooden cladded structure, the inside walls and floor timber-lined, and has a spacious veranda at the front. There are six bunks with mattresses, and a wood burner, and the Hut is cozy when the burner is cranked up. There is a roof-fed water tank and a loo that has an impressive barrier fence to stop people falling three metres down onto the riverbed. The only downside to the Hut's design is that rats are easily able to get into the ceiling cavity. Luckily, they seem to confine themselves to this space, rustle about a bit in the early evening, then quieten down for the night.

Condition
Crawford Junction Hut is very good condition currently. In 2018 DOC Hokitika did a good round of maintenance. The rats had made a bit of a mess in the roof cavity, eating out a lot of the building paper and insulation, as well as a small section of the ceiling. The roof iron had to be removed to clean it up. The old wood burner was removed and a new one installed and shifted into the corner of the Hut. The vegetation around the hut was cleared back.

Routes
There are a couple of old tops tracks in the vicinity of Crawford Junction, neither of which are likely to be of much use anymore. One directly behind the Hut used to go up onto the Main Divide. It's pretty much unfollowable in most places now, but if you were silly enough to go up that way you may find the odd permolat marker. There is a nice tarn and campsite on the NW flank of Mt. Fitzgerald at 1420m, and from here a good high sidle at just above the 1500m contour will get you around to Clarkes Pass.

The easiest approach to Clarkes Pass is by way of the Top Kokatahi track as far as Clarkes Creek. Ford the Kokatahi here and head up the ridge on the TL of Clarkes Creek. The bush isn't too bad going and at some point above the 800m contour it is possible to sidle into the Creek's upper basin. Don't go directly up the Creek from the Kokatahi River unless you are comfortable contending with large waterfalls. Once in the basin it is generally easy going, as are the approaches to the Pass. The Griffiths Stream side is a steep scree in late summer and autumn, and snow covered and possibly icy at other times. Ice axes and crampons need to be carried if crossing over in the colder months.

There once was an NZFS tops track up onto Whitehorn Spur starting somewhere around E1456394/ N5242400 (BV19 564 424). I wasn't able to find any semblance of it on a climb of Tyndall Knob in 2021, neither going up nor down. It's not a well defined spur and the bush and scrub travel is nothing to recommend. Once on the open tops is great travel.

Pinnacle Biv can be accessed directly from Crawford Junction via Blue Duck Creek, although the route is reasonably gnarly in the middle section. Head downvalley, ford the Kokatahi, then follow the Blue Duck up until just before the first gorge. Exit the Creek here up a slip on the TL and when sufficiently high it you'll need to do a scrub bash/ sidle back into the Creek. This is followed again to a second set of falls in the upper basin which can be negotiated fairly easily. From here Point 1618m can be accessed up the tussock slopes and crest of the Range followed from here. Adventure Biv could also be accessed in this fashion.

Repairs Needed
Nil currently. The handsaw has a broken handle and needs replacing.

Provisions on site
An axe, a bucket, a broom, a hearth brush and shovel, a 10 litre stock pot, a small billy, a small pot, a large shovel and a saw with a broken hand grip. Under the Hut there are bits of a cableway tower, one long section of plastic downpipe, two rolls of no. 8 wire, a waratah, a sheet of corrugated iron, a roll of chicken wire, one large 8x2 with treads for roof painting, a 10 litre pail of brown exterior paint, and a few odds and sods of timber.
Powered by