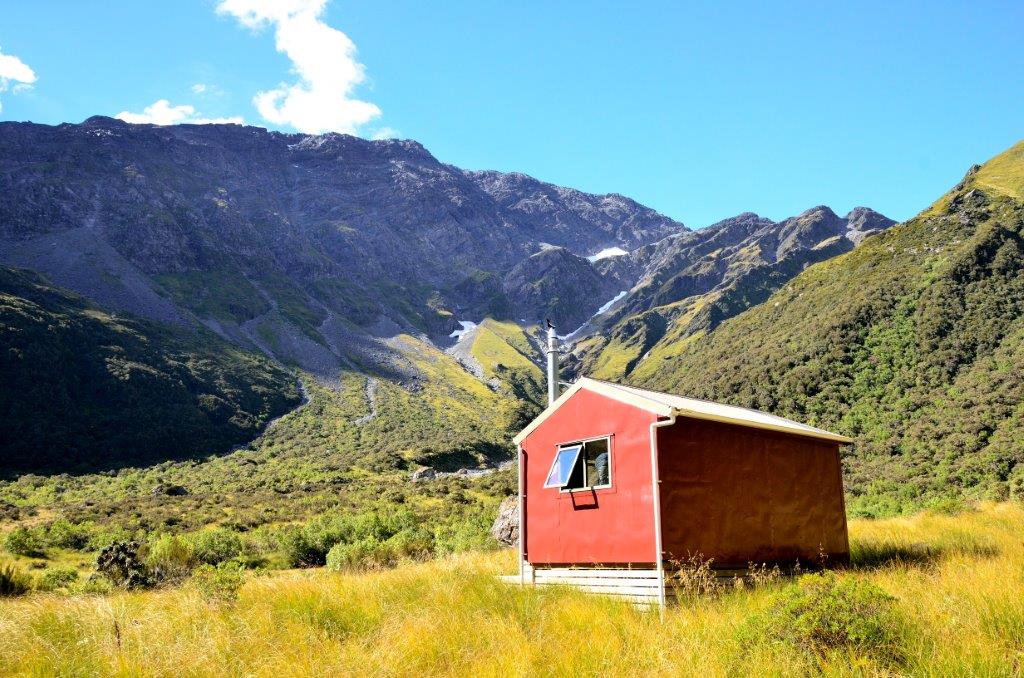 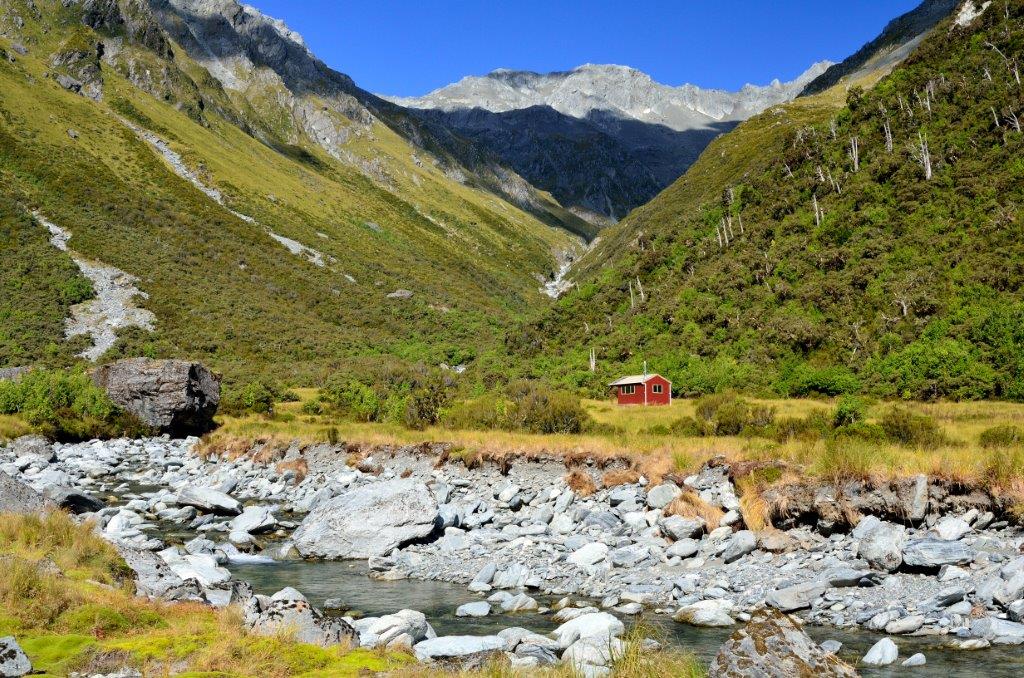 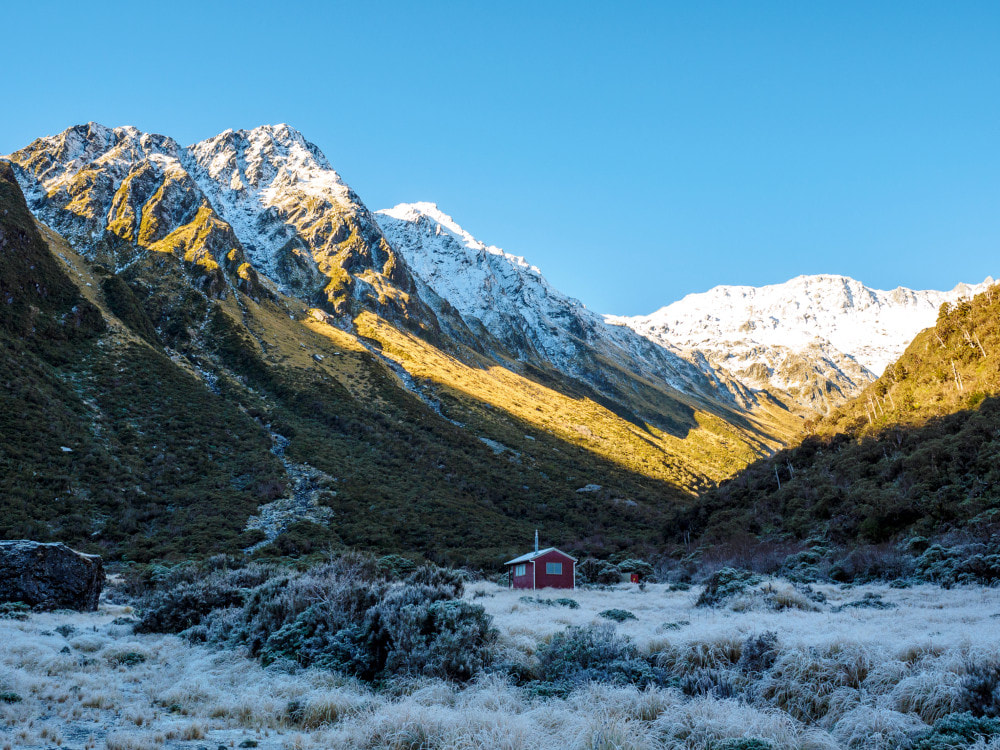 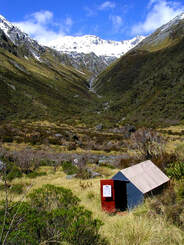 Location
Kokatahi catchment. Map BV19. GPS Ref: E1459546/ N5244938 (BV19 595 449). Altitude 835m. Top Crawford Hut is located to the top basin of the Crawford River, where it was shifted in 2011 from a site further down the valley. From 1958 until then the top basin was the site of Top Crawford Biv. The Biv was shifted downnvalley in 2011 to replace Pinnacle Biv. Top Crawford Hut can be found on the TL bank of the upper TL branch of the Crawford River, which is a couple of hundred metres across the River from the old Biv site. The Top Crawford basin is a beautiful expanse of open tussock with alpine scrub glades, ringed by the peaks of the Main Divide and the Browning Range. Top Crawford Hut is on the Lathrop Saddle - Zit Saddle circuit, a reasonably popular wilderness route of moderate difficulty. The tracks and snow-poled sections on the Crawford section of the circuit were last maintained in 2020.

Access
The most common approach to Top Crawford Hut is from the Styx roadend via Lathrop Saddle, and normally takes one and a half days. A cut track leads from Browning Biv in the Styx valley up a steep ridge through the alpine scrub onto the tussock faces below Lathrop Saddle. Snow poles lead from here up and over the Saddle, which is a U-shaped corridor strewn with large, shattered boulders and amethyst tarns. It's a beautiful crossing when sunny and eerie and silent when misty. 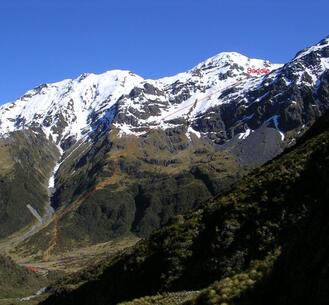 The Route down from Lathrop Saddle
The route down into Top Crawford basin is poled and sidles in a SW direction from the southern lip of Saddle across some steepish faces. Don't drop directly from the Saddle into the basin as there is a line of bluffs immediately below. There is snow on the sidle for a lot of the year and this is usually icy during the colder months. Ice axes and crampons need to be carried in winter and spring. The poles lead over to a broad spur (around E1458920/ N5245773 (BV19 589 458)), and drop down it towards the basin. The route zigs sharply to the right at the top of a band of bluffs around the 1100m contour and drop from the spur down a tussock face into the creek catchment below. The route follows a gut that runs parallel to the creek into the basin. Allow 3-4 hours from Browning Biv to Top Crawford Hut in good conditions.

Access to Top Crawford Hut from from the Toaroha end of the circuit over Zit Saddle takes around three days in good conditions. From Crawford Junction Hut follow the riverbed for around 15 minutes to pick up the track. The track passes through a nice patch of rata forest before hitting Farquharson Creek, which is big Creek that is impassable after heavy rain. The track leaves undulates along the River for around one km, then begins a steepish climb before levelling and sidling at quite a high level above the Crawford River. It passes through montane and sub-alpine forest as it angles towards the top basin. The last 15-20 minutes before the basin is river travel. The track was last cut in March 2020 and is in good condition currently aside from one steeply incised slip about 20 minutes upriver from the original TC hut site. Allow 4-5 hours to get from Crawford Junction to Top Crawford Hut.

Access to Top Crawford from the lower Kokatahi valley is a more challenging affair. Permolat volunteers re-opened the track from Boo Boo Hut to the Twins 3-wire in 2005, and some of the bluff detours on the TR from the swingbridge to the Junction were cut and marked in 2017. Unfortunately, the 3-wire was badly damaged by a slip, removed by DOC in July 2021, and won't be replaced. A long abandoned NZFS route up the TL of the valley from Meharry Creek was re-established by Permolat volunteers in October 2021. It is rough and unformed, crosses some actively unstable terrain, but the bush sections are cut and well marked. Fords of the Kokatahi and Crawford are required which makes it a dry-weather route only.  NZ Topo maps still has the 3-wire marked and the track going from there up the TR. 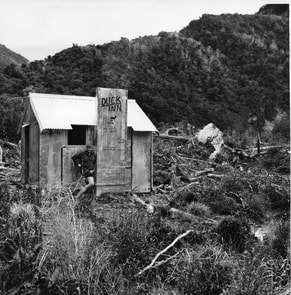 Peter Logan at Top Crawford Hut at its original site midway up the Crawford valley; circa Mid 60's
Type
The original Top Crawford Hut was sited on the bush faces midway up the Crawford Valley. The Hut was erected there by the NZFS in 1959 and was a standard S81, 4-bunk design with an open fire. The fireplace was removed by DOC around 2004. When the Hut was shifted in 2011, it was pretty much rebuilt in the process, strengthened, insulated, and had double glazed windows, a woodburner, a porch and a stepped deck added. The Hut has a toilet and water is from the River.

Condition
The hut was rebuilt using flathead nails to fasten the external iron cladding. which may be a problem longer-term when they may begin lifting. The handle on the door of the wood burner is jammed and while the door still can be opened and closed, it can't be tightly shut. There have been reports of a water leak around the flue, which during moderate rainfall gets a regular drip going. The flue cap itself is prone to letting water in directly to the fire box. The exterior paint on the rear wall is coming away, a minor issue at this stage.

Routes
There is a high-level crossing from Top Crawford basin over to the Harman River via a col just South of point 1618m. Access is via the upper fork of the Crawford that drains the faces between Mt. Lathrop and point 1618m. Head up the faces just downstream of the TL branch of this fork, up onto the flat area at 1530m, West of point 1618m. Sidle from here around to the col which has a conspicuous rock needle on its South side (this is plainly visible from down in the Harman River). A steep scree provides access from the col down into a rocky gut, which is followed into the River. Ice axes and possibly crampons may be necessary in winter and spring on this section. Once down in the Harman River it is easy travel down to the top of a gorge at the 900m contour. Further progress downriver is not possible due to waterfalls. A side-creek enters here on the TL through a grove of mountain ribbonwood, around E1462586/ N5246622 (BV19 626 466). Climb diagonally from the creek mouth, 50 vertical metres up through thick alpine scrub onto the terrace above the gorge. Head from here through scattered scrub and open tussock patches onto the low rocky ridge overlooking Harman Hut, and follow this down to where it is possible to make a bee-line through patchy scrub to the Hut. Allow around four hours for the crossing from Top Crawford Hut.

For those wishing to do a traverse of the Browning Range from Top Crawford, access is up the big unnamed side-creek on the TR lip of the basin. Follow the creek up to the 1400m mark then exit up a gut on the TL that takes you up onto the large flat bench with tarns at 1500m. Climb from here up through the rockfields onto the low point on the crest of the Range at E1458390/ N5246493 (BV19 584 465). The traverse continues over Cairn Peak to Tyndall Knob, then down Whitehorn Ridge. The old NZFS track down the Spur to Crawford Junction is very overgrown, petering out completely on the lower faces. Allow a full day and good conditions for this route. Ice axes may be necessary during the colder months.

A crossing of the Browning Range to Mid Styx Hut over Cairn Peak can also be done. From point 1858m drop due North down the broad face on the TL of the large unnamed side-creek that enters the Styx just upriver from Mid Styx. There is a forks fork in the spur around the 1280m contour. An old NZFS track can be picked up in the alpine scrub belt on the NW fork. This was recut by Permolat volunteers in 2010 and takes you down to Mid Styx Hut. Allow 5-6 hours in good conditions for the crossing from Top Crawford Hut

There is a high-level route that provides access from the head of the Crawford over the Main Divide to Hall Creek, Hall Col, or Browning Pass. The upper Crawford is relatively easy travel and access onto the Divide can be gained up the screes, or snow slopes depending on the time of year, between Mts. Beals and Learmont. Drop off on the Canterbury side down the screes (or snow slopes) into the upper basin of Hall Creek. There is a good sidle from just above the waterfall at the lip of the basin onto Browning Pass. This is probably the easiest way to get to Hall Col and Farquharson Saddle. The more direct ridge route down from Mt. Learmont has some vertical rock pitches and gendarmes lower down. Ice axes and crampons are needed for this crossing in the colder months.

Repairs
The door and ashtray handles of Little Cracker woodburners tend to be problematic and jam easily if you try and force them open. The current door needs unjamming. Some sealing around the flue may be needed. Longer-term the flatheads fasting the iron cladding could be replaced with tech screws.

Provisions on site
Two wooden bench seats, a coal bucket, hearth broom and shovel, broom, axe, bow saw, shovel, and a length of rope. There is a part used 10L bucket of paint and a wooden roof ladder under the hut.
Powered by