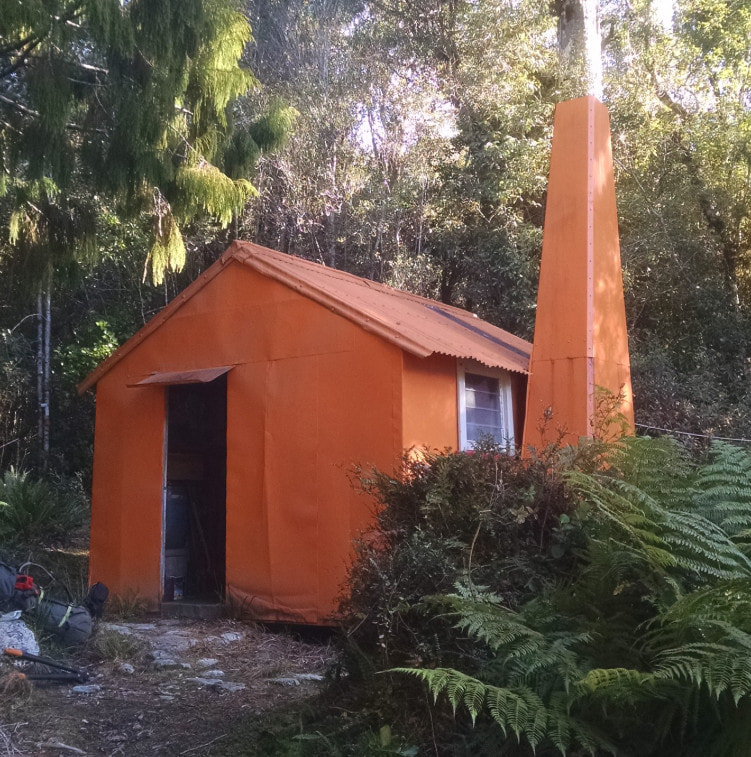 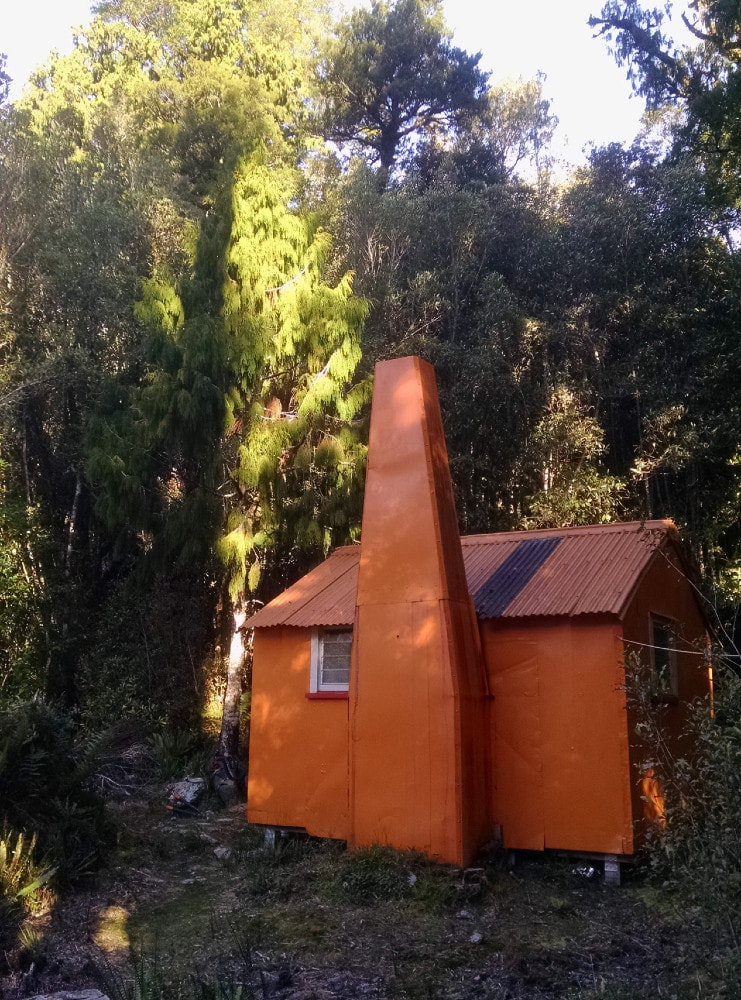 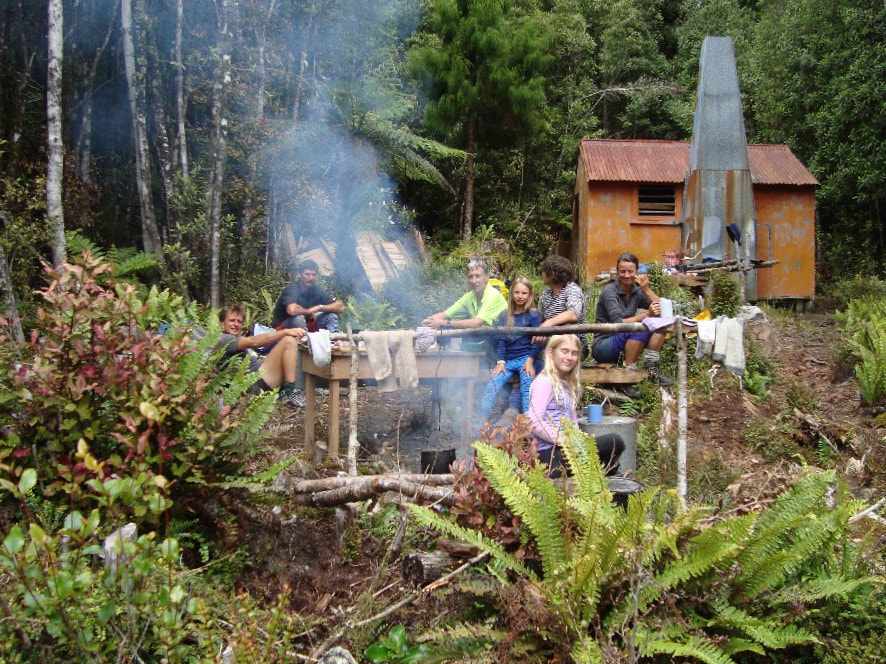 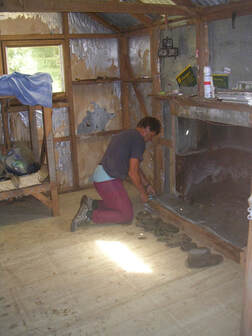 Mark Mellsop-Melssen doing hearth repairs in 2009
Maintenance Status
Mid Styx Hut is a maintain by community project. No work was done on the Hut from the 1970's until 2004 when DOC re-designated it as minimal maintenance, by which stage the piles and floor had largely rotted out. In 2009 the Hut was re-piled and re-floored by a Permolat work party led by Mark Mellsop-Melssen. The exterior was repainted in 2014. Permolat volunteers have also recut and marked the access tracks to the Hut, and a tops track behind it onto the Browning Range. When a series of major floods seriously damaged the Grassy Flat track on the TR of the Styx valley in 2019, DOC attempted to reroute it up the TL. This would have included Mid Styx in the loop, however they eventually abandoned this idea and reopened the TR route.

Location
Styx valley. Map BV19. Grid Ref: E1456688/ N5249300 (BV19 567 493). 460m altitude. Mid Styx is located on a high bush terrace midway up the TL of the Styx valley. Mature podocarp, rata, and hardwood forest surround the Hut and give it great deep-bush ambience. The bird life is prolific with tui, kakariki, pipipi, weka and ruru providing the soundtrack. The Hut is only a couple of hours from the roadend, but is usually bypassed due to being on the opposite side of the Styx River to the main valley track. Overnight visits and drop-ins to Mid Styx increased noticeably after it was profiled on this site, repaired, and had its access tracks recut.

Access
Access to Mid Styx Hut requires at least one ford of the Styx River, so the weather is always going to be an important factor for intending visitors. Currently the Styx cuts in against a shingle bluff right at the beginning of the Grassy Flats route where the old farm track ends. Ford to the TL here where DOC have converted a stoatline to a track. In many places it is quicker just to bomb up the riverbed, particularly where the track has been scoured out on sections of hillside. Climb back onto the track just below Tyndall Creek and head up Tyndall Creek for just over a kilometre (to around the 400m contour line) where a track exits on the TR and climbs steeply up onto a bush terrace. This first bit is not particularly well-marked. The track flattens at the top of the climb and continues along the terrace for half an hour to the Hut. Tyndall Creek is likely to be uncrossable following heavy rain. Allow 2.5-3 hours to reach Mid Styx from the road end.

The turnoff to Mid Styx from the upper valley is around one hours travel downriver from Grassy Flat Hut. There is a newly cut DOC track down to the River just below an unnecessary high detour around a shingle bluff.  Ford and continue down the TL to a large unnamed side-creek. The track up to the Hut climbs steeply onto the terrace on the TL of this creek. It follows the terrace edge above the creek for 20 minutes before veering West for 1/2 a kilometre to the Hut. This bit was recut by DOC in 2019.

Type
Mid Styx is a standard NZFS S81 four-bunk design with open fire, built in the 1960's. The floor, piles, joists and bearers at Mid Styx were completely replaced in the 2009 working bee, and the hearth re-concreted. The cupboard and woodbox vestibule were removed during the renovations. There is no toilet currently and water is from pools in a very small creek next to the Hut, that generally only runs after rain. The bunks are wire netting with new DOC fireproof mattresses. Mark built a small woodshed for the Hut in 2013 with materials salvaged from the renovations. Glenn Johnston and Chris Steel have been helping Mark out with the work on the Hut.

Condition
As a follow on from the 2009 maintenance Mid Styx had its exterior painted and the clearing enlarged in 2014. DOC Hokitika supplied 12 litres of orange paint through the Dulux scheme for the painting. The framing and cladding above floor level is original and surprisingly well-preserved despite the years of zero maintenance. The original fireplace was cemented on top of a pile of rocks and there are some gaps around the base that would be big enough for vermin to get in. The iron backing between hearth and chimney is rusting out. DOC consider that there is some fire-risk because of this, despite there being nothing combustible in the gap, and that it's pretty much been like this for decades. The sheet of clearlite in the roof is discoloured and past its best-by date. Take some mosquito coils if visiting in summer as the critters come down the chimney when the fire goes out. The Hut is currently rodent free, but this needs to be monitored. There is an ample supply of poison on site.

Routes
An old NZFS track 10 minutes upriver from the Hut provides access onto the Browning Range. It was reopened by Permolat volunteers in 2010, and recut and marked by Glenn Johnston and Greg Ross in February 2014. From the turnoff the track goes in a SSW direction along the TL terrace above the big unnamed side-creek. It connects with a ridge on the creek's TL and follows it up to the tussock. The top section of the track is very steep and awkward to stay on. An alternative is to sidle West into a more open gut and head up that. Allow two hours from Mid Styx Hut to the tussock. There is a good tarn and campsite there, and it takes around two hours from here to the top of Cairn Peak. 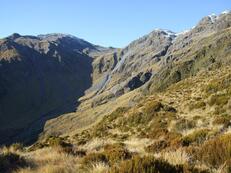 The tussock basin on the Browning Biv tops traverse: Photo Glenn Johnston 2010
It is possible to access Browning Biv using this route and then traversing the
the tussock basin in the unnanmed side-creek. Climb from the basin up onto the ridge bounding its TR and sidle at roughly 1700m around and down to Lathrop Saddle. Follow the poled route from here down to Browning Biv. Allow five hours from Mid Styx Hut to Browning Biv using this route, which is longer and more arduous if you were to use the main valley tracks.

A crossing of the Browning Range from Mid Styx to Top Crawford Hut is something fitter types may like to consider. Access is via the tops track and the basin in the unnamed side-creek. Cross the Browning Range at the low point in head of the creek (E1458390/ N5246493 (BV19 584 465)) and drop down to the cirque with tarns on the Crawford side. The tarns are usually snow covered for a good portion of the year. There is an open gut just below the bench where the tarns are that provides easy access into the creek catchment below. Follow the creek down into the Top Crawford basin. Allow 6-7 hours for the crossing in good conditions. Ice axes may be necessary during the colder months.

Repairs Needed
The hearth will possibly require some maintenance and the iron backing replaced. The external chimney cladding is OK still, but over the longer term may need some attention. A toilet will hopefully be built at some point and it has been suggested that a cowling be made for the top of the chimney. The clearlite in the roof still needs replacing and adding another sheet further along the roof would lighten the hut up considerably. The  section of track up onto the terrace from Tyndall Creek and the first section of terrace needs tidying up and marking There is a patch of regenerating scrub and fern just in front of the hut that needs cutting before it gets too big.

Provisions on site
A stool, two shovels, three food tins, a broom, an axe, a hand saw, a hearth shovel and brush, some sheets in a sealed barrel, a coal bucket, and two large pots. There is some leftover paint, paint brushes, that can be used in the future for touch-ups.
Powered by