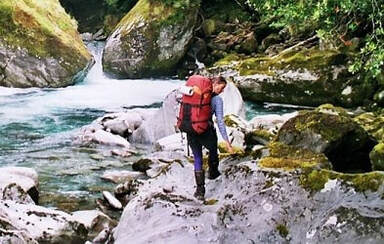 ​Translations of some of the specific jargon used on this website

Boulderhopping
This is a skill you are going to need to develop if you want to spend time in the remote hut zone. It sounds simple, but there's an art to it. Travel can be really fast as you glide from rock to rock, or it can be a slow and arduous grind. The experienced boulderhopper can see a straight path through an apparent jumble, tell a slippery rock from a non-slippery one, and a firm foothold from a loose one. Stepping or even leaping from rock to rock requires a mix of agility, strength, timing and confidence, usually with a pack on your back. Many of the routes in the remote hut zone have sections of river travel, some quite long. The size of the rocks vary also, from football to house sized. 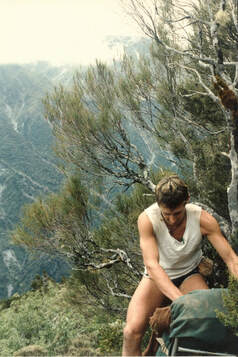 Bush-Bashing
Speaks for itself really. Travel through untracked forest, an experience that can be attained by stepping a few metres off any well-groomed track in the NZ high-country. With respect to this website, there may not be a well-groomed track to step off in the first instance, and so bush-bashing may be an essential component of the hut visit. The degree of difficulty varies according to the forest type, aspect, altitude, and terrain, and ranges from fast, easy travel under an open canopy, to crawling and worming through dense foliage. Map reading and compass skills, or GPS, are useful in some instances.

Scrub-Bashing
Usually of a more difficult order than bush-bashing and is encountered in alpine and sub-alpine regions where the vegetation is low, dense and sometimes impenetrable. It often involves crawling, and the pushing or dragging of packs, sometimes on steep and bluffy terrain. Downhill is usually better, but in the worst instances progress can be measured in meters per hour. Scrub-bashing can be demoralising, and even dangerous if energy reserves are low and the weather inclement. 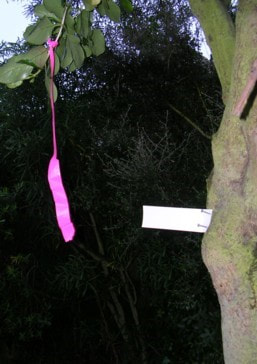 Permolat
Permolat was one of the brand names given to the aluminium strips used to make venetian blinds that were used by the NZFS from the 1960's to early 80's to mark high-country tracks. The 50mm wide slats were cut into 10-15cm lengths and nailed to the trees around eye level. White was the most commonly used colour in Central Westland, although red, or a mix of red and white was also sometimes used. Many of the tracks to huts on the Remote Huts website are marked in this way. Over time they can become obscured by moss or blackish lichen, or partially vanish into the expanding tree bark. White markers generally signify a track, while red markers going in a straight line uphill, perpendicular to the valley floor, are more likely to be old NZFS vegetation survey lines. These are not cut tracks and usually aren't going anywhere useful. They can be further identified by the presence of marked plots at regular intervals that aluminium pegs with permolat sails driven into the ground. The trees inside the plot have had their stems tagged with small aluminium tags. Don't disturb or pull out any of the markers as they are a valuable source of data on changing forest health over time.

Cruise Tape
Cruise tape aka flagging tape is the orange or red (occasionally pink or blue) surveying tape that is tied to vegetation to mark overgrown tracks or routes. It is quite durable and takes several years to break down. Wilderness purists may deem it an eyesore, while others are grateful for being able to find their way due to it. 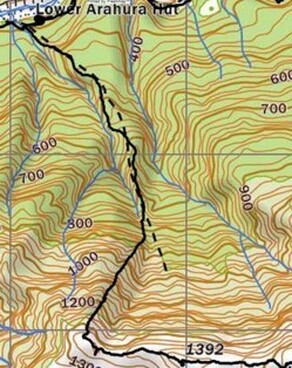 GPS or Satellite Global Positioning allows us to determine our location or the location of geographical features with great accuracy. GPS devices are a fairly standard item for many trampers and hunters these days. Some of the coordinates on the website are still Grid References estimated from the latest LINZ 1:50,000 map series. We'd like to update them with GPS coordinates and you can help us by emailing them to us when you visit a particular area.

Track
The word "track" here is open to diverse interpretations and needs to be understood in the context of the relevant hut page. It may on rare occasions refer to a well maintained and marked bench-track with bridged side streams and rivers, but is more likely to be a simple unformed trail following the lie of the land. The side-creeks on these usually aren't bridged, and some river fords may be necessary. The tracks on the website vary from well-maintained and easy to follow, to barely discernible remnants in thick or regenerating bush, or scrub, and many require an experienced eye to follow. Be prepared for plenty of ups and downs, and transitions from bush to riverbed to open tops. The main type of marker is permolat, occasionally augmented by old blazes on trees. Some of the tracks in poorer condition have been cruise-taped in places where the permolat has fallen off, where it is particularly overgrown, or where the track has been washed out, or fallen away. Orange plastic triangles indicate a fully maintain DOC track, and more likely to be found on the main valley tracks and circuits. The art of following remote tracks is a skill that takes time to learn and having done a tourist-standard track or two is not suitable preparation for a lot of the tracks and routes on this site. 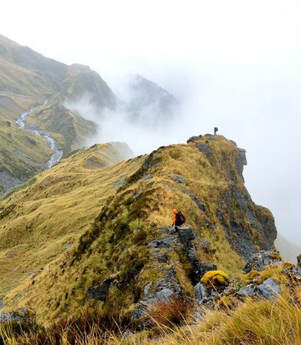 Route
The term route on the website usually refers to something that is non-tracked, although in some instances there may be minimal or rudimentary types of marking, such as cairns, tree blazes, poles, or cruise tape. It is not unusual for routes to follow natural features such as rivers, creeks or ridges, that provide the least line of resistance through a particular terrain. Snow poles are commonly found on "maintained" routes above the bushline. Routes vary considerably in difficulty depending on the terrain, altitude, vegetation, and seasonal factors.

​True Left and True Right
TL and TR indicate the left and right side of a valley or catchment when looking downstream.

Tops
A little word describing some big stuff. The open and majestic expanses of high-country that lie above the bush and scrub lines. At lower levels the open tops are vegetated with alpine grasses, herbs and mat plants, some of which have adapted in bizarre and beautiful ways to the extreme environment. These give way gradually with altitude to, fell-field, scree, rock, and permanent snow and ice. On the Coast the tussock line is generally around 1100m-1200m, but varies considerably depending on aspect, soil type and other parameters.
The weather up here is extreme and changeable. Always carry cold weather gear, even in midsummer when snowfalls can still catch you out. ​​​​
Powered by