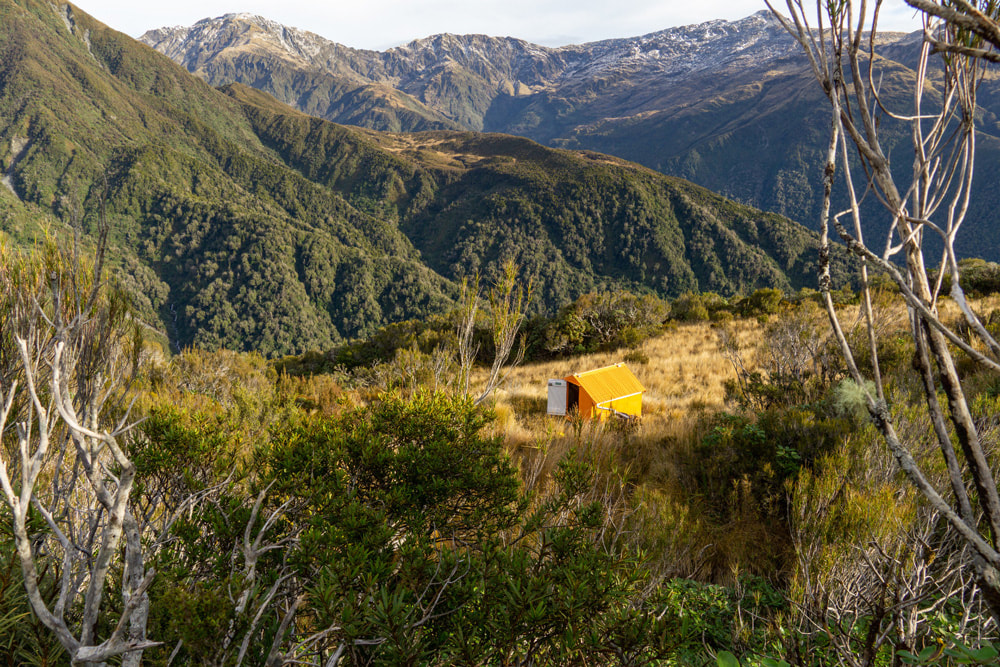 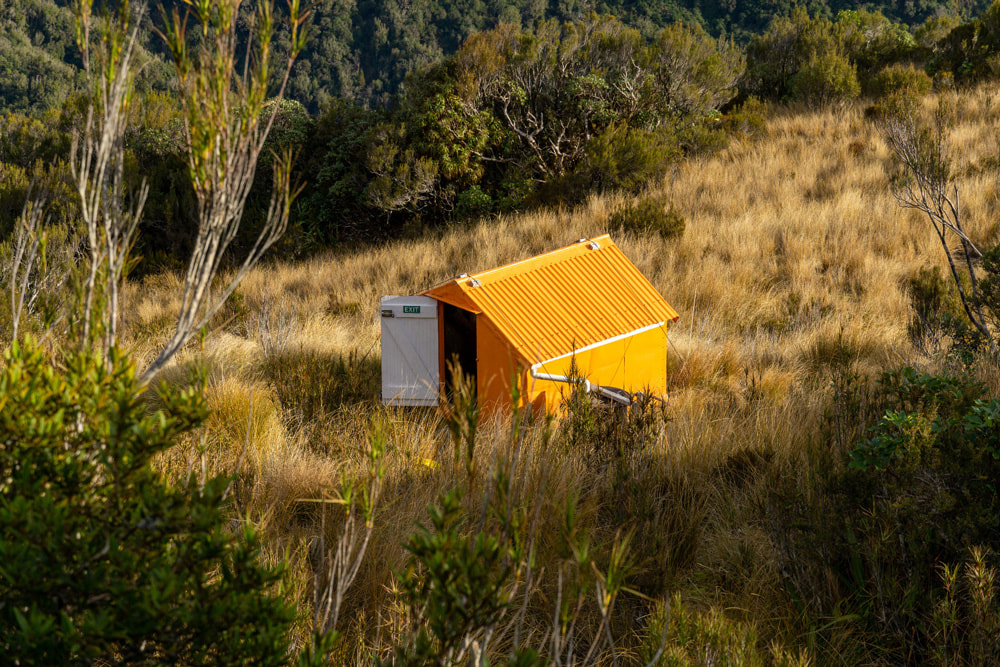 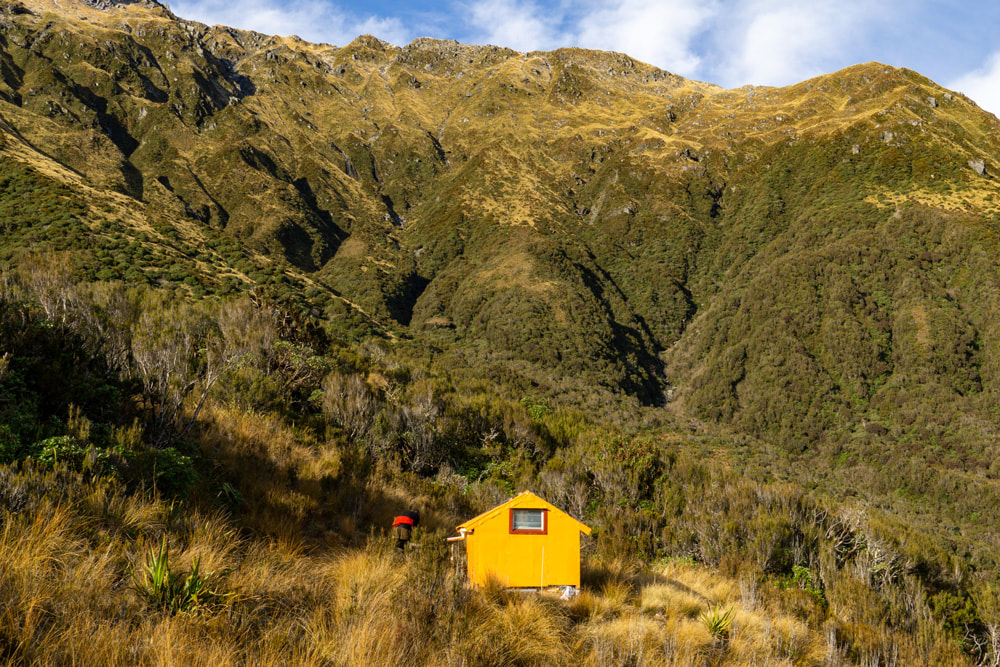 Maintenance Status
Adventure Biv, its access track from the Toaroha, and the poled route over Toaroha Range from the head of the Kokatahi valley are all fully maintained.

Location
Toaroha catchment. Map BV19. GPS Ref: E1450400/ N5240700 (BV19 504 407). Altitude 1020m. Adventure Biv is located at the top end of a tussock clearing in the scrub zone on Adventure Ridge in the Toaroha valley. Adventure Ridge separates the Median and Zit Creek catchments and there are great views from the Biv over to the Diedrichs Range. Adventure Biv is on the Zit Saddle - Lathrop Saddle circuit and gets most of its through traffic this way. It is used less frequently by folk doing traverses of the Toaroha Range from Pinnacle Biv, and pre Covid there was been a big increase in day-trippers, or overnighters coming up from Cedar Flat Hut in the Toaroha valley. These were mostly overseas visitors who seem to have discovered Cedar Flat on their search engines.

Access
Adventure Biv can be accessed in a day from the Toaroha roadend by reasonably fit persons. The turnoff to it is 50 metres upriver from Median Creek, or about 20 minutes up the Top Toaroha track from Cedar Flat Hut. The track climbs steeply from the River up onto a bush terrace and follows this for a bit before veering up Adventure Ridge. It is a steep climb from here to the Biv. DOC gave the track a trim in 2018. Allow around two hours to reach the Biv from Cedar Flat, or 5-7 hours from the Toaraoha roadend.

Access from the Kokatahi valley is via a poled route that crosses the Toaroha Range just North of Zit Saddle. The route begins in the unnamed side-creek draining Zit Saddle, which is 50m downriver from Top Kokatahi Hut Follow the creek up to just below a small waterfall around the 1350m contour. Poles lead out of the creekbed here and up a gut on the TL. Follow these up onto the crest of the Toaroha Range and directly over and down the steep tussock faces on the Toaroha side. The crossing point is marked incorrectly on NZ Topo Maps and is actually 300-400 metres further north along the Range than indicated. The top section of the Toaroha descent is steep and slippery, and the markers are not easy to follow in thick cloud. They lead onto a rib which flattens somewhat as it nears the scrubline, and a short section of track leads through the scrub into the upper TR branch of Zit Creek. Cross the Creek and follow the poles and markers across a scrubby face with open tussock patches to Adventure Ridge. This section is more lightly marked and requires a bit of care to stay on. A short section of cut track leads down Adventure Ridge through the alpine scrub to the Biv. Allow 3-5 hours in good conditions for the crossing from Top Kokatahi Hut. Ice axes should be carried during the colder months on the steeper pitches near the top of the Range.

Type
Adventure Biv is an NZFS B55 two-person design built in 1964. It has a corrugated iron roof and a single louvre window at the far end. One of its two original wooden sleeping platforms was removed during renovations in 2004. There are two mattresses in the Biv. A small roof-fed tank installed in 2004 provides water, and there is a small, mossed-over tarn just up the slope from the front door. There is no toilet.

Condition
Adventure Biv is in top condition currently. In 2016 DOC removed the roof and end walls, reframed, papered, re clad and sealed the Biv. A new window was fitted and the whole structure painted. The vegetation around the Biv was cut back. The door jams currently and you need something to prise it open with.

Routes
For the more experienced there is a traverse of the Toaroha Range to PInnacle Biv that is reasonably straightforward in good conditions. Head up the track above the Biv to where it veers off the ridge towards Zit Creek. Continue up towards the summit of Mt. Reeves as far as a bench around the 1500m contour, then sidle North. Pick up the crest of the Range just before it drops to the low point South of point 1618m. The large flat area here is followed by narrow section with a couple of small points that need sidling around. Continue along to Genoa Peak and drop down its main eastern spur to Crinkletop. There are some nice tarns just before Genoa Peak. An alternative to traversing Genoa Peak is to drop from the low point South of Genoa Peak down a series of benches into the high basin in the head of Alice Creek and climb directly from here up onto Crinkletop. Alternately, The Biv is to the South of, and slightly below the Crinkletop summit, and is easy to walk past if the visibility is not good. Allow 4-6 hours to get from Adventure Biv to Pinnacle Biv. Ice axes should be carried in winter and spring, and crampons would be helpful on a few of the steep bits if the snow was icy.

Travel South along the Toaroha Range from where the poled route from Kokatahi crosses over is mostly pretty easy in good conditions. There is a narrow section of ridge just South of Zit Saddle that needs to be sidled on the Kokatahi side. The slopes are steep here and care is required in wet or icy conditions. Recently, and with the increased popularity of this traverse, a few parties have found this bit too exposed for comfort. It shouldn't be a problem for those confident with heights, but take a rope if you are unsure. The terrain flattens again at the 1600m mark and Crystal Biv and Yeats Ridge Hut can be accessed down the prominent side-spur running West from point 1694m. A steep section of the spur at around 1400m can be sidled around on the Zit Creek side. The spur flattens and forks at the 1300m contour and the NW fork takes you down to Yeats Hut. There are a few waratahs and stakes (the top waratah is at E1449761/ N5238689 (BV19 498 387)) leading to a cut and marked trail down a scrubby face. The route veers North from the bottom of the face through scattered scrub and open tussock patches to a low ridge bounding Zit Creek which has a few short sections of track through the scrubby bits. Drop off the ridge where indicated and cross the open basin below to the Hut, which is clearly visible from most of the route down.

Crystal Biv is accessed down the SW fork of the spur and is visible from the 1200m mark. It is easy, open travel down the spur with a bit of scattered scrub to negotiate by veering North just above the big tarn next to the Biv. Allow 5-6 hours in good conditions from Adventure Biv to either Yeats Hut, or Crystal Biv.

Top Toaroha Hut can be reached by continuing South along the Range and dropping into the top basin of Chamberlain Creek. Exit on the TL at the basin's lip, just above the waterfall and sidle across the western faces of Mt. Bannatyne to an obvious open side-creek that provides easy access down to Bannatyne Flat. Allow 6-7 hours for the traverse in good conditions.

Mungo Hut can be accessed from the low point between Mt. Chamberlain and Mt. Bannatyne. A vertical section of ridge South of Chamberlain can be avoided by sidling around some rock benches on the Park Stream side. Drop from the low point into the steep gut below, and follow this all the way down into Park Stream. The top of the gut is steep and eroding and is snow-filled for most of the year. It can be icy near the top in colder weather and ice axes and crampons should be carried at these times. Once in Park Stream it is an easy boulderhop downstream to the start of the access track up to Mungo Hut. The entrance is cairned and marked on the TL bank, and a steep 15 minute climb from here to the Hut. The track was recut by volunteers in 2010. Allow 6-8 hours from Adventure Biv to Mungo Hut.

Repairs needed
The door needs planing so it doesn't jam.

Provisions On Site
A hand brush and shovel, a broom, and a billy. There is a 2m length of 6x1" plank under the Biv.