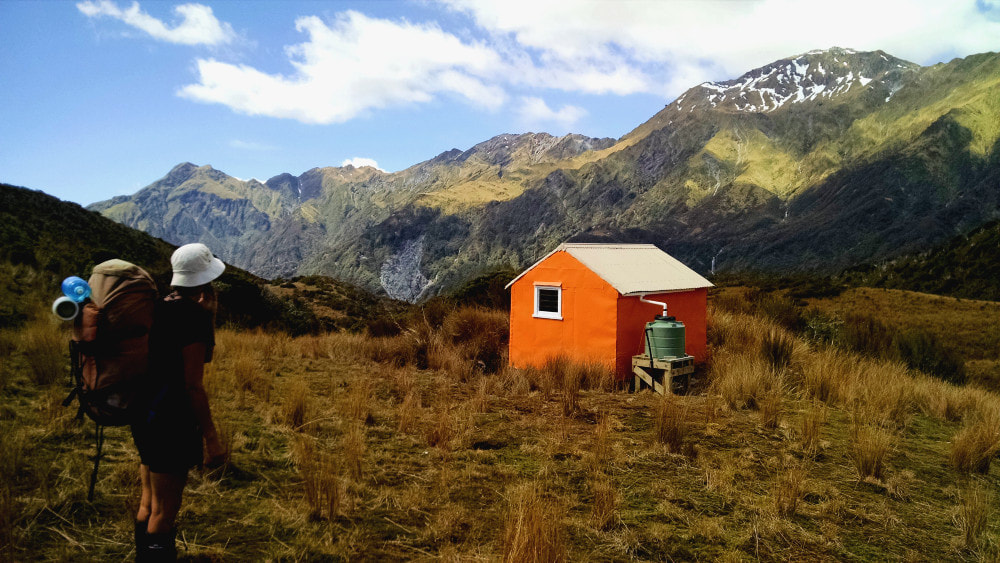 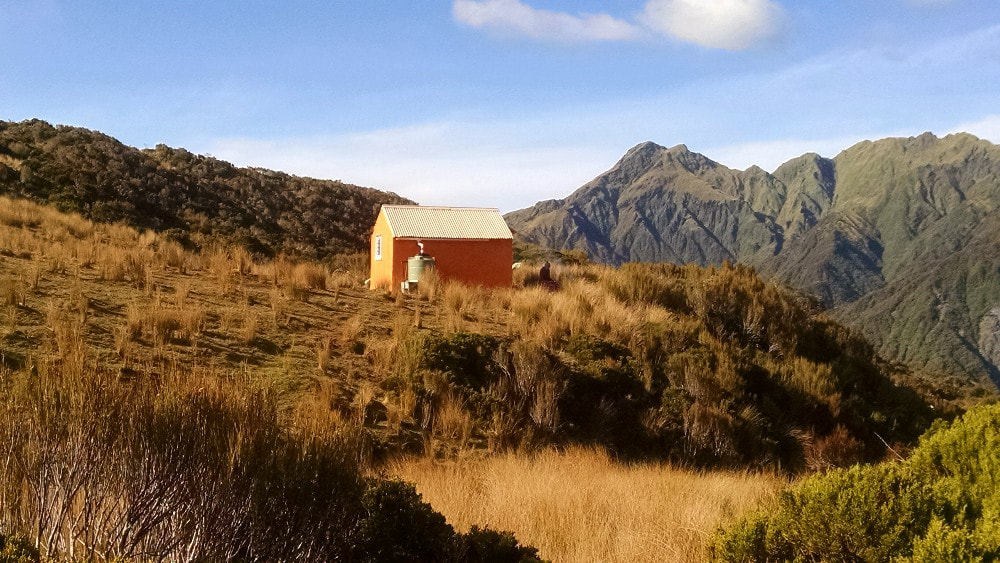 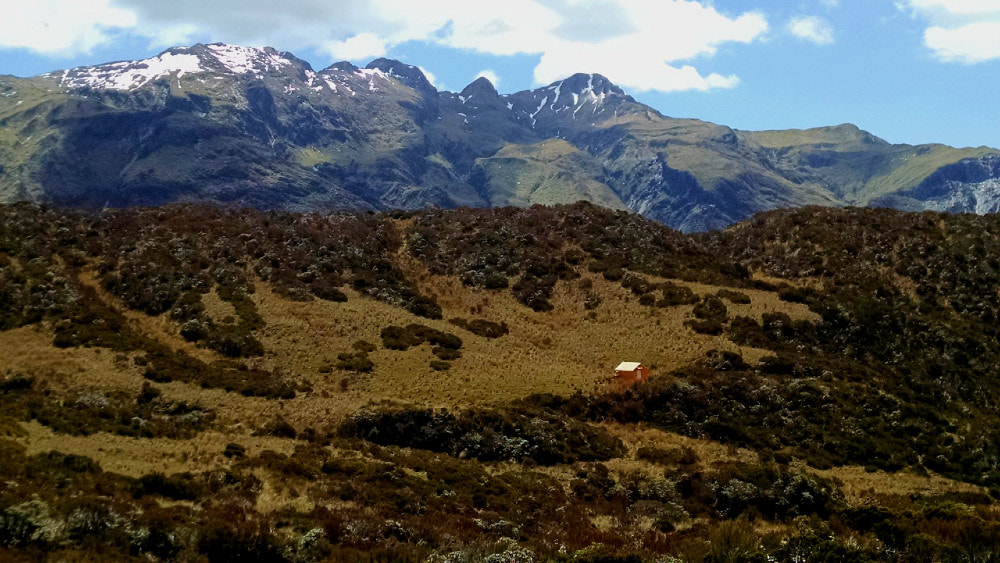 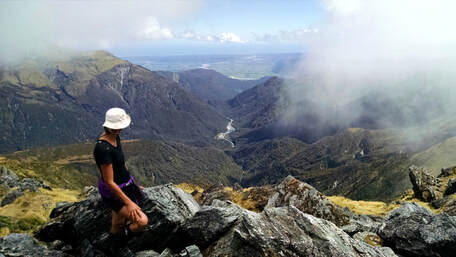 Looking down the Toaroha from the tops above Yeats Ridge.
Maintenance Status
Yeats Ridge Hut is designated as minimal maintenance and the track to it from the Toaroha valley is volunteer maintained. Liz Wightwick of Christchurch has taken an interest in it and she and some of her CTC friends have done a few outings on it. Back in 2014 a watertank was installed at the Hut as part of a Permolat/ DOC collaboration. In 2016 Paul Reid of Permolat received some High Country Consortium (now BCT) funding and carried out additional maintenance. More is needed but has been delayed by some confusion and dithering around volunteer vs DOC input. Something needs to be sorted as there is water getting into the Hut under the door and from a leak in the ridging.

Location
Toaroha catchment. Map BV19. Grid Ref: E1449075/ N5239244 (BV19 491 392). Altitude 970m. Yeats Ridge Hut is located on a flat section of ridge dividing the Zit Creek and Toaroha catchments. The surrounds are alpine peat bog with scattered scrub and open patches of tussock with views out over the Toaroha valley. Yeats can be done as an overnighter from the Toaroha roadend, or day-trip from Cedar Flat Hut down in the main valley. Access from Yeats onto the Toaroha Range is relatively straightforward and there are good tops routes to a number of other remote huts and bivs in the area. Visits have increased markedly since Covid going from a 20 to average 33 recorded visits per year. with growing interest in the longer tops circuits, particularly a loop incorporating Crystal Biv.

Access
The Yeats Ridge track turns off from the Top Toaroha track on the TL of Zit Creek, 30 minutes up the from Cedar Flat Hut. Zit Creek can be difficult or uncrossable after heavy rain. The track climbs from the turnoff onto a terrace, follows this briefly, then climbs again steeply up the lower bush faces of Yeats Ridge. It flattens briefly in the montane zone, then climbs again through the sub-alpine zone to a flat bench at 940m with open tussock patches and tarns. This is followed for just under a kilometre, to a low scrubby rib that is crossed to reach the Hut. The open sections are marked by wooden stakes and permolat. The track was most last trimmed  by Liz's CTC crew in October 2021. It is in good nick but could do with a bit more work on some of the smaller regen. Allow 2-2.5 hours to Yeats Hut from Cedar Flat Hut, or 6-7 hours from the Toaroha roadend.

Type
Yeats is an NZFS S81 four-bunk design built in 1960. The cupboard alcoves were removed at some point to create more space, and the bunks realigned along one wall. Yeats has no fireplace, woodburner, or toilet, and is unlined. A watertank was installed by Permolat volunteers in January 2014.

Condition
Yeats Ridge Hut blew off of its piles in the early 1980's and lay on its side until righted and repaired by the NZFS in 1984. It was painted and resealed by DOC in 2004. The Hut was repainted by Permolat volunteers when they installed a roof-fed watertank in 2014. The doorstep was repaired and loose purlins, other timbers and iron secured. DOC supplied the paint, the watertank and stand, and flew the materials to the Hut. Permolat contributed funding for the materials not supplied by DOC. In April 2016 Paul Reid and friends made a new door flashing, put in a new door step, took in a new mattress, and surveyed a site for a toilet. The door flashing hasn’t worked and water still blows in under the door. The studs and floor plates on either side are damp. There is a roof leak in the centre of the Hut, probably along the ridging somewhere. The clearlight on the roof has torn around one of the roof nails and is lifting in the wind and will possibly be letting water in when it is blowing and raining. The paint on the door and window frames is flaking quite badly. The tussocks around the hut are getting pretty big and don't allow for much free movement around it.

Routes
The Toaroha Range tops can be accessed from Yeats Hut up the prominent spur that divides the Zit and Crystal Creek catchments. The spur forks at the 1300m contour and the SW fork can be used to access Crystal Biv. The spur is accessed across the basin below the Hut. Small wooden snow stakes are followed through patchy scrub to a low ridge bounding Zit Creek. A trail leads South along this to a broad face at the foot of the main spur. Permolat, then the odd warratah, mark a trail up through a band of alpine scrub to a flat bench with tarns at 1300m. A side-spur that drops off in a SW direction provides access down to Crystal Biv. It is open easy travel down to the Biv which is visible in fine weather from around the 1200m mark. A band of scattered scrub above the Biv can be negotiated by veering North around the big tarn. Allow 1.5 hours to get from Yeats Hut to Crystal Biv.

Top Kokatahi Hut can be accessed by continuing up the main spur onto Toaroha Range. A short bluffy section of ridge around 1400m can be avoided by sidling on the Zit Creek side. Head North along the crest of the Range to around E1451479/ N5239437 (BV19 515 394), and drop down the tussock faces into the head of the Kokatahi River. Boulderhop from here down to the Hut. Ice axes may be necessary on some of the steeper bits on the Kokatahi side during the colder months. Allow four hours for the crossing in good conditions.

Mungo Hut can be accessed by heading South from point 1694m along to Mt. Chamberlain. A short vertical pitch just South of Chamberlin can be avoided by sidling around some rock benches just below the summit on the Park Stream side. Access into Park Stream is down steep scree from the low point between Mts. Chamberlain and Bannatyne. The top section of the gut is steep and eroding, is snow-filled for most of the year, and can be icy near the top. An ice axe and crampons should be carried during the colder months for this bit. Travel down the Park is straightforward to the start of a track on the TL near where the Stream veers SW. This enters the bush and climbs steeply for 5-10 minutes up to Mungo Hut. It was recut in 2012 by volunteers. Allow 5-6 hours from Yeats Hut to Mungo Hut in good conditions.

Adventure Biv can be accessed from Yeats Hut by continuing North along the Toaroha Range. There is a narrow section of ridge just before Zit Saddle that needs to be sidled on the Kokatahi side. The slopes are steep here and care is required in wet or icy conditions. Recently, and with the increased popularity of this traverse, a few parties have found this bit too exposed for comfort. It shouldn't be a problem for those confident with heights, but take a rope if you are unsure. Continue from the Saddle to where the poled route from Top Kokatahi Hut crosses over (around E1451380/ N5240035 (BV19 514 400)). On the Toaroha side the poles lead down a steep tussock face then down a narrow rib. This is followed by a short section of track through a band of scrub into the upper TR branch of Zit Creek. The route exits the TR of the Creek and sidles across a face with patchy alpine scrub onto Adventure Ridge. There is short section of cut track down the Ridge through the alpine scrub to the Biv. Don't try dropping down into Zit Creek directly from Zit Saddle unless you have a rope and a spare day up your sleeve. Allow five hours for the trip from Yeats Hut around to Adventure Biv. Ice axes should be carried for back-up during the colder months.

Repairs Still Needed
The clearlight panel and roof ridging needs replacing pretty urgently. A way also needs to be found to stop rainwater driving in under the door. A small porch would probably be the best solution and a DOC/ BCT team who flew in for a recce seem a while back were in agreeance with this. Paul Reid wants to replace the roof, clearlight, ridge capping, barge flashings, install building paper and replace the rotten framing with H3.2. Many of flat head nails that secure the wall cladding and the roof will be secured with tech-screws. The door and window frames need repainting. A toilet has become a necessary given Yeats' increasing level of use, and the fragility of the surrounding peatland. The tussocks around the Hut, particularly the door, need clearing back.

Provisions on Site
A shovel, a broken spade, a hearth shovel and broom, a full-sized broom, a hand basin, a camp oven minus lid, and a small billy. There are two spare louvre panes under the end bunk, a bench seat, a 20 litre water bucket, a bucket of tools (hammer, hacksaw blade, sealer and gun), some downpipe, paint, sugar soap, brushes, sandpaper, lengths of 4x2, various nails and screws and some permolat.
Powered by