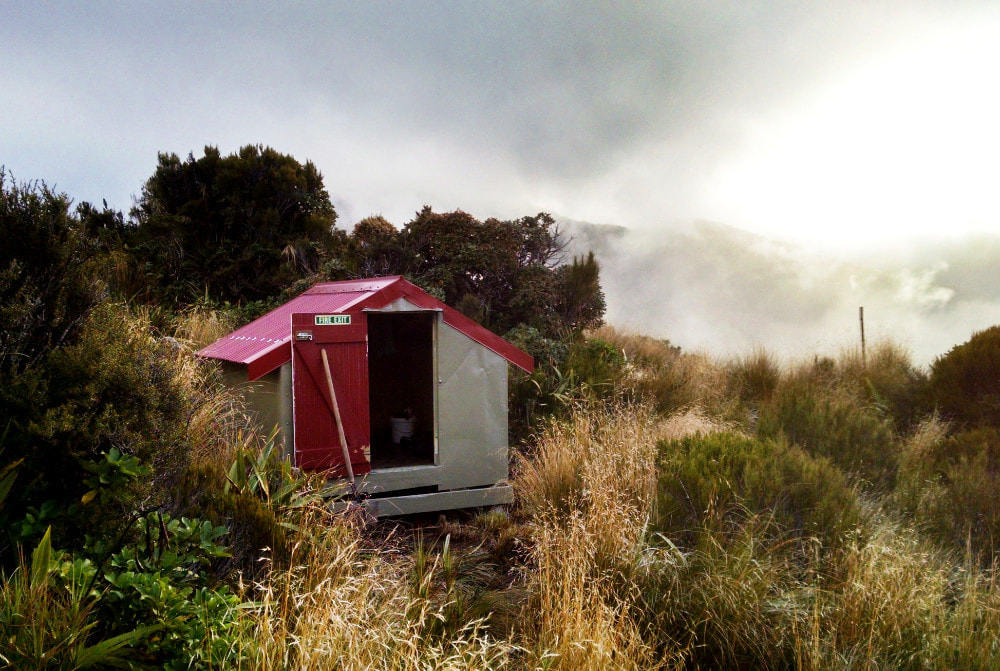 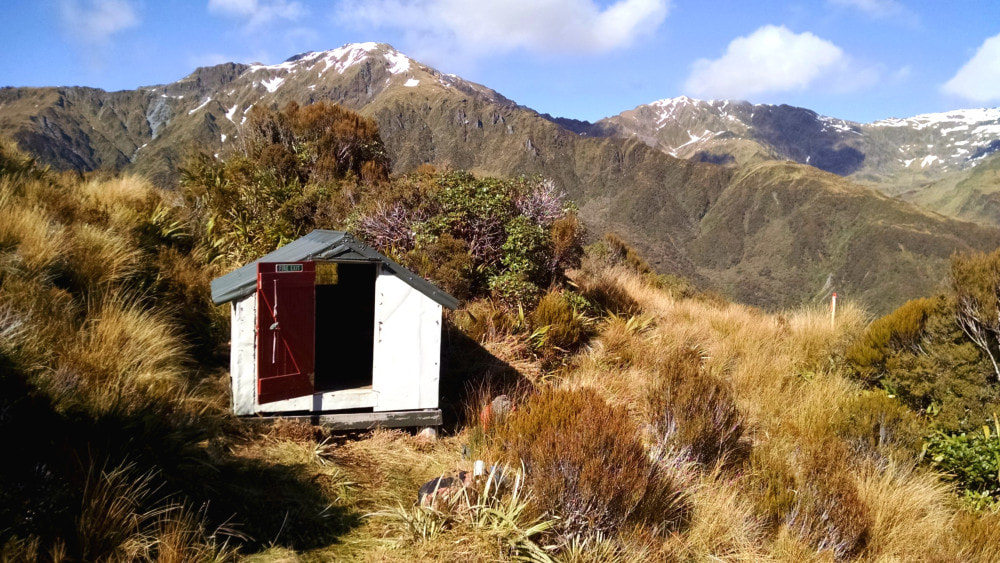 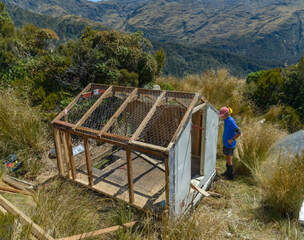 Crystal rebuild 2019
Location
Toaroha valley. Map BV19. Grid Ref: E1449410/ N5237943 (BV19 494 379). Altitude 1070m. Crystal Biv is located on the spur that divides the Pretty and Crystal Creek catchments of the Toaroha. It is a beautiful spot with a large picturesque tarn and great views out over the main valley to the Diedrich Range. The Biv can be accessed from the Toaroha roadend in a day by a fit party, either via the main-valley track, or over the tops from Yeats Ridge Hut, the latter being the slightly quicker of the two in good conditions. Prior to 2004 Crystal was only getting one visit every 2-3 years, increasing to around three per year after the Biv was profiled on this website. After a rebuild by volunteers in 2019 traffic increased significantly, and again after covid when Kiwis lacking overseas options started hitting the remote high-country in greater numbers. In 2021 a record 20 visits were logged. There is limited cell phone reception from near the Biv.

Maintenance Status
Crystal Biv was designated as minimal maintenance by DOC in 2004, but by that stage is was starting to have major issues at the back end due to leakage around the window. The newly formed Permolat Group started taking an active interest in it around this time as well as the old NZFS track up to the Biv that hadn't been maintained for over 30 years. Up until then the very infrequent visits to Crystal were over the tops, mostly from Yeats Ridge. In 2009 Permolat members recut the track and started doing some intermittent maintenance on the Biv itself. I did some framing and floor repairs to the back end in 2014, but they weren't enough to stop water getting into the structure. In February 2019 Rob Brown arranged a major overhaul using Back Country Trust funding and the Biv is now in excellent condition, and should remain that way for many years to come.

Access
The track up to Crystal Biv was recut and marked again in February 2019 and is in good condition. It turns off the main Toaroha valley track at the top of a steep section just upriver from Pretty Creek. From Cedar Flat Hut to the turnoff takes around 2.5-3 hours, then it's 1-1.5 hours straight uphill to the scrub boundary. From here there is a short diagonal climb marked by warratahs and snow stakes to the Biv. Allow 8-9 hours if coming from the Toaroha roadend.

The tops route to Crystal Biv via Yeats Ridge Hut is probably a bit shorter than the valley route if conditions are good and more rewarding scenery-wise. The route drops west into the shallow basin below Yeats Hut and follows some wooden snow stakes up onto the low scrubby ridge bordering Zit Creek. The trail climbs south along the ridge to a broad face at the foot of a prominent western outlier of the Toaroha Range. A marked trail leads up the face through a band of alpine scrub onto a side-spur at the 1200m mark. Warratahs lead from here up onto to a flat bench with tarns around 1300m. The descent to Crystal is down SW fork of the main spur and is easy travel. The Biv is visible in fine weather from around 1200m. A band of scattered scrub at the bottom of the descent is best negotiated north of the tarns. Allow 1.5 hours to get from Yeats Hut to Crystal Biv, or 8-9 hours from the Toaroha roadend. Snow during the colder months may significantly increase travel times on the tops sections.

Type
Crystal is a NZFS B55 two-person design built in 1960 according to Bill Johnson who helped build it, Adventure Biv, and Yeats Ridge Hut. It originally had two sleeping platforms which have since been removed. There are now two mattresses and the Biv has been modified somewhat by replacing the end louvre window with a single pane double glazed one, adding interior ply lining, increasing the frame bracing, and adding roof flashings. Water is from some small tarns close by the Biv. There is no toilet.

Condition
Crystal Biv didn't receive any maintenance from the early 1970's when under NZFS tenure, until 2004. Leaks at the end wall around the window had rotted out parts of the floor and some of the internal framing. DOC replaced some of these and repainted and sealed the Biv in 2004. The sealing at the window end was ineffective and moisture continued to get in, so by 2014 the studs and floorboards at the back end had rotted out again. I did some basic repairs in 2014, replacing the rotting bits. The 2019 work amounted to a complete overhaul, comprising replacement of the roof, all rotten framing, the iron wall cladding, and end window. An internal ply lining was installed and the last remaining sleeping platform was removed. The rebuild crew were Rob Brown, Ted Brennan, Kennedy Warne, Joke de Rijke and myself. The last bit of finishing work was carried out by Mike Lagan of Permolat when he flew in to do some hunting with a mate in April. He replaced the piles, added an additional one under the door, sanded and laminated the floor, and installed small cooking bench. He added framing to the end walls and in addition to all the stainless pan head screws, there are 4x 75mm bugles attached through the ply into the framing. This would make it quite difficult to remove should anyone be so inclined. Thanks Mike.

Routes
Access to Top Kokatahi Hut via the Toaroha range is up the spur directly behind the Biv. A steep section at around 1400m can be sidled around on the Zit Creek side. Once on the crest of the Range, head North from point 1694m to a point around E1451479/ N5239437 (BV19 515 394) and drop down the tussock faces into the upper Kokatahi. Follow the riverbed down to the Hut. An ice axe may be necessary on some of the steeper bits on the Kokatahi faces during the colder months. Allow four hours for the crossing.

Adventure Biv can be accessed by continuing along the Toaroha Range. There is a narrow section of ridge just before Zit Saddle that needs to be sidled on the Kokatahi side. The slopes are steep here and care is required in wet or icy conditions. Recently, and with the increased popularity of this traverse, a few parties have found this bit too exposed for comfort. It shouldn't be a problem for those confident with heights, but take a rope if you are unsure. Continue past Zit Saddle to where the poled route from Top Kokatahi Hut crosses over and drops down a steep tussock face onto a narrow rib on the Toaroha side. The rib is followed to where it flattens and widens and a short tracked section leads down through a band of alpine scrub into the upper TR branch of Zit Creek. Cross and climb up onto the Creek's TR terrace and follow the poles and markers downhill a short distance. The trail then veers North across scattered scrub and open tussock to connect with Adventure Ridge. A short section of track leads down the ridge through the alpine scrub to the Biv. Don't try dropping into the Toaroha directly from Zit Saddle unless you have a rope and a spare day up your sleeve. Allow 5-6 hours for the trip from Crystal to Adventure.

Mungo Hut can be accessed by heading South along the Toaraoha Range. There are no tarns on this section so carry some water. A vertical bit on the Range just South of Mt. Chamberlain can be sidled around on the Park Stream side. Access into Park Stream is from the low point between Mts. Chamberlain and Bannatyne. Drop down a steep gut below this into head of Park Stream. The top section of the gut is steep and eroding, is snow-filled for most of the year, and can be icy near the top. An ice axe and crampons should be carried during the colder months for this bit. Once in the Park it is easy travel down the riverbed to the start of an old NZFS track on the TL. It enters the bush where the Stream veers SW, and climbs steeply up to Mungo Hut. The track is not marked on the current topo map, but was recut by volunteers in 2012. Allow 5-6 hours from Crystal Biv to Mungo Hut.

It is also possible to access Top Toaroha Hut over the tops from Crystal Biv. Head up the spur behind the Biv to just above the 1100m contour, then drop down the first steep open tussock gut into Crystal Creek basin. Follow the Creel down to around 960m then sidle out due South through open tussock patches towards the ridge bounding the TL of the basin. Head up onto the ridge via the side spur with the more obvious open tussock patches. There are a few unavoidable bands of alpine scrub to bash through on this section. Once on the main ridge follow it down past where it veers South. The Hut is visible directly below from 1100m. At around the 1050m contour a steep open, freshly blown-out gut can be picked up and followed all the way down to Bannatyne Flat. Allow 2-2.5 hours to get from Crystal Biv to Top Toaroha Hut in good conditions.

Provisions on site
Some replacement piles, a plastic bucket, a plastic basin, an aluminium wash basin, a camp oven, a small pot, a shovel, a small quantity of permolat and nails and some rat poison, a sleeping mat and a fold- out chair. There is a roll of No.8 wire, some chicken wire, and some odd bits of timber underneath the Biv.
Powered by