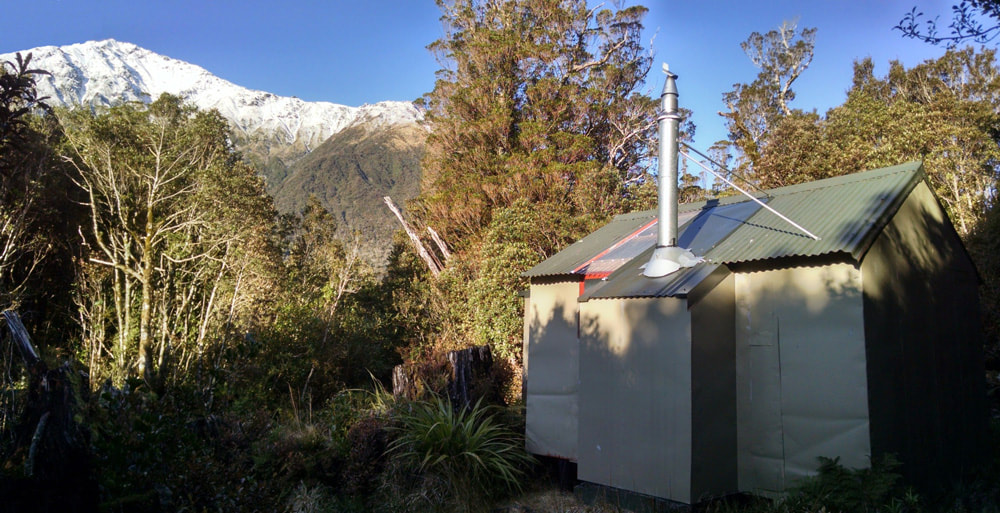 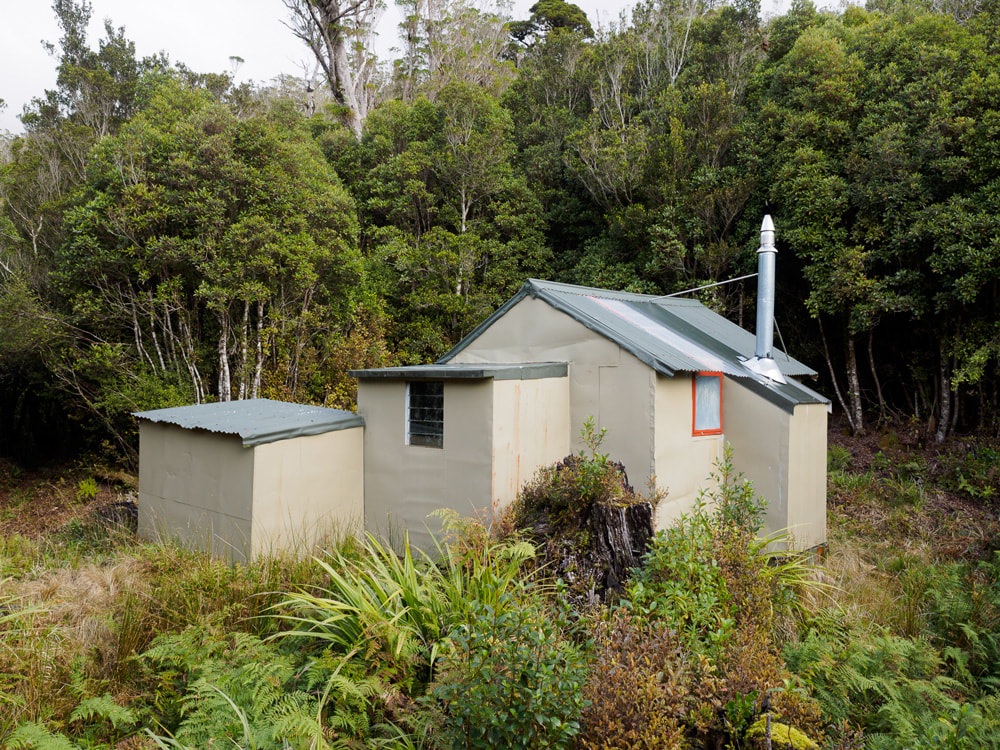 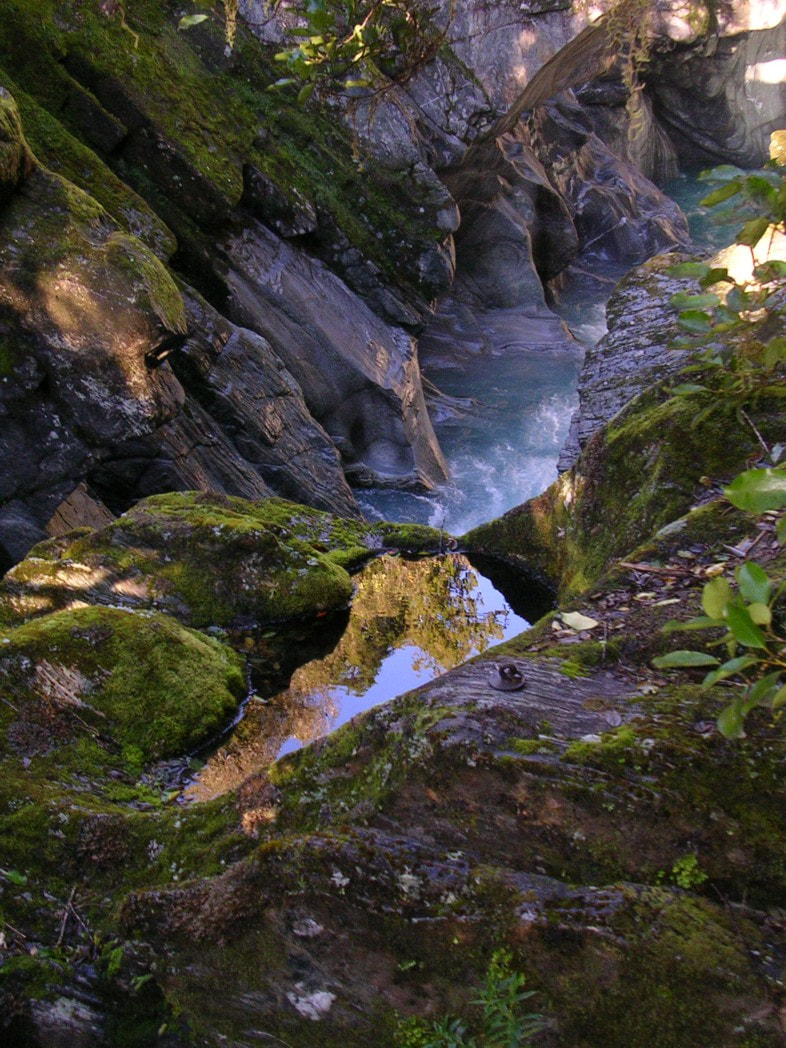 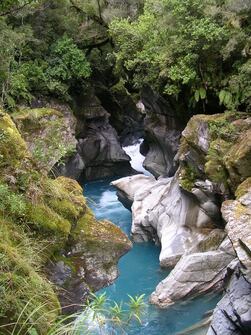 Whakariria Gorge - Photo Andrew Buglass
Maintenance status
Boo Boo Hut is a DOC minimal maintenance structure. The Boo Boo and Pinnacle Biv tracks and the tracked and sections on the upper valley route to Crawford Junction Hut have been maintained by volunteers for a considerable time now. The last track check and windthrow work was done in November 2021.

Location
Kokatahi catchment. Map BV19. GPS Ref: E1452973/ N5245567 (BV19 530 456). Altitude 594m. Boo Boo Hut is located in the rata belt on the bush faces high on the TL of the Kokatahi valley. The story is that its name originates from a cocked-up food drop in the 1950's at a deer culler's camp at the future hut site, however the NZMS13 map from 1919 already has a Booboo Creek named at the same spot. Visitation to Boo Boo dropped off in the 1990's and 2000's due to deteriorating track conditions. It is starting to get a bit more traffic now the word is out that the tracks in the lower Kokatahi are being looked after again. It receives around 30+ visits a year, often as a stopover an increasingly popular Toaroha Range traverse via Pinnacle Biv.  Boo Boo's sunny aspect and woodburner make it great all seasons overnight option.

Access
Access to the start of the Boo Boo route is up a farm trail that turns off the Toaroha valley access road just before the Kokatahi Bridge. The landowner Terry Sheridan needs to be contacted before crossing his land. The farm track peters out just before the site of an old cableway at a bend in the Kokatahi River. The River is followed from here for 15 minutes to a large grassy flat further upstream. A track enters the bush at the top of the flat and follows the TR of the Kokatahi to the Whakarira Gorge The view of the Gorge from the bridge is stunning and worth a visit in its own right. Flood debris is occasionally found jammed under the bridge and gives an indication of how high the River can get after heavy rain. The bridge is incorrectly marked on NZ Topomaps (see above) and is actually just past the next small side creek upstream on the TR. After crossing the bridge the track sidles above the TL of the gorge and drops back to the riverbed at Adamson Creek. There is a 200m stretch of river travel before the track re-enters the bush and climb/ sidles up around the bush faces to the Hut. The top end of this section is also incorrectly marked on current topomaps (the actual line is marked in red above). A fit party should be able to get from the track start to Boo Boo in 3.5 to 4 hours.

A clearing at the Pinnacle Biv turnoff five minutes before the Hut provides helicopter access. 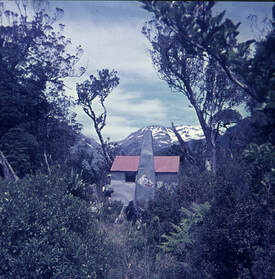 Boo Boo Hut 1974
Type
Boo Boo Hut was in the first batch of NZFS 4-bunk S81 designs built in 1959 and had an open fire and perspex windows. A woodshed and covered porch were added and the Hut lined in the early 1980's when Lands and Survey were looking after the valley. The fireplace was removed and replaced with a Little Cracker wood burner in 2012. There is a toilet and water is from the creek next to the Hut.

Condition
Boo Boo had some of its joists bearers and piles replaced at some point, but still has a pretty wonky uneven floor. In 2004 DOC repainted the Hut and cleared a bit of the scrub around it. In 2012 more exterior painting was done, the clearlite on the roof replaced, and the woodburner installed. The Hut is super cosy now with the burner going, although the lever on the ash tray door is angled and tends to jam. A broken latch on the North window was replaced in 2017, but there needs to be one on the other side as well to secure the window properly. The sill beneath is rotting and will need replacing at some point. There is a small leak in the centre of the porch roof where the studs meet and a rust patch on the external wall above where the porch meets it. The external iron cladding on the South end is streaked with red algae. There may be a small roof leak around the flue as there was a damp patch on the woodburner last time we visited. There was light rain during the visit but no water came in then. Some of the regenerating bush on the NE side of the hut site was cut back recently, but more needs to go.

Routes
Official maintenance of the route from Boo Boo to Crawford Junction Hut ceased sometime in the 1980's. In the ensuing years this part of the valley achieved considerable notoriety for its roughness, with accounts aplenty of epic trips in the Boo Boo and Crawford Junction hutbooks. Permolat volunteers reopened the track from Boo Boo to the Twins swingbridge in 2005, and some of the bluff detours on the TR from the the 3-wire that replaced the bridge to the Junction were cut and marked in 2017. Unfortunately, the 3-wire was badly damaged by a slip and removed by DOC in July 2021. In the late 1950's NZFS had tracks up both sides of the valley, but the TL one wasn't kept maintained and had pretty much vanished back into the bush by the 1980's. In September I went in and cruise-taped a route as close as possible to the old trackline, even managing to find a few bits of the original permolat here and there. Four of us went in and recut and marked the bush sections of the route in October. The re-established track is rough and unformed, but well marked. It crosses some actively unstable patches, and has a few sections of boulder travel. I finished off three small bush detours from the Crawford confluence up to the Crawford Junction cableway in November. NZ Topo maps still has the 3-wire marked and the track going from there up the TR.

From Boo Boo the track sidles across the bush faces for a half hour or so to some dry rocks, the larger and more weatherproof of which is 20m uphill from the track. I moved a plastic water barrel from further down the track so there's a bit of water there. The track drops from the rock bivs in a series of steps into Pinnacle Creek, then up and over a narrow rib into Alice Creek. It crosses another rib into Meharry Creek and up onto the terrace and clearing where Twins Hut used to be. The re-established route starts here dropping steeply off the terrace and angling down a steep overgrowing slip into the Kokatahi riverbed. There follows an actively unstable section with big boulders and short bush detours to an unmarked side-creek where the track enters the bush, climbs, then sidles across the bush faces above the River. The track drops back to the riverbed at the unnamed creek 500m downriver from Blue Duck Creek. A mix of track and boulder travel takes you to the Blue Duck which is crossed and a short section of track followed to where the Kokatahi cuts into a shingle bluff. A 50m wade is required around the bluff to get you back onto open riverbed.

The Kokatahi can usually forded here and a direct line taken up the River flats on the TR to where the Crawford currently runs in two easily forded channels opposite the Hut. If this is not possible continue up the riverbed on the TL (with one small tracked bluff detour) to where the Kokatahi splits into two braids just above the Crawford confluence. The Kokatahi is not easy or safe to ford when it's running above normal levels and both Alice and Blue Duck Creek are swift, and could be dangerous or uncrossable if running high. If the Kokatahi is running high you'd be well advised to continue up the TL and use the Crawford Junction cableway. This bit is mostly river travel with three small cut and marked bush detours. Allow 4-5 hours for the journey from Boo Boo to Crawford Junction and be prepared for some quintessentially rough West Coast bush and river travel.

The Pinnacle Biv track starts at the top of the helipad, five minutes downvalley from Boo Boo Hut. It was re-cut and marked by volunteers in March and May 2020. The trackline follows the TL of a small creek initially, then heads straight up the montane faces eventually connecting with a broad spur at the tussock line. Poles and cruise-tape lead from here through the tussock and a couple of bands of scrub towards point 1085m. The route sidles east just below point 1085m and crosses a scrubby gully onto a rib with exposed bare rock. The route continues up this rib, over point 1085m, drops into a dip then climbs the last section through another band of alpine scrub towards Crinkletop. Allow around three hours from Boo Boo to Pinnacle Biv currently, or 7-8 from the roadend.

When dropping from Pinnacle Biv down to Boo Boo Hut make sure you don't continue down the exposed rock rib East of point 1085m. The trail drops off the rib around E1452037/ N5244963 (BV19 520 450) and sidles North across a scrubby face to another open area. More than one party continued straight down the rib into the Kokatahi. The top entrance of the track proper is also a bit vague currently. It's at GPS E1452097/ N5245430.

Repairs needed
Some of the Hut's floorboards may need replacing in the medium-term and the floor leveled. This is unlikely to happen if DOC is still committed to a longer-term replacement plan. The inner western windowsill needs replacing and another fastener latch attached on the right of the frame. The rust patch above the porch needs attention, and more of the regenerating bush around the Hut needs clearing back. The external end wall needs a good scrub, and the flue leak checked out during heavy rain. There is a small tube of sealant in the Hut. One of the floorboards in the toilet has broken and needs reattaching or replacing.

Provisions on site
A coal bucket, two brooms, a hearth brush, a fry pan, a medium-sized pot, a billy, two cups, a dish brush, a mouse trap, a plastic basin, a plastic bucket, a bow saw, a shovel, a container of assorted and small flat-head nails, two axes, a grubber, a phillips screwdriver, two small tubes of sealant, a fish slice, a pair of tweezers, a pair of scissors and two saws.
Powered by