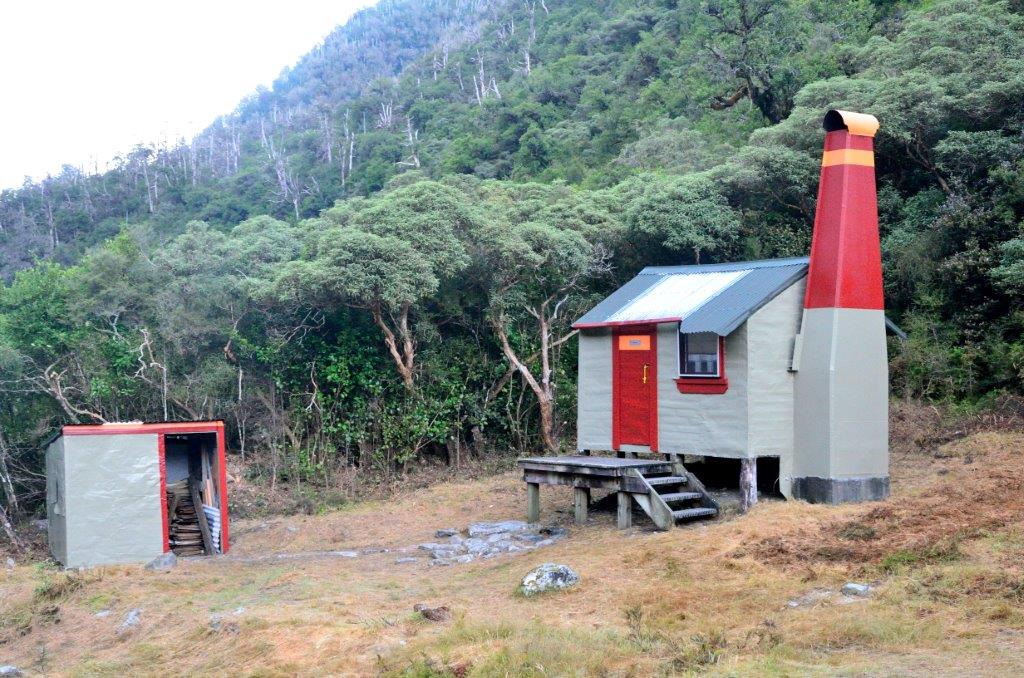 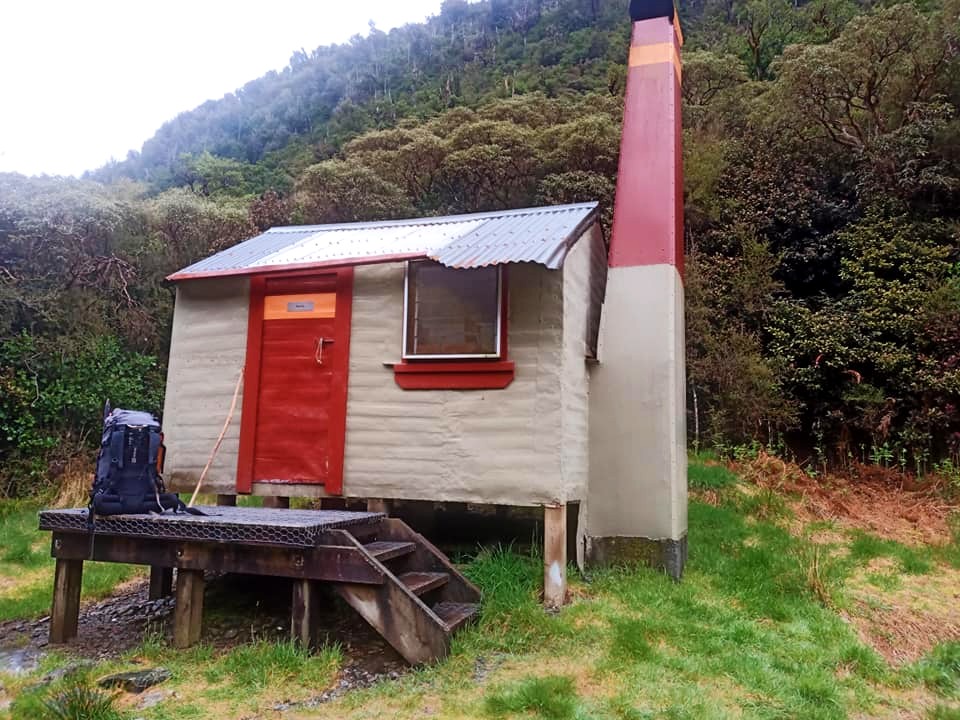 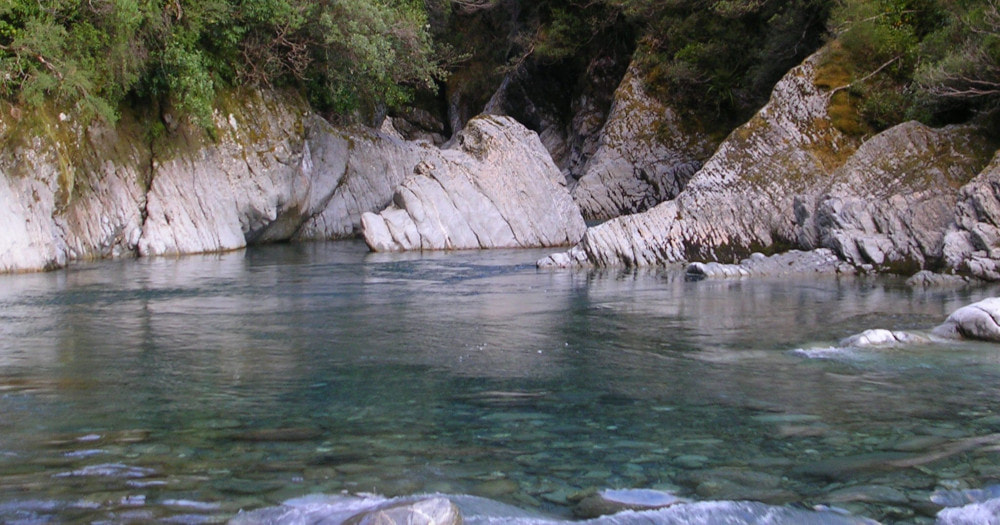 Maintenance Status
Poet Hut and its access tracks are fully maintained by DOC.

Location
Mungo River catchment. Topo Map BV19. Grid Ref: E1449475/ N5233573 (BV19 495 336). Altitude 580m. Poet Hut is located on the TR of the Mungo River around two kilometres above its confluence with the Hokitika. The Hut is an historic NZFS relic from the late 1950's, small and pokey, with an open fire. The bush surrounds are montane forest, a mix of rata, kamahi, totara, pahautea (mountain cedar), and broadleaf. Poet Hut is on the Frew Saddle - Toaroha Saddle circuit, a relatively popular tramp of medium difficulty profiled in the revised edition of Classic Tramps by Shaun Barnett. The loop is currently officially closed between Poet and Bluff huts due to a large slip just upstream of the Bluff swingbridge. It can be bypassed with difficulty via a high bush-bash, or avoided completely by a longer detour up Homeward Ridge and over the tops to the Hokitika basin.

Access
The quickest and most direct way of reaching Poet Hut is up the Toaroha valley and over Toaroha Saddle. This can be done in around 13 hours by a very fit person with a light pack, however two days is normal for most mortals. Allow 8-11 hours to Top Toaroha Hut from the Toaroha roadend. The route from here to Toaroha Saddle Biv crosses an open peaty area to Bannatyne Creek and follows its TL a short distance. The track crosses to the TR, then shortly after this, exits up a steep little side-creek on the TR. There are two short sections of track further up that skirt a couple of small waterfalls. The route exits the creek on a scree near its top and snow poles lead across a tussock bench and down into the upper basin of Bannatyne Creek. There is a short boulderhop up to where the valley narrows, around E1450689/ N5235024 (BV19 507 350) and the poles exit up a steep tussock gut on the TL. The gut is followed onto the crest of the Range where the Biv is located, and continue down a steep tussock face to the scrubline on the Mungo side. A well-cut track leads from here down a steep ridge on the TL of the Beta Creek, connecting with the Mungo valley track half an hour upstream from Poet Hut. The track sidles downriver from the turnoff, crossing Beta Creek and continuing along the River terraces. There is a short section of boulderhopping before the last couple of minutes of track to the Hut. Allow 3-4 hours for the crossing from Top Toaraoha Hut to Poet Hut.

It takes around three days to reach Poet from the Whitcombe end of the circuit via Frew Saddle and the upper Hokitika valley. The track down from Bluff Hut is very steep and parallels the Hokitika River as it plunges over a series of cataracts, 400 vertical metres to the Mungo confluence. The Bluff Swingbridge is crossed to the TR of the Hokitika and continues up the TR of the Mungo to Poet Hut. The track climbs quite high around a gorgy section, dropping back to river level at Poet Creek. The large slip that has led to DOC closing the route is on this bit. It can actually be traversed if care is taken but it is exposed. DOC have cruise-taped a high detour around it that will most likely be cut at some point. The detour reportedly adds a couple of hours to the overall journey. Upstream of the slip here it is mostly river travel with a few short bush detours to Poet Hut. The tracked sections of the route were recut by DOC in February 2020. Allow 5-6 hours currently to get to Poet Hut from Bluff Hut. 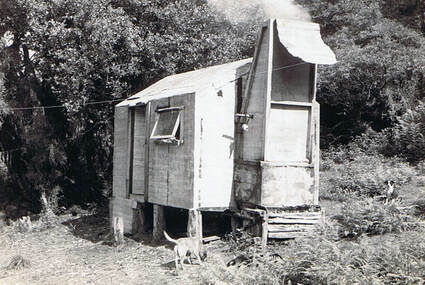 Poet Hut 1961: Photo Ted Smith
Type
Poet Hut is one of the four B48 4-bunk designs built by the NZFS in Westland in 1957. The B48 was a forerunner of the SF81 design which was to become the standard template around the country. It owed much of its layout to the Department of Internal Affairs huts built in the area earlier in the decade. It had an open fire and a flat-iron roof, which was later replaced with corrugated iron. NZFS added a toilet and woodshed in 1983, constructed from materials from the dismantled Lower Toaroha and Lower Kokatahi huts. DOC replaced the perspex window with louvres in the 1990's and added a small deck with steps. DOC did a major rebuild in February 2015. This involved taking the Hut to bits, rebuilding the back wall and replacing all the rotten bits and pieces of the frame. The tongue and groove floor was replaced with hardboard the interior relined and new bunks built. In fact, aside from the general dimensions and placing of the door, widow and fireplace, the interior resembles very little of the original's. There is a loo and water is from the River.

Condition
There was a report of the back wall of the hut leaking, however there was no evidence of this in December 2017. The interior iron fireplace surround has eroded at the back. The chimney smokes unless the louvres are opened slightly.

Routes
The NZFS ceased maintaining the tracks on the TR of the Hokitika below the Bluff bridge in the mid 1970's, and they overgrew and became unfollowable in the following couple of decades. The two Huts on this section, (Frisco Hut and Serpentine Hut) became isolated and were seldom visited, although they both received some maintenance from DOC in 2004. Serpentine became a maintain-by-community project in 2014 and was repiled and painted in 2015. In 2011 the old trackline from Darby Creek up to Frisco Hut was recut and marked by volunteers, and in 2014-15 the gorge sections from Serpentine down to the Whitcombe Junction were recut. The track from Frisco down to Serpentine was finished in 2106. Completion of this route has provided access from up the Hokitika valley to Poet for the first time in over 30 years.

Frisco Hut can be accessed by continuing down the TR of the Hokitika from the Bluff swingbridge. A short section of the old NZFS track below the bridge was recut in 2017. It drops onto the riverbed which is then followed for 15 minutes down to Darby Creek. The Creek would be uncrossable after heavy rain. The track starts 100m up Darby Creek on the TR and follows the ridge up to the 800m contour. There is a fresh slip at around 540m that Andrew Barker has cut a short detour around. At 800m the track veers West and sidles downriver across the bush faces. The route crosses a series of old regenerating slips and a couple of actively eroding bits that need to be upclimbed to maintain the sidle. The open sections are marked with poles and cairns. After crossing the slips the track enters montane forest and sidles in and out of the upper branches of Detour Creek to the Hut. The track up the ridge was last recut in 2019 and the sidle section recut and marked in 2018. It was given a cursory trim in May 2021. Allow 5.5-6 hours to reach Frisco from Poet Hut currently due to the slip.

Access to Sir Robert Hut is via a volunteer maintained track up Homeward Ridge. It was given its last trim in 2019 and is still in reasonably good shape. It commences on the TL of the Mungo 20 minutes upriver from Poet Hut. A swingbridge just downriver from Beta Creek provides access across to the track start. The track crosses a bush terrace to the toe of the Ridge and climbs from there. It's a long haul up to the 1440m contour (1449130E/ 5231595N (BV19 491 316)) where it is necessary to drop East off the Ridge and down a side-spur into the Sir Robert Creek catchment. Ices axes and possibly crampons may be necessary on the top section of the descent during the colder months. Follow the spur to a flat area at the 1250m mark and from here drop into the gut on its TR. The gut goes down through a band of ribbonwood, and at some point becomes a small creek. The creek cascades over some rock steps into a larger side-creek below. This section can be downclimbed without too much difficulty. The larger creek is then followed down a couple of hundred metres to its confluence with Sir Robert Creek. Sir Robert Hut is around 300m upriver from here, up on the riverbank on the TL. A short section of track leads up to it from the Creek. Allow 5-6 hours from Poet Hut to Sir Robert Hut.

It is also possible to get into Sir Robert Creek from lower down Homeward Ridge. The last report I have of this route being used was from the mid-80's however. The drop-off is around the 940m contour (1449957E/ 5232801N (BV19 500 328)) down a steep scree and gut. It is river travel from here up to the Hut with detours through the bush where necessary to get around the gorgy bits. This is a dry-weather route at best, but might be useful if the normal higher-level acces was compromised by snow, ice, or clag.

Access to Mungo Hut from Poet is up the TR of the valley initially. The Mungo route commences at the Toaroha Saddle turnoff. The track sidles along the bush faces above the Mungo River to Saddle Creek where it drops into riverbed. This bit is DOC maintained and was recut in 2020. It is river travel up the TR from Saddle Creek for around one kilometre to where the River cuts into a low bluff. There is a recent slip on the TL just upriver from Saddle Creek that has forced the River in against the TR bank and a bush bash is now required here. Jane Morris cut a rough line through this in June 2021. Further up at the low bluff the River can be forded when low and the TL followed for the rest of the route. Otherwise continue up the TR using short sections of track around the low bluff and a second rocky outcrop just upstream from it. The latter has some narrow rock ledges a couple of meters above the river that require a bit of scrambling to negotiate.

Boulderhop from here to just below the Brunswick where a track enters the bush and does a high detour around a small side creek with waterfall. This can usually be avoided when flows are normal by fording to the TL here, crossing the Brunswick and fording back to the TR above Park Stream. The Brunswick is swift flowing and bouldery and not always easy to ford in its lower reaches. If staying on the TR, there is a section of river travel upstream of the main detour followed another short tracked section around a low bluff. Continue up the riverbed from here. A track marked by a large orange triangle commences about 100m up from Park Stream and climbs steeply for 15 minutes up a narrow ridge to the hut-site. Normally it would take around three hours from Poet Hut to Mungo Hut, however this can vary depending on river conditions.

Repairs Needed
No immediate or urgent repair work required as far as we know.