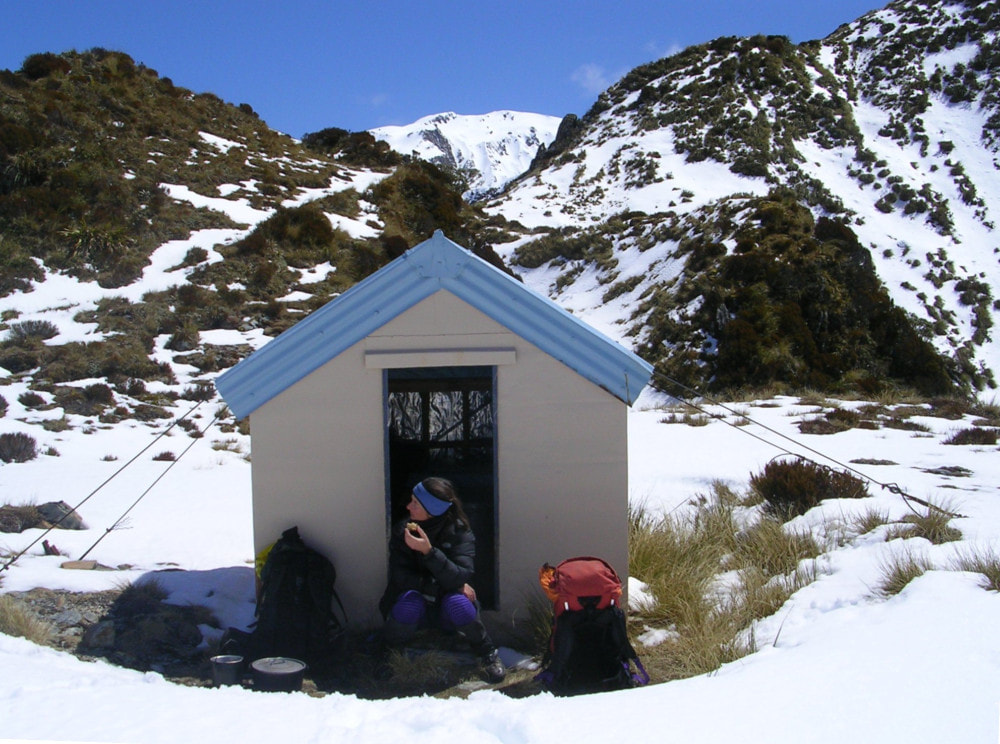 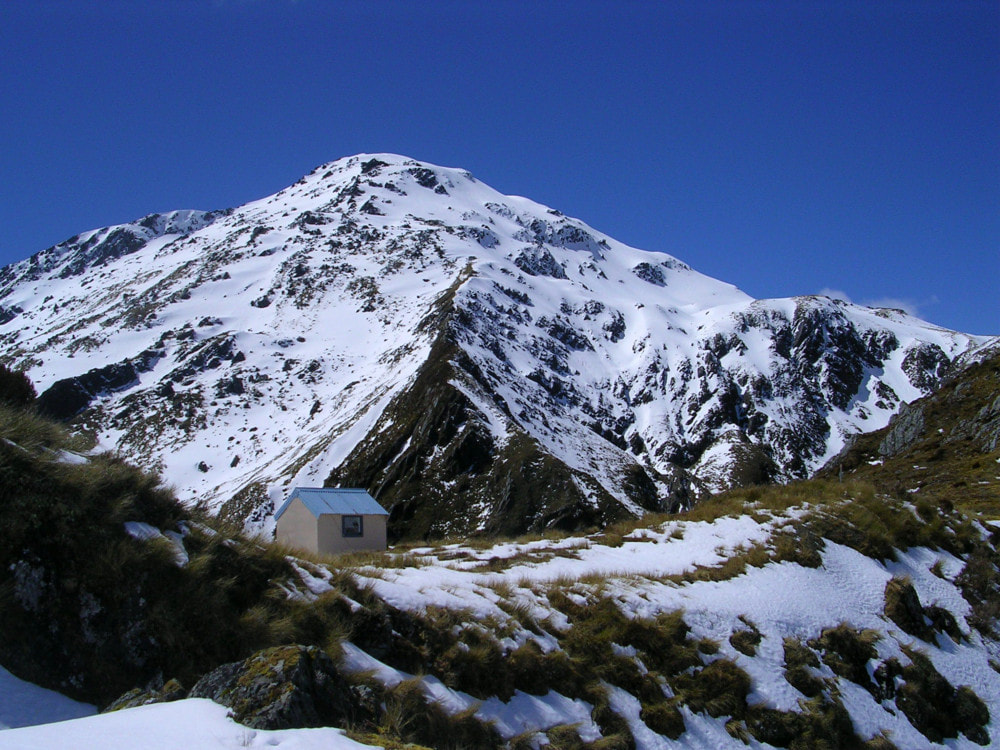 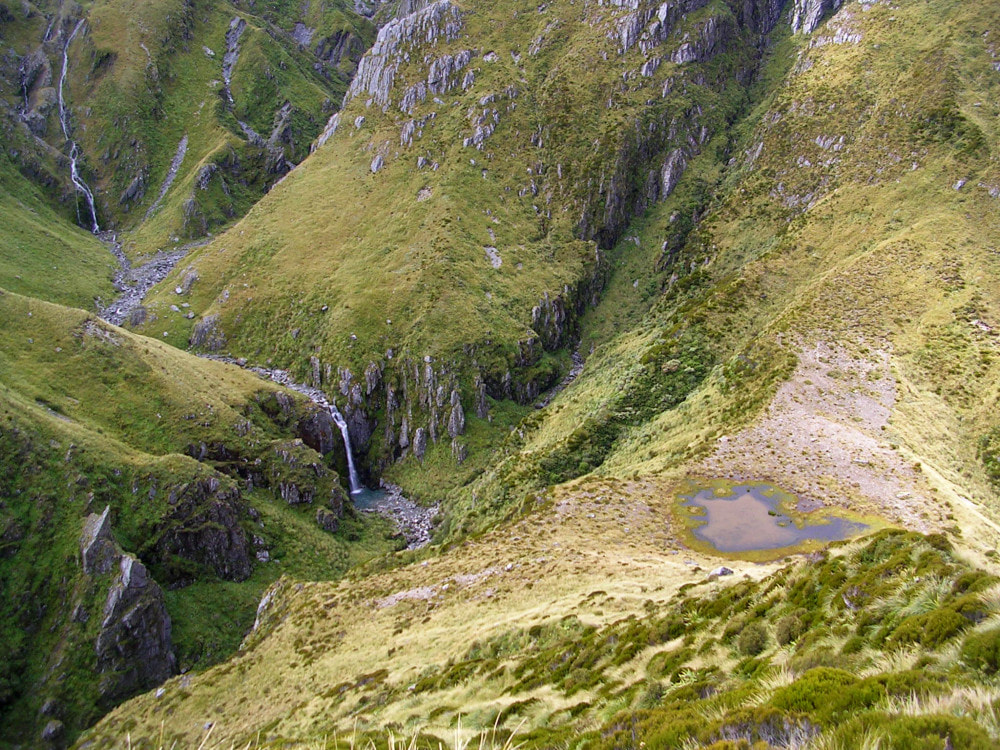 Location
The Diedrichs Range. Map BV19. Grid Ref: E1450448/ N5234879 (BV19 504 349). Altitude 1200m. Toaroha Biv is located on the crest of the Diedrichs Range just above, and West of Toaroha Saddle. It is on the Frew Saddle - Toaroha Saddle circuit, a 4 - 5 day tramp of moderate difficulty, included in Shaun Barnett's revised edition of Classic Tramps. The Biv is cosy and in good condition with over the Mungo valley to the Main Divide. The Diedrichs and Toaroha Range tops are readily accessible from the Biv and offer a number of interesting high-level trips to other remote locations.

Access
Although a fit person travelling reasonably fast and light could get all the way to Toaroha Biv in 10-11 hours from the Toaroha roadend, most choose to make their first stop at Top Toaroha Hut, 8-10 hours in. From Top Toaroha follow the track across an open peaty area and up the TL of Bannatyne Creek a short distance. Ford to the TR and exit up a steep little side-creek a bit further up. A couple of short sections of track skirt some small waterfalls and lead onto a scree in the side-creek's head. Follow the snow poles from here across a tussock bench and back down into the upper basin of Bannatyne Creek. A short boulderhop follows to where the valley narrows around E1450689/ N5235024 (BV19 507 350) and snow poles lead out of the Creek here up a steep tussock gut on the TL. Follow this up onto the crest of the Range where the Biv is located. The trip up to the Biv from Top Toaroha Hut takes 1.5 - 2 hours and the tracked sections were recut by DOC in 2020.

Type
Toaroha Saddle Biv was a B142 high-stud design, and the last Biv built in Westland by the NZFS. It was constructed in 1984 to replace an older B55 model, built in 1961. The new Biv cost a mere $2903 to build and the simple design has withstood the numerous alpine storms that have barreled across the Saddle in the ensuing decades. There is enough room to walk at a stoop and a small upper and lower bunk at the far end. The Biv is lined with tar paper, rests on wooden blocks rather than piles, and is held in place by wire tie-downs. A couple of small tarns on the Mungo side of the ridge provide drinking water. There is no toilet.

Condition
Toaroha Biv is in good condition currently. It was repainted in March 2013. Water occasionally blows or seeps in under the door and the tie-downs are slack and need tightening.

Routes
The Diedrichs and Toaroha Ranges are easily accessible from the Biv, with some great tops trips possible. A long, relatively gentle ridge leads up to Mt. Ross and provides access to the Mullins and Darby Creek basins. A route down to Mullins Hut starts on the scrub edge in the upper TR basin of Mullins Creek, around E1447123/ N5237324 (BV19 471 373). A thick band of scrub makes all the other access options into the main basin unattractive, and an impassable slot-gorge in the TR branch prevents access down the Creek itself. A permolat cross marks the start of the route, which is down a small creek. There is some quite thick scrub in here which was cut back a bit in 2008, but has regrown. It's a bit of a grovel in places but preferable to its alternatives. The creek is followed down to the main basin, from where it is 10 minutes travel downriver to the Hut.

Frisco Hut can be accessed by sidling West off the Range at the dip just after point 1524m. Follow roughly the 1500m contour through an area of shattered rock onto a flat bench overlooking Darby Creek. A rock gut around (around E1447618/ N5234888 (BV19 476 348)) provides easy access from the end of the bench down into the basin, entering Darby Creek a short distance upstream from the top of the large waterfall. Head up Darby Creek for a bit then turn up the first side creek coming in on the TR, taking the TR branches as it forks, that leads to a short tussock basin and onto the ridge just north of point 1510m. Drop from the top of point 1510m down its steep SW spur onto a sloping tussock bench with tarns around Waratahs and the odd bit of permolat lead from the SW corner of this bench down through scattered alpine scrub to the top the scrub faces above the Hut(E1446195/ N5234400 (BV19 462 344)). The toilet and part of the roof should be visible from here. Follow the markers off the edge of the bench down the faces into narrow gut that leads through olearia forest to intersect the Darby Creek track 50m East of the Hut. The tracked portion was recut and marked in March 2018. The steeper sections on either side of point 1510m may require ice axes and crampons during the colder months.

There is a direct tops route to Mungo Hut from Toaroha Biv via an old cullers route down the ridge on the TR of Topo Creek which was cut and marked in April 2019. Head East from the Biv, drop down to the Saddle, and climb from here up onto a flat area at 1400m just above the TR fork of Topo Creek. Drop SE from here onto the ridge bounding the TR of the fork. The top end of the ridge is very steep and exposed in a couple of places and the safest option is to sidle off where required, into a gut on the Topo Creek side, and rejoin the ridge a bit further down. This detour was cruise-taped in December 2019. The ridge flattens further down and there are three waratahs, the bottom-most of which (E1452197/ N5234762 (BV19 522 348)) marks the top entrance of a track that drops East down a steep side-spur towards Park Stream. The track drops into Topo Creek 20 metres above where it enters Park Stream. The Park is crossed and followed upstream for 400m to the start of a track that climbs 60 or so vertical metres up onto the terrace and Hut. Allow two hours plus for the trip from the Biv to Mungo Hut depending on conditions. Ice axes and crampons are strongly recommended for the colder months.

Yeats Ridge Hut and Crystal Biv can be accessed by continuing along the Toaroha Range to point 1694m, then dropping down the prominent spur that runs West from it. The spur forks at the 1300m contour and the NW fork is taken to reach Yeats Hut. There are a few waratahs and stakes (the top waratah is at E1449761/ N5238689 (BV19 498 387)) leading to a cut and marked trail down a scrubby face. The poles continue North from the bottom of the face through patchy scrub and open tussock onto a low ridge bounding Zit Creek. The track follows the ridge down to an open area bordering the shallow basin in which the Hut is located. The odd wooden stake marks the route across the basin and up to the Hut.

Crystal Biv is accessed down the SW fork of the side-spur. The Biv is visible in fine weather from the 1200m contour and it is easy travel down to it. There is a bit of scattered scrub near the bottom that can be negotiated by veering North around the big tarn. Allow 5-6 hours in good conditions for the traverses from Toaroha Biv to Crystal and Yeats.

Repairs needed
The door needs a flashing to stop water getting into the Biv and the tie downs need tightening. This is particularly important as the Biv is only resting on wooden blocks.

Provisions on site
One NZFS food bin, a billy, two buckets (one aluminium and one plastic), an aluminium wash basin, a few nails and bits of permolat, two panes of louvre glass, a broom, an old NZFS first aid kit, some odds and sods of wood, a tin of paint, a tin and a large plastic container of turpentine, and two litres of oil (chainsaw?).