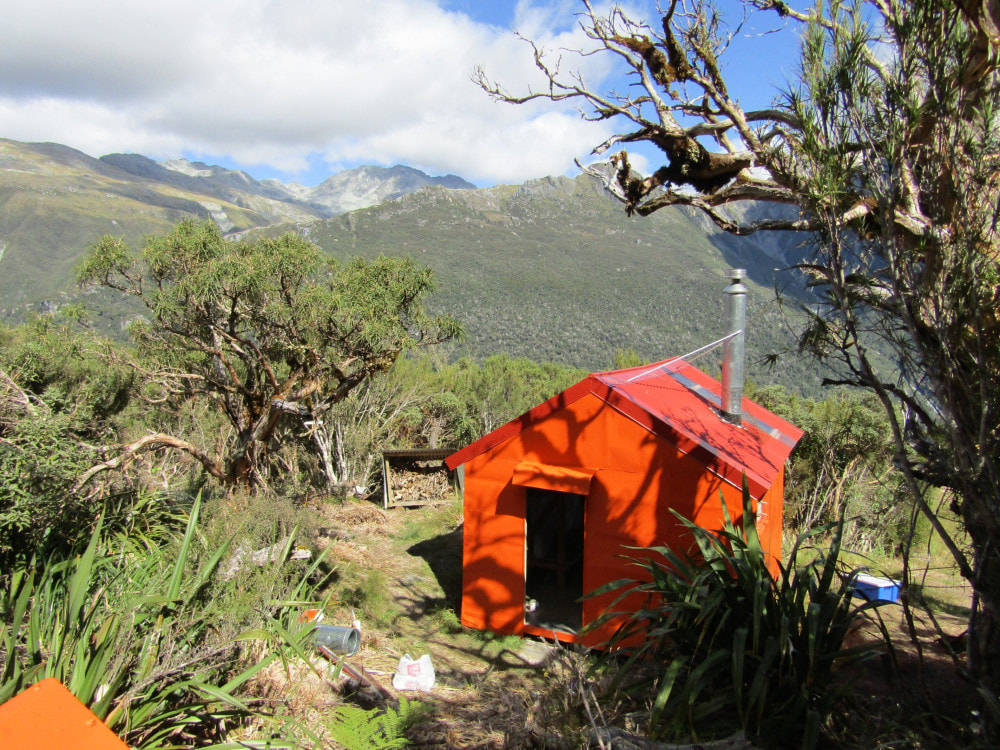 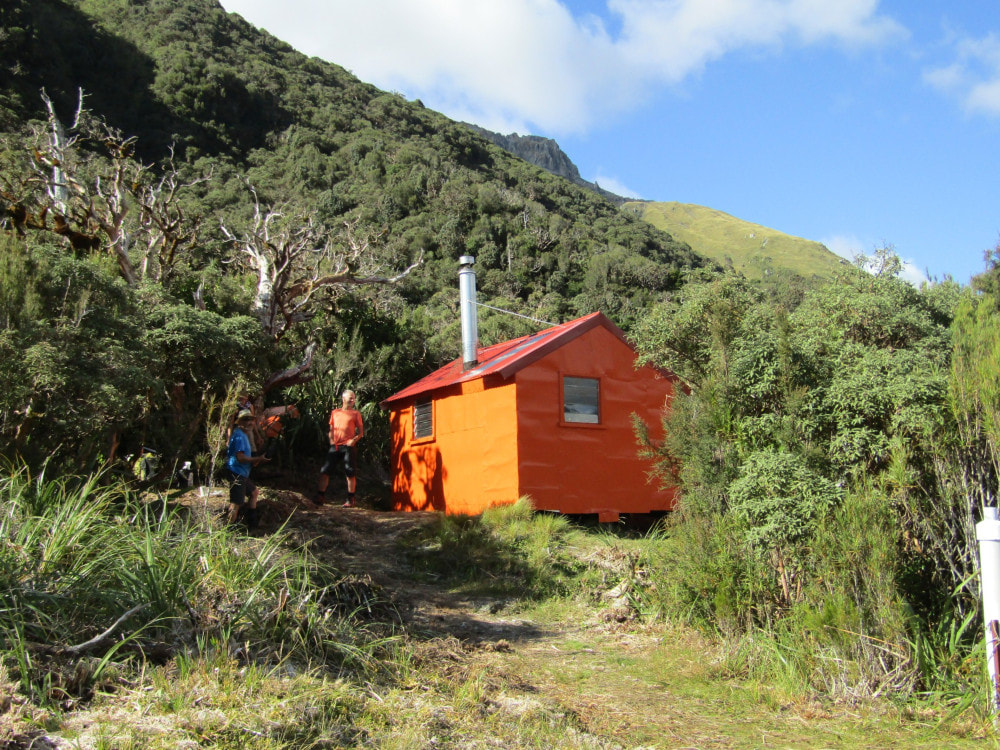 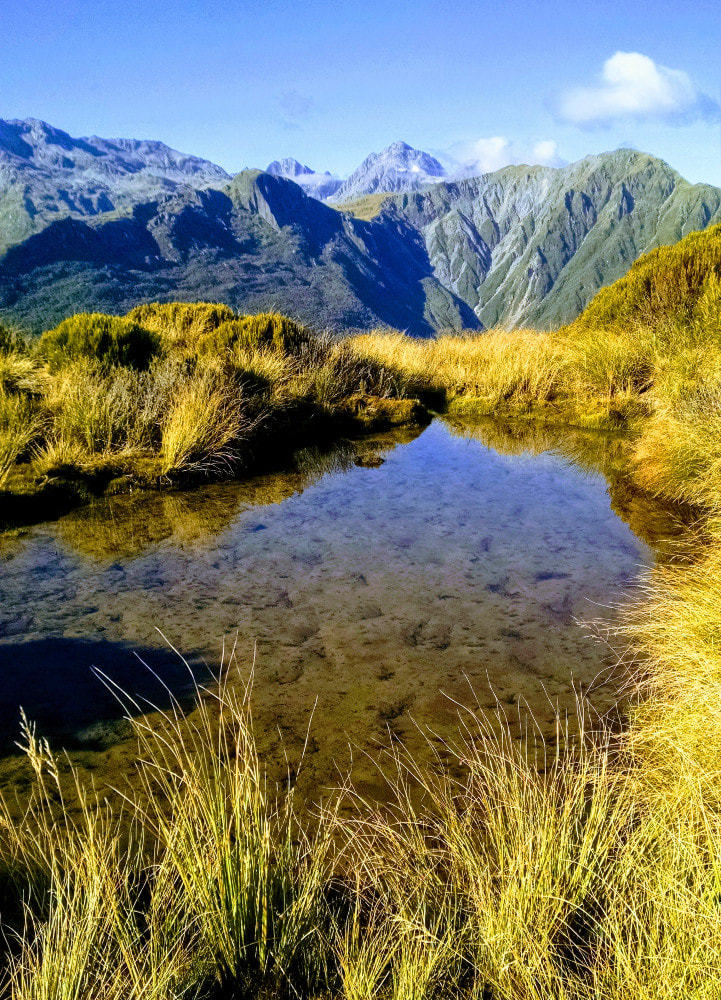 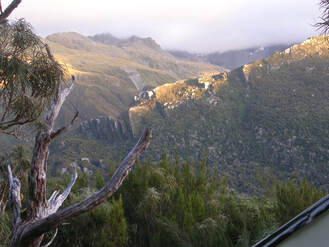 Conway Ridge from Frisco
Maintenance Status
Frisco Hut is community maintained as part of a general agreement Permolat has with DOC. It originally formed part of a hut and track network established in the Hokitika valley by the NZFS in the late 1950's. NZFS stopped maintaining the access tracks in the lower valley in the mid 1970's and by the turn of the century they had overgrown and vanished in many places. Frisco became isolated from track access and remained so for a good 20 years, receiving few visits. Although no maintenance was carried out between 1983 and 2004 the Hut remained reasonably sound and weatherproof. DOC came in and did a bit of minimal maintenance in 2004 and finally in 2011 we recut the track up from Darby Creek to reconnect Frisco with the DOC maintained Frew - Toaroha circuit. By 2015/ 16 the tracks downriver all the way to the Whitcombe Junction had been done and in April 2017 Paul Reid of Permolat used some Back Country Trust funding to carry out major maintenance and install a woodburner that was kindly donated by Mauricio Lloreda of Nelson. The Hut and access tracks will continue to be maintained by Permolat.

Location
Hokitika catchment. Map BV19. Altitude 915m. Grid Ref: E1446095/ N5233930 (BV19 461 339). Frisco is located on a bench in the montane zone, high above the Hokitika valley stunning vistas out over to the Meta Range,  Conway Ridge and the peaks of the Whitcombe. There is a palpable feeling of isolation and solitude at Frisco and in its original NZFS hutbook the visits listed between 1983 and 2003 average around one every 2-3 years and take up a mere half dozen pages. Traffic picked up a little after 2004 when the Hut was profiled on the website, and increased again following the trackwork. 2017 was a record year with 16 visits.

Access
Access to Frisco from Serpentine Hut is along the riverbed initially. An active slip is crossed, then a short tracked section, followed by another river section which ends at a gorge at a bend in the River. The track enters the bush here and climbs for 10-15 minutes up and around a large waterfall before dropping back to the River. Up until recently it was possible to avoid the climb when River levels were low by fording the River at the mouth of the gorge and crossing back upstream of the fall, however the bottom ford is a bit dodgy currently (it this may alter again). The River is followed from above the ford to a short section of track just before Bonar Creek. After this it is boulderhopping again to Nogo Creek.

The climb up to Frisco starts on the TL of Nogo Creek and goes straight up the ridge on its TL. An animal and vegetation survey line from 1985 follows the trackline initially. The plots have red permolat on aluminium stakes, on the forest floor and tagged trees. The track levels at point 910m and crosses and undulating bench of sub-alpine forest with a few tarns and open marshy patches. It leaves the bench and climbs a bit before sidling off the ridge and along the bush faces, an undulating 15-20 minutes to the Hut. Allow 3-4 hours currently for the journey from Serpentine to Frisco. The track was still in good condition in May 2021 when Jane Morris did a bit of windfall clearance and a couple of re-routes.

Access to Frisco from Poet Hut and Bluff Hut from the Bluff swingbridge. The section from Poet Hut just downriver from Poet Creek has a large slip that has led to DOC to closing the route. It can actually be traversed if care is taken but it is exposed. DOC have cruise-taped a high detour around it that will most likely be cut at some point. The detour reportedly adds a couple of hours to the overall journey. A short section of track leads downriver from the bridge, dropping to the riverbed via an awkward climb down a steepish eroding bank onto a large boulder. The riverbed is then followed for 15 minutes to Darby Creek. The Creek would be uncrossable after heavy rain. The track entrance is 100m up Darby Creek on the TR and is marked with a white permolat "T." It follows the ridge up to the 800m contour where it veers West and sidles downriver across the bush faces. The route crosses a series of old regenerating slips and a couple of actively eroding bits that need to be upclimbed to maintain the sidle. The open sections are marked with poles and cairns. After crossing the slips the track re-enters the forest and sidles in and out of the upper branches of Detour Creek to the Hut. The track was still in good condition in May 2021 when Jane Morris did the odd bit of trimming on the way down. Allow around 3-4 hours to reach Frisco from Bluff and 5+hrs from Poet Hut currently.

There is an open area in front of the Hut that is used for helicopter access.

Type
Frisco is an NZFS 4-bunk S81 design built around 1964. It was a very basic design lined with tar paper and chicken wire, and had wire mesh bunks. It started with an open fireplace that was probably removed in the late 1960's. A toilet was added around 1983, constructed from materials salvaged from the dismantled Lower Toaroha and Lower Kokatahi huts. A small creek 20m down the Serpentine track provides water.

Condition
Frisco Hut is in good shape currently. In 2004 DOC replaced some of the framing and one of the piles, some floorboards by the door, the wire mesh on the bunks with wooden slats, and removed one of the door cupboards to make more space. In 2017 Paul and company replaced the roof and some of the frame, sub-floor timber, and piles. The end window was re-flashed, the woodburner installed, and a small woodshed built. The remaining cupboard was removed and the bench shifted to the NW corner to allow room for the woodburner. Some major clearance of vegetation was done around the hut site. In March 2018 a second work crew went in and sealed and repainted the Hut. The end window was rebuilt and sealed and the flue modified. A plastic PVC sheet was installed under the skylight to reduce condensation. In April 2019 Andre Winkleman added a metal cowling to the flue to protect the rubber flashing from kea.

Routes
There are a number of tops routes to Frisco over the Diedrichs Range that require reasonably high levels of fitness and experience. The first from Mullins Basin follows the TR fork of Mullins Creek, just upstream from Mullins Hut, until just before the start of a steep-sided gorge. A rock cairn at a small side-creek on the TR (E1446987/ N5237610 (BV19 470 376)) just below the first big pool in the main Creek marks the exit point. There is some quite thick scrub in here and although a bit of a grovel in places, it's preferable to the alternatives. Follow the side-creek taking the TL branch where it forks and becomes quite narrow. It eventually leads to the scrub boundary in the upper basin around E1447123/ N5237324 (BV19 471 373). Head across the basin through scattered alpine scrub and up the spur that divides the two main branches of the upper Creek. Mt. Ross is traversed to a flat bench SE of its summit at around 1500m. An open rock gut at the western end of the bench (around E1447618/ N5234888 (BV19 476 348)) provides easy access down to the bottom end of Darby Creek basin.

Head up Darby Creek for a bit then turn up the first side creek coming in on the TR, taking the TR branches as it forks, that leads to a short tussock basin and onto the ridge just north of point 1510m. Drop from the summit down its SW spur onto a tussock bench with tarns just above the scrubline. Waratahs and the odd bit of permolat lead through scattered alpine scrub from here in a SW direction to the edge of the scrub faces above the Hut. The toilet and part of the roof should be visible from the drop-off point (E1446195/ N5234400 (BV19 462 344)). The route drops down the scrub faces into a gut which passes through some nice olearia forest and intersects the Darby Creek track 50m East of the Hut. The tracked portion was cut and marked in March 2018 and checked again in December 2019 and is in good shape. Allow 5-6 hours for the crossing from Mullins in good conditions.

It is also possible to cross over into Darby Creek basin via an unnamed saddle at the head of the upper Mullins basin, however the drop off directly below the saddle into Darby Creek is steep and eroding with vertical sections that are not visible from above. The best looking access is down a scree that runs diagonally south from the saddle. Once in Darby Creek, cross and climb up onto the ridge bounding the TR of the basin and follow this to point 1510m.

Frisco Hut can be accessed from Top Toaroha Hut by following the blown-out creek that enters the Toaroha at the bottom of the lake. The creek is still actively eroding in its head, but provides relatively easy access to the tussock and the SE ridge of Mt. Ross. Head up the ridge to the dip after point 1524m, then sidle off in a Westerly direction, roughly following the 1500m contour to the flat bench above Darby Creek. The rest of the route is the same as the Mullins route. Allow 4-6 hours for the journey from Top Toaroha to Frisco in good conditions.

Access to Frisco from Toaroha Saddle Biv is along the Diedrich Range to the dip after point 1524m and as per the Top Toaroha route from there.

A traverse of the Diedrichs Range is possible from Frisco to Gerhardt Spur Biv. Use the tops track adjacent to the Hut to access point 1510m. Continuing up the spur to point 1718m and follow the Range North, bypassing the middle and high peaks of Mt. O'Connor by sidling along a conspicuous bench at the 1600m contour on the Mullins basin side. Jumble Top has three small peaks on its South side that must be traversed. The last peak just north of point 1612m has a steep exposed rocky pitch on its northern approach, which some may find daunting to downclimb. This can be avoided if necessary by dropping down a steep scree just South of the peak on the Diedrichs Creek side and climbing up the scree's TL fork back onto the Range North of the gnarly bit. The detour adds around 20 minutes to the traverse. The entire Jumble Top traverse can be avoided by dropping down a scree into the head of Diedrichs Creek from the saddle just North of point 1610m. Climb from the top fork of the Diedrichs Creek up the tussock faces onto Gerhardt Spur, connecting with the Spur around the 1300m mark.

Repairs
There appears to be a bit of water coming down the inside of the outer flue. A billy has been left hanging on the boxing around the flue to catch this, and may need emptying from time to time. Not much water is coming in, but the billy stops water dripping onto the top of the woodburner and rusting it.

Provisions on Site
Four billies, a broom, 10 perspex louvre panes, a large box of small flathead nails, a quantity of permolat, an aluminium wash basin, a small camp oven, an axe, a slasher, a shovel, a flat file, and some leftovers from a roll of No. 8 wire, a small quantity of sealant and sealant gun, a small wooden stool, assorted lengths of 4x2 and one 6x1, and a short section of the original flue cowling.
Powered by