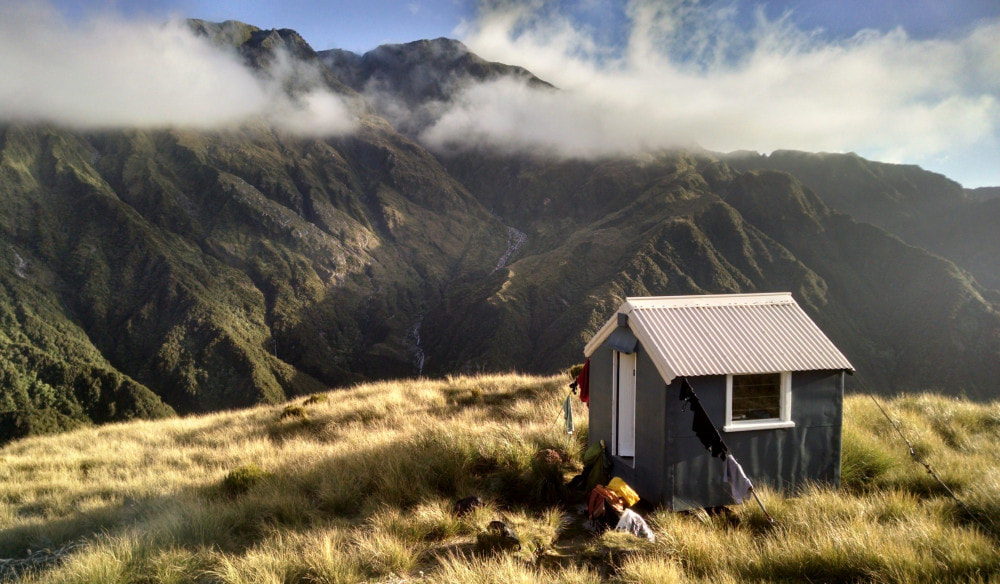 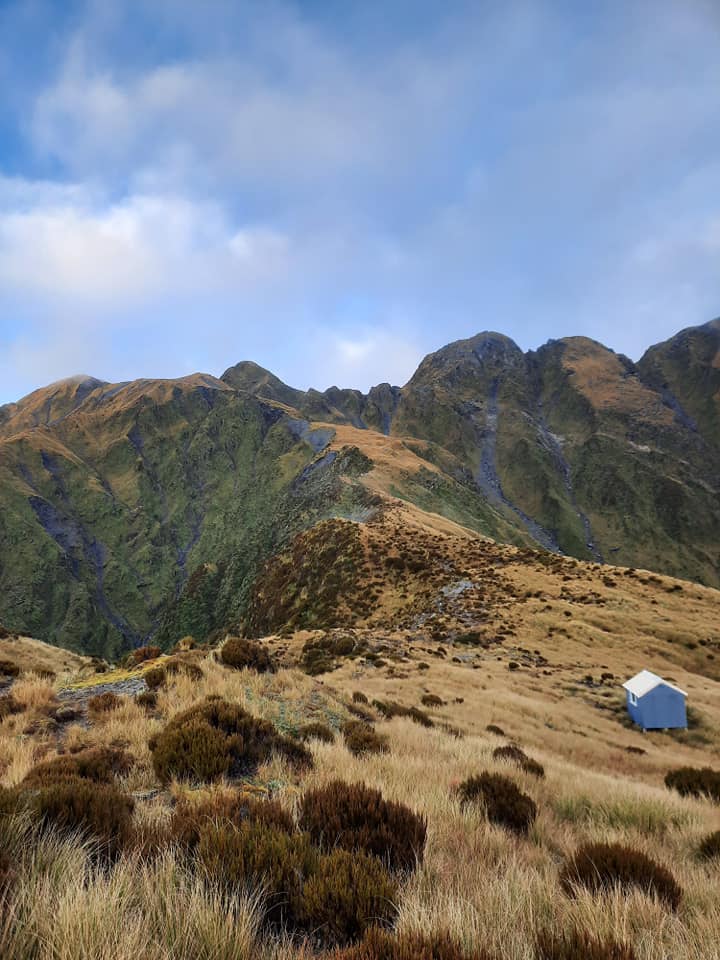 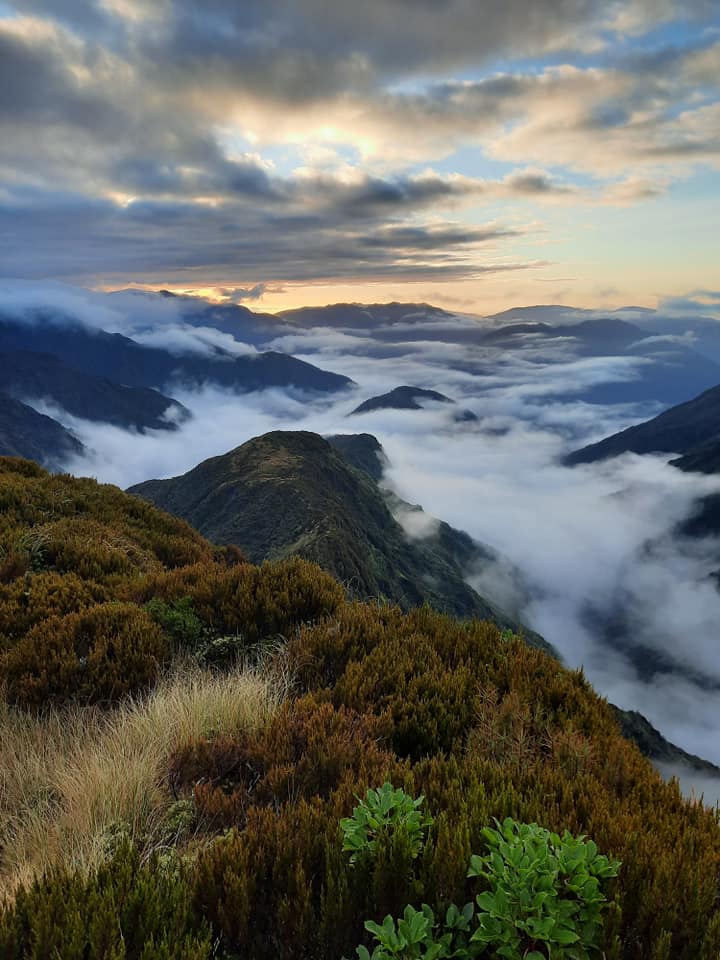 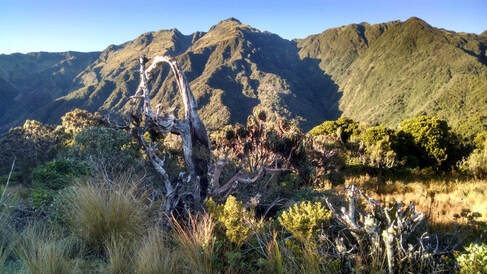 Mt O'Connor from the 950m contour on Gerhardt Spur
Maintenance Status
Gerhardt Spur Biv is still DOC maintained. The track was also supposed to be DOC maintained but has been kept open by volunteers for a good decade or so. Permolat used some bulk funding from the Back Country Trust to recut the route in 2020. James Parker and I got dropped in at the top end in May and started working down. I finished the mid and lower sections during several foot visits in the ensuing months.

Location
Hokitika catchment. Map BV19. Grid Ref: E1444715/ N5240380 (BV19 447 404). Altitude 1250m. Gerhardt Biv is located on Gerhardt Spur which runs from the border of the Kowhiterangi Plain to the summit of Jumble Top (1610m) on the Diedrichs Range. The Spur is long and narrow and separates the Diedrichs and Muriel Creek catchments. There are fantastic views from the Biv out over the farmlands to the Tasman Sea. The summit of Jumble Top is an easy 30 minute climb from the Biv in good conditions. The Biv had received 18 visits in 2019 and visitation appears to have increased even more post Covid.

Access
Access to the start of the Gerhard Spur track is along the TR of Diedrichs Creek from the Diedrichs Creek bridge on the Hokitika Gorge road. There is a padlocked gate to deter poachers at the start of the farm track, however it is public conservation land and there is a paper legal road along the TR of the Creek. Cross Muriel Creek and continue up the Diedrichs Creek riverbed for around one kilometre crossing one of the braids where cuts in against some shingle bluffs. The track enters the bush at the top end of the bluffs (E1439727/ N5240703)(BV18 397 407), climbs steeply initially then passes through an area with a fair bit of windthrow and regrowth. There is another very steep section just below Point 867m after which the Spur flattens and continues at a fairly level gradient for 1.5km. The ridge then steepens and the track goes up through a band of pink pine onto a bench with open tussock patches and tarns at 960m. Another steep section follows to a bench at 1120m where the odd bit of debris from the original Gerhardt Biv can be found. A final steep section follows up through a last band of alpine scrub onto a flat area of ridge where the Biv is located, just off the crest on the Diedrichs Creek side. Allow 4-6 hours from the Diedrichs Creek Bridge to the Biv. 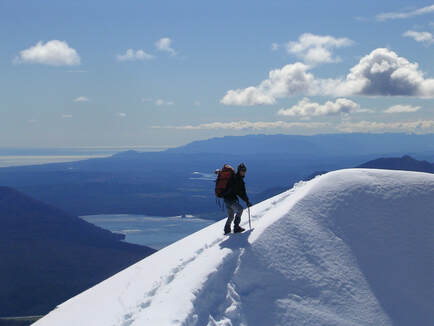 Looking out to Lake Kaniere from Jumble Top
Gerhardt Biv can be accessed from Cedar Flat in the Toaroha valley over Squall Peak and Jumble Top. A track from Cedar Flat onto Squall Peak is not officially maintained, but has been kept open by Permolat volunteers. In May and July 2020 Andrew Barker and friends recut and marked the track. It starts 50 meters up the TL of Percy Creek at the bottom of Cedar Flat, climbs steeply through the rata belt to a knoll at 950m, then zigs North across the spur through a grove of leatherwood before resuming its upward trajectory. The top entrance is at 1090m (GPS: E1447197/ N5242071)(BV19 472 421). Waratahs lead through scattered alpine scrub, then open tussock patches, to a rock outcrop at 1200m. There is a large tarn with good campsites on the South side of the ridge at 1240m. From Squall Peak it's a straightforward traverse of Jumble Top to the Biv. An ice axe may be necessary during the colder months on a short, steep pitch on the Gerhardt Spur side of Jumble Top which is occasionally icy. Allow 4-5 hours travel from Cedar Flat to Gerhardt Biv. Times could vary considerably depending on the season and conditions 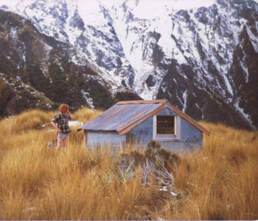 The late David Merrick at the original Biv: Photo Glenn Johnston
Type
Gerhardt Spur Biv was built by NZFS in 1972 to replace an older biv that had blown off its piles lower down the Spur. It was the second of the high-stud B142 designs that were constructed around this time. These models were taller than than their predecessors, with room to stand at a slight hunch (for some). There are two smallish bunks with mattresses along the side and end walls. The Biv is lined, and of sturdy construction. Back before the day of the ubiquitous DOC warning signs we used the kerosene cooker supplied by the NZFS to warm these tiny spaces. Gerhardt used to turn rapidly rapidly into a sauna, and there was the odd headache from the fumes as I remember. A small tarn nearby supplies water. There is no toilet. There is cellphone reception from the ridge just above the Biv.

Condition
Gerhardt Biv has had the odd bit of maintenance over the years. DOC repainted its roof, door and window sills in 2013.  The paint is flaking off the door and the door frame has seen better days. Damp patches have been reported on the floorboards abutting the walls, which may be caused by snow melt, or condensation. There is a bit of buckling of the interior lining, probably related to this. The turnbuckles on the northern tie-wires have been screwed as far as they will go. The southern tie downs are just fixed with u-bolts. The tie-wires could do with a little more tightening, which will require readjustment of the wire ropes so the turnbuckles can be set back. The mattress covers are past their best-by. The roof still has the original lead head nails. DOC had a makeover planned at some point however this has not yet happened. Tom Hayes is keen to do a bit of work and may seek their consent to take it on.

Routes
A traverse of the Diedrichs Range from Gerhardt Spur requires the crossing of three small peaks South of Jumble Top. The first, between Jumble Top and point 1612m, has a steep exposed section of blocky, unconsolidated rock on its northern approach, which some find daunting. It is possible to climb up through the steep vegetation on the Toaroha side that avoids the worst of the rock. All of this can be avoided if necessary by dropping down a steep scree on the Diedrichs Creek side of the peak and climbing the TL fork of the scree back onto the Range North of point 1612m. The detour adds around 20 minutes to the traverse.
Jumble Top can be avoided completely by dropping off Gerhard Spur around the 1300m contour into the top fork of Diedrichs Creek (E1445295/ N5240250 (BV19 453 403)). Head up the TL fork to the dip between points 1612m and 1610m. There is water flowing initially, then an easy open scree further up. Point 1610m can be sidled on the Toaroha side. A rock cairn and iron stake on a flat area between points 1780m and 1610m mark the drop-off point into Mullins Basin. The remains of the old Jumble Top Biv can be found on a bench just below here.

Mullins Hut is accessed in a SE direction down a broad face, vertically dissected by a number of deep slots that form creeks lower down. The entry point basin is around E1446823 N5238000 (BV19 468 380), between two small creeks, both of which have waterfalls. The bottom section of the route passes through low, patchy alpine scrub and was cruise-taped in 2008. Allow around four hours to get from Gerhardt Biv to Mullins Hut in good conditions. Ice axes may be needed on the Jumbletop traverse during the colder months.

For those travelling further along the Diedrichs Range, there is an easy sidle of O'Connor on the Mullins side at roughly 1600m which reconnects with the main Range at the saddle before point 1718m. Serpentine Hut in the Hokitika can be accessed from from a flat area on the main Range NW of point 1718m. An NZFS track used to drop from here down the ridge immediately behind the Hut. The first section of the drop-off is pretty steep and a bit exposed in places. The top part of the old track can be located on the scrubline, but vanishes completely a short distance further down in dense alpine scrub. A bit more permolat can be found on a knoll down in the montane zone, but the remainder is a rather unpleasant bush-bash down to the River. I did a bit of track clearance up from the bottom of the track in 2017, but have no idea yet where it connects up. An ice axe may be required for the steeper faces on the Hokitika side during the colder months.

An alternative, probably not much better, is to drop down Serpentine Creek from the middle Peak of O'Connor. There are some good campsites in the upper basin, however travel further down is rough, with some waterfalls that need sidling around through steep bush. This route has been done at least 3 times in the last 30 years and the least favourable comment is from someone who wrote in the Serpentine hutbook in 2011 that he'd rather have his throat cut than do it again. Allow a long day for both of the above routes.

Frisco Hut in the Hokitika can be accessed by dropping from point 1718m down the ridge on the TR of Darby Creek basin to point 1510m. Drop down the SW spur of 1510m onto the flat tussock bench with tarns below. Waratahs and the odd bit of permolat lead from the SW corner of this bench down through scattered alpine scrub to the top the scrub faces above the Hut. The toilet and part of the roof should be visible from here. Follow the markers off the edge of the bench down the faces into narrow gut that leads through olearia forest to intersect the Darby Creek track 50m East of the Hut. The tracked portion was recut and marked in March 2018. Allow 7-9 hours for the crossing from Gerhardt Biv to Frisco Hut in summer conditions. An ice axe and possibly crampons may be necessary on some of the steeper sections of the traverse during the colder months.

Toaroha Saddle Biv can be accessed from Gerhard Biv along the Diedrichs Range. There are apparently some narrow, exposed sections between point 1718m and Mt. Ross that need to be traversed with care. The ridge from Mt. Ross down to the Biv is long, gentle and easy. Allow a full day for this crossing.

Top Toaroha Hut can be accessed by dropping off the Range from the dip between points 1524m and 1421m. Descend in a NE direction into the head of the blown-out creek that enters the Toaroha at the bottom of the lake below the Hut. The creek is still actively eroding, but provides open access all the way down.

Repairs
The tie downs need attending to and new mattress covers are needed. The bottom end of the track needs finishing and more permolat added in places.

Provisions on site
A Slasher, a sledgehammer, a hand-brush, a broom with no handle, two billies, an aluminium bucket, an aluminium wash basin, a bench-seat, two paintbrushes, and a coarse file.
Powered by