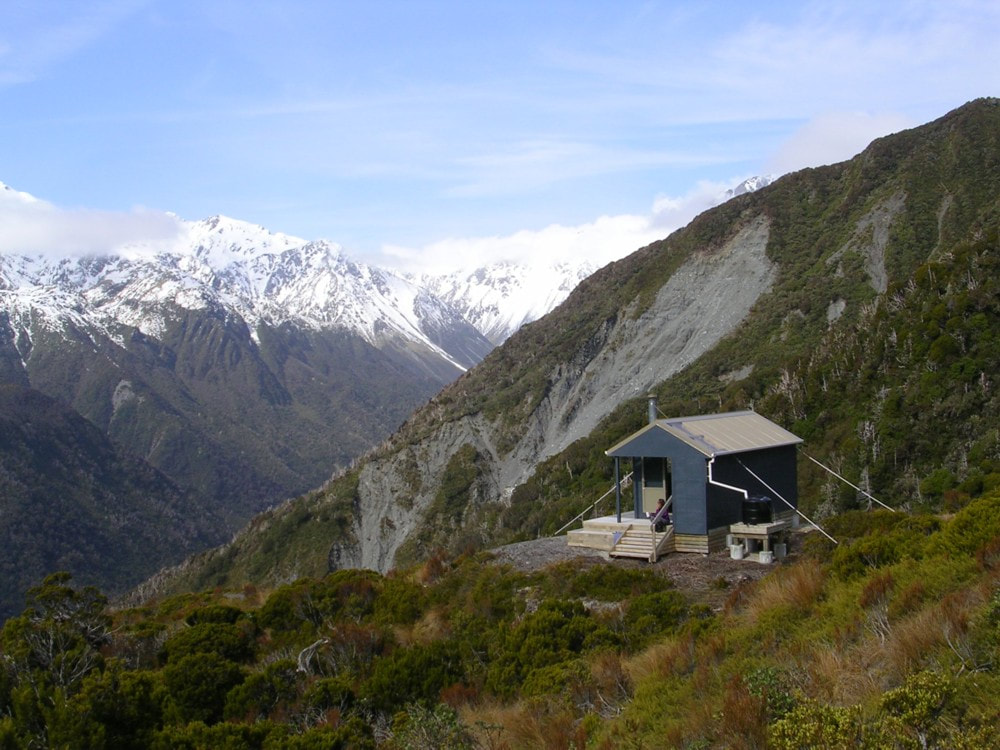 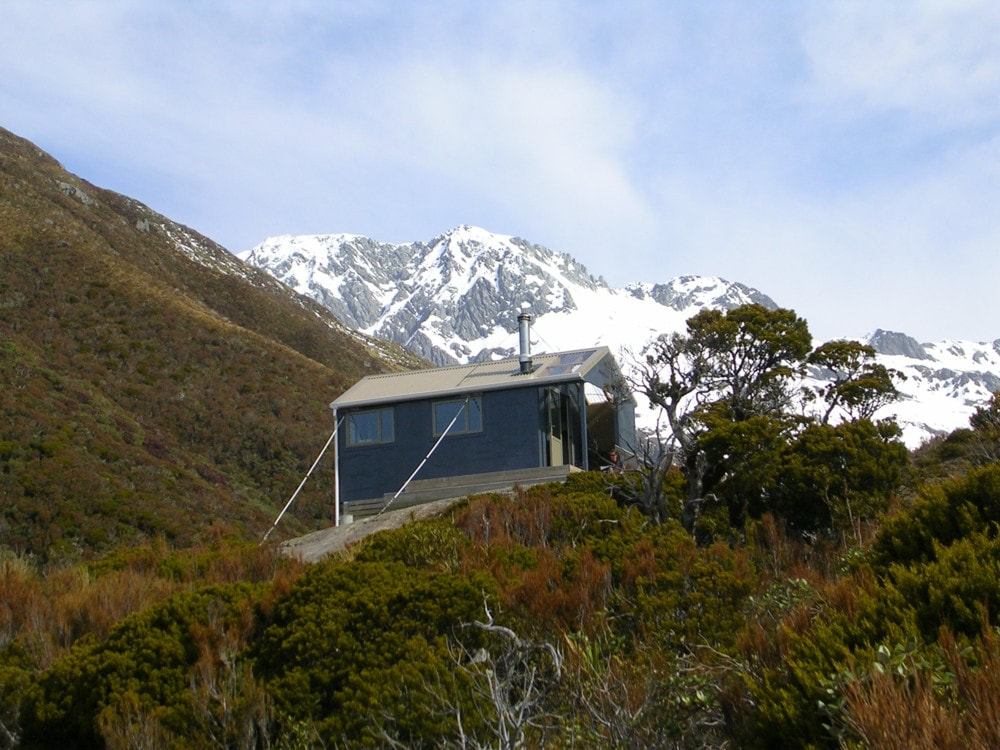 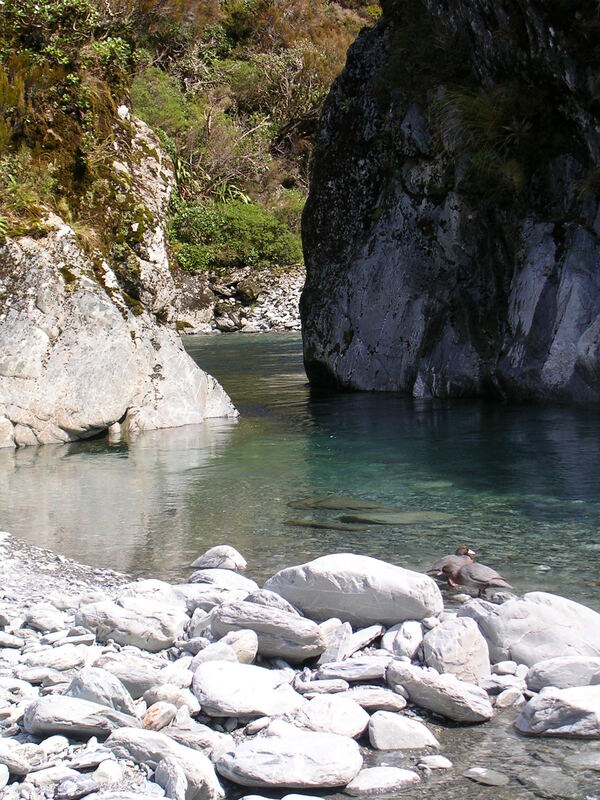 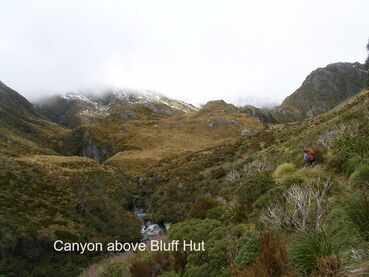 Maintenance Status
Bluff Hut and its access tracks and routes are fully maintained by DOC currently. Bluff Hut is situated on the Frew Saddle - Toaroha Saddle circuit which is a reasonably popular remote tramp that features in Shaun Barnett's revised edition of Classic Tramps.

Location
Hokitika catchment. Map BV19. Grid Ref: E1447431/ N5232293 (BV19 474 323). Altitude 925m. Bluff Hut is located in scattered alpine scrub on the TL of the upper Hokitika basin. The hut was moved from its original site on the bush edge a bit further down in 2009 due to it being geologically unstable there. Bluff got a total rebuild in the process. It now sits on a patch bare rock, well wired down, and commands exceptional views out over the Mungo valley. The access track from the Hokitika valley is very steep, climbing up through some spectacular and deeply fissured bush-cloaked bluffs. The Hokitika River drops to the Mungo confluence parallel to the track in a series of impressive waterfalls. Upriver from the Hut is a small canyon that opens out to an expansive tussock basin. This rises at a gentle gradient for several kilometres to Mathias Pass. An attempt to graze sheep in the basin in the late 1800's ended during the first winter when deep snow drifts buried the unfortunate animals. There is a Hut marked on an old NZMS map from 1919 on the TL between Tub and Steadman Creek, but I've not seen or heard of others seeing any remnants of it. 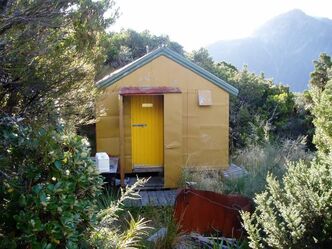 Original Hut at the old site in 2008 - Photo Brent Smith
Access
Bluff Hut can be accessed from the Hokitika roadend via the Whitcombe valley and Frew Saddle in 1.5-2 days. Access from the Toaroha end of the circuit is via Toaroha Saddle and the Mungo River and takes 2-2.5 days. The entire circuit is maintained by DOC and is in good shape currently.

The route to Bluff from Frew Saddle Biv is marked by snow poles from the top of the Saddle down a steep tussock face into into the upper Hokitika basin. When snow-free travel in the basin is easy and relatively fast. In winter route times can vary significantly depending on snow cover and conditions. A marked track starts around the 1040m contour and leads through scattered scrub on the TL bank to opposite Steadman Creek. Snow poles lead from here up and over a tussock knoll and down to a tracked section through the alpine scrub above the canyon. The track drops into the riverbed opposite Tub Creek and the river is followed to the start of a second canyon. A track exits here and sidles up through open tussock and patchy scrub to the Hut. Allow 2.5 - 3 hours to get from Frew Biv to Bluff Hut in good conditions.

The route to Bluff Hut from Poet Hut down the TR of the Mungo River is a mix of track and river travel. A recent large slip upstream of the Bluff swingbridge has just had a detour cut around it, adding a bit of extra climbing to the journey. Further downriver the Bluff swingbridge takes you over to the TL of the valley and the start of a track that climbs steeply up a bluffy spur on the TL of the Hokitika. When NZFS established this route in the 1960's they put ladders and chains on the steeper sections. DOC have removed these in their typical risk averse fashion  re-routed the track. As often is the case, it hasn't made things any safer or user-friendly.  The new sections are still very steep and the stumps of small trees that have been left as hand-holds will eventually rot and break. The track emerges at the bushline at the old hut site, and from here it is a couple of hundred metres through open country to the Hut. Allow 3.5 - 4.5 hours to reach Bluff Hut from Poet currently.

Type
Bluff Hut was built by the NZFS around 1962 and was a standard 4-bunk S81 design with open fire. The fire and chimney were removed early on, and the cupboard and vestibule area modified in the early 1980's to create more space. A roof-fed watertank was installed around the same time. Bluff became isolated from the Frew - Toaroha circuit and fell into disrepair for a period after the Hokitika swingbridge was washed out in the early 1990's. A new bridge was built in 2009 and the Hut was shifted from its original site and completely revamped in the process. The only original material still evident on Bluff Mark II seems to be the exterior flat-iron wall cladding. The revamped structure is longer, has two extra bunks, a wood burner, a porch, a deck, and double-glazed windows, including an extra one on the northern wall. The Hut is bolted onto an exposed rock bench and anchored with tie-downs.

Condition
Bluff Hut is in excellent condition currently. Some of the paint is starting to flake on the exterior wall cladding. There have been problems getting a decent hole dug for the toilet and it's already been shifted once. The new site below the Hut is a slight improvement, but it's still a splasher.

Routes
Sir Robert Hut can be accessed from Bluff via Tub Creek and Homeward Ridge. The Hokitika here isn't usually problematic to cross, and the TR fork of Tub Creek provide provides access to the gentle tussock faces of Homeward Ridge. Steadman Saddle is not a viable option for getting down onto into Sir Robert Creek as the terrain below it is steep and unstable. Continue instead down Homeward Ridge to the 1440m contour line (around 1449130E/ 5231595N (BV19 491 316)) and drop East here down a side-spur into the Sir Robert catchment. Drop in a SE direction from where the spur flattens at the 1250m mark into the tussock gut below. The gut becomes a small creek further down and passes through a band of ribbonwood, after which it cascades down a series of rock steps into a larger side-creek. It is a reasonably easy to scramble down this bit by sticking more or less to the creek bed. Follow the larger side-creek down to where it enters Sir Robert Creek, around 300m downstream from the Hut. Boulderhop up the TL to a short section of track that goes behind a large boulder, around 20m below where the track exits the Creek and climbs up to the Hut. Allow around 4-5 hours for the crossing from Bluff Hut to Sir Robert Hut in good conditions. Ice axes and possibly crampons may be necessary on the steeper sections leading down into Sir Robert Creek during the colder months. There is a moderate avalanche risk here also after heavy snowfalls.

Frisco Hut can be accessed down the TR of the Hokitika from the Bluff swingbridge. A short section of the old NZFS track from the bridge heading downriver was recut in 2017. It drops onto the riverbed which is then followed for 15 minutes to Darby Creek. The Creek would be uncrossable after heavy rain. The track starts 100m up Darby Creek on the TR and follows the ridge up to the 800m contour. There is a  fresh slip at around the 540m contour that Andrew Barker has cut a detour around. At 800m the track veers West and sidles downriver across the bush faces. The route crosses a series of old regenerating slips and a couple of actively eroding bits that need to be upclimbed to maintain the sidle. The open sections are marked with poles and cairns. After crossing the slips the track enters montane forest and sidles in and out of the upper branches of Detour Creek to the Hut. The track up the ridge was last recut in 2019 and the sidle section recut and marked in 2018. Allow 3.5-4.5 hours to reach Frisco from Bluff Hut.

There is a relatively straightforward high-level route from Bluff Hut to Frew Biv (or vice versa) over Conway Ridge. This shouldn't take a great deal longer than the valley route in good conditions, and has lovely views.

Mathias Pass is accessed by continuing up the upper Hokitika basin past the Frew Biv turnoff. Exit the River on the TL around the 1320m contour and head directly up the tussock face 140 vertical metres to the Pass. Canyon Creek basin is easy travel down to the 1000m contour where the old Dobson bench track leaves the valley and sidles above the TL. The track has fallen away in places and is not followable. Continue instead down along the tussock benches on the TR of the Creek then drop into the creek bed at the top entrance of the gorge in the lower reaches. The gorge is negotiable when flows are low, otherwise a detour is required up an obvious side-creek on the TR to the 1500 contour line on the NE ridge of Monarch Hill. Drop down the ridge from here to the Mathias/ Canyon Creek confluence. Allow around 7-9 hours for the journey from Bluff Hut to Canyon Creek Biv.

Provisions on Site
Two bench seats, a hand saw, an axe, a first aid kit, three billies, a small frypan, a camp oven, an aluminium wash basin, a hearth shovel and brush, a coal bucket, and a roll of red permolat. There are odds and sods of timber and a wooden ladder under the Hut. A lot of the original wood framing, and some sheets of corrugated iron, and the door are still stacked down at the original hut site.
Powered by