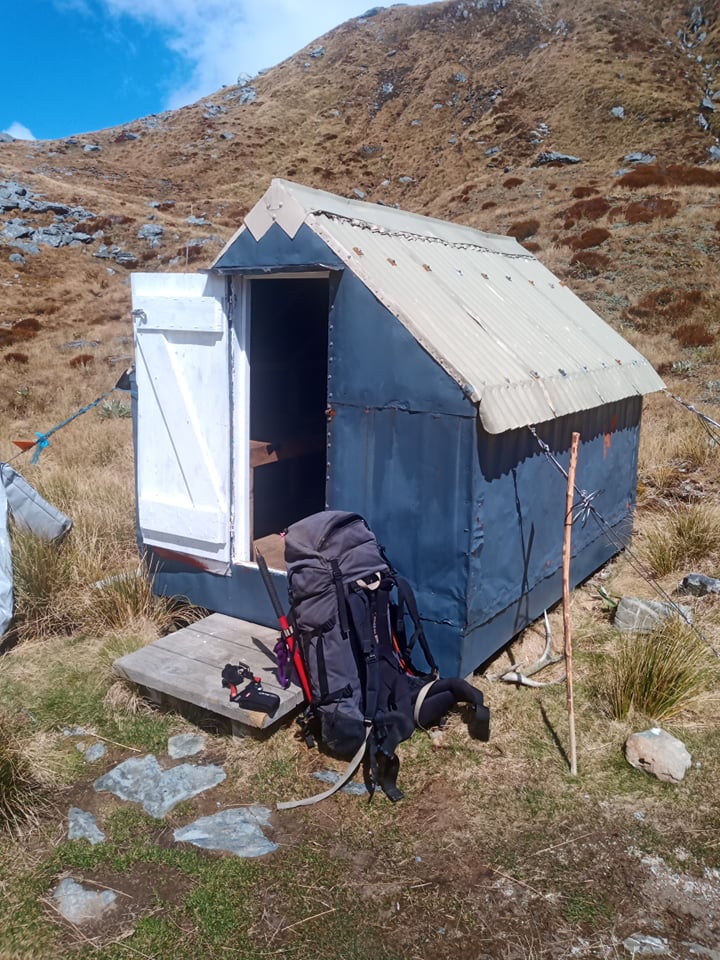 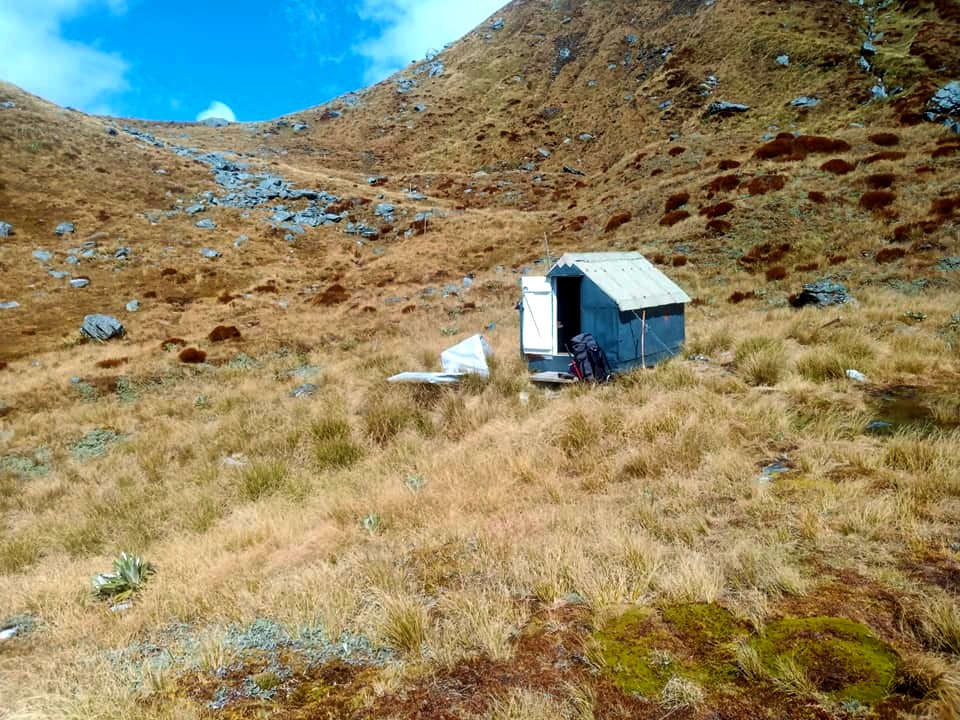 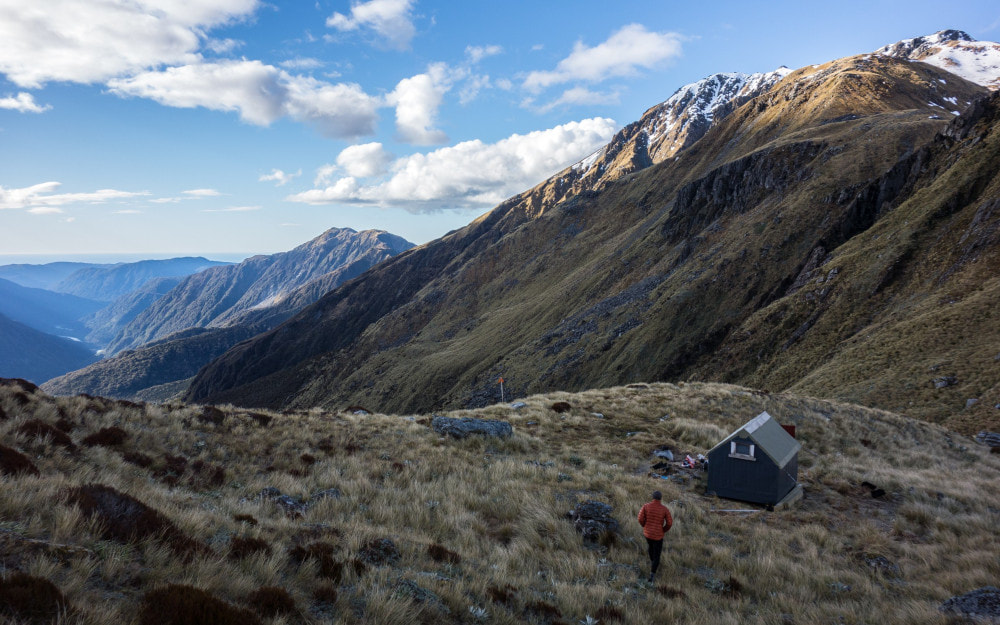 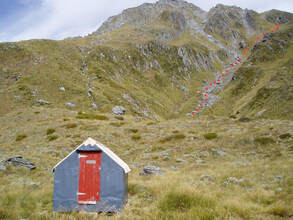 Tops access behind the Biv
Maintenance Status
Frew Saddle Biv and its access tracks and routes are fully maintained by DOC currently.

Location
Whitcombe catchment. Map BV19. Grid Ref: E1444680/ N5228763 (BV19 447 288). Altitude 1285m. Frew Saddle Biv is located in the head of Frew Creek, a couple of hundred metres from Frew Saddle. It is part of the Frew Saddle - Toaroha Saddle circuit, a 4 to 5-day tramp of moderate difficulty that is profiled in Shaun Barnett's revised edition of Classic Tramps. The Biv is also used as a stopover on crossings of Mathias Pass into Canterbury.

Access
It is possible for a fit person to reach Frew Biv in 8-10 hours from the Hokitika roadend, and the tracks are usually in very good condition. The only likely barriers are the creeks being up, or heavy snow on the approaches to the Biv during the colder months. It takes around four hours from the roadend to the Biv turn-off, which is on the TL of Tom Creek 15 minutes downriver from Frew Hut. The track leaves the main valley and climbs steeply onto a river terrace which it follows for around 30 minutes around into the Frew Creek catchment. There follows a climb/ sidle up the TR of Frew Creek along the old Dobson bench trackline, constructed in the 1880's as a stock and prospecting route over Mathias Pass to Canterbury. The remnants of an old hut are still visible on the side the track part-way up this section. This may have been built in 1906 by a Geological Survey team, or possibly earlier when the track was put in. The trail crosses a two deeply slotted side creeks that are spanned by ostentatious, and unnecessary trestle bridges. It drops back into Frew Creek at the 830m contour, crosses, and continues up a steepish section through the montane forest on the TL, towards the Creek's headwaters. A half hour of boulderhopping follows, followed by a poled route up a steep tussock face to the Biv. The track is regularly maintained by DOC and takes around 4-5 hours from Tom Creek. The top ford may become uncrossable after heavy rain.

Access to Frew Saddle Biv from Bluff Hut is via the upper Hokitika basin. From Bluff Hut the track drops at a gentle gradient into the Hokitika River, where a short section of boulderhopping follows. The track re-enters the scrub above Tub Creek and climbs up around a small canyon, before dropping back to the River. There is a short section of cut track through scattered scrub just above Steadman Creek, then open tussock and river travel. The upper basin rises gently and the River can be crossed and recrossed at leisure. Travel is easy most of the year, but the odd heavy snowfall in winter can turn it into a slow plod. A large cairn and a routered sign mark the beginning of a poled route up the steep tussock faces to Frew Saddle. Allow 2.5-3 hours for the journey from Bluff Hut to Frew Biv in good conditions. The tracked sections of the route are regularly maintained by DOC.

Type
Frew Saddle Biv was the first NZFS B49 two-person design built in central Westland. The materials were dropped in by fixed wing aircraft in the Winter of 1957. Jock Fisher and Merv O'Reilly of NZFS Hokitika needed two attempts to erect the Biv due to adverse weather. During the second attempt they camped and worked in the shell of the Biv while a snowstorm raged around them. Frew Biv has a corrugated iron roof and flat-iron walls that are lined with tar paper and chicken wire. It has two very short wooden sleeping platforms with mattresses on the side and end walls, and a small perspex window at the far end. The Biv is held fast with wire tie-downs. The Biv is slightly smaller than its successors, very pokey and dim, but a welcome shelter in a storm. A small stream a few metres away provides drinking water. There is no toilet.

Condition
Frew Biv is in reasonably good condition currently. It was repiled in 2003/ 4 by DOC, and repainted in March 2013. DOC replaced the tie downs at some point, running the end one through the structure instead of over the roof. When we visited in October 2018 there was water pooling on the end mattress. Not sure if there is a roof leak or the water had blown in the window which was not properly fastened. There were about 20 plastic containers, and other garbage left piling up. Seems people feel this is OK, but it has an encouraging effect to leave the place messy. Please cart your containers, batteries, and used gas canisters out.

Routes
Sir Robert Hut can be accessed via the Hokitka basin and Steadman Creek. Follow the poles from the Saddle down into the Hokitka, and the River down to Steadman Creek. Head up the ridge on the TR of Steadman Creek onto Homeward Ridge. This is a straightforward climb in good conditions. Continue down Homeward Ridge to the 1440m contour line (around 1449130E/ 5231595N (BV19 491 316)) and drop East down a side-spur into the Sir Robert catchment. The spur flattens briefly at the 1250m mark. Drop into the gut on its TR and follow this down through a band of small ribbonwod to where it becomes a small creek. This cascades over some rocky steps into a larger side-creek below. The steps can be downclimbed or skirted without too much difficulty. Once in the main side-creek, continue down 200 or so metres to its confluence with Sir Robert Creek, and head upstream on the TL. The entrance to the Hut is around 400m up from the side-creek and is cairned and cruise-taped. Allow 4-5 hours for the journey from Frew Saddle Biv to Sir Robert Hut. Steadman Saddle very steep and unstable on the Sir Robert side and is not recommended as a route to the Hut. Ice axes and possibly crampons may be necessary in winter and early spring for the descent off Homeward Ridge. There is also a moderate avalanche risk on this section following heavy snowfalls.

The Mathias Pass crossing is very straightforward from the Biv and involves dropping into the Hokitika basin and heading directly up the riverbed. Exit the basin around the 1320m contour and climb straight up the tussock faces 140 vertical metres to the Pass. The upper basin of Canyon Creek is easy travel down to the 1000m contour. The old Dobson bench track sidles above the TL of the Creek from this point, but has fallen away in places and is not worth trying to follow. Travel instead along the tussock benches on the TR and wade the gorge in the lower section of the Creek. The lower section of the gorge is only negotiable when flows are low. The alternative is to climb out of the Creek up a side-creek on the TR to the 1500 contour line on the NE ridge of Monarch Hill. Drop down the ridge from here to the Mathias/ Canyon Creek confluence. Allow around five hours for the journey from Frew Biv to Canyon Creek Biv in good conditions.

The Whitcombe Tops are traversable in both directions from Frew Biv. A relatively simple and enjoyable high-level crossing of the Meta Range and Conway Ridge can be done to Bluff Hut as an alternative to the main valley route, and shouldn't take much longer in good conditions.

Travel NW of Mt. Meta is OK only as far as the 1100m contour where the Meta Range dips into the scrub just before Meta Saddle. I don't know of anyone who has done this bit through to Mt. Inframeta, or if it is doable. Travel along to Mt. Inframeta from the point where the Range re-emerges from the scrub above Meta Saddle is mostly good, although there are several points where the Range dips into the scrub again, before and after point 1325m. The passage through these bit is mostly OK due to a very well-used animal trail.

An old tops track up from Tom Creek that emerges at the tussock South of point 1235m, around E1442808/ N5232655 (BV18 428 327) was recut and marked by Glenn Johnston and John Hut in 2013. Another possible option is to continue NW from Mt. Inframeta and drop down an ancient NZFS track to the Hokitika - Whitcombe Junction. This hasn't been cut for over 40 years, so good luck in locating and following that one. Also, you'd need to be able to ford either the Whitcombe, or the Hokitika once you got down, to get to the roadend.

The crest of the range South of Frew Biv is only OK as far as the approaches to point 1921m, after which there are impassable vertical sections with rotten rock. A sidle on the Whitcombe side into the heads of Harcourt and Vincent Creek will get you around this troublesome bit with access up a scree on the TL of the creek that drains Frew Saddle. Sidle from the top of the scree onto a flat area around the 1640m contour, NW of point 1860m. Drop down some steep tussock faces and rocky guts just East of the point, into Harcourt Creek. Follow Harcourt Creek down to just above the 1000m contour, exit on the TL, and sidle SW into the upper Vincent Creek basin. A band of alpine scrub needs to be negotiated here, but there are some reasonable lines through this. Drop into Vincent Creek just above a beautiful sculped rock mini canyon and follow the creek from here up to Kea Pass. The Whitcombe tops are theoretically traverseable from Kea Pass all the way along to Whitcombe Pass.

Provisions on site
The ubiquitous DOC hearth brush and shovel. Very little else from memory.
Powered by