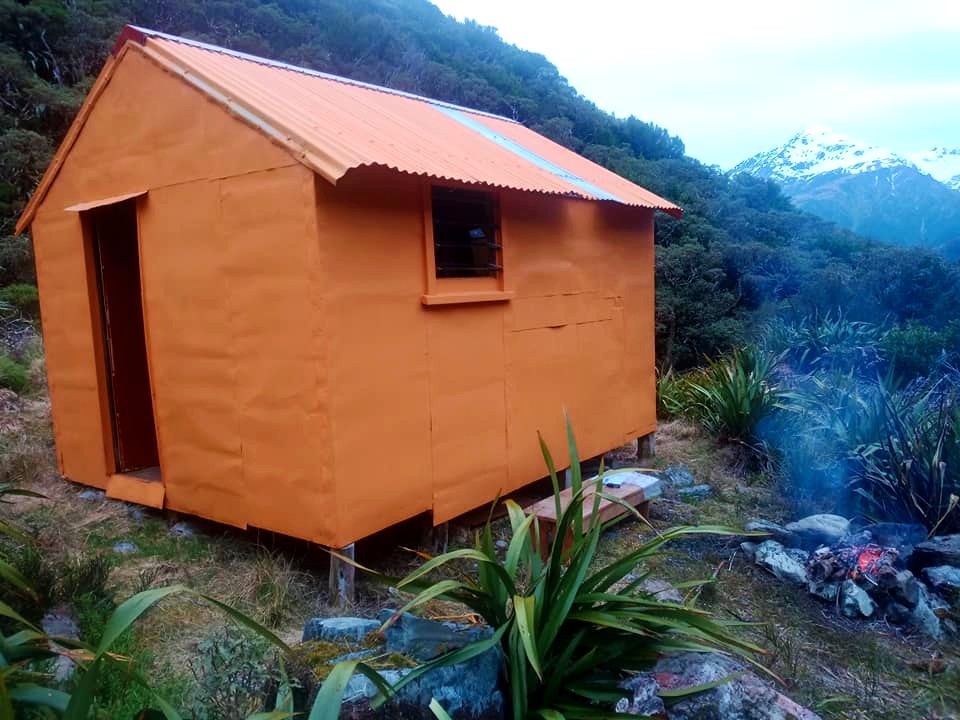 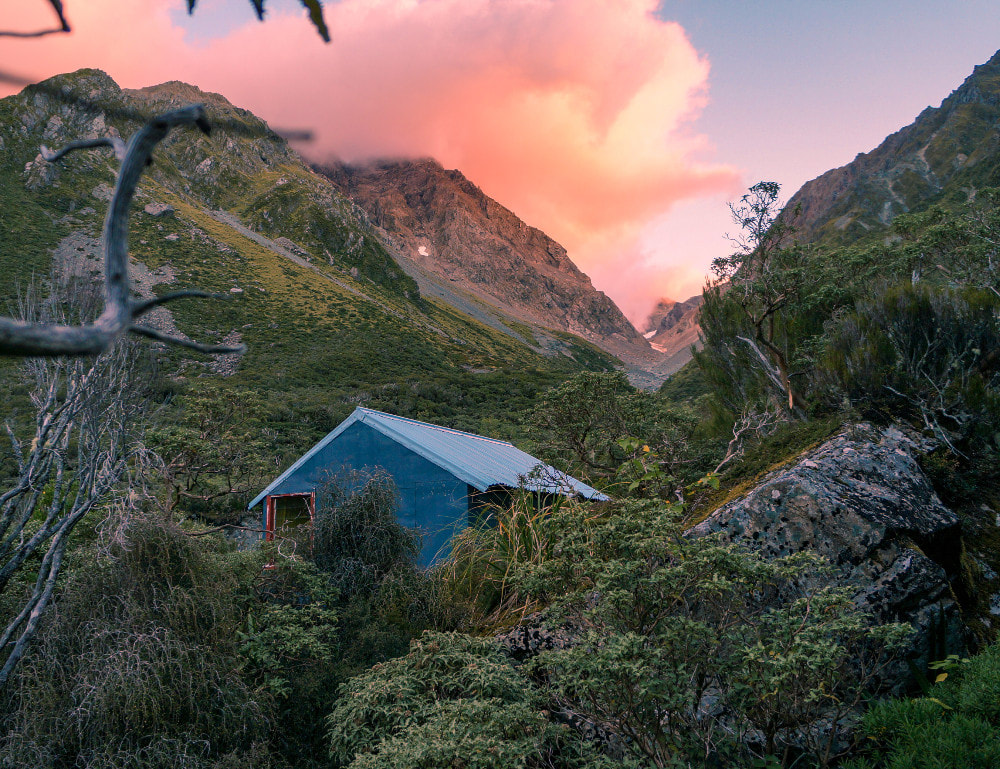 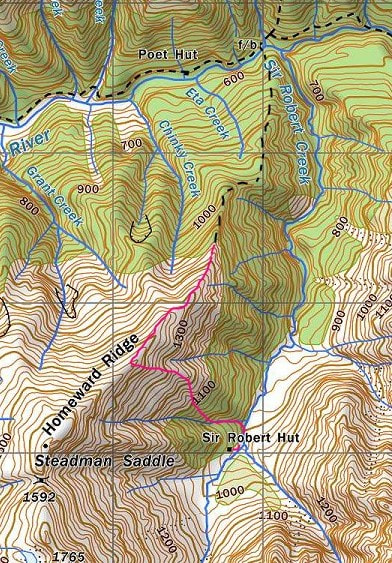 Maintenance Status
Sir Robert Hut is designated as minimal maintenance. A swingbridge just downriver from Beta Creek provides a safe crossing of the Mungo. A track up Homeward Ridge that provides access is no longer officially maintained but will continue to be looked after by Permolat. The swingbridge was replaced by DOC in 2021 probably to provide an alternative to the Poet - Bluff section of the Frew - Toaroha circuit which has been badly damaged by slips. In December of 2016 Paul Reid of Permolat received some High Country Consortium funding to carry out maintenance on Sir Robert, and a party reroofed the Hut, repainted it, and did some more maintenance and site clearance in March 2018. In April 2019 Andre and Corina Winkleman recut and marked the track up Homeward Ridge.

Location
Hokitika catchment. Map BV19. Grid Ref: E1449755/ N5231014 (BV19 498 310). Altitude 955m. Sir Robert Hut is located in the TL head of Sir Robert Creek in the Mungo valley. The Creek backs onto the Main Divide, and it's a spectacular, rough, and remote bit of country. The lower reaches of the Creek are gorged and impassable, and access to the Hut is exclusively over the tops. Sir Robert is one of the most seldom visited Huts in the area. In the past, 2-3 year gaps between visits were not uncommon. Profiling it on this site has helped, with eight parties visiting in 2017. Relatively easy alpine crossings are possible from the head of Sir Robert Creek over to the North Mathias catchment in Canterbury. The peaks on the Divide North of the Hut have been seldom climbed since Roger Chester, John Pascoe and Allan Willis made 11 first ascents in one day back in 1930. 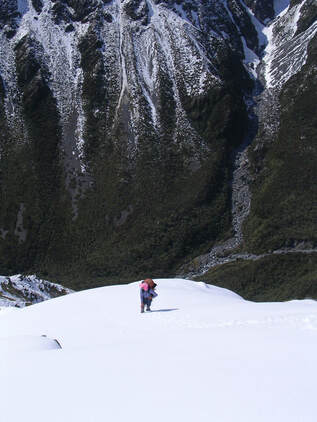 Climbing out of Sir Robert Creek back onto Homeward Ridge: Photo Andrew Buglass
Access
Sir Robert Hut can be accessed on the West Coast side from the Hokitika, or Toaroha roadends. From Canterbury the most direct approach is up the Mathias River and Canyon Creek. All approaches require a minimum of two days travel, along with reasonably high fitness and experience levels. Access to Sir Robert from the Mungo valley is up Homeward Ridge. The Ridge track is currently in reasonable order with a bit of regen coming back in a few places. A swingbridge just below Beta Creek, around 20 minutes upriver from Poet Hut, provides a safe crossing of the River. The track crosses a terrace a short distance before veering up the Ridge which is followed to the 1440m contour line (around 1449130E/ 5231595N (BV19 491 316)). The drop-off to the Hut commences here down a side-spur that descends East towards Sir Robert Creek. Ice axes and possibly crampons may be needed in winter and early spring for the top section, which can be icy. Where the side-spur flattens briefly around the 1250m mark, drop into the gut on the spur's TR and follow this down. The gut turns into a small stream, which can be negotiated through a band of mountain ribbonwood and a series of small cascades to the larger side-creek below. Follow the side-creek down to Sir Robert Creek and head up its TL for around 300m to where a cairn and cruise-tape mark a short track up to the Hut. Allow 5-6 hours to Sir Robert Hut from Poet Hut in good conditions.

Access to Sir Robert from the Hokitika roadend is over Frew Saddle and into the upper Hokitika Basin. A poled route leads from Frew Saddle Biv down into the Hokitika. Continue downriver to Steadman Creek. Travel is easy in summer and autumn along the tussock flats and riverbanks, however in winter deep snow often clogs the basin slowing progress considerably. Exit the basin at Steadman Creek and head up the ridge on its TR onto Homeward Ridge. This is all open travel. Head down Homeward Ridge to the drop-off point for the Poet route. Avoid dropping directly from Steadman Saddle into Sir Robert Creek, as it's very steep and unstable at the top. Allow 4-5 hours from Frew Saddle Biv to Sir Robert Hut. 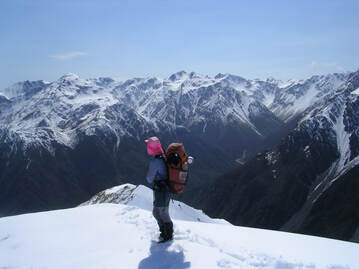 Homeward Ridge looking up the Mungo: Photo Andrew Buglass
Access to Sir Robert from Bluff Hut is also straightforward in good conditions. Head back up the Frew Saddle track to where it hits the riverbed downstream of Tub Creek. Ford and head up Tub Creek taking the larger and easier looking TR fork onto the Homeward Ridge tops. The drop-off is into Sir Robert is the same as the Poet route. Allow around four hours for the crossing from Bluff to Sir Robert Hut.

Type
Sir Robert is a standard NZFS S81 four-bunk design built in 1963. In 1983 NZFS lined the Hut and flew a loo in constructed from materials salvaged from the dismantled Lower Toaroha and Lower Kokatahi huts. Water is from the Creek. There is no form of heating in the Hut.

Condition
Sir Robert Hut is in reasonably good condition. The last DOC maintenance took place in the Summer of 2003/4 and comprised external painting, sealing and some minor repair work. In the ensuing years moisture was affecting the end wall and floor just under the bench table, where the floorboards were damp and wall lining buckling. In March 2018 Paul's work crew comprising Alan Jemison, James Clark and Kerry Mallard, sealed and painted the Hut, replaced the ridging, skylight, and a pile, and did some scrub clearance around the Hut. Unfortunately the ridging replacement didn't deal to the leak which is in the North wall near the ceiling and NE corner. The inner ply lining is peeling and there are damp patches on the walls and floor. Paint is also peeling off one of the window sills.

Routes
There is a low route into Sir Robert Creek down a steep gut from the 940m contour on Homeward Ridge (around 1449957E/ 5232801N (BV19 500 328)), however I only know of it being used once, and that was in the mid-1980's. It would certainly avoid a considerable amount of climbing, but involve negotiating a rough gorgy section of riverbed in the mid section of the Creek. It may work as an alternative if the tops were clagged in, or unsafe due to snow, or ice, but not if the Creek was running high.

Accessing Sir Robert Hut from the Canterbury side is up the Mathias River and Canyon Creek. The gorge in the lower part of Canyon Creek can be walked up at low flows. The alternative is a long climb up the NE ridge of Monarch Hill from the Mathias/ Canyon Creek confluence. Drop from the flat bench at the 1500m mark on the ridge down into the side-creek below and follow this back into Canyon Creek. The old bench track on the TL of Canyon Creek has fallen away in places and the best route now upstream of the gorge is along the tussock benches on the TR. The Creek Passes under Mathias Pass and curves NE towards the Main Divide. The crossing into Sir Robert Creek through the col between point 1964m and Mt. Treager is reasonably straightforward. Ice axes and possibly crampons will be required during the colder months.

A reasonably challenging high-level crossing is possible from Sir Robert to Mungo Hut over Brunswick Ridge. Head down Sir Robert Creek from the Hut to the first big side creek on the TR and follow this up a short distance. Exit up the large scree that comes in on its TR at E1451202/ N5231174 (BV19 512 312), and follow this up taking a steep side-scree on its TL to access the low point on Brunswick Ridge below Kai Iwi (around E1451900/ N5231240 (BV19 519 312)). The top of this route is very steep and could be icy when snow covered. There is also some rock-fall risk from the faces above the main scree, so care needs to be taken.
Travel down Brunswick Ridge is straightforward and the drop-off into the Brunswick is down a prominent NE-running spur that enters the Creek at around E1452882/ N5232300 (BV19 529 323).

The Brunswick is fair-sized stream and swift lower down, so it may be easier to ford in its middle reaches and travel the last bit down the TR. Boulderhop from the confluence up the TL of the Mungo and ford the Mungo opposite entrance to the track up to Mungo Hut 100m up from the Park confluence (marked by a large orange triangle). It is a steep 15 minute climb from the riverbed up onto the bench where the Hut is located. Allow around six hours for the journey from Sir Robert Hut to Mungo Hut in good conditions. Crampons and ice axes would be a minimum requirement in the colder months.

Repairs needed
Roof and/ or cladding repairs are needed to sort the leak out. The window sill needs repainting. Some regen clearance on the Ridge track will be required in the medium term.

Provisions on Site
A hearth broom and shovel, an NZFS issue straw broom, a normal broom, two shovels, two axes, a very blunt slasher, a camp oven (no lid), a plastic wash basin, four spare glass louvre panes, 10 perspex panes, and a roll of tar paper. There is an interesting collection of old magazines in the Hut including Time and Outdoors from the early 1970's, and some British Women's Own magazines from the mid-1960's which are a real hoot to look at now. Under the Hut are assorted bits of timber including tongue and groove, small sheets of flat iron, a sheet of corrugated iron, a wooden ladder, and a small roll of barbed wire.
Powered by