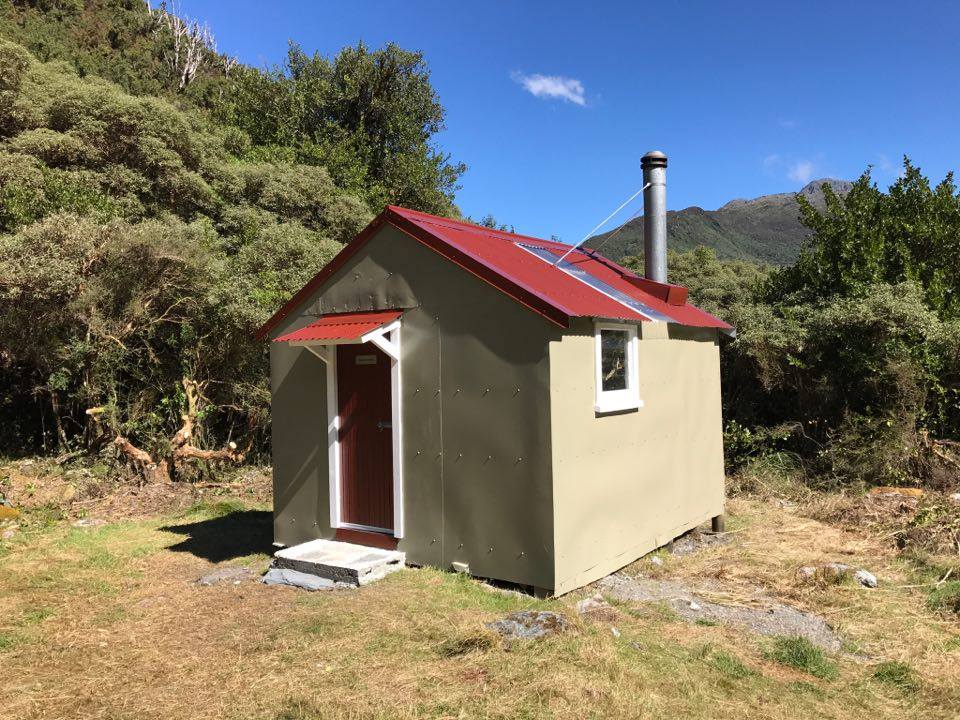 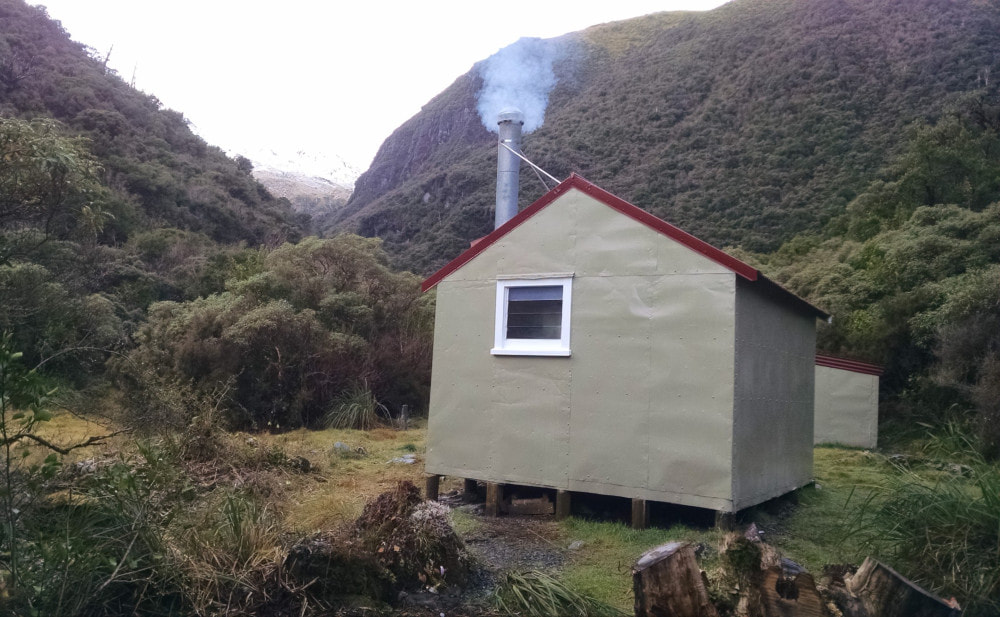 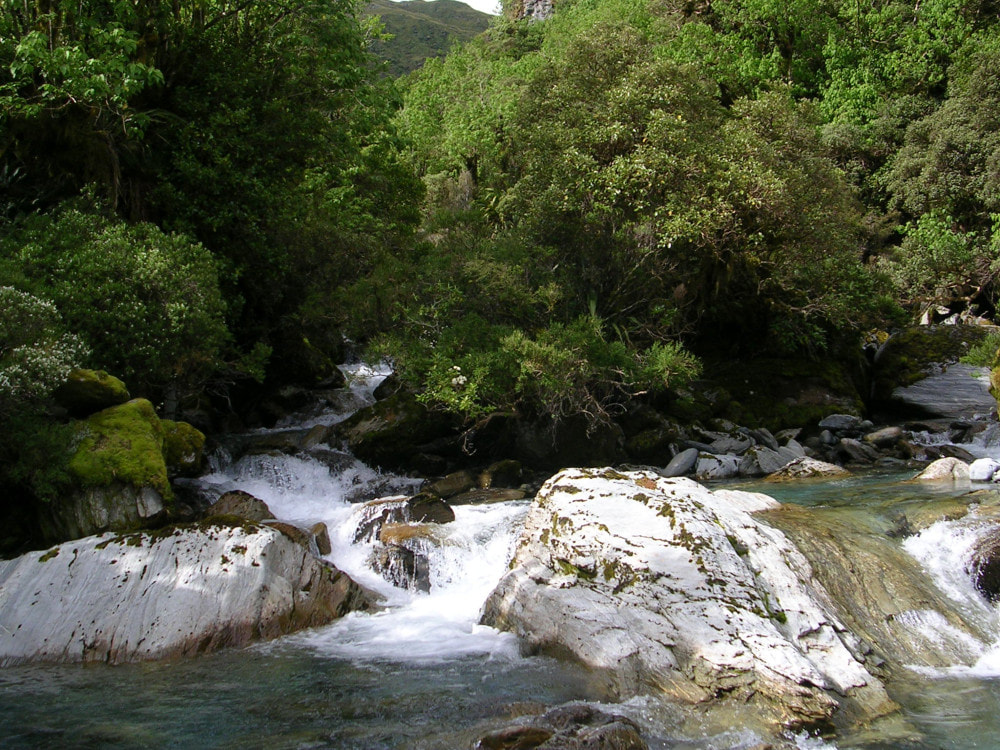 Maintenance Status
Newton Creek Hut and its access tracks and routes are designated as fully maintain. The tracks are in good shape, but the Hut had become very run-down with a fairly serious rat infestation. With DOC's support and some Consortium and Permolat funding, Rob Brown of Permolat put a team together and did some major maintenance in February 2017. After the rebuild it should be no problem for DOC to keep this Hut on their maintain schedule. DOC are continuing to maintain the access tracks from The Arahura valley and over Newton Saddle from the Taipo.

Location
Arahura catchment. Map BV19. Grid Ref: E1467495/ N5255620 (BV19 675 556). Altitude 725m. Newton Creek Hut is located at the lower end of the Newton Creek basin, one of the bigger side-catchments in the Arahura valley. The Creek drops steeply from the basin in a series of cataracts down to the main River. The basin is narrow and shady and is ringed by the peaks of the Campbell and Tara Tama ranges. The Hut is a reasonably popular stopover on the Newton Saddle circuit which links the Arahura and Taipo valleys, getting 10-20 visits per year currently. Newton Creek is untracked upstream of the Hut and is rough and bouldery initially. Above the bushline the valley opens out into fairly gentle tussock expanses, which provide good tops access to several other remote huts and bivs in the area.
During the 1980's and 90's Newton Creek Hut received minimal attention from DOC, but was kept clean and well provisioned by Alan Reith, a blue duck enthusiast from Hokitika. In 2004 the Hut was stripped of its NZFS provisions and some of Allan's gear in a DOC purge aimed at, "encouraging greater self-sufficiency in the high-country." An interesting and quite comprehensive hut library was removed in the process. A concerned member of the tramping fraternity who was passing by rescued a camp oven and some billies from a slingload of "rubbish" destined for the Hokitika Dump, and stowed them back in the Hut.

Access
The main Arahura valley tracks are maintained regularly by DOC and are in good condition currently. The track from Lower Arahura Hut follows an old dozer trail for 20 minutes to a large unnamed side-creek, and heads up this for 10 minutes or so to connect with the old Browning Pass bench track. This is followed for around an hour and a half as it climb/ sidles at a gentle gradient along the bush faces of the Arahura. The Newton Creek turnoff is marked by a routered sign, a short distance before Third Gorge Creek. The Newton track drops steeply down to the River here and crosses a swingbridge to the TR. The River is followed for around 10 minutes to the main track entrance, a short distance downstream from a small side-creek with a conspicuous waterfall, opposite Third Gorge Creek. The track follows the TR of creek a short distance, then veers North and climbs steeply up the bush faces of pt 754m, levelling at the 700m contour, and crossing a low ridge into Newton Creek Basin. It is 15 minutes walk from here up the TL of Newton Creek to the Hut. The track from the main valley turnoff to Newton Creek Hut was retrimmed in 2018. Allow around 3-4 hours for the journey from Lower Arahura Hut, or 7-8 hours from the Arahura roadend.

For those accessing Newton Creek Hut downriver from Mudflats Hut there are a couple of options. An old NZFS track on the TR of the Third Gorge has been recut in a rudimentary fashion by DOC as a stoatline, however the benched and slightly longer main valley track on the TL is probably quicker and more user-friendly. Allow two hours for the journey from Mudflats to Newton.
Access to Newton Creek from the Taipo valley is via Newton Saddle and Dunns Hut. The route goes up the TR branch of Dunns Creek and is tracked around the rougher, more bouldery bits. Snow-poles mark the route above the scrubline. The route on the Newton Creek side is down a gut into a steep side stream, which is followed all the way down to Newton Creek. The side-creek is shady and the boulders are often icy in winter. The gut leading down from the Saddle into the side-creek is usually snow filled in winter, and can also be icy. Ice axes are recommended at these times. Big variations in the travel times for the crossing can be seen in both hutbooks, reflecting the wide range in fitness and experience of those doing it, and the greatly differing weather and snow conditions that can be encountered. An average time in good conditions commensurate with other track times on this site would be 4-5 hours. DOC recut the tracked sections from Newton to Dunns in January 2021. 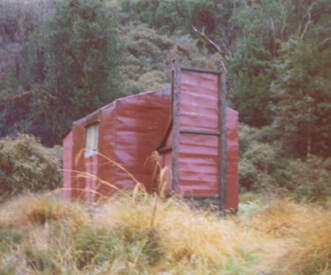 Original Newton Creek Hut - Phot Glenn Johnston 1975
Type
Newton Creek Hut is a standard NZFS S81, 4-bunk design. It was built in 1962 to replace an old internal affairs hut already on the site. Newton had an open fire initially, and this was removed in the late 1970's and replaced with a wood burner. The Hut interior was lined at some point. Water is from the Creek, and there is a toilet. A woodshed was added in 2017. The Hut site is fairly shady, and damp, and doesn't get much sun in the winter. Finding dry firewood can be an issue and folk don't always replace what they use. It can take a bit of time and energy fossicking dead standing wood from the bush surrounds, or the odd bit of driftwood from the creekbed.

Condition
Newton Creek Hut was repainted inside and out and resealed, by DOC in 2004. A fairly severe rat infestation developed around 2012, with the animals chewing their way in at several key locations. The smell in the Hut could get quite overpowering with rat shit often accumulating in thick pockets. The situation seemed to have had a flow-on effect on the human visitors, who began to leave their own trash behind. A fair amount of the framing, floor abutting the walls, and some of the sub floor framing and piles, was rotting, and holes had developed. The roof and woodshed also needed replacing. Rob and his crew, Eric Saggers, Peter Mortlock, and John Charles, effectively did a rebuild, stripping the Hut back to its frame and rebuilding and relining it. 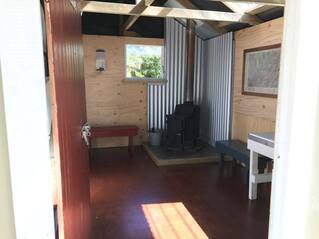 Refurbished Hut interior 2017
The work was done to a higher weatherproofing standard than the original build and subsequent repairs. Malthoid was used as a moisture barrier between piles, floor and bottom plates, and corner flashings added. Some new piles were added to increase strength. The team were working against the weather however, and didn't get the roof painting finished, or the flue back in. DOC kindly went in and finished the work in March. The woodburner's hearth was poured directly onto the floor way back when DOC installed it. This leaves the floor beneath permanently damp, and unable to dry out properly. Over time it will slowly rot out, and will need attending to longer-term. A new woodshed was constructed by the work crew. I cleaned up the toi toi on the track sections in the basin.

Dunns Saddle routes
Routes
Dunns Saddle lies only a kilometre North of Newton Saddle, but is not a particularly practical alternative as a crossing. The approach from the Dunns side up the TL branch of the Creek is fairly easy (with some avalanche risk from the Tara Tama side after heavy snowfalls), but the Newton Creek side it is very steep and bluffy with access up or down a single steep rock gut. Travel down Newton Creek from here is through untracked sub-alpine and montane forest. A cascade with large boulders just upstream of the Newton Saddle turnoff can be skirted on the TR. Those who want to have a look at Dunns Saddle can access it directly from the Dunns side and then do an easy traverse Mt. Eidelweiss back over to Newton Saddle. This wouldn't add that much extra time to the standard crossing.

A number of high-level routes are possible from the head of Newton Creek via the Tara Tama Range. The bouldery section of the Creek just upstream from the Hut can be skirted through the bush on the TR. Further up it is mostly boulderhopping with the odd detour into the scrub to reach the open tussock in the headwaters.

Top Olderog Biv can be accessed over Mt. Olson via a dry rock gut that enters Newton Creek around the 820m contour. There is band of bluffs above the gut that must be negotiated to gain access to the summit of Olson. The ridge dividing the Olderog and Wainihinihi catchments below point 1566m it is difficult and unpleasant travel with some exposed, vertical sections. It is easier and safer to drop down the gut from the col between Mt. Olson and point 1566m into the head of Olderog Creek. Travel down Olderog Creek is straightforward with a couple of small cascades to skirt further down. Exit the main Creek up a side-creek that comes in at E1464688/ N5257080 (BV19 647 571). Climb to around the 1240m contour and sidle out of the side-creek over to the bench where the Biv is located. Allow 6-7 hours for the crossing from Newton Hut to Top Olderog Biv.

Griffin Creek Hut has historically been accessed from the head of Newton Creek basin. by dropping from the unnamed saddle 200m South of Scottys Saddle, which has a large boulder with a cairn on top of it. A steep scree leads into the unnamed creek below, and this is followed down into the Griffin. A waterfall in the alpine scrub zone can be skirted on the TR. At around the 1000m contour there is another set of waterfalls which up until recently could be downclimbed. Changes to the streambed have mad this impossible leaving the choice of using a rope or climbing out of the creek on the TL onto a steep side-ridge with very thick alpine scrub and dropping down this. Once back in the creek the gradient lessens and the going becomes easier as you get further down. The Rocky Creek track crosses the creek 400m above its confluence with the Griffin. Follow the track down the TL of the creek down to where it intersects the main valley track. Griffin Creek Hut is around 15 minutes upriver from here.

Scottys Biv can also be accessed along the crest of the Tara Tama Range as far as Scottys Saddle. It is a 20 minute descent from here in an ESE direction down a series of tussock tussock with shattered rock outcrops. The Biv is clearly visible in good weather from point 1516m onwards.

At around 675m on the Lower Olderog Biv track an old NZFS track branches off and drops down into the mid section of Olderog Creek. This was part of an old trackline that went along The Trench to Newton Creek, but hasn't been maintained for 50 years. The Trench itself is relatively easy creek travel, but the tracked sections down into Olderog Creek and from the head of The Trench to Newton Creek have vanished, and it's a real grovel. Interest has been expressed by a few Permolatters about reopening The Trench and creating a link between Lower Olderog Biv and Newton Creek Hut. It'd be a fairly major project, but we'll see.

Provisions On Site
An axe, a handsaw and spare blade, a camp oven, a stainless steel bucket, An aluminium bucket, one billy, a Forest Service food bin, two hand brushes and a broom. Two 'Departure Lounge' vermin bait stations. One underneath the south east end of the hut and one inside under a bunk. There is a wooden ladder, a spare 4x2 and other bits of timber under the Hut.
Powered by