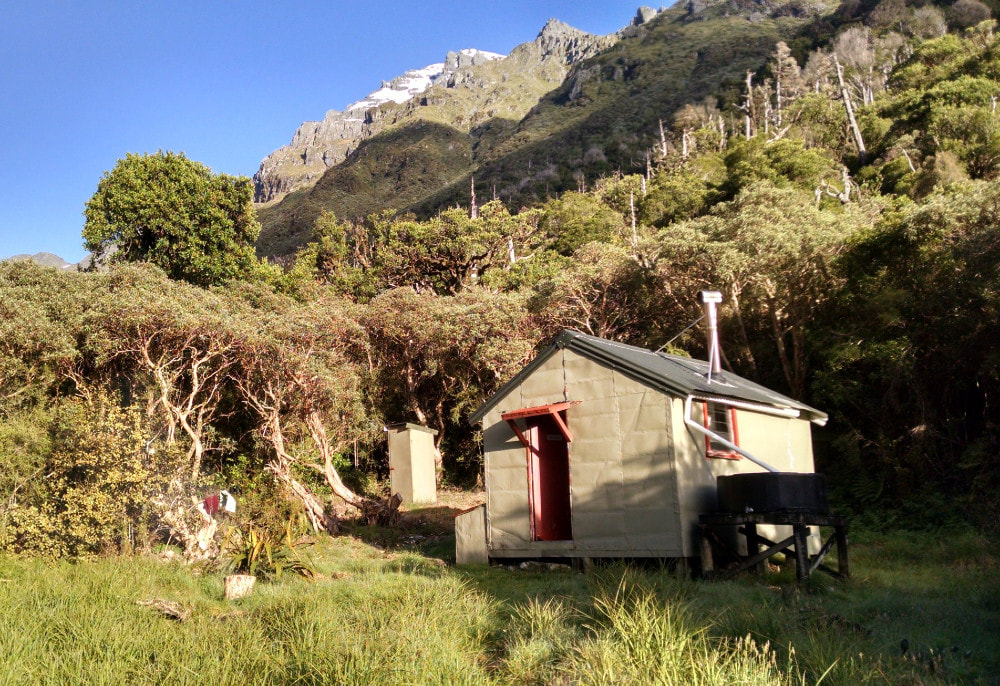 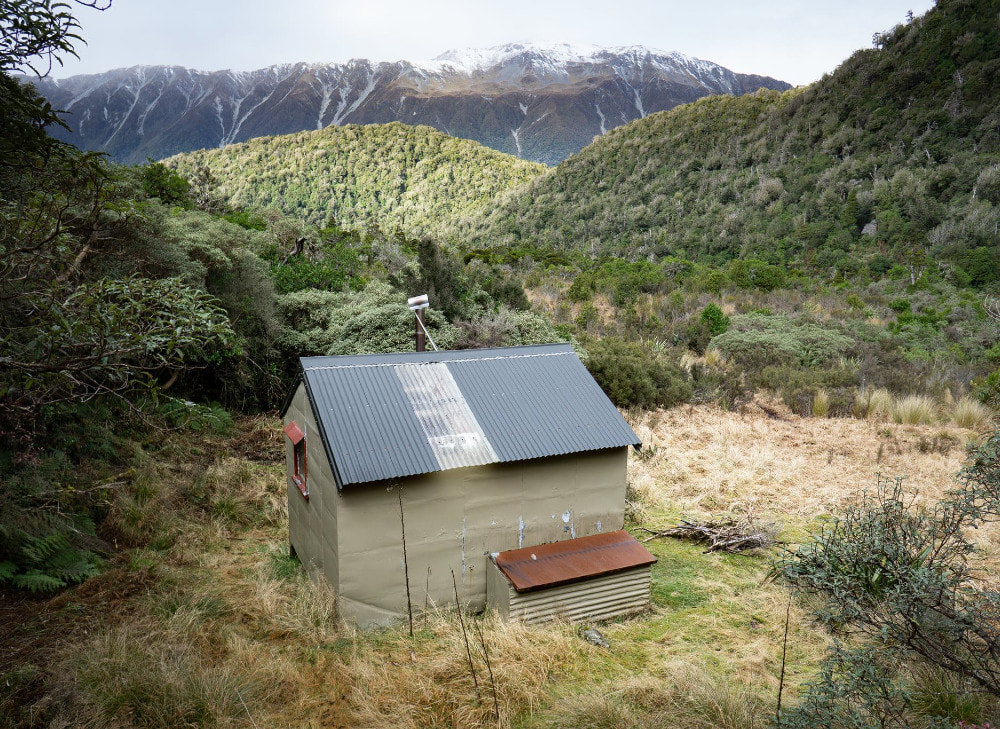 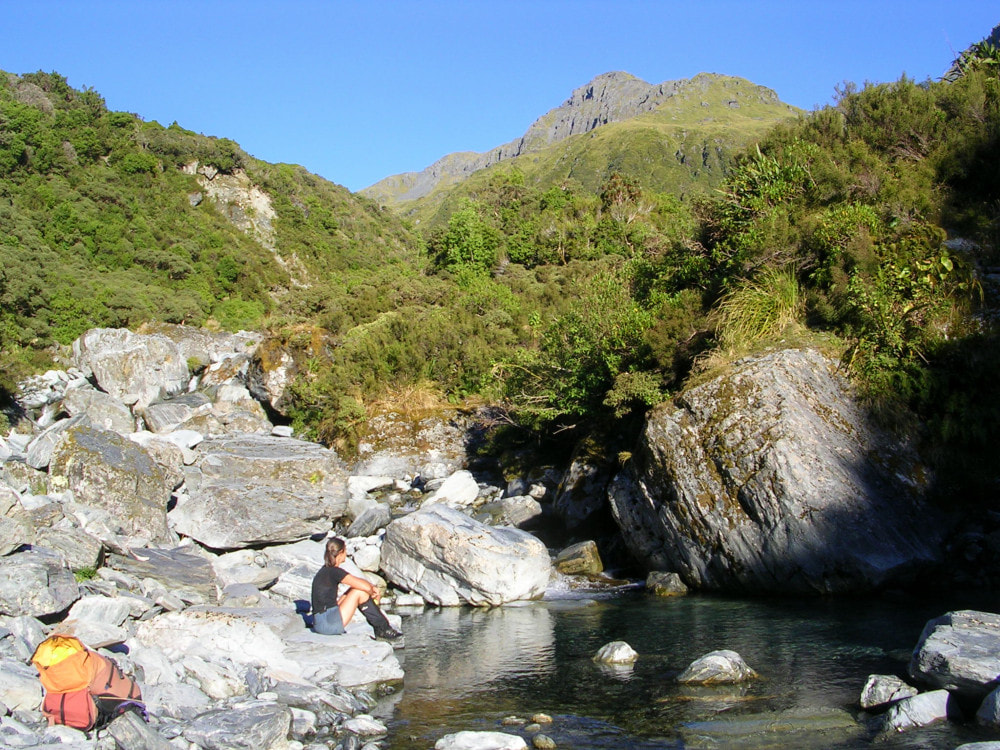 Maintenance Status
Dunns Hut is a DOC fully maintain hut which has only received minimal attention in recent years and is now in need of some urgent TLC. Hugh van Noorden of Permolat has had a funding application approved by the BCT to do a major overhaul. John Abbot and group Governors Bay volunteer Firefighters will be carrying out the bulk of the work. hopefully some time this winter Dunns is located on the fully maintained Arahura - Taipo circuit and the tracked sections of the route from Mid Taipo Hut and Newton Creek in the Arahura were recut by DOC in 2021. An alternative route up the TL of Dunns Creek from the Taipo valley has been kept open and in reasonably good shape by Permolat volunteers.

Location
Taipo catchment. Map BV20. Grid Ref: E1471566/ N5256348 (BV20 716 563). Altitude 705m. Dunns Hut is located in the mid-section of Dunns Creek, tucked against the forest edge next to an open marshy area. Dunns basin is ringed by the peaks of the Campbell and Tara Tama Ranges. Downriver from the Hut the Creek drops down a series of waterfalls before flattening and flowing into the Taipo River. Dunns can be accessed in a reasonably short day from the Taipo roadend by an averagely fit party. A good proportion of the Hut's visitors are doing the Newton Saddle circuit to or from Newton Creek Hut in the Arahura valley. Dunns is a great location just to hang out and relax, and a climb of Tara Tama makes for a good day outing. A small tribe of weka that inhabit the area help keep the visitors entertained.

Access
The access road up the TR of the Taipo from SH73 has been steadily deteriorating over the years and was washed out on the first river flat in 2018. The usable bit up and around the back of Point 338m is marginal at best for 2WD, so most are choosing to park at the DOC carpark next to the highway and walk this as well. High stud 4WD vehicles may still be able to get to the old FS Hut at the Seven Mile, but for most it's a seven kilometre walk from the highway. The old Hut is now the property of the landowner and is padlocked. Seven Mile Creek can be difficult to ford after heavy rain and Dillon Hut and the old Dillon Homestead are located just above it. A track leads from the new Hut up the TR of the valley to a three-wire above Scottys Creek where the main valley route crosses to the TL. An initial short steep climb around a bluff on the TL can be avoided when the River is low by staying on the TR and fording just below Hunts Creek where the River braids. This offers a quicker and more direct line.

Travel on the TL is up a series of grassy flats to Dunns Creek, then boulderhopping up Dunns, mostly on its TL, crossing where necessary. The start of the track around the Dunns gorge is on the TL where the Creek starts getting steep and bouldery (around E1472576/ N5256503 (BV20 726 565)). It continues parallel to the Creek for 40 metres then veers West up an open slip with dead-standing trees. The track re-enters the bush 500m up the slip on the TR, just behind a large boulder with a cairn on top. It climbs steeply up through hardwood forest onto the ridge on the TL of the gorge and follows this up a short distance before sidling off into Dunns basin. The track is roughly level from here to the Hut which is tucked against the bush a couple of hundred metres upriver from where the track emerges into the clearing. The track around Dunns gorge was last trimmed in 2015 and is still OK to follow. Allow 2.5 - 3 hours from Dillon Hut to Dunns Hut.

The DOC maintained route to Dunns Hut from Mid Taipo Hut starts at the bottom end of the river flat below Hura Creek. A track enters the bush here, climbs up a gut, and over a low bush saddle into Dunns basin. The saddle section is an easy amble through beautiful montane forest, followed by a gentle drop into Dunns basin. This track was recut in 2021. Travel time to Dunns from Mid Taipo Hut is around two hours

Type
Dunns is a NZFS S81, four-bunk design built in the 1960's. An open fire was removed quite early on and replaced with a wood burner. The Hut was lined and had a roof-fed water tank and toilet added. At some point one of the cupboards next to the door was removed to create more space. There is a long drop toilet next to the Hut.

Condition
Dunns was repainted, resealed, had some piles, framing, the skylights, and flue replaced in the summer of 2004. Some repairs to the door and frame were made in 2013. DOC track cutters cleared the Hut site, fixed the tap on the water tank, and did some rodent control in 2015. The Hut's woodburner only has a single flue (no outer sleeve) which has melted the seal on the rubber boot on the roof. There is an open gap there through which the rain pours. The hut floor slopes and water pools along the base of the eastern wall. The constant damp is starting to rot the bottom plate and the bearer and joist ends below it. There is very little clearance under the Hut and the whole sub-floor is damp. Water also gets in around the door stud on the hinge side and around the windows and so there are likely to be frame issues not visible behind the internal lining. The toilet has some dry rot in one of its dwangs.

Routes
The route over Newton Saddle to Newton Creek Hut goes up Dunns Creek. The tracked sections below the bushline were recut by DOC in 2021. The route above the bushline on both sides of the Saddle is poled. Those with experience in the remote huts zone should allow 4-5 hours for the crossing in good conditions. Big variations in track times for the crossing are noted in the Dunns and Newton Creek hutbooks reflecting a wide range in fitness and experience of those doing it. Snow may slow things considerably in the colder months and the top of the Newton Creek side of the Saddle may require ice axes at certain times. The creek that provides access down into Newton Creek basin gets no sun in the winter and the rocks are often extremely icy.

A traverse of Mt. Eidelweiss from Dunns Saddle to Newton Saddle makes for an interesting side, or day-trip, in good conditions. Travel up the TL branch of Dunns Creek to Dunns Saddle is relatively easy, although there is potential avalanche danger from Tara Tama after heavy snowfalls. The section of tops over Mt. Eidelweiss to Newton Saddle is fairly gentle. and it is possible to access Newton Creek basin from Dunns Saddle down a steep scree and rock gut. Travel down Newton Creek from the upper basin to the Hut is OK, although a bush-bash is required on the TR of a bouldery section a short distance above the Hut. The forest isn't too bad if you pick the right line. More time and higher skill levels are required for the Dunns Saddle route.

A high-level traverse can be done from Dunns Hut to Scottys Biv over Tara Tama. Access is up an open gut 20 minutes up Dunns Creek, around E1471066/ N5256463 (BV20 711 565). The gut turns into an active avalanche chute after heavy snowfalls and discernment is needed when using it during the colder months. It provides rapid access up onto a broad tussock spur with spectacular rock outcrops, and from here it's a straightforward rock scramble up to the summit of Tara Tama. The traverse to Scottys Saddle along the crest of the Range is straightforward and it is 20 minutes descent down reasonably gentle tussock faces to the Biv which is visible for most of the traverse.

It is also possible to drop directly down to the Biv from the ridge between the high and low peaks of Tara Tama. Descend via some steepish rock guts and screes into the open creek bed further down. A waterfall near the bottom of the creek can be negotiated on the TL, after which there is a short uphill scrub-bash from Scottys Creek onto the bench where the Biv is located.

Scottys can be accessed from Dunns Saddle by heading North over a couple of small knobs to a dip just before where the ridge becomes vertical. It is necessary to sidle off the main ridge here on the Newton Creek side, across and up a scree to a dip on the western ridge of Tara Tama just below point 1751m. Continue down from here to the crest of the Tara Tama Range and along to Scottys Saddle. Ice axes and crampons may be necessary for the traverses in winter and spring.

Griffin Creek Hut has historically been accessed from Dunns using the Scottys route by dropping from the unnamed saddle 200m South of Scottys Saddle, which has a large boulder with a cairn on top of it. A steep scree leads into the unnamed creek below, and this is followed down into the Griffin. A waterfall in the alpine scrub zone can be skirted on the TR. At around the 1000m contour there is another set of waterfalls which up until recently could be downclimbed. Changes to the streambed have mad this impossible leaving the choice of using a rope or climbing out of the creek on the TL onto a steep side-ridge with very thick alpine scrub and dropping down this. Further down the creek flattens somewhat and the going gets easier. The Rocky Creek track crosses the creek about 400m above its confluence with the Griffin. Follow this down the TL to where it connects with the main valley track 20m above Griffin Creek. From here it is around 15 minutes upriver to the Hut.

Repairs proposed
The planned rebuild will involve stripping the Hut down to the floor, strengthening the sub-floor, replacing any dozy piles, then flying in a new pre-built frame. This will be re-cladded, double glazed windows will be installed, and the roof and ridging replaced. The woodburner will have an outer flue casing added to prevent the current situation happening again. The rotten stud in the toilet also needs replacing.

Provisions on Site
Two shovels (one has a broken handle), an axe, an aluminium basin, a battered billy, a bow saw, a broom, a stainless steel bucket, a spare louvre pane, two metal stools carried in by some appreciative Dutch visitors, and the ubiquitous DOC hearth brush and shovel.
Powered by