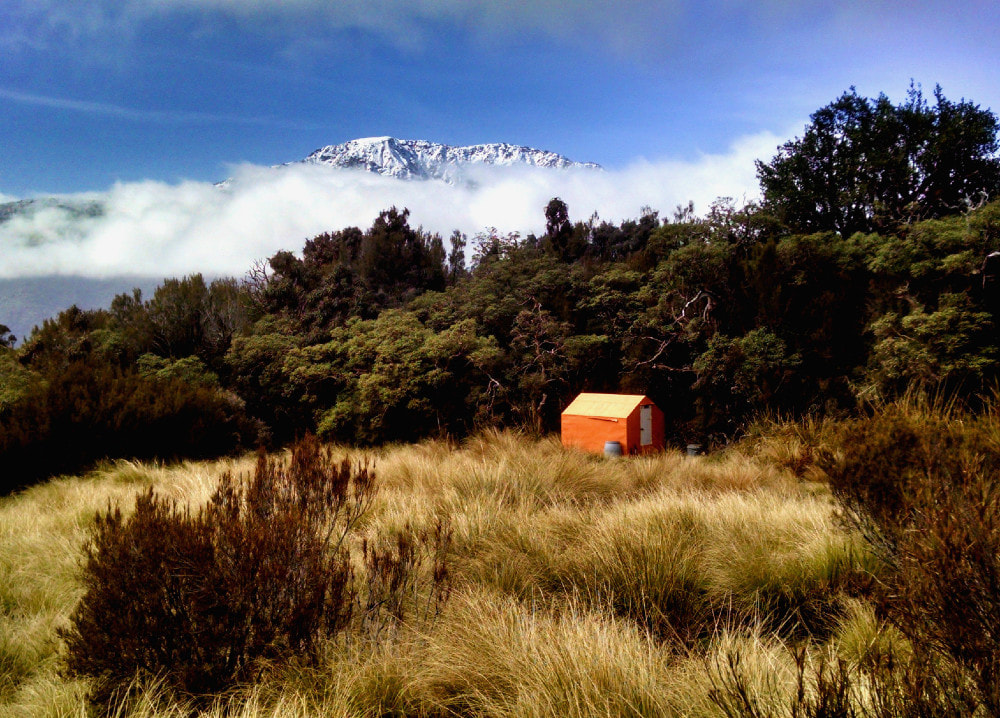 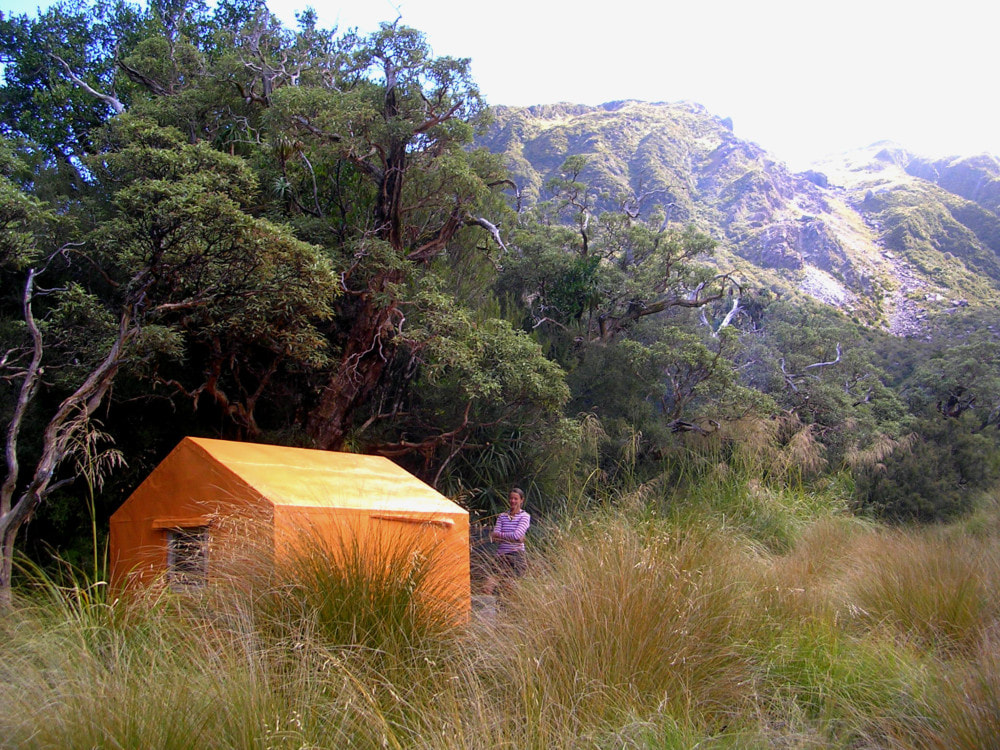 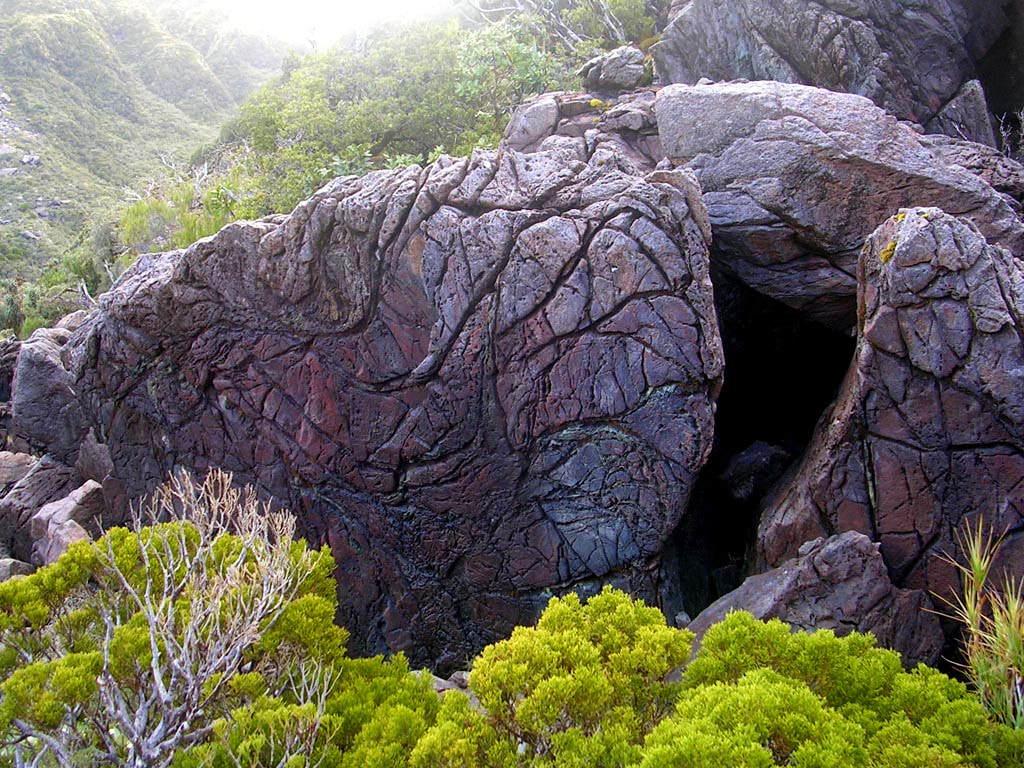 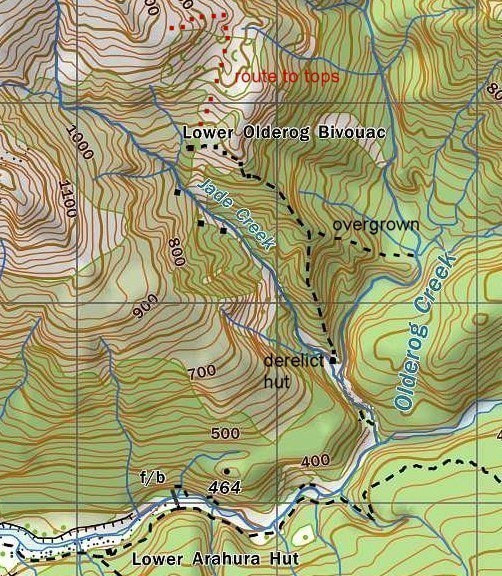 Maintenance Status
Lower Olderog Biv was designated for removal in DOC's 2004 High-Country Review, despite being in surprisingly sound condition after 30 years of zero maintenance. It was being visited once every 3-5 years at the time, hardly surprising given the overgrown state of the access track and lack of publicly available route information. The Biv is located in the Waitaiki Historical Reserve which is overseen by Mawhera Incorporation. In March 2014 Joke De Rijke, Geoff Spearpoint and I went in and painted and sealed the Biv and did some floor repairs. DOC provided the paint and a helicopter backload of materials. I continue to keep an eye on the route up from Lower Arahura which is in reasonably good shape. The Biv is getting 5-10 visits a year currently.

Location
Arahura catchment. Grid Ref: E1461562/ N5255773 (BV19 616 558). Map BV19. Altitude 865m. Lower Olderog Biv is located at the edge of a tussock clearing in the sub-alpine zone above the TL of Jade Creek. Jade Creek is a key pounamu extraction area and there are two private huts that were used mostly in the 1960's and 70's way down in the Creek below the Biv. The bottom one is derelict and the top one unused but still weathertight. The Biv site is close to the bottom end of an ultramafic rock band and this provides relatively easy and open access onto the Olderog tops. There is a good sized rock biv in the sub-alpine scrub about 100m from the Biv that would sleep four quite comfortably. It was used by deer cullers before the Biv was built. Lower Olderog Biv can be accessed in 6-7 hours from the Arahura roadend by a reasonably fit party, or by way of a longer and more demanding traverse of Mt. Kerr, and the McArthur Crags from the Big Wainihinihi valley.

Access
Access to Lower Olderog from the Arahura valley starts at the swingbridge 15 minutes upriver from Lower Arahura Hut. Cross the bridge and continue up the TR of the Arahura for around an hour to Olderog Creek. This section mostly boulder travel with short sections of track around some small bluffs. Being the shady side of the valley, the rocks are wet and slippery for most of the colder months. Continue up the TR of Olderog Creek, a mix of track and boulder travel, to the the Jade Creek confluence. There is a fresh slip on this section that needs a bit of care to traverse followed by a couple of large slippery logs to negotiate where the creek cuts into a bluff. From the confluence head up Jade Creek for 100m or so and exit on the TL at the site of the derelict Jade Creek Hut.

The track to the Biv starts at the door of the Hut and goes up the ridge separating the Olderog and Jade catchments. The climb is steep in places and leads up to an open rocky ultramafic area in the sub-alpine zone. Cairns lead off the ridge in a NW direction around the 900m contour and sidle across an open scree to to a short section of track that drops down through a band of pink pine, and manuka to the tussock bench where the Biv is located. The Biv is hidden from view by the scrub until you are about 100m from it. The track up to the Biv is in good condition and was last checked in March 2022.

Type
Lower Olderog is one of three remaining first batch, B49 bivs built by the NZFS in 1957. That it remained in good condition for over 30 years with no maintenance is a tribute to the simple wrap-around iron cladding design. It has a perspex window at the far end and two sleeping benches that were probably retrofitted in the early 1970's. There are no mattresses. Water is from a small creek about 5 minutes away and is accessed down a track at the top end of the clearing. A small roof-fed water barrel was placed next to the Biv in 2014. There is no toilet. 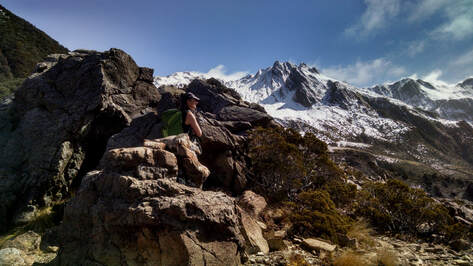 The Olderog Range from the ultramafic band above the Biv - Photo Andrew Buglass
Condition
Lower Olderog is currently weatherproof and in generally good shape. The 2104 working bee saw it painted rescue orange. A hole in the floor next to the door was repaired, the bottom plate replaced, and the door stud re-secured. A partially rotting bearer under the door was braced along its length with a 4x2. A purlin in the roof was replaced and two of the rafters braced for extra support. A flashing was constructed for the window, and a new latch put on. Any nails in the roof cladding that were lifting were replaced with tech screws. The door hinges have been replaced. A couple of the piles are on a bit of a lean, and the SE corner has dropped a bit. The floor remains sound however. The bottom section of the middle pile is eaten out, however it still feels pretty solid. The SE corner stud is starting to look a bit dozy from dry rot and a damp patch has appeared on the floor in the SW corner.

Routes
The tops traverse to Lower Olderog over Mt. Kerr and the McArthur Crags starts from the Hydro Road in the Big Wainihinihi River which is accessed via the Milltown Road in the Arahura Valley. There are two locked gates starting at about 3km along the road. To cycle the locked portions (7.5km) takes around 35 minutes. Another option for those coming from Christchurch is to turn off before Kumara onto the old West Coast Road and drive to Dillmanstown. From here it 9.5km (around 45 minutes) cycling along the new West Coast Cycleway to the start of the track.

The track up Mt. Kerr starts at the unnamed creek on the big bend on the Hydro Road (E1461160/ N5260130 (BV19 612 601)). Its entrance is on the TL of the creek, just up a bit from the iron grill that feeds the water race that runs beside the road. It climbs steeply up onto the ridge on the TL of the creek and follows it all the way to the tussock. At the tussock line the trail veers SW up through a band of patchy scrub to the trig at point 1278m. From the west ridge of Mt. Kerr is followed up, initially through scattered low scrub, then a much steeper tussock section to the summit. The track was trimmed and re-marked in 2018.

Follow the crest of the Range from Mt. Kerr to the McArthur Crags and drop down the SE spur from here towards the Olderog catchment. The spur has several sharp points which can be skirted on their southern sides. Climb up onto the last point and drop from it onto a flat area with three tarns. A stake with permolat at the northern edge of the bench (E1461531/ N5256404 (BV19 615 564)) indicates the drop-off point down a scrubby face to a second bench with cairns. Drop from the eastern end of this and follow a cut and marked trail across a scrubby gully to a saddle (E1461720/ N5256230 (BV19 617 562)) between a prominent ultramafic rock outcrop and the main hillside. Follow the cairns in a SW direction down a jumbled rocky gut towards the Biv clearing. The Biv itself is visible in fine conditions from the top of the ultramafic band. A fit party should be able to reach Lower Olderog Biv in 6-8 hours from the start of the Mt. Kerr track in good conditions. Add an extra hour if the gates are locked and you are walking the Hydro Road.

The McArthur Range has numerous good campsites and is relatively easy travel all the way around to Top Olderog Biv The section from Mt. Kerr to Top Olderog is reasonably straightforward, with numerous little ups and downs. There are only couple of very small tarns on the route which are easily missed, so it would pay to carry some water. Top Olderog Biv is sited around a 100 vertical metres below the crest of the Range, and visible from here in fine weather. Access is down a tussock gully marked with a cairn at the top, just West of the Biv, or directly down the faces above the Biv. Be sure to sidle East out of the gully at 1250m - it's a long way down into the Olderog. Allow 4-6 hours from Biv to Biv.

It is reportedly possible to access Top Olderog Biv from Lower Olderog via Olderog Creek, but this takes longer than the tops route, and is probably not of interest to most. It is a steep drop from the ultramafic bench into the Creek, a couple of small gorges to negotiate in the Creek, then the climb from the creekbed up to Top Olderog Biv. I attempted this route in 2006, but couldn't find a good route down from the bench into the Creek. It's probably easier coming the other way.

In the NZFS days there were tracks up both sides of the Arahura. The one on the TR followed a side-creek of the Olderog called The Trench, which runs above, and parallel to, the main valley. At around 675m an old NZFS track branches off the Lower Olderog Biv track and drops down into the mid section of Olderog Creek. This was part of an old NZFZ trackline that went along The Trench to Newton Creek, but hasn't been maintained for 50 years. The Trench itself is relatively easy creek travel, but the tracked sections down into Olderog Creek and from the head of The Trench to Newton Creek have vanished, and it's a real grovel. Interest has been expressed by a few Permolatters about reopening The Trench and creating a link between Lower Olderog Biv and Newton Creek Hut. It'd be a fairly major project, but we'll see.

Repairs still needed
Some of the remaining flathead nails holding the iron roof and wall cladding may lift over time and can be replaced with the small screw-in bolts on site. There is an 8mm ring spanner for screwing them in. That corner stud and a couple of piles could do with replacing at some point.

Provisions on site
Two plastic buckets, an aluminum bucket, an aluminum wash basin, a camp oven, two billies, a pot, two small frypans, a small sledgehammer, a shovel, a hammer, a tenon saw, a small phillips screwdriver, a small hacksaw, a hand broom, two paint brushes, 3 litres of grey enamel metal primer, 2 litres of white acrylic, 1 litre of rescue orange acrylic, assorted nails and screws, and a sealant gun. Underneath the Biv are some old lengths of tongue and groove, an old perspex window and frame, a few 6x1's, a 4x2, some black polythene, and a small sheet of iron cladding.
Powered by