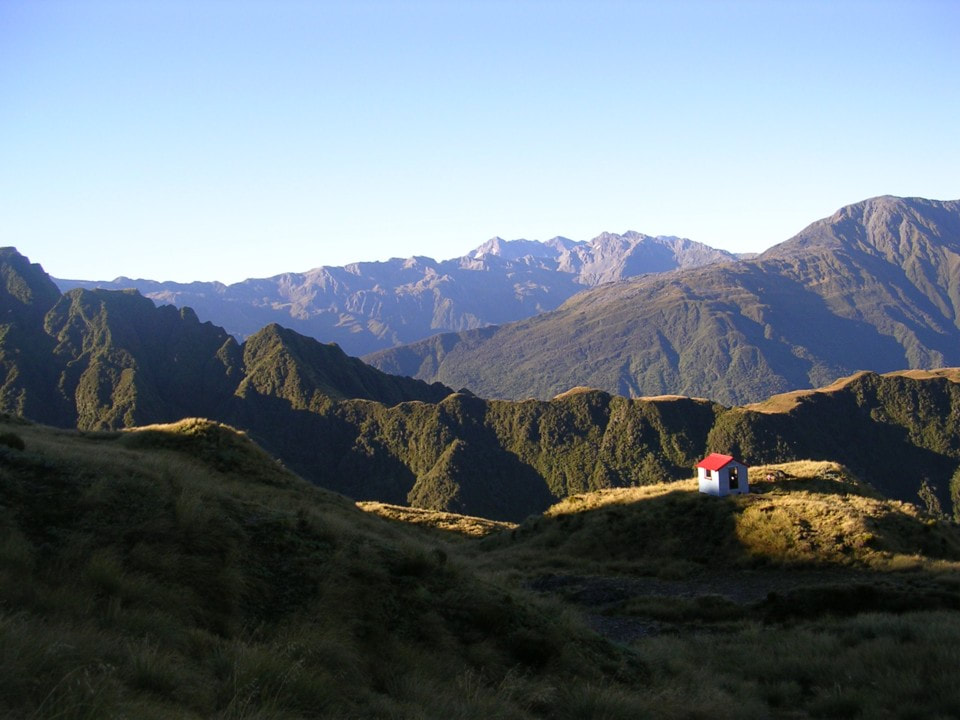 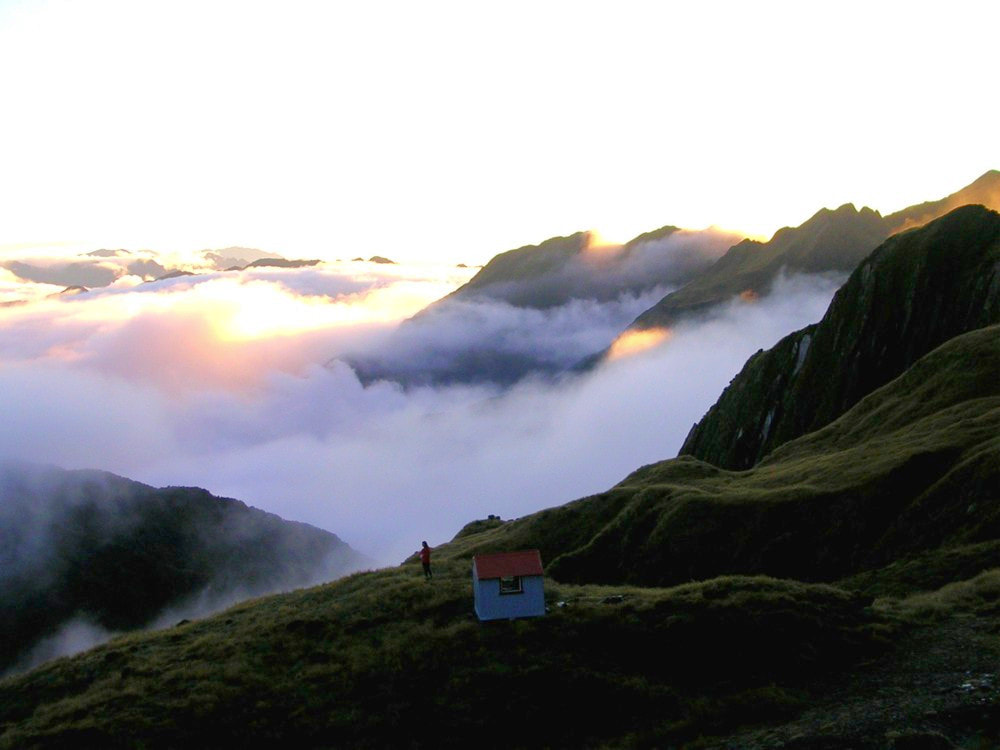 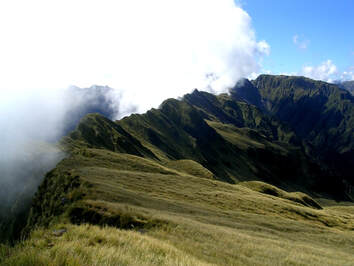 Looking along the Olderog tops to Mt. Olsen from Mt. Kerr: Photo Andrew Buglass 2008
Maintenance Status
Top Olderog is designated as minimal maintenance. An access track onto Mt. Kerr and the Olderog tops from the Wainihinihi Hydro Road is not officially maintained, but has been kept open by Permolat volunteers.

Location
Arahura catchment. Map BV19. Grid Ref: E1464308/ N5257604 (BV19 643 576). Altitude 1250m. Top Olderog Biv is located a very remote setting, high on a tussock bench above the TR of Olderog Creek. Prior to being profiled on this site the Biv was getting one visit every 3-5 years. The rate has increased to about 3-7 visits per year since then, making it unlikely that you would encounter anyone if you were heading up there. On my first visit there in 2004 I found the remnants of an old NZFS food drop in the storage drum. There was some petrified butter wrapped in 1973 editions of the Hokitika Guardian and a packet Red Rose tea that had turned powdery over the decades. It didn't make a particularly satisfying brew, but then Red Rose was never that great, even when fresh. The views from Top Olderog are stunning, the sunsets beautiful, and the stillness and sense of isolation palpable. A number of reasonably challenging tops routes are possible from the Biv to other remote huts in the area.

The track up onto Mt. Kerr starts at the unnamed creek on the big bend on the Hydro Road (E1461160/ N5260130 (BV19 612 601)). Its entrance is on the TL of the creek, just up a bit from the iron grill that feeds the water race. The track climbs steeply up onto the ridge on the TL of the creek and follows it all the way to the tussock. It crosses a patch of bare gravel at the top of a slip around 1000m, re-enters the scrub, then at the tussock line veers SW up through a band of patchy scrub to the trig at point 1278m. From here it is a relatively straightforward climb through some scattered scrub, then up a steep tussock ridge onto Mt. Kerr. The track was trimmed and re-marked in 2018.

The crest of Olderog Range is followed from Mt. Kerr until directly above the Biv. There are numerous small ups and downs on this section, but the going is generally pretty easy. The Biv is sited around a 100 vertical metres down the Olderog side, is visible from the top in clear conditions, but easy to overshoot when claggy. There is a bench with a couple of small tarns just before the drop-off. Allow 6-8 hours travel from the Road to the Biv or 7-9 if you have to walk from the locked gate.

Type
Top Olderog Biv was the first new generation B142 high-stud design, built in 1971 by Tony Newton and Mario Geremia of the NZFS in Hokitika. It has two sleeping platforms with mattresses, and a louvre window on each side. It is lined, cosy, and very light inside with the two sets of windows. Louvres may not be the best option for high altitude weather however, and the South window blew out in the late 1990's or early 2000's, leaving the Biv open to the elements for a number of years. Two small tarns next to the Biv provide water. There is no toilet.

Condition
Top Olderog Biv is still in reasonably good condition (last report April 2020). The Biv was by DOC repainted in 2008, and some buckled interior wall lining and the door were replaced, new louvres fitted in the South window, and tie-downs tightened. In 2014 Eigill Wahlberg re-fastened a section of flat-iron on the SW corner that was lifting and letting in moisture. The flathead nails weren't holding it and needed replacing with screws. The paint on some of the wall cladding, the southern window frame, door frame, and roof is flaking. The door sticks and needs easing. Some Greymouth SAR guys are now looking at Maintenance of Top Olderog as a possible project.

Routes
Lower Olderog Biv can be accessed by climbing onto the the crest of the Olderog Range and following it along to the McArthur Crags. Drop down the SE spur of the Crags skirting several pointy bits lower down on their southern sides. Climb back to the top of the last point and drop from it onto a flat area with three tarns overlooking the northern end of the ultramafic bench. A stake with permolat at the northern edge of the bench (E1461531/ N5256404) indicates the drop-off point down a scrubby gully to a second bench with cairns. Drop from the eastern end of this and follow a cut and marked trail across a scrubby gully to a saddle (E1461720/ N5256230) between a prominent ultramafic rock outcrop and the main hillside. Follow the cairns in a SW direction down a jumbled rocky gut towards the Biv clearing. The Biv itself is visible in fine conditions from the top of the ultramafic band. Allow 4-6 hours in good conditions for the journey from Biv to Biv.

Although it appears benign from a distance, the section of the Olderog Range from Top Olderog Biv to Mt. Olson is not recommended as a route. There are a number of vertical pitches and one very exposed sidle with minimal hand-holds. The first of two alternatives for accessing the Tara Tama Range and Newton Creek basin from the Biv involves dropping down into the head of Olderog Creek. Access is down the second side-creek upriver of the Biv and this is reached by sidling across the tussock faces along the 1250m contour. Once down in the Olderog the travel is OK with the odd bit of of a scramble to get around some small cascades. Further up the Creek opens out and becomes quite idyllic and picturesque, as well as easy travel. A steep gut in the head of the Creek leads up to the low point between Mt. Olsen and point 1566m.

Travel North or South along the crest of the Range is problem-free from here. Access into Newton Creek basin from Mt. Olson can be gained down an open rock gut that enters Newton Creek around the 820m contour. A band of bluffs above the gut needs to be negotiated and care is required in picking a safe line down through them. Travel down Newton Creek is reasonably straightforward, although frequent crossings and the odd detour through the scrub is required. A rough section with large boulders not far upstream from Newton Creek Hut can be skirted by sidling through the montane forest on the TR where the travel isn't too bad. Allow 5-6 hours for the journey from Top Olderog Biv to Newton Hut.

The other option is to drop into the upper Wainihinihi Basin from the crest of the Olderog Range down the first unnamed side creek downriver from Magnesite Creek. The drop-off is at a small saddle at E1463926/ N5257969 (BV19 639 580) and the steep gut below it leads down into the creek. The creek swings North lower down, passing through a band of alpine scrub which is less thick on the TL. Once in the Wainihinihi It is easy travel up the river flats with plenty of good campsites to where the valley closes in. The River passes through a small canyon here and it is necessary to exit up a side-creek that comes in on the TL at E1465523/ N5258487 (BV19 655 585). The creek bed goes up a series of smooth rock chutes for a couple of hundred metres after which it opens out.
Climb out of the creek onto the tussock terrace on the TR of the canyon and head NE, over a small side-creek, onto the prominent ridge that connects with the Tara Tama Range just SW of point 1572m.

Scottys Biv can be accessed by traversing the Tara Tama Range around the head of Newton Creek basin and down to Scottys Saddle. A 20 minute amble down a series of sloping benches and tussock faces from a point just NE of the Saddle will get you down to the Biv, which has a high-viz red roof.

Griffin Creek Hut is accessed from the unnamed saddle 200m South of Scottys Saddle. A cairn on top of a large boulder marks the drop-off down an old scree into the creek catchment below, which is dry in its uppermost portion. Further down there is a waterfall that has short section of track through the alpine scrub on its TR. A steep section with large boulders and small cataracts follows and requires a reasonable amount of agility and dexterity to negotiate. Further down the creek flattens and the going becomes easier. The Rocky Saddle track crosses the creek 400m above its confluence with the Giffin and intersects with the Griffin Creek track further down. Follow the main valley track upriver across the montane terraces for around 15 minutes to the Hut. Allow a full day and good conditons for the Griffin and Scottys routes. 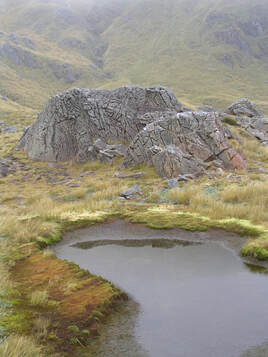 Tarn and ultramafic outcrop in Cold Creek headwaters: Andrew Buglass 2012
Griffin Creek Hut can also be accessed from Top Olderog via the upper Wainihinihi and the Griffin Range. Cold Creek provides a reasonable route up out of the Wainihinihi basin. The lower section of the Creek has a series of slippery little cataracts, which can either be scrambled up, or skirted through the scrub on the TR. Further up the Creek forks and either branch will get you onto the tops. There are some benches with small tarns and picturesque ultramafic rock outcrops on the TR of the TR fork. The remnants of the pre-WWI serpentine mine and cableway are still visible part way along the Griffin Range. There is also an awesome vertical drop-off on the Wainihinihi side of the ridge between Mt. Griffin and Wilson Knob. The track down through the alpine scrub to the Griffin Creek turn-off starts a couple of hundred metres NE of point 1126m at GPS Ref: E1467135/ N5261729. The track was recut by Permolat volunteers in January 2021. Allow a full day and good conditions for the Olderog - Griffin crossing.

It is possible to get from Top Olderog to Lower Olderog Biv down Olderog Creek itself, although it's certainly longer, and probably more difficult. There are two gorges to get through before exiting the Creek at the base of the ultramafic rock zone. A rock and scrub scramble is necessary to gain acess from here to the bench above Lower Olderog Biv. Allow seven hours for this route, in contrast to the tops traverse which takes 4-5. I attempted to to use this route to get from Lower Olderog to Top Olderog, a few years back but couldn't see a decent route down from the top of the ultramafic bench. It's probably easier to locate a good line when coming up from below.

Repairs needed
The door needs easing (planing) and the handle on the louvre window needs fixing. The inside and outside window sills and door require scraping back and painting.

Provisions on site
One billy, one small collapsible shovel, an aluminium bucket, a hand brush and shovel, a spare louvre pane, and a small quantity of small flathead nails and permolat. There is an old door, a makeshift ladder, a few bits of tongue and groove and 4x2, and a coil of No. 8 wire under the Biv. Eigill left a hammer, a screwdriver, some rasps, and plenty of 50mm screws in the Biv in 2014. The screws ans screwdriver will come in handy if more nails holding the iron cladding start lifting.
Powered by