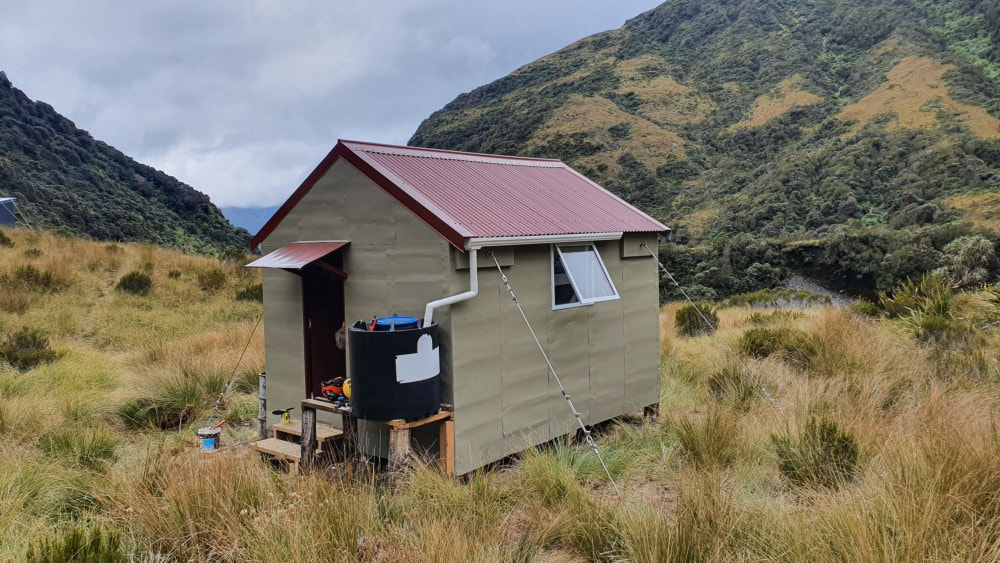 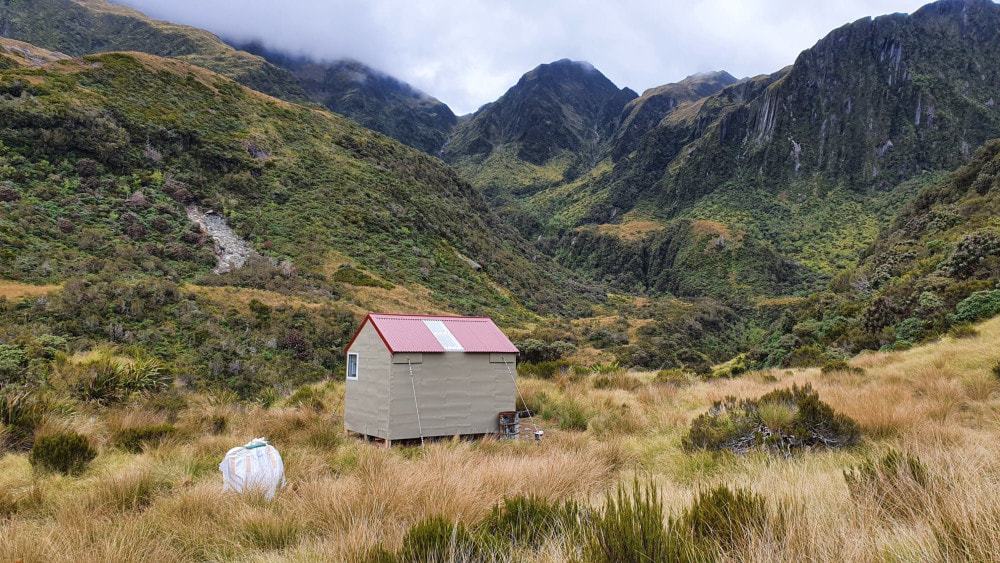 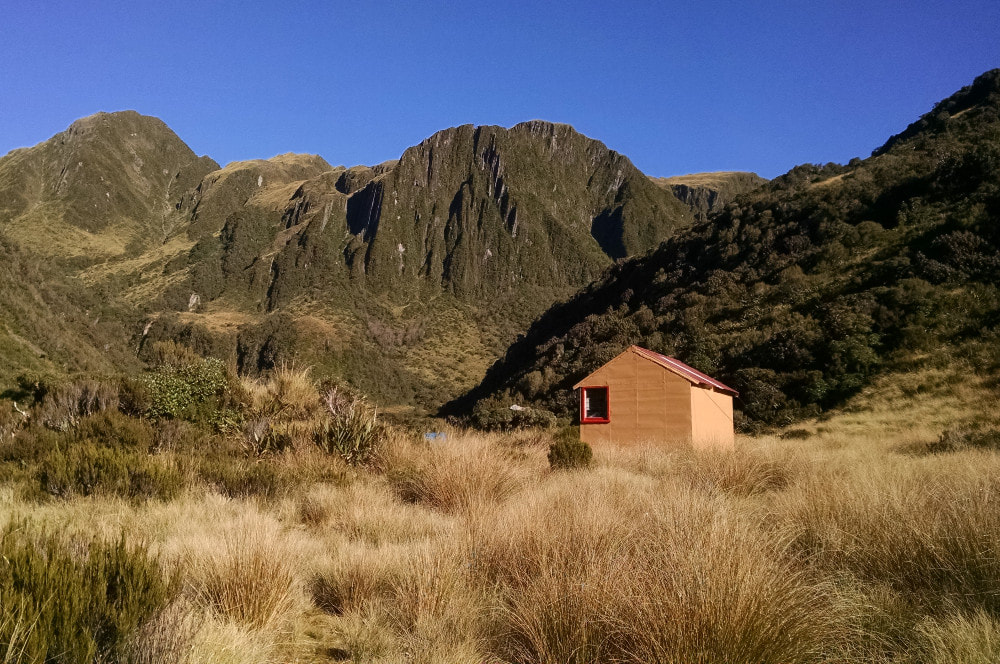 Maintenance Status
Scamper Torrent was designated as fully maintain by DOC in their 2004 Review, however following this little of significance in the way of repairs took place. When the access track was officially dropped from DOC's maintenance schedule in 2013 Permolat and others had already been maintaining it for quite a while. In 2021 funding became available for DOC to go in and do some comprehensive maintenance and install a much needed toilet. DOC also obtained some Kaimahi for Nature funds and plan to fly in a Hiking NZ crew shortly to do some work on the access track.

Location
Waitaha catchment. Map BW17. Grid Ref: E1416048/ N5219619 (BW17 161 197). Altitude 975m. Scamper Torrent Hut is located in the Waitaha valley in the upper basin of Scamper Torrent. It's a picturesque and remote setting that can be accessed reasonably easily in a day from the Waitaha roadend by a reasonably fit party. Scamper Torrent tumbles from the basin in a series of waterfalls down into Whirling Water, one of the Waitaha's larger tributaries. The Hut has historically been low-use, although the frequency of visits increased a little following exposure in wilderness articles and on this website. It received 10 visits in 2019.

Access
The access track up to Scamper Torrent basin from Kiwi Flat Hut has been reliant on volunteer input for some years now. In 2021 the BCT got hold of some Jobs For Nature funding to get a Hiking NZ crew in to do some maintenance, however this never eventuated. The track starts 75m up the TR of Labyrinth Creek at the bottom of Kiwi Flat. It climbs steeply out of the creekbed, then flattens and ascends a sloping bush terrace towards the toe of the hill where it connects with a narrow steep spur. From here the gradient doesn't relent much until Point 1125m where the spur connects with the broad ridge bounding the TL of Scamper Torrent basin. There's a waratah just above a tarn on the basin side and another quite a distance further down. We dropped another five waratahs at the tarn in October 2021 and these have yet to be placed down to the top edge of a band of alpine scrub, from where a track leads to the floor of the basin. It is a 10 minute walk from here upriver to the Hut, which is located on the terrace on the TL of the Torrent. Allow 2.5-3 hours from Kiwi Flat Hut to Scamper Torrent Hut, or 6-8 hours from the Waitaha roadend.

Type
Scamper Torrent was the last of the NZFS S81 four-bunk huts and was built in 1971 at a cost of around $1600. It is lined and originally had a kerosine heater which is no longer there. A small roof-fed water tank was installed in 2001.

Condition
Scamper Torrent was well built and still in good shape in 2001 after forty years of zero maintenance when a DOC volunteer party   went in and repainted it and installed the water tank. The work was financed by an unknown donor who was concerned about the state of the Hut. In 2014 Martin Clapham fitted a new tap on the water tank and repaired a broken downpipe with cord and tape. Emma Richardson gave the roof a coat of paint in early 2019. The DOC overhaul in 2021 involved re-roofing, painting and weatherproofing the Hut, replacing the louvre windows with double glazed ones, replacing the tie-downs, and installing a toilet. The Hut should be in tip-top condition for years to come.

Routes
A good tops crossing is possible to Scamper Torrent over Karnbach and Mt. Ashmore from the Wanganui valley. An old NZFS track, recut in 2017 and trimmed again in 2020, provides access from the head of Tarpot Creek onto the tops. Head up the Amethyst Hydro access road for 400m to where it crosses Tarpot Creek. Follow the Creek up taking the TR branch at each of two forks. The track exits on the TR the Creek where it begins to peter out at 460m (GPS Ref: E1408960/ N5219079 - BW17 089 191). It climbs steeply up a bush face onto a steep side-ridge that connects with Karnbach at point 1069m. A waratah with permolat marks the top entrance of the track at GPS Ref: E1409621/ N5218930 (BW17 096 189).

Continue up Karnbach through a narrow belt of alpine scrub with open patches up onto the sloping tussock benches on the Amethyst Ravine side of the ridge. Sidle under Mt. Ashmore and reconnect with the main ridge where it drops down to point 1199m. Climb from here up and around point 1411m to point 1502m. Drop from here down the the broad spur on the TL of Scamper Torrent basin to point 1125m where the access track from Kiwi Flat crosses over. Access to the basin can be gained from a number of points further up the spur but it is hit and miss from above due to bands of alpine scrub that are quite dense.

It is also possible to cross from the Wanganui using the Terra Quinn track that starts at the old dam site in the Amethyst Ravine. Terra Quinn has some reasonable sized tarns and good campsites, and leads onto Carls Ridge. Some Hari Hari locals retrimmed the track and did a bit of marking around 2014. I did a bit of cruise-taping and marking in September 2019. The track is good in places and reasonable in others. A few bits between Bryan Hill and Pt. 883m are vague and need permolatting. Carls Ridge connects with the Smyth Range at point 1684m and from here you can drop down the broad spur that bounds the TL of the main branch of Scamper Torrent. There are a few snow poles lower down on this route the Hut should be visible from point 1684m in clear conditions.

There is an unmaintained track that branches off the Terra Quinn track at the 730m mark and takes you down into the Amethyst basin. It should be possible to cross from the Amethyst headwaters over point 1502m into Scamper Torrent basin. Access down to the hut would be the same as for the Karnbach Route.

Access onto the Smyth Range from Scamper Torrent is up the broad spur on the TR of the basin directly opposite the Hut. There are two snow poles at the base of the spur that are visible from the Hut. There is a deep gut between the poles and it's easier to head straight up from the first pole following an animal trail through the scrub to the open tussock. Cross the gut further up around 1100m and continue up the spur to around 1300m, then sidle SE into the basin on the lee side of point 1397m. Continue on a SE diagonal up series of smooth rock ledges to rock gully running below the summit of Mt. Durward. This connects the crest of the Range just East of the summit. Travel along the Range is relatively easy for the next four kilometres, followed by a steep pitch up to point 2025m adjacent to the Kea Glacier. This is generally snow-free from late summer, but may require ice axes at other times, particularly when descending.

Headlong Spur is accessed by sidling from the 1920m contour across the Attic. The track up the Spur was last recut by the Hiking NZ crew in March 2021. The Spur track starts at the bottom end at the end of a terrace 30 minutes upriver from Kiwi Flat Hut. Allow three days for the Scamper to Kiwi circuit, with a night camping or bivying out on the Smyth Range.

Moonbeam Hut can be accessed from The Attic by dropping down into the TR fork of the first main side creek on the TL of Moonbeam Torrent. This is a very rough route with some obligatory scrub-bashing, and care needs to be taken. Moonbeam can also be accessed by continuing along the Range past Mts. Neville, Barry and dropping down Clearview Spur. There is one steep exposed section on the Spur between points 1945m and 1690m that requires down-climbing, but below this it is easy going. The Clearview Spur tops track was recut by Permolat in 2015, re-marked to 800m August 2016, and checked in February 2019. It is regrowing in some parts but is well marked. It drops down the narrow spur separating Dorothy Creek and Moonbeam Torrent and is accessed from a dry gut in the head of Dorothy Creek. A track exits the TL of the gut in the alpine scrub zone and sidles up onto the ridge. This is followed down to the Moonbeam Hut door.

County Hut can be accessed by dropping off Clearview Spur down the faces between Canary Creek and the next side creek down. A band of scrub near the bottom can be avoided by dropping into the Canary Creek for the last few hundred metres.

The upper Smyth River can be accessed from the saddle at point 1830m, NE of Mt. Barry (travel gets difficult further along the Range). Once in the upper Smyth it is good travel down to just below the Bradshaw Creek confluence, after which it becomes bouldery and rough. The swingbridge across the Wanganui River just above the Smyth confluence was washed away by a flash flood in 2013. The Smyth Range crossing is for experienced parties with alpine skills. It would be prudent to take a tent and break the trip from Scamper Torrent to Smyth Hut into two days.

It is possible, but not much fun, to drop off the Smyth Range from Mirage Knob. There are few remnants of an old NZFS tops track midway up the spur that leads from the Hunters Hut cableway, but it is non-existant in it's upper section and a difficult scrub-bash is required to get from the open tussock down to where the ridge is better defined. The track can be picked up here, but vanishes again on the bush faces nearer the bottom. The original track entrance is right behind the cableway on the TR of the Wanganui. This route is not recommended for uphill access. In addition, there is no water until the flat section of ridge just south of point 1533m is reached.

Provisions on Site
An old NZFS food drum, an aluminium wash basin, a large billy, a shovel, a slasher (with spare handle), a broom, a metal bucket, an NZFS First Aid Box (still reasonably well stocked with period items), assorted tins of paint including a large tin of Hut-coloured enamel, 1/2 a dozen medium sized u-bolts, a box of nails (assorted), a roll of permolat, an old oven that used to be attached to the kero cooker (no longer there), a flat file, 1/3 of a tube of sealant, a roll of denzo tape, sugar soap, and a spare louvre pane. Under the Hut there are a few odds and ends of timber, three home-made ladders, a large coil of wire rope, and two waratahs.