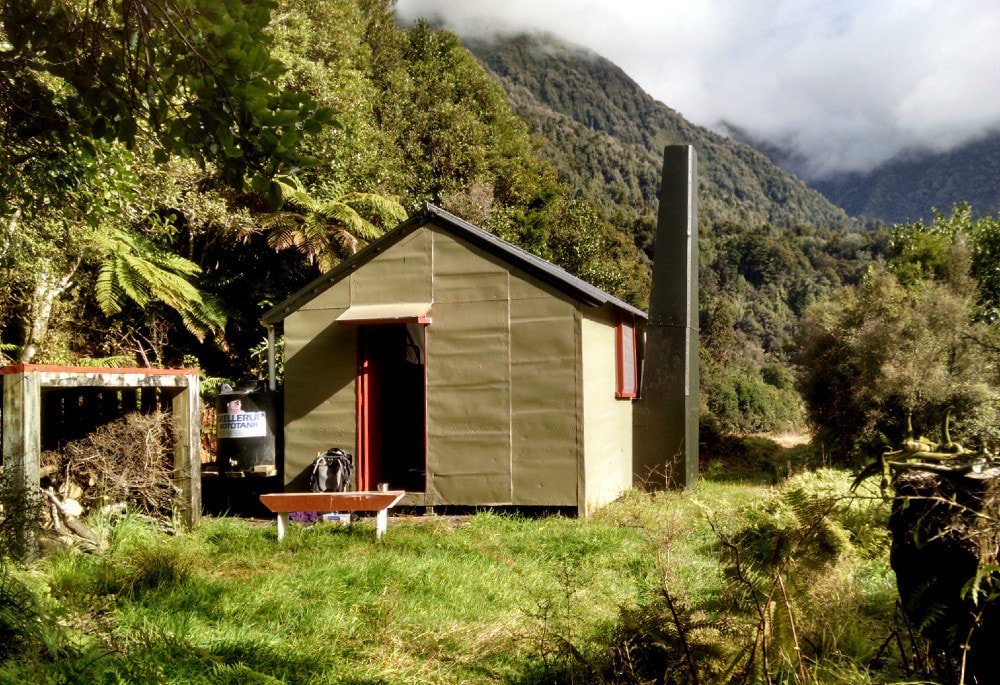 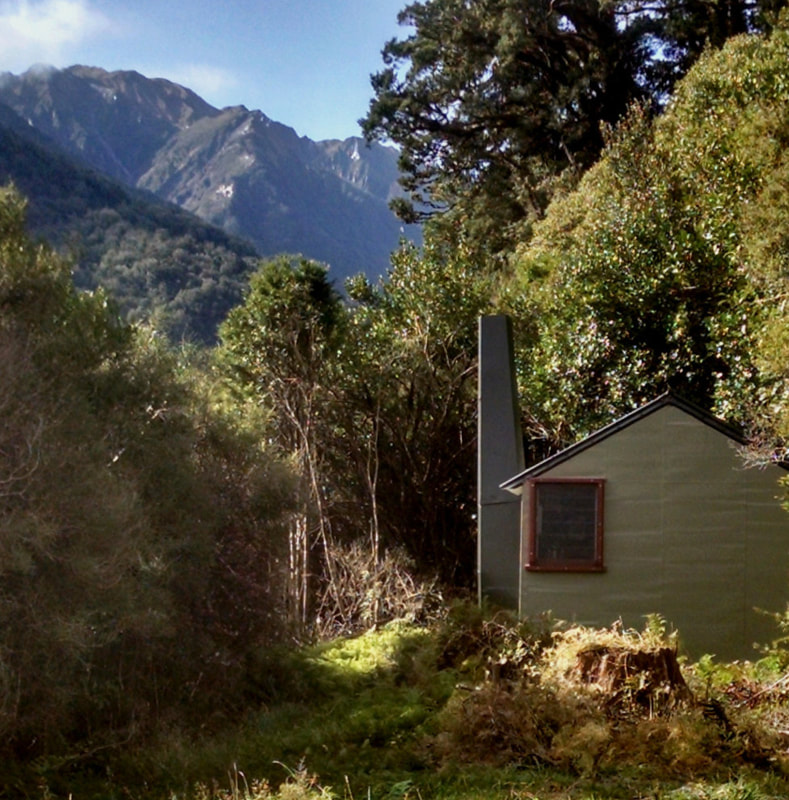 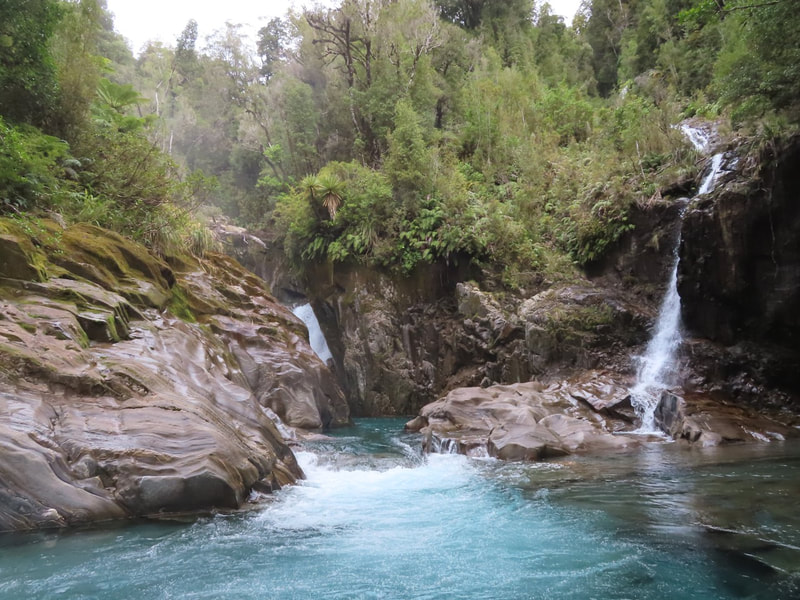 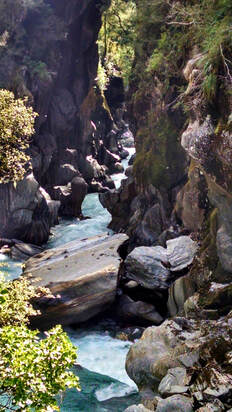 Morgan Gorge from the swingbridge - Photo Andrew Buglass
Maintenance Status
Kiwi Flat Hut and its access track from the roadend up the TR of the valley are fully maintained by DOC.

Location
Waitaha catchment. GPS: E1416735/ N5221676 (BW17 167 217). Map BW17. 265m altitude. Kiwi Flat Hut is located on the TR of Whirling Water, 400m upstream from its confluence with the Waitaha River and adjacent to the large river flat from which it derives its name. The bush surrounds are podocarp, rata, hardwood and the Hut is a pleasant and relatively easy overnighter, or first stop for those heading further up the Waitaha valley. The swingbridge at the bottom end of the Flat provides views into the top entrance of the spectacular Morgan Gorge which kayakers view as one of the most challenging stretches of white water in the country. An application for a run of the river hydro scheme at the top of the Gorge proposed by Westpower was declined some time back by the Minister for the environment. Although promoted as environmentally friendly, the proposed weir and tunnel system would have effectively removed three quarters of the Gorge's water, completely altering the character of this beautiful natural feature. Kiwi Flat doesn't get huge numbers of visitors however things have ramped up during Covid. This year there had already been 32 visits by April with increased numbers heading for Ivory Lake or the Smyth Range.

Access
There is a DOC maintained access track up the TR of the Waitaha that starts at a DOC car park at the end of the North Bank Road however the section up and around the Morgan Gorge is currently incorrectly marked on the NZ Topo 50 maps. From the car park a narrow strip between the farm fence and the River is followed to some low bluffs abutting Point 202m. The River is currently cutting in against the bluffs and a short detour track cut around them needs to be used. Once past Pt. 202m the route reconnects with the farm road which can be walked to Macgregor Creek. The first section of the farm road around the back of Point 202m is not currently open to public access.

After Macgregor Creek it is easy river travel for around a half hour to the start of a track which enters the bush at an unnamed side creek (E1415316/ N5242071). It follows the creek up a couple of hundred metres, exits, and climbs steeply onto a bush terrace (there is a ladder and chain at the top of this pitch). The track follows the terrace for a bit then climbs steeply up and over the shoulder of a spur before dropping onto a bench above the Morgan Gorge. The benches are poorly drained and boggy in a few places. The trail eventually drops down to the swingbridge at the top end of the Gorge and crosses to the TL at the bottom of Kiwi Flat. Head up the river bed past Labyrinth Creek to to a low bluff which has rough track cut over it. Ford Whirling Water, generally easy at normal flows, and head up its TR 200m to where a large orange triangle  marks the start of a short section of track to the Hut. Allow around three hours to get from the roadend to Kiwi Flat.

An older route up South bank of the Waitaha is still useable although is getting rough in a few places places. Andre and Corina Winkelman did some trimming and cruise-taping on it in December 2109. Permission from P.D. Farms is normally required for access from the end of the South Bank road, reportedly have stopped all access to trampers and hunters because of problems with people leaving gates open, and shooting cattle. An old farm track from one of the top paddocks leads to an old bulldozed cutting down to a flood channel on the Waitaha. Follow this upstream for a few hundred metres to where it joins the River just below Douglas Creek. Andre and Corina trimmed and marked down the cutting to the flood channel and the short section of bush terrace from the end of the flood channel To Douglas Creek. The boulderhop from Douglas Creek to Glamour Glen is straightforward in normal conditions. The entry to the old sidle track above the Morgan Gorge is well marked. A short distance along there are two large, recent slips about 100 metres apart that have wiped out the old track. Andre and Corina marked a route across and between these. Further along an older slip is crossed and this had been used to access a hot spring down in the gorge (approx. E1415214/ N5222445). The last bit of the climb down is very exposed and slippery, and I'd suggest taking a length of rope for this. The track continues sidling around the Gorge, eventually dropping back down to the River at the bottom end of Kiwi Flat. Allow 2-3 hours from the farm boundary to the Hut for this route.

Type
Kiwi Flat Hut is a standard NZFS S70 six-bunk design with open fire built in the 1960's. It was lined in the early 1980's and had one of the cupboards at the entrance removed to create more space. A water tank and woodshed were installed shortly after the DOC transition in 1987.

Condition
Kiwi Flat Hut is in excellent condition currently. The chimney was patched in a few places a few years back and the rest of the Hut had some major maintenance done by DOC in September 2019. It was re-piled, had the lead removed from the roof, and new fly screens, fire surround and ceiling sheet installed. The hut was painted, the toilet door and latches fixed, the water tank cleaned, and the helipad cleared. New mattress covers were provided.

Upper Valley Tracks and Other Routes
After DOC ceased maintaining the tracks in the upper Waitaha in the early 1990's., the Permolat Group took an interest in keeping it all open. Starting in 2007 we have have several track cutting forays into the valley, the last being in October 2021.

The track from Kiwi Flat to Moonbeam Hut Kiwi Flat sidles traverses some rough and undulating terrain but is currently in good condition. It starts at the Kiwi Flat Hut door and climbs steeply up onto a wedge of terrace that separates the Waitaha from Whirling Water. There is a half hour of relatively flat travel to the Headlong Spur turnoff after which the track drops off the terrace and begins a long sidle across the bush faces above the Waitaha Gorge. After about 20 minutes the track veers sharply uphill and climbs to 510 metres to get around two large active slips, before dropping back to the original trackline and continuing upvalley. There are a number of ups and downs before it starts descending to the River just upstream of Mark Creek.

From here it is around an hour's boulderhopping, with a couple of small bush detours to Moonbeam Hut. Moonbeam Torrent, a short distance downriver from the Hut, is large and swift and usually impassable after heavy rain. The track up to the Hut starts on the riverbed 10 minutes upstream from the Torrent, and climbs steeply 60 vertical metres onto the terrace on which the Hut is located. Allow 4-5 hours to get from Kiwi Flat to Moonbeam Hut.

The track from Kiwi Flat to Scamper Torrent Hut has been reliant on volunteer input for some years now. In 2021 the BCT got hold of some Jobs For Nature funding to get a Hiking NZ crew in to do some maintenance, however this never eventuated. A bit of work was done on the bottom terrace by some Permolat folk in October 2021. The rest is starting to get a bit overgrown here and there, buts is still OK to follow. The track starts 75m up the TR of Labyrinth Creek at the bottom of Kiwi Flat. It climbs steeply out of the creekbed, then flattens and ascends a sloping bush terrace towards the toe of the hill where it connects with a steep narrow spur. The gradient doesn't relent much until Point 1125m is reached on the broad ridge bounding the TL of Scamper Torrent basin. Waratahs lead from here down towards the basin and a short section of track through a band of alpine scrub that takes you to the river. It is a 10 minute walk from here upriver to the Hut which is located up on a terrace on the TL. Allow 2.5-3 hours for the journey from Kiwi Flat Hut to Scamper Torrent Hut.

The track up Headlong Spur starts 1/2 an hour up the main valley track from Kiwi Flat and provides access to the Smyth Range. This was recut by the Hiking NZ crew in March 2021. The Headlong Spur route forms part of a three-day alpine circuit encompassing Kiwi Flat, the Smyth Range, and Scamper Torrent. There is one steep section on the Smyth Range bordering the Kea Glacier which is generally snow-free from late summer, but would require ice axes at other times if conditions were icy. Most of the Range is relatively easy travel however, and there are plenty of good campsites. Scamper Torrent is accessed by dropping in a WNW direction down some sloping benches under Mt. Durward into the small basin on the lee side point 1397m. Follow the small stream from the basin to where it drops over a waterfall and continue sidling West across the tussock faces onto the broad spur bounding the TR of the main branch of Scamper Torrent. This spur has a small creek bisecting it. The high ground on either side of the creek can be followed through patchy scrub down into the main basin. The Hut is visible most of the way down from Durward in fine conditions.

County Hut can be accessed by means of a high traverse of Mts. Neville and Barry. There is a bit of permanent snow on these two peaks, and it is advisable to carry an ice axe at most times of the year. There is a steep, exposed section of Clearview Spur below point 1945m that requires downclimbing. The route from Clearview Spur into County Stream is down the faces on the TL of Canary Creek. Drop into Canary Creek for the last couple of hundred metres to avoid a band of alpine scrub just above the valley floor. A fit party may be able to get from Kiwi to County in a day over the tops, but it makes more sense to camp out and break the journey in two.

Smyth Hut in the Wanganui can be accessed by dropping off the Smyth Range at point 1830m. The upper Smyth River is good travel down to just below the Bradshaw Creek confluence. From here the going gets bouldery and rough. While this route could theoretically be done in a long day from Kiwi Hut by a fit party, it would be more sensible to allow two. The swingbridge across the Wanganui just above the Smyth confluence was washed away in a flash flood in 2013.

Repairs
Nil required currently. The Headlong Spur track would benefit from a bit more work on the smaller shrubs, flax and astelia trimmed between the 900m and 1000mcontours.

Provisions on Site
One camp oven minus lid, two billies, a pot, some small frypans, a broom, two aluminium buckets, plastic and aluminium wash basins, two axes, a slasher, a hammer, a reasonable amount of nails (various sizes) and staples, long tech screws, a small quantity of permolat, a pruning saw, a philips screwdriver, a sealant gun and two tubes of sealant, 2 paintbrushes, 2 paint rollers plus three sleeves and a tray. Under the hut there are three lengths of plastic downpipe, a length of spouting, and a roll of No. 8 wire, some spare piles, paint and a roll of clearlight.
Powered by