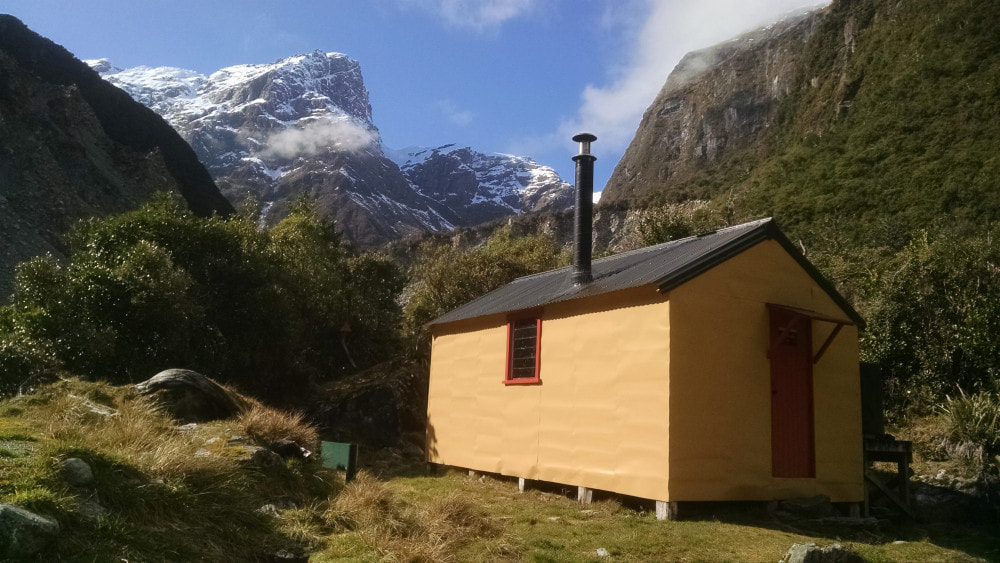 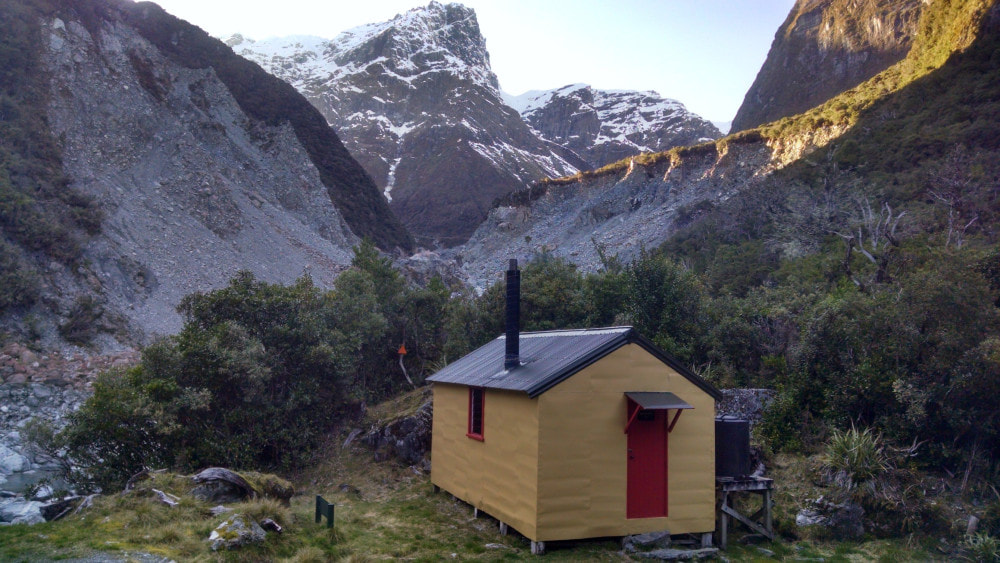 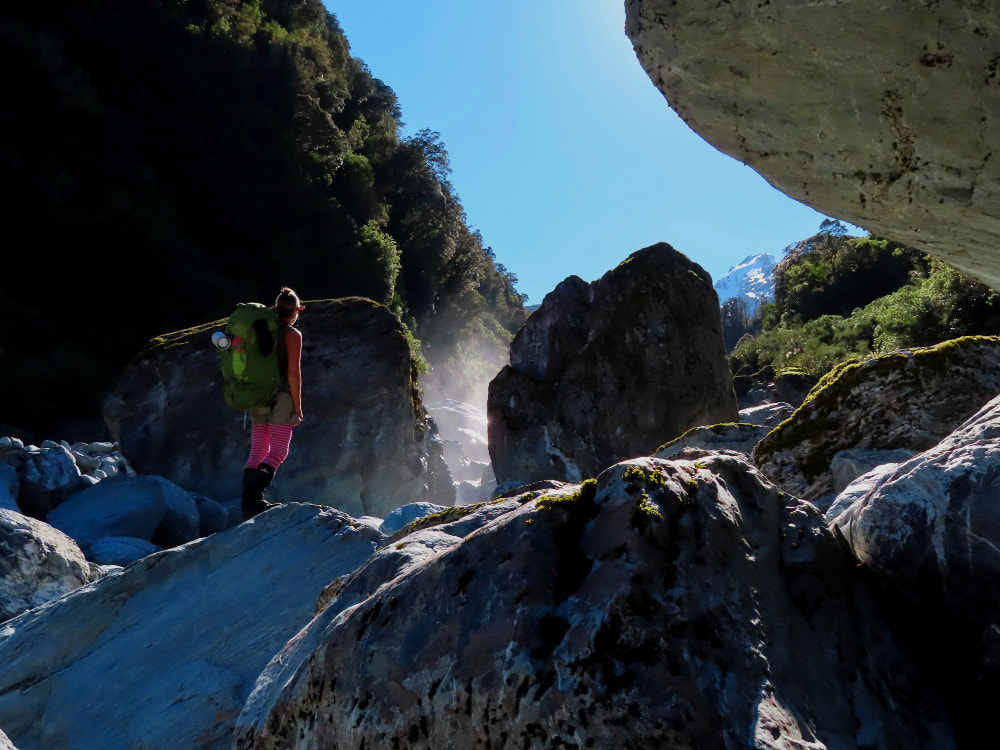 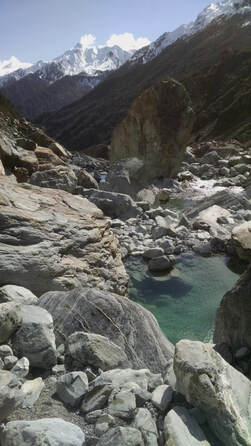 Location
Wanganui catchment. Map BW18. Grid Ref: E1425216/ N5213724. Altitude 685m. Smyth Hut is located in the head of the Wanganui valley. It is an absolutely stunning wild setting that can be accessed in a long day from the roadend by a fit party, depending on river conditions. Most people take a couple however. The riverbed up and downstream of the Hut is a mass of huge boulders, cascades, and deep icy pools. In 2013 a big chunk of Mt. Evans which is in the head of the catchment, collapsed, bringing a tsunami of water downvalley that took out huge chunks of hillside and wiped out the Smyth swingbridge. The flash flood went around both sides of Smyth Hut leaving it on a small island of forest about 200m long by 50m wide. It would have been an interesting night had anyone been staying there. Just up from the Hut the impressive Buttress of Mt. Whitcombe dominates the skyline. Its vertical walls are the abode of Himalayan tahr and chamois. There is the added attraction of a hot spring in the main riverbed 200m downstream from the Hut that can be dug out with shovels kept in the Hut. Smyth Hut has historically been low-use due to the ruggedness of the country. The majority of hunting parties fly-in to the hut. All of the crossings into the head of the valley require alpine skills, and the main valley route has become increasingly difficult with scouring and flood damage. The hut gets the odd climbing party, usually doing ascents of Mt. Whitcombe via the upper Vane Stream and Dainty, Lornty, and Leeb Glaciers, or occasionally Dan Peak.

Access
The access route to Smyth Hut from Hunters Hut in the mid valley has become more problematic over the years due to some very rough and unstable terrain and areas of slippage and scouring that have worsened with more frequent heavy rain events. The route is on the TL and comprises sections of riverbed travel interspersed with tracked detours around bluffs and slips. For a bit of contrast there are some lovely easy grassy flats in between the rough bits, but the detours continue to be problematic for folk in terms of marking and general stability. The first one around Poker Bluff climbs high across an actively eroding slip before dropping steeply to the River. It takes a good half an hour to get around a ridiculously short section of bluff, so fording to the TR just below it and back to the TL just above is tempting but not always possible. Winter is your best bet when flows are generally lower, or later in the summer when the main big snow melt is over. A ladder that is visible when traveling downriver partway down the bluff goes nowhere, and would be useful if shifted to the next bluff detour opposite Froth Creek where there is a tricky descent at the upstream end down a narrow rocky chute. The entry point to the chute is not visible when coming downriver, is not marked with anything, and would be tricky to locate if you didn't know where it was. This bluff can also be avoided by fording to the TR when River levels are low. The next detour section roughly opposite Spar Creek isn't necessary currently as the offending low rocky bluff can easily be scrambled over.

A rough sidle on a very eroded and unstable section of TL riverbank just above Poker Gully can't be avoided, but after this it is straightforward travel all the way to roughly opposite Galway Creek. A rough cascade of house-sized boulders starts here with a poorly marked detour on the TL that goes up a small dry creek bed and sidles around into Devastation Creek. You rejoin the riverbed here and it is rough going around boulders, and across active slips and track remnants to where the terrain becomes a bit more benign. The last half km of track is a highway in contrast having been recut by DOC when they were in painting the Hut in early 2019. Travel time from Hunters using all the detours is around six hours for a fit experienced party, and can be shortened considerably by fording at low flows. Allow 10-12 hours if coming from the Wanganui roadend.

Type
Smyth was one the last NZFS S70 six-bunkers and was built in 1974. It is lined and has woodburner, a long drop toilet, and a roof-fed watertank.

Condition
Smyth Hut is in good condition currently. It was repainted by DOC, and had a flue leak repaired in 2019 and was re-roofed in 2021. The toilet is getting a bit old but DOC are planning to fly a new one in this year some time. The tap on the water tank has a small hole that squirts water out the side when it is opened. There is plenty of flood debris to fuel the wood burner which is a very effective NZFS-era iron box that gets hot enough to cook on. People seem to be just chucking wood into the shed without cutting it into lengths that fit the burner.

Routes
There is a reasonably popular crossing to Smyth Hut from County Hut in the Waitaha via Smyth Saddle. River travel upstream from County Hut is reasonably straightforward with mostly gravel walking initially. There is one small gorge to negotiate around the 1060m contour, just before the basin opens out into tussock. Access up to the Saddle is up a prominent side-creek that enters the County at E1426840/ N5217273 (BW18 268 173). Exit the Creek up a gut on the TL around the 1450m contour and climb through a band of large, shattered boulders onto a flat bench by point 1667m. Head SW along the 1600m contour and head down a prominent spur that drops in a NW direction towards the Smyth/ Bradshaw confluence. Veer South off the spur at the flat area at the 1230m mark, and drop directly down into the Smyth. Travel downriver is rough with large boulders fringed by alpine scrub. The TR easier lower down if you are able to ford. Allow a full day from County Hut to Smyth Hut. The swingbridge across the Wanganui River just above the Smyth confluence was washed out in 2013 and fording can be problematic and dangerous at peak flows.
A more direct route between Smyth and County that hasn't been tried to the best of my knowledge but looks doable on the map is up into the head of Bradshaw Creek, over the saddle at Point 1715m and down the big side-creek, two up from Canary.
Smyth Hut can be accessed along the Smyth Range fromn Scamper Torrent Hut or Moonbeam Hut in the Waitaha valley. These are alpine trips and snow gear would be required for most of the year, except perhaps late summer and autumn. The upper Smyth River can be accessed from the saddle at point 1830m, NE of Mt. Barry (travel gets difficult further along the Range). Once in the upper Smyth it is good travel down to just below the Bradshaw Creek confluence.

The Wanganui River continues for another kilometre upstream from Smyth Hut, then branches and becomes the Evans River running NE, and Vane Stream running due South. The riverbed up to the confluence is a mass of flood rubble and huge boulders. The Vane is reasonable travel into its head, with the usual large boulder scramble in its lower reaches. Access up onto the Mueller Glacier, and Mt. Lord and Strachan Pass is straightforward alpine travel. A high level traverse is possible from Camp Saddle and Poker Gully basin, along the Lord Range to Blue Lookout and back down to Hunters Hut.

The Evans was bored out by the the 2013 flash flood and is rough and bouldery travel. A significant number of parties heading up there have had to turn back after being able to ford the Vane. This is usually in high summer when opaque melt-water swells the Stream. At the 1060m contour in the Evans there is a small lake created by the flash flood which has good campsites at its head. From here travel up the Evans Glacier takes you over Full Moon Saddle onto the Bracken Snowfield. The most frequently used access routes onto the Bracken are up the Ramsay Glacier from the Rakaia and over Erewhon Col, or from Whitcombe Pass via the Sale Glacier, the upper Ramsay and Erewhon Col.

Repairs needed
The water tank tap needs patching or replacing. The tracked sections of the route will need ongoing work to mitigate damage on the actively eroding bits. DOC may get up to do some work on it when they do the Hunters track later in the year.

Provisions on Site
An aluminium wash basin, two large billys, a camp oven, numerous frypans, plates and utensils, an old pressure cooker, a large and small shovel, a broom, a hearth brush and shovel, a metal bucket, and some spare louvre panes, an axe and a bow saw. Under the Hut there are various odds and sods and an aluminium ladder
Powered by