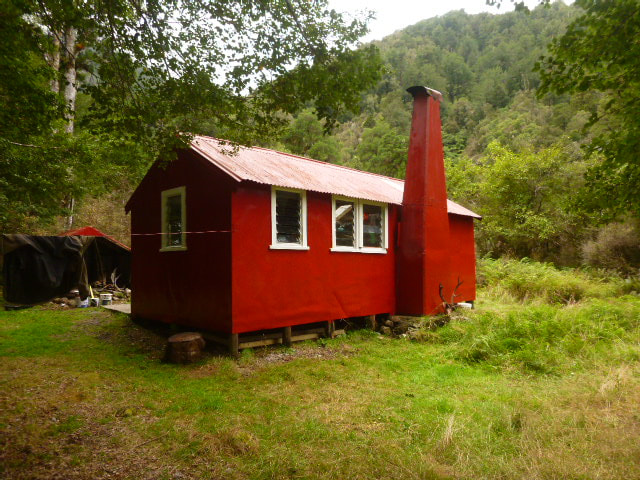 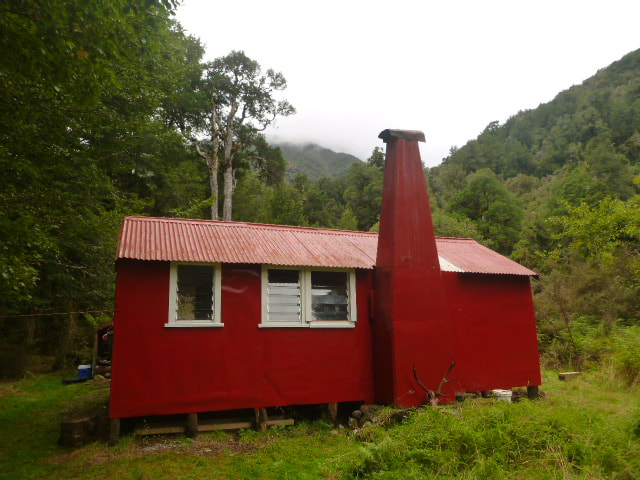 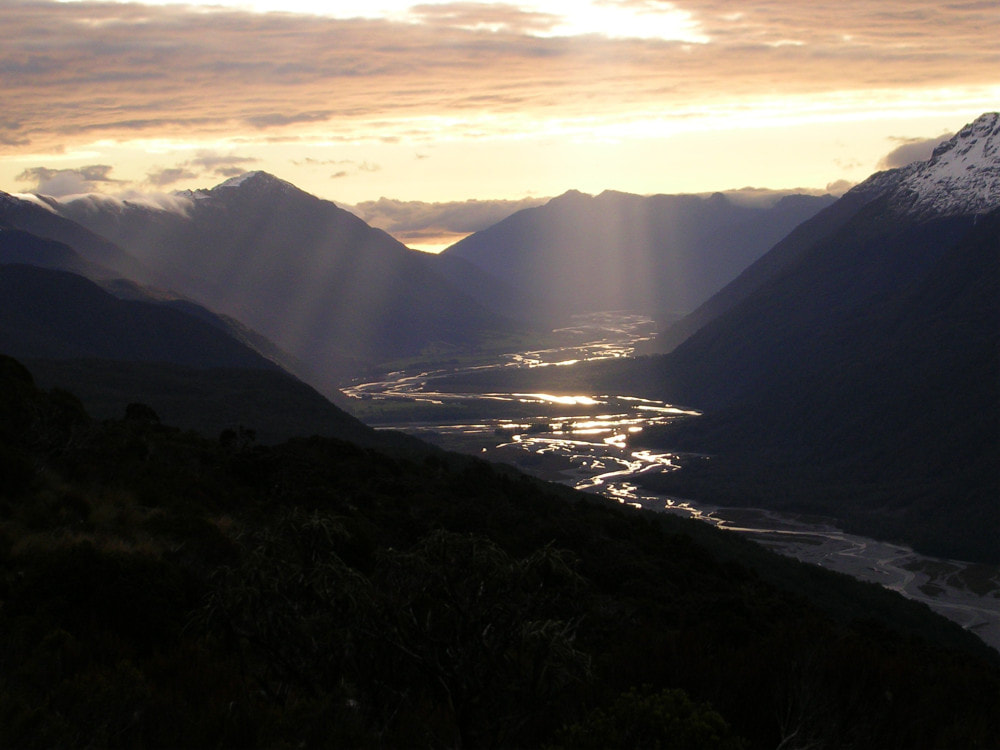 Maintenance Status
Kiwi Hut is a maintain-by-community project by Graeme Jackson of Hokitika whose family have a long-standing connection with the Taramakau valley. Kiwi was lined up for removal by DOC following a policy review in 2004, but they later back-tracked when opposition to the decision by hut users mounted. At the time the Hut was used primarily by local hunters and trampers however that was before the development of the Te Araroa Trail which now runs down the Taramakau valley. Since the Trail's inception visits to Kiwi hut have risen exponentially, a reasonably good argument for it going back to being serviced by DOC, although it's probably getting a better level of care under Graeme at the moment. A while back he obtained some Back Country Trust funding to carry out some needed repairs and repainting and has just received a second grant to replace the ageing open fireplace with a woodburner.

Kiwi Hut is a relatively easy three-hour walk from Aickens corner on SH 73 and is an ideal introduction for kids and the less-experienced to the the back-country experience. Its accessibility by high-stud 4WD vehicles also leaves it vulnerable to the hoon element and so having a local as caretaker may have a bit of protective influence.

Location
Taramakau catchment. Grid Ref: E1495191/ N5265340 (BU21 952 653). Map BU21. Altitude 340m. Kiwi Hut is located on the TR of the Taramakau on a bush terrace between Jacksons and Michael creeks. Prior to Graeme's input the Hut had become hemmed in by the surrounding beech forest. DOC assisted assisted him with the felling of some of the closest trees, allowing much more light and ventilation to get in. There is a large grass clearing just below the Hut, then a narrow band of forest before the main River flat.

Access
Access to Kiwi Hut is up the Taramakau valley from Aickens Corner on State Highway 73. Fords of the Otira and Taramakau are necessary and also the Otehake if folk choose to stick to the TL of the valley. None of these rivers are worth messing with when rain causes them to rise above normal flows, so good weather window is essential and a few days extra provisions in case you need to wait for levels to drop. From the car park at Aickens Corner follow the markers along the paddock fenceline, then through a gate to the Otira River. The best crossing currently is a couple of hundred metres upstream from here where the River braids. Cross and head due east across a gorse island to the track start which is marked by a large orange triangle. If the Otira is unfordable there is a flood track down its TR from the Deception Footbridge. This adds a good hour to the trip and if the Otira is running high, the Taramakau and Otehake will most likely be as well.

Follow the track from the Otira confluence along the bush fringes on the TL of the Taramakau to where it comes out onto an old 4WD trail. This is followed past the Lake Kaurapataka turnoff (100m before Pfeifer Creek) and ends abruptly at the River's edge. The Taramakau can be forded diagonally here (there are normally a number of braids that make fording easier) and the TR followed. Staying on the TL isn't problematic, however a 15 minute bush bash is required around 2km above Pfeifer Creek where the River has cut in on a bend. Further up the Otehake needs to be crossed and currently it runs swiftly in a single channel at the confluence. You may need to head upstream a bit to where it widens and flattens somewhat. A short distance above the confluence poles lead diagonally across the braids of the Taramakau. A sign on the grassy flat around 600m upriver from Jacksons Creek indicates the start of the track to the Hut. It leads through a narrow band of beech forest and across a big grassy clearing to the low terrace on which the Hut is sited. Allow around two hours to reach Kiwi Hut from the highway.

Type
Kiwi Hut is a lengthened version of the NZFS S70 6-bunk design. It still has its open fire, is lined, and has large vestibule at the door. There is a roof-fed water tank, a woodshed, and a longdrop toilet.

Condition
Kiwi Hut is in reasonably good condition currently. Graeme has repainted it and replaced some piles and rotten window frames. The chimney is nearing the end of its life and has been patched by Graeme in a few places. The plan was to use the latest BCT grant to install a woodburner in the the existing housing but this turned out to be in too poor condition, so it looks like the chimney will be removed now and the burner installed internally.

Routes
It is a couple of hours of mostly river travel on the TR from Kiwi Hut up to Locke Stream Hut. It is possible to ford to the TL in places to get a better line of travel, but doing this probably won't make a huge difference to travel times. A ford to the TL is necessary at some point however as the Hut itself and the last section of track from Locke Stream is on the TL.

The track to Townsend Hut starts around 20 minutes upriver from Kiwi Hut on the TL of the valley. Head along the grass flats on the TR initially, then cross to the TL just above where Michael Creek comes in. The route commences at a large orange triangle on the TL fan of the unnamed creek 400m upriver from Michael Creek at GPS REF: E1499016/ N5265136. Markers lead up through the rocks, regrowth and dead spars to the creek bed which is followed up past a small fork on the TR. At around 520m (GPS Ref: E1499387/ N5264622) the track proper exits and climbs steeply up the bush faces onto a narrow ridge. It follows this up through the sub-alpine zone to the lip of the scarp on which the Hut is located. The last stretch along the scarp is through scrub and open tussock with small tarns. The tracked sections up to the Hut are in pretty good condition currently. John Roper-Lindsay and Dan Murphy did some trimming and marking on the lower bits in July 2020 and I worked on the final approaches to the Hut in November. Allow 2-2.5 hours for the trip from Kiwi Hut to Townsend Hut, or 4-5 hours from the roadend.

Koropuku Hut can be accessed from Kiwi Hut via the lower Otehake River. Ford to the Taramakau and head down the TL bank to the Otehake confluence. Boulderhop up the Otehake for around an hour, crossing and recrossing where necessary. The start of the track to Koropuku Hut is marked by a large orange triangle opposite where the Lake Karapataka track drops down to the River. A swingbridge marked here on older maps was removed by DOC in 2012. The track enters the bush and follows a spur up to the tussock line and is is marked with red, or occasionally white permolat. It has been maintained for a number of years now by Frank King and Honora Renwick of Christchurch.

There are great views of Lake Kaurapataka and Mts. Alexander and Pfeifer from the Koropuku tops. Cairns and the odd post lead South from the bush edge along a bench and up a series of small terraces to a large tarn at 1495408E/ 5260491N (BV21 954 605), and along to another group of tarns East of Point 1259m. Drop into the Koropuku catchment down a scree just South of the tarns. The scree becomes a steep gut which is skirted on the TR. The gut becomes a creek just past a large rock outcrop with a track exiting and entering the bush on the TL at the top of a series of waterfalls. The track follows a steep gut down before rejoining the creek. This section is starting to overgrow and was given a cursory trim in 2012. A second section of track exits the TL further down, dropping to around the 850m contour before leveling and sidling up the TR of the Koropuku. The terrain eventually flattens and the track passes through a clearing named "The Orchard," 150m from the Hut. Allow 6-8 hours from Kiwi Hut to Koropuku Hut.

Access to the tops behind Kiwi Hut is possible up most of the leading spurs which have fairly well-defined deer trails on them. The creeks on the other hand should be avoided without prior knowledge of their topography. In good conditions it should be possible to cross over the Range to Top Crooked and Top Trent Huts. I recut and marked an old NZFS track from the Mt. Dixon tops down to Top Trent in 2011. There are three snow stakes and a few small tarns on the ridge just above the top entrance of the track, which is located around E1504392/ N5271380 (BU21 044 714). A 100 metre band of low alpine scrub between the tussock and the first stake is fairly easy to push through. The track drops down the spur on the TL of an unnamed side-creek, flattening near the bottom and veering West across the terrace to the Hut.

There is mention in the Top Crooked hutbook of an old, unfollowable track up Toms Creek. I started work on an old tops track up the spur behind Top Crooked Hut in 2018 and managed to cut and mark it to the 1000m contour before losing the line in thick sub-alpine forest around E1492594/ N5270290 (BU21 926 703). I have no idea where it hits the tussock and there is still a good 300 vertical metres of scrub and big boulders to go. A project for someone maybe? There looks to be a good route to the tussock from the Taramakau side up the first side-creek upriver from Toms Creek. A chute and scree coming in on the TL about 500m up this creek takes you straight to the open tops.

Graeme uses a route up the ridge between Jacksons and Michael Creek. There is a lot of windthrow from the flat to the top of first hump, then a mix of deer trails and bush-bashing to Point 1077m. Sidle from here into the head basin of Jacksons Creek, then back up onto the ridge.

Repairs planned/ needed
Aside from the planned chimney removal and woodburner installation, Graeme has requested that DOC add a couple of bunks to help cope with Te Araroa traffic.

Provisions on Site
Two axes, a shovel, a hearth brush and shovel, two hammers, a stainless steel bucket, an aluminium basin, two pots, a kettle, a plastic bucket, a bow saw, a saw, fry pans, a spare louvre pane, a broom, and a small pan.