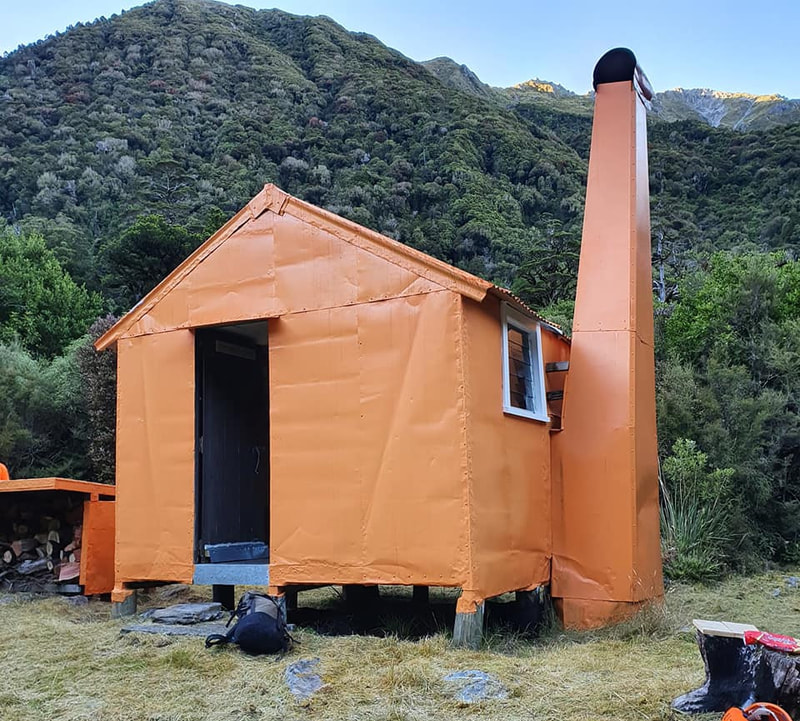 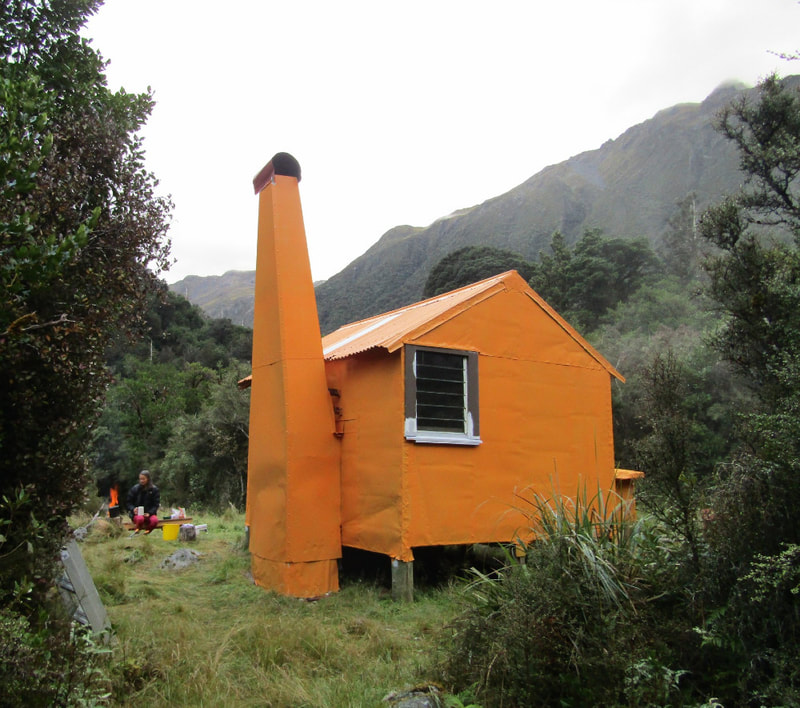 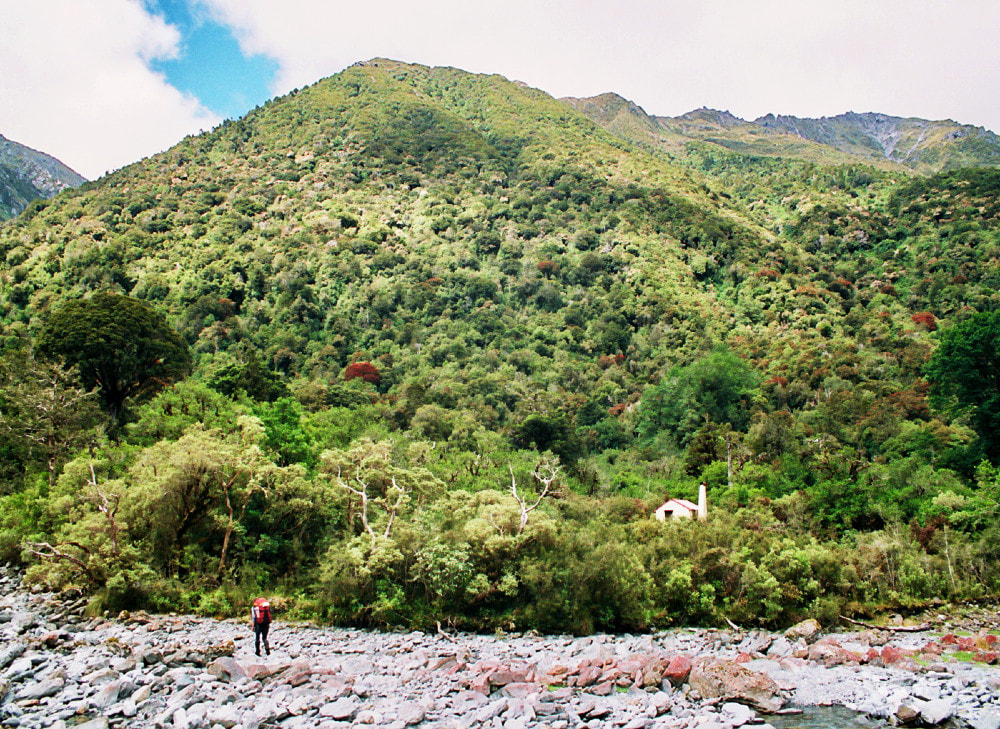 View from the Morgan tops: Photo Paul Reid 2015
Maintenance Status
Top Crooked Hut is designated as minimal maintenance, and DOC last cut the track to it in 2019. Paul Reid of the Permolat group got hold of some Back Country Trust funding in 2015 to do some hut maintenance and has made three trips in with various people to do this. Helicopter backloads of materials were provided by DOC.

Location
Crooked catchment. Map BU21. Grid Ref: E1492802/ N5271190 (BU21 928 712). 575m altitude. West Coast, inland from Greymouth. Top Crooked Hut is located in the headwaters of the Crooked valley on a terrace on the TL of the River. It was shifted to its current site from one closer to the river by the army in 1991 because of an encroaching shingle fan. The forest around the hut is predominantly rata/ kamahi and the peaks of the Kaimata Range and Morgan tops provide a picturesque backdrop. The Crooked is a rugged little valley with great remote ambience. Visits to the hut are infrequent, mostly groups doing the Lake Morgan Tops circuit.

There is helicopter landing access in the original hut clearing just below the Hut.

Type
Top Crooked Hut is an unmodified NZFS S81 four-bunk design with an open fire. It is believed to have been built by Don Cowlin, the Ranger at Ahaura between 1963 and 65. It is lined with the original tar paper. There is a toilet and water is from the River.

Condition
Top Crooked Hut is in good condition currently. DOC painted and resealed it and did some basic maintenance in 2004 and revisited in 2012 to rebuild the woodshed. In 2015 Paul's crew added a door flashing and flashings to cover the ends of the floor bearers. Loose and rusted lead-head roof nails were replaced with hex-head rubber washer screws, as were any flat-head nails that were lifting on the exterior wall cladding. A significant amount of regrowth was cleared away from the front of the hut to let more light and air in to the site. A second group went in autumn 2016 and did some roof repairs. In November 2017 the exterior was spot painted by DOC and a spruce-up partially done. Paul led another team in February 2018 to paint the Hut exterior, toilet, and woodshed. DOC went in and did some more work in February 2021. They dug out and fashioned some stone steps up the bank to the Hut, replaced table top with a stainless steel one, fixed a couple of seats, painted the window frames, replaced sky-light, replaced the mattress covers and removed the lead-head nails in the toilet.

Routes
The route from Top Crooked onto to the Lake Morgan Tops is via a track recut by DOC in February 2021. The track climbs a spur on the TR of the Crooked River. It begins on the TR, 100m downstream of the hut. Orange triangles lead from the original Hut clearing to the River, and there is a large orange triangle on the TR bank. The track proper starts at a small stream that runs in against the bush edge, around E1492748/ N5271293. It climbs steeply in a direct line to the bush/ scrub line and it is well marked with both orange triangles and pieces of permolat. Very close to the bush/ scrub line is a short band of large boulders which are crossed to a small rocky knoll which provides extensive views of the Crooked Valley.

The track becomes a ‘route’ from this point marked by orange sleeved waratahs and cairns. It heads up through some low scrub to an obvious high point, drops into a shallow depression, then climb/ sidles in a NE direction to the crest of the Morgan tops.
The last waratah is on a tussock ridge at 1420m (E1492850/ N5272930) just below the top of the range. Travel is easy and reasonably level from here along to point 1489m. Drop down to the low point between point 1489m and point 1422m, and from here down an obvious rocky gut to Lake Morgan, where there are numerous good campsites. Continue around the Lake and down the TR of the outlet creek. Cross to the TL just below a set of small waterfalls onto a flat bench here with tarns. Lake Morgan Hut is visible from here in fine conditions. Drop from the bench in a NE direction and recross to the TR of the outlet creek. Sidle from here at roughly around the 1120m contour line to the Hut, which is a bench above the gorge in the outlet creek. Allow 4-6 hours for the journey from Top Crooked Hut to Lake Morgan Hut.

Access to the Lake Morgan tops is also possible from the head basin of the upper TR branch of the Crooked River. Climb from here up the tussock slopes onto the main range.

Cone Creek Hut in the Haupiri is accessed by heading East from point 1489m and around the ridge above the TR of Lake Morgan. The ridgeline just to the NE of the 1500m high point (east of point 1489) has a band of rock that you have to drop down the Lake Morgan side to get around. If you are comfortable with a little climbing you don’t have to go down too far, but if not you would have to drop a reasonable way to get around it. Drop into the top basin of the unnamed side-creek that enters Cone Creek just upstream of the Hut. Sidle NE at around 1200m to the spur on the TR of the marked TL fork of the creek and drop down this into the lower basin where the two marked branches meet. Cruise tape and cairns mark the start of the track out of the creek near the lip of the basin. It sidles through patchy scrub to a small saddle on the uphill side of a prominent rock outcrop. The track drops down a rocky gut to a steep scree. Follow this down to Cone Creek. The tracked sections of this route were recut and marked by permolat in 2015 and 16. Allow six or so hours in good conditions for this trip.

There are other tops routes in and out of the upper Crooked from the Haupiri and Taramakau catchments, which would all require reasonably high levels of skill and fitness. In the Top Crooked hutbook the is an account of a trip up an old, unfollowable track in Tom's Creek on the Taramakau side of the Kaimata Range.

There is an ancient NZFS track up the spur behind Top Crooked Hut that would once have provided tops access. I managed to cut and mark it up to the 1000m contour in 2018, before losing the trail in some fairly thick and hideous sub-alpine forest (around E1492594/ N5270290). I have no idea where it hits the tussock and there is still a good 300 vertical metres of scrub and big boulders to go. A project for someone maybe?

There looks to be a good route to the tussock from the Taramakau side up the first side-creek upriver from Toms Creek. A chute and scree coming in on the TL about 500m up this creek takes you straight to the open tops. The creek itself is reportedly an epic scrub bash. The upper TL Branch of the Crooked is negotiable according to one hutbook entry.

Repairs still needed
When the Hut was shifted up onto the terrace in 1991 the chimney was placed upon a base of rocks rather than a cement pad, and the hearth cemented over top. It is now starting to lean out somewhat from the hut and there is a horizontal split in the iron on the South side at about 1.5m, which can only get worse over time. Some split seams where the chimney flashing abuts the chimney are letting water in and need re-riveting. The chimney needs relevelling over the longer term, and patching over the horizontal split. A step outside the hut on the existing concrete pad would be a great addition as currently it is a large step up or down from the hut onto what can be a slippery pad. Installation of timber to enclose the piles and underfloor area of the hut would help keep the hut warmer and prevent rain driving in under the floor with its associated impact on rising damp. The toilet could do with some building paper under the roofing iron to stop the drips. A few more waratahs are needed on Morgan tops route at the drop-off point down towards where the track starts on the bush-line.