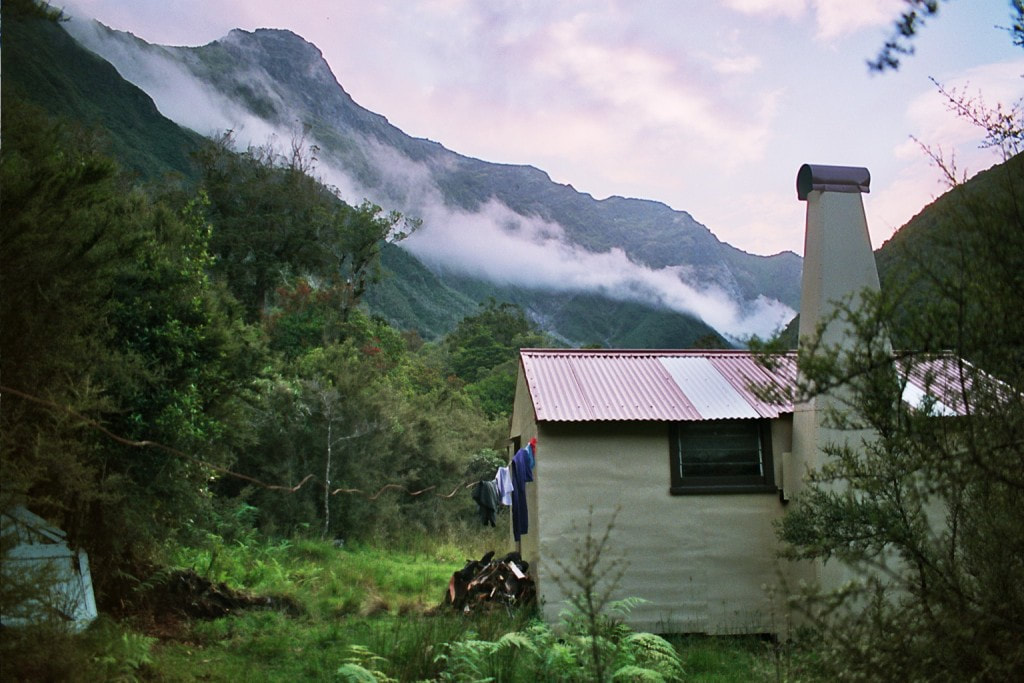 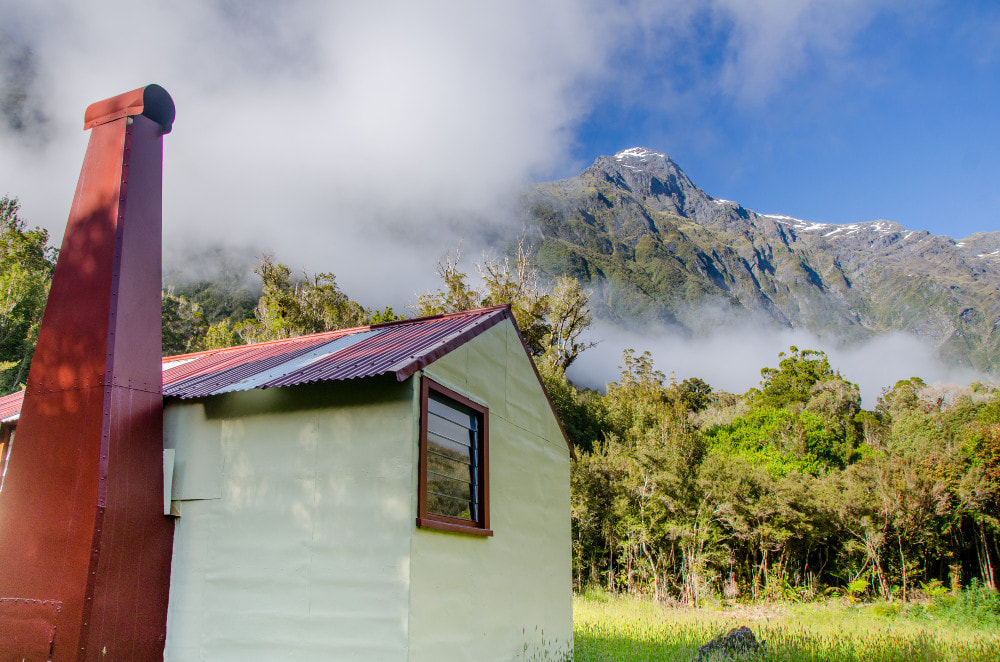 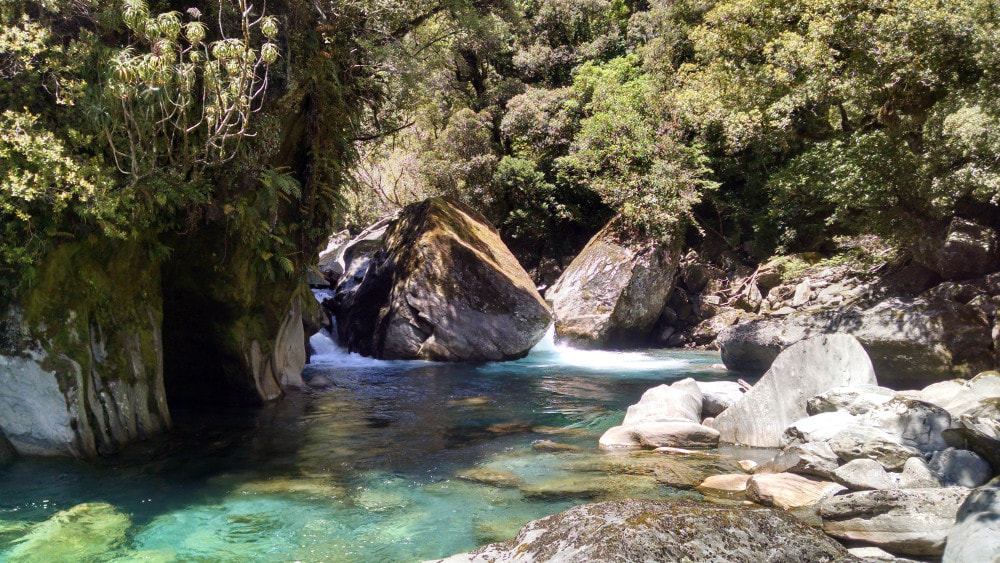 Location
Crooked River catchment. Map BU20. Grid Ref: E1487860/ N5270715 (BU20 879 707). Altitude 415m. Jacko Flat Hut is located on the TL of the Crooked River at the top end of Jacko Flat. The beech covered slopes around the Flat rise rapidly to sheer rock on the Northern face of Mt. Alexander. There are two gorges in the lower Crooked valley and the terrain is rough underfoot. Upstream of Jacko Flat the River is a mix of rougher terrain and reasonably gentle river flats. The Crooked has always been a fairly low-use valley, with visitor numbers declining further in the 90's and 00's when the tracks were left unmaintained for a lengthy period. DOC started regularly recutting them again in 2009, with the last lot of maintenance taking place in 2015.

Access
Crooked Valley access is up the old Rotomanu - Kopara Road, which turns off Bell Hill Road just after Puzzle Creek. A gate here is often padlocked but the key is available from R.W. Burgess (03 738 0177) at the first house on the Rotomanu side of Puzzle Creek. The road to the track start is excellent and easily negotiated by any vehicle. The Jacko Flat track starts behind the Kopara Reserve sign adjacent to the piles of the old Crooked River bridge. It climb/ sidles around the first gorge for an hour or so, and the going is undulating and boggy in places. The track then drops to the River, follows the boulders for a short section, then climbs back on to the bush terraces, with plenty of ups and downs into gullies and creeks, to just before the Morgan River confluence where it hits the riverbed again. There is a short stretch of boulder-hopping here before the track re-enters the bush and cuts across a bend in the River to a short stretch of boulders leading to the start of the second gorge.

The track re-enters the bush and climb/ sidles along some steep faces on the TL above the river. The terrain is steep, uneven and rocky underfoot with two short riverbed sections. After an hour or so of sidling Jacko Flat is reached and the route is poled on the open grassy sections, re-entering the bush a short distance below Jack's Creek (unnamed on the Topo Map). Jacko Flat hut is in a grassy clearing surrounded by small hardwoods, 20 metres from the river. Allow 4 - 5 hours for the trip up from the road-end. DOC went through the track with a chainsaw and marked it well with orange triangles in 2015. Brent Smith and Charlie Ledbrook did a bit of work on it in November 2017 and say it is still in pretty good condition, with minor re-growth and a bit of windfall, but no problem for anyone with some West Coast experience.

The Hut clearing was widened by DOC in 2017 to allow plenty of space for a helicopter to get in.

Type
Jacko Flat is a standard NZFS S70 six-bunk design with an open fireplace built in the 1960's. The walls and roof are lined. There is a toilet. Water is from the River. A wooden plaque on the wall lists the names of some of the NZFS workers involved in maintenance during the late 1970's.

Condition
Jacko Flat Hut was repainted by DOC inside and out this year and had some fireplace repairs done. There was no sign of rust anywhere, nor water ingress issues. Some minor louvre repairs were also made. The floor is starting to sag a bit in the middle of the Hut, and is a bit spongy near the wall on the north side of the door.

Routes
The track from Jacko Flat to Top Crooked Hut was chainsawed and remarked in 2015. It passes through fairly open beech forest initially, hits the river and then climbs up and around a small gorge. After this it alternates between bush face and riverbed sections, climbing gradually towards the headwaters. Top Crooked Hut is up a short (20m) side track from the clearing beside the river at the end of the track (where the hut used to be sited before being moved higher in 1991). The hut is visible from the riverbed on a low terrace on the TL. Allow around 2.5 - 3 hours to Top Crooked Hut from Jacko Flat Hut.

An old NZFS track up Jack's Creek onto the Alexander Range no longer exists in any useful form, although the occasional bit of permolat can still be found. It is necessary now to follow the Creek and there are a couple of waterfalls that need skirting in the lower and mid sections. The upper Creek is reportedly an unpleasant scrub-bash. An entry in the Jacko Flat Hutbook describes a trip down from the Alexander Range tarns taking seven hours, although the party concerned had plenty of stops.

The spur directly opposite Jacko Flat Hut has been used on occasions to access the Lake Morgan tops and Lake Morgan Hut It looks OK on the map, but accounts in the Lake Morgan hutbook describe an extensive and difficult alpine scrub band with bluffs from 700-1100m. Although it is further, it is probably quicker and less hassle to continue up the main valley track and use the maintained tops track opposite Top Crooked Hut.

Repairs Needed
Some underfloor piling work will be required at some point. The materials for this are under the bunks. Some more trackwork would be beneficial in keeping on top of the seedling regrowth.

Provisions On Site
There are three billies, a pot, a large camp oven, an aluminium wash basin, a large plastic water container, a stainless steel bucket, an old NZFS food drum with a bit of food in it, two bench seats, some rat poison, a small container with large staples, a fish slice, an axe, two next to useless bow saws, a broom, a hearth brush and shovel. Under the bunks are 10, 125 x 125mm x 0.9 metre treated piles and a 40kg bag of eazymix cement. There are odds and sods of timber under the Hut.
Powered by