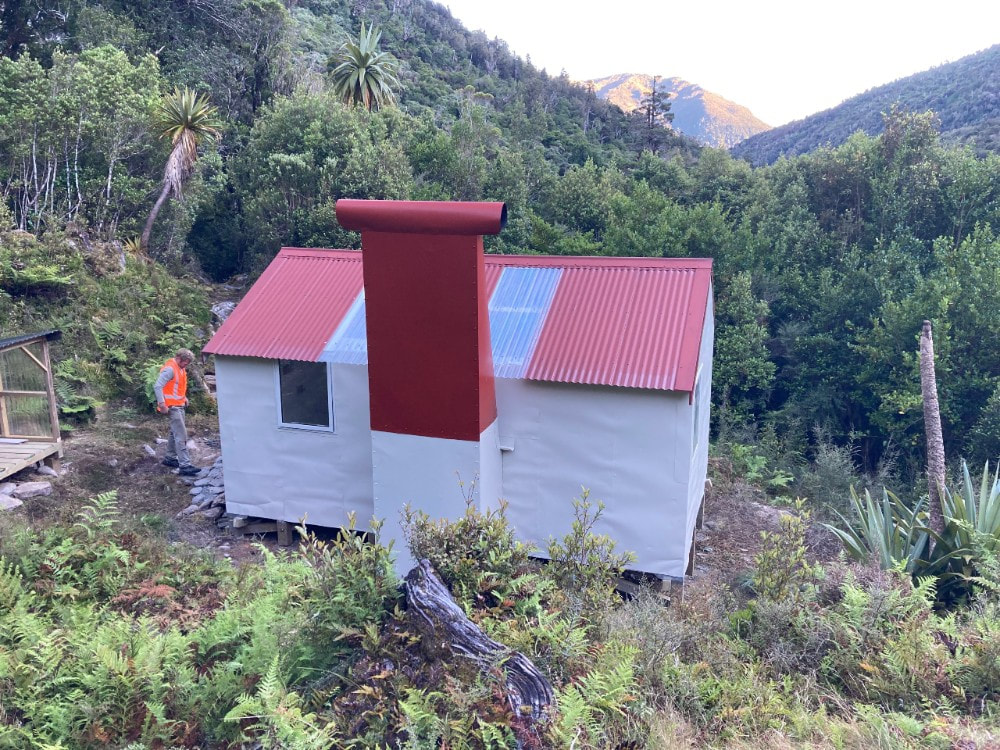 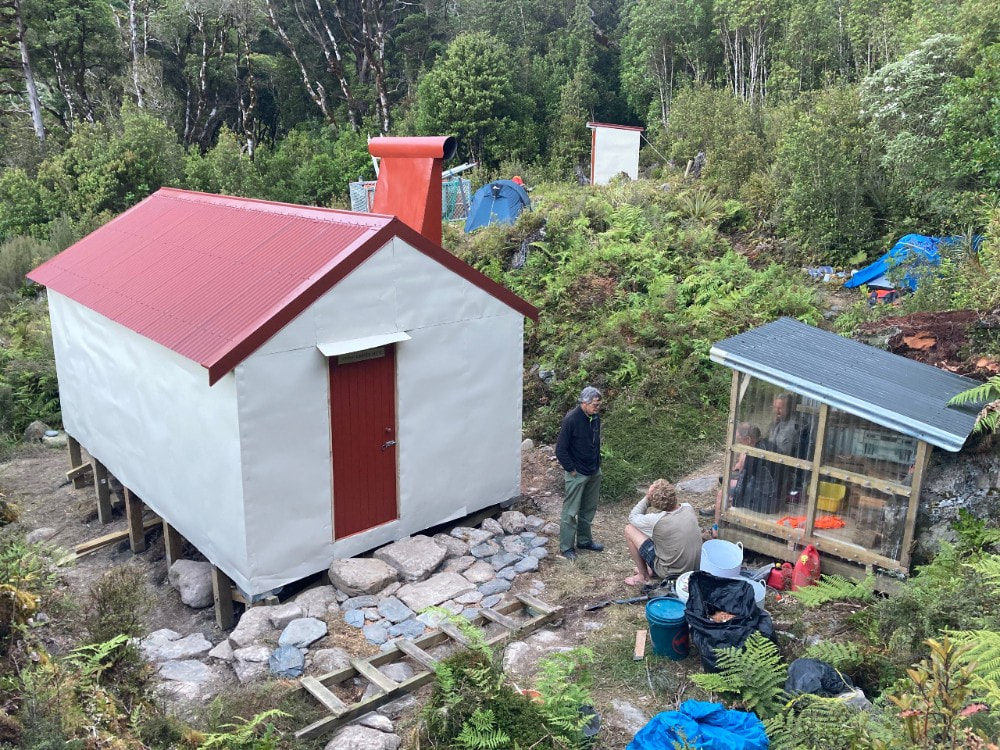 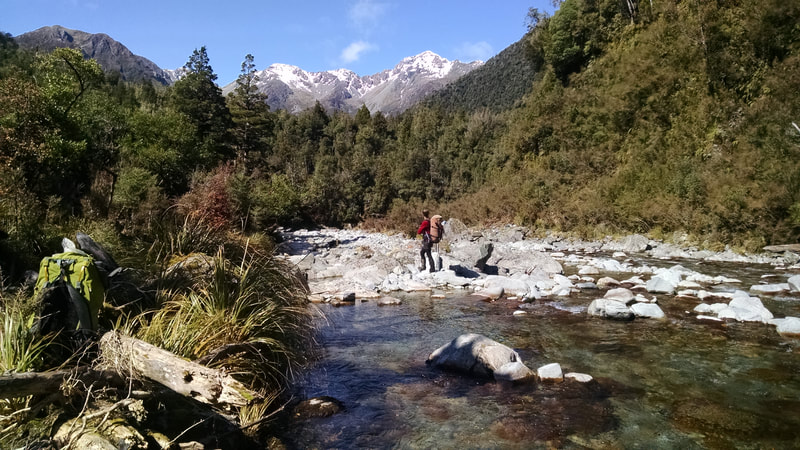 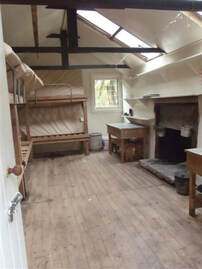 Hut interior
Maintenance Status
Cone Creek Hut is designated as minimal maintenance. The track up the TL of Cone Creek to the Hut from the Haupiri valley was recut by Permolat members some years back. Jack Grinstead led the project using Back Country Trust funding and he and his party also did some work on the tracked sections of the route from the Hut up onto the Lake Morgan tops. I did some more retrimming and marking on the tops route in 2020. In January 2022 the BCT made use of Kaimahi for Nature funding to re-roof and re-pile the Hut, and replace the louvre windows.

Location
Haupiri catchment. Map BU21. GPS Ref: E1496202/ N5273673 (BU21 962 737). Altitude 700m. Cone Creek Hut is located in the Haupiri catchment on the TL of Cone Creek in a remote, beautiful, rugged and not particularly well-known section of the central Southern Alps. The high-altitude forest around the Hut comprises rata, kamahi, pahautea (mountain cedar), Hall's Totara, quintinia, and toii (mountain cabbage tree). Kiwi can be heard calling at night from the Hut and there are weka, toutouwai (bush robin), kea and whio (blue duck) in the vicinity. The Lake Morgan tops are within close reach and accessed by a route just downstream from the Hut. The Hut averages around 10 visits a year currently.

Access
Access to Cone Creek commences at the O’Shanessy Creek car park on the TL of the Haupiri valley. The road to the park is on Gloriavale Christian Community land and permission from the Community is required for access. There is a DOC parking area at E1495872/ N5281765 (BU21 959 818)and Gloriavale is not keen on allowing cars to continue further along the farm track to O'Shanessy Creek (a 20 minute walk). This last section is fairly rough with numerous small fords not great for 2WD. A high-stud 4WD might get you another kilometre up from O'Shanessy Creek through some pine plantations but has numerous major boggy patches. It eventually hits the River at E1498986/ N5279310 (BU21 990 793). Foot travellers can cross here and make a beeline upvalley, crossing back to the TL one kilometre further up, or just continue up the TL along a rough trail over a low terrace to the next river flat. From here it is an easy amble over grassy flats on the TL with a five minute section of marked track just before the Cone Creek confluence. It takes about an hour and a half to get to here from the DOC car park. There is a concreted-in hot pool on the Elizabeth Hut track on the TR of the Haupiri 50m above the the Cone Creek confluence.

The Cone Creek track starts at the confluence and goes up the TL of the Creek, climbs and sidles around a small gorge before dropping back to river level at a sharp bend. The very start of this section currently has a few patches of windrow that need skirting. After the track hits the Creek there is a kilometre of fairly easy river travel which at normal flows can be waded across the braids to get a better line. If the Creek was running high you'd need to stay on the TL and take the odd small bush detour. A track exits at the end of this section and climbs vertically up the side of the hill for about 10 minutes, then levels and sidles up-valley crossing a large side creek before dropping back to the river. A short section of boulder travel follows before the track re-enters the bush and sidles for an hour or so to the Hut. This last section is stony and undulating but well marked. A fit, experienced party should be able to make the journey from the Haupiri roadend to Cone Creek Hut in 4.5-5.5 hours.
There is a chopper pad right next to the Hut.

Type
Cone Creek Hut is an NZFS S70 six-bunk design with open fire. The Hut was built by D. Green and R.L. Sherwood of the NZFS in March 1965. Their names and the date are pencilled on one of the cross braces in the roof. The Hut has a toilet. Water is from creeks on either side of the Hut.

Condition
Cone Creek Hut should be in pretty good condition now. In 2012 DOC Greymouth did some chimney repairs, replaced the ridging, clearlight and some roofing iron, cleared scrub around the Hut, and painted the woodshed and Hut interior. In January 2022 the Kaimahi For Nature group led by Ollie Clifton replaced the outer piles adding a brace system, replaced the louver windows, built a new woodshed, re-roofed the hut in coloursteel, replaced the open fire insert, painted the hut and gave the toilet a good spruce up. The rest of the team comprised ​Al Ritchie, Andrew Riley, Pete Sinclair and Pete Braggins. 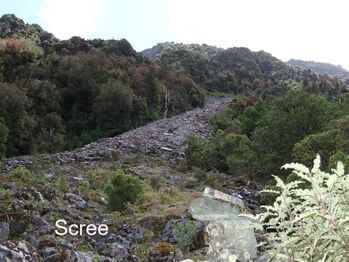 Routes
The route to the Lake Morgan Tops is up a large scree five minutes downriver from the Hut. The scree is steep an loose. Cairns mark the exit point on the TR around 900m (GPS Ref: E1496013/ N5273908) and from here a track leads up through the sub-alpine forest. It continues up a boulder-filled gut through a small saddle between a rock outcrop and the hillside, and sidles from here through low scrub and open patches into the TL fork of a small side-creek. Head up the ridge between the two forks to a flat area with a tarn above a second small basin on the TR of the spur. Continue up the faces from here onto the crest of the range and drop down the other side to Lake Morgan. The descent is straightforward in good conditions and there are numerous good campsites around the Lake. The tracked portion of the route above the scree was retrimmed and marked in 2020. The sidle section into the basin still needs of a bit of work done on it.

If crossing over to Cone Creek from the Lake Morgan side, avoid heading too far along the side-ridge towards Point 1368m. Instead, drop from the ridge at around E1494804/ N5274769 (BU21 948 748) into the basin below. Sidle out of the basin at onto the spur on the TL and follow this down into the lower basin. The track out of the basin starts on the TL of the TL fork of the creek just above where it meets the TR fork (GPS Ref: E1495592/ N5273875). Allow 3-4 hours to for the crossing from Cone Creek Hut to Lake Morgan Hut in good condition, and around two for the reverse trip.
Top Crooked Hut and the Crooked valley can be accessed from Cone Creek along the Lake Morgan tops. The crest of the range can be followed in a SW direction until about 1km before point 1539m. The route down into the Crooked starts at a waratah on a ridge just off the main range at around 1420m (E1492850/ N5272930 - BU21 928 730). More waratahs lead from here in a SSW direction down a broad spur to the top entrance of a track which enters the scrub at a band of jumbled rocks around (around E1492715/ N5271960 - BU21 927 719). The track drops steeply down the bush faces to a grassy flat about 200m downstream from Top Crooked Hut. It was recut by DOC in 2021.

An alternative to this crossing involves a sidle around the top basins of the side-creek and over the saddle between points 1489m and 1436m into the upper TR branch of the Crooked River. This is followed down to the Hut. This route is more direct but is likely to be a bit rougher going than following the crest of the range.

Repairs still needed
It was a 50/50 call to replace the chimney in January 22 but at this stage it will be making do with the new inner fire surround and outer cladding repairs. There is always the option of replacing the open fire with a wood burner at some point. The tracked sections up to the Hut need a bit more trimming in places and some windthrow clearance down at the Haupiri end.

Provisions On Site
Three billies, an old NZFS storage tin, a broom, an axe, two rolls of yellow permolat and one of red, an aluminium wash basin, a plastic bucket, some spare louvre panes, a hearth shovel and brush, and an ash bucket.
Powered by