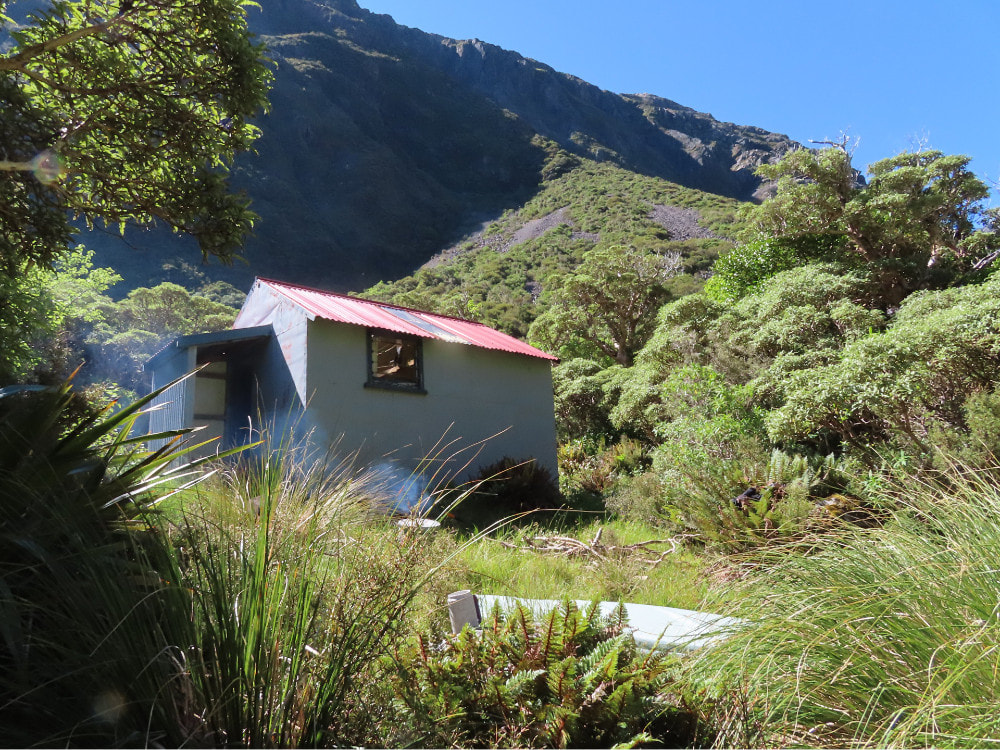 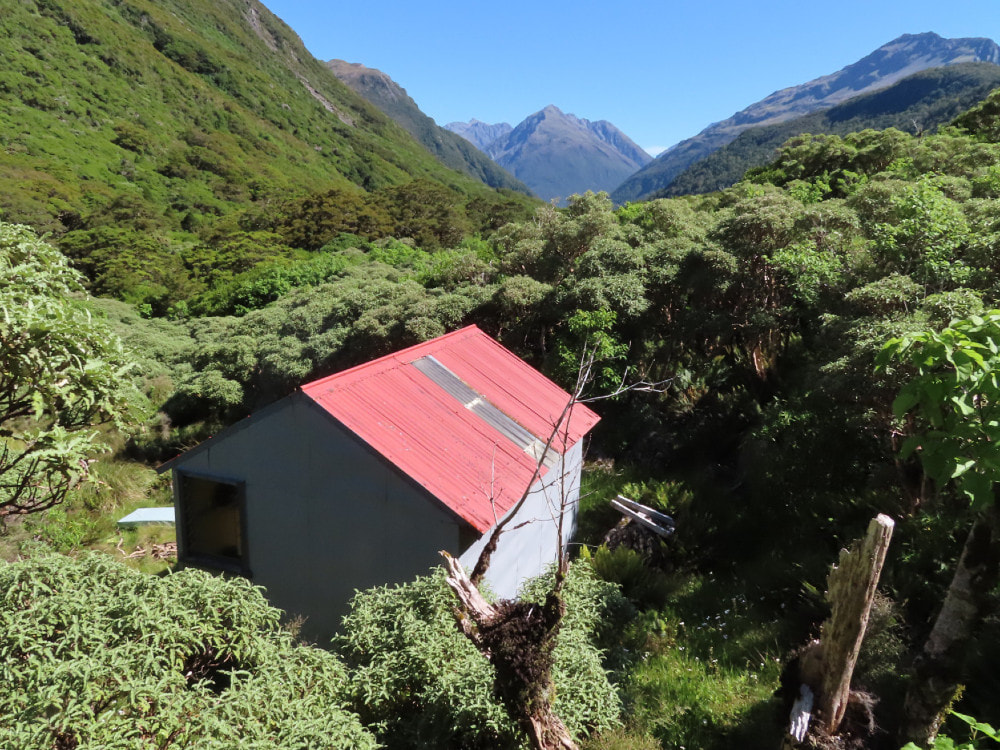 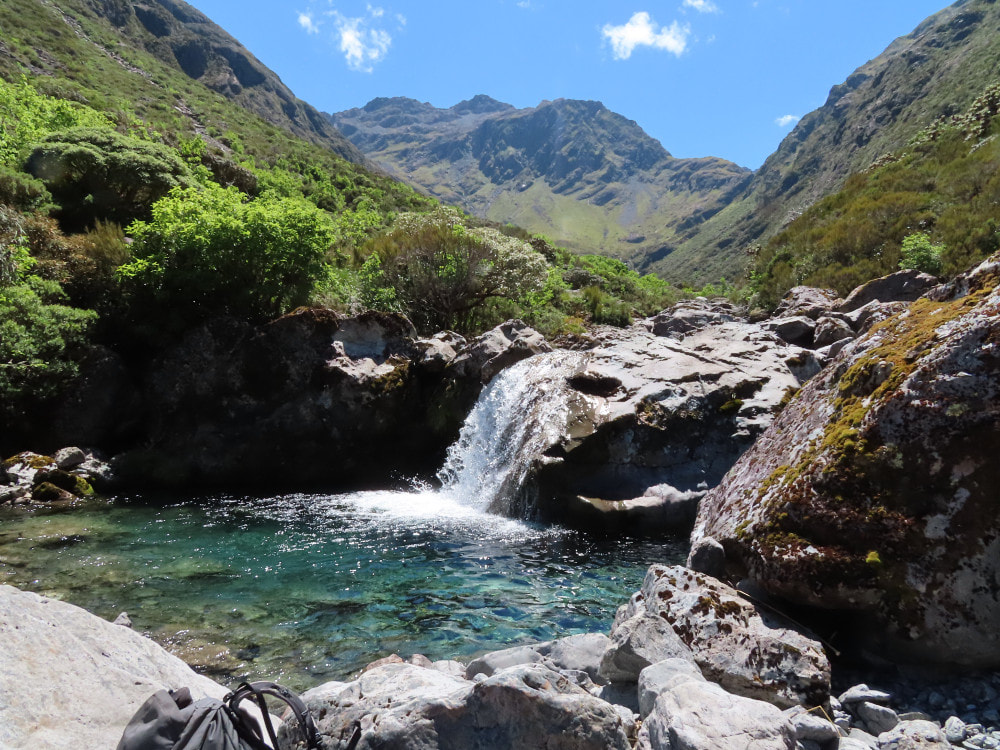 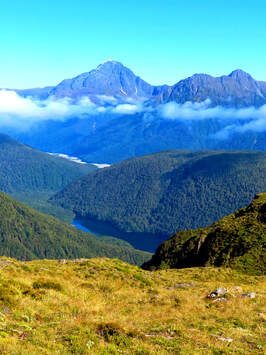 Looking from Koropuku tops over Lake Kaurapataka to Mt. Alexander: Photo Andrew Buglass 2021)
Maintenance Status
Koropuku (Big Tops) Hut was designated in 2004 as minimal maintenance. The most commonly used access route is via a tops track from the lower Otehake River. Frank King and Honora Renwick of Christchurch have a maintain-by-community arrangement with DOC and  have kept the track open and in good condition over the years. DOC Hokitika have put in a new toilet, and did some maintenance on the Hut and cut and sprayed the track in 2021 but I'm not sure whether this is a one-off or not.

Location
Otehake River. GPS Ref: E1496539/ N5259305 (BV21 965 593). Map BV21. Altitude 845m. Koropuku Hut is located in Arthur's Pass National Park, in the upper basin of Koropuku Creek. The Koropuku flows into the Otehake River, which is a tributary of the Taramakau River. Koropuku Hut and its main access route were adopted way back and maintained by Frank King and Honora Renwick of Christchurch after they noticed the Hut and route deteriorating. The Department did do some maintenance in 2002 and again in 2021, but volunteer input will likely remain crucial to the Hut's longer-term preservation. Koropuku Hut has historically been low-use, receiving 6-10 visits per year, although in recent times this has increased somewhat with it being profiled on this and other backcountry websites, and blogs. The Koropuku valley is charming and picturesque and quite spectacular in its upper reaches. Deer and chamois are regularly encountered in the area and on rare occasions Kiwi have been seen or heard near the Hut.

Access
Access to Koropuku Hut is up the Taramakau valley from Aickens Corner on State Highway 73. Fords of the Otira and Otehake rivers are necessary, neither of which is worth messing with when rain causes them to rise above normal flows. so good weather window is essential and a few days extra provisions in case you need to wait for levels to drop. From the car park at Aickens Corner follow the markers along the paddock fenceline, then through a gate to the Otira River. The best crossing currently is a couple of hundred metres upstream from here where the River braids. Cross and head due east across a gorse island to the track start which is marked by a large orange triangle. If the Otira is unfordable there is a flood track down its TR from the Deception Footbridge. This adds a good hour to the trip and if the Otira is running high, the Otehake will most likely be as well.

Follow the track from the Otira confluence along the bush fringes on the TL of the Taramakau to where it comes out onto an old 4WD trail. This is followed to Pfeifer Creek which is usually dry bed where it enters the Taramakau. A track enters the bush on the TR about 500m up the creekbed continues up to Lake Creek. It follows the TL of Lake Creek and around the southern edge of the Lake through some magnificent 40m high stands of Red Beech. When the top of the Lake is reached you turn left at the turnoff on the low bush saddle and drop down a steep face into the Otehake riverbed. This bit is getting quite overgrown and needs a good trim.

The track to Koropuku Hut starts on the bank opposite to where the Kaurapataka track hits the River, the entrance marked by a large orange triangle. The River is relatively easy to ford at normal flows, but rapidly becomes uncrossable when levels rise. The track follows a long spur up to the tussock line and is marked mostly with red permolat. The top end passes through some delightful gnarled and mossy silver beech forest. The trail is in good condition, currently. There is no water from the river to the first tarn at the 1160m contour. There are great views from above the bushline of Lake Kaurapataka and Mts. Alexander and Pfeifer.

The route across the tops is marked with cairns and follows a bench across an old rockfield towards point 1259m where there is a large tarn. Continue South from here along this bench to the top of a prominent gully at GPS: E1495714/ N5259420. Drop down the gully passing a prominent rock outcrop at 1160m on its TR side and onto a steep scree. The gully becomes a creek which is followed to the top of a series of waterfalls where track enters the bush on the TL and drops down a steep gut before rejoining the creek. The track exits the the TL of the creek further down and follows it downhill to around 850m. It veers upriver here, climb/ sidling along the TR faces of the Koropuku. The valley section could do with a few more markers closer to the Hut. Allow 8-10 hours to reach Koropuku Hut from Aitkens corner.

Note: A few folk have had problems locating the top entrance of the track down into the Otehake. An obvious looking line is not the right one. Instead of dropping down to the last tarn at 1150m, you need to climb up to the spur on its TL via an easily missed track. The route to the bushline drops off this spur, with the entrance marked with a large orange triangle.

Type
Koropuku Hut is a standard S81 4-bunk design built in March 1964 by Ray Forsyth, D. Green, and W. Johnson of of the NZFS. It is lined, was painted, and had a small porch over the door added in 2002. In 2004 DOC erected a new long drop toilet, and replaced the clearlight in the roof. There is a nice lush front lawn with room for up to three tents, and a small fireplace behind the Hut against the side of a large boulder. Water comes from small stream between the toilet and the Creek.

Condition
​Koropuku Hut is still in reasonably sound condition. The piles are untreated, and not concreted in, but are in good shape. The sub-floor is in good shape as well. The SW corner of the Hut has had a short section of a bearer and two or three floorboards replaced. The floor at base of west wall shows signs of water getting in, but there is no visible damage. In 2021 there were some small damp patches on the floor abutting the wall below each of the windows. The bottom frame on the side window has a small hole that has rotted right through. The paint on the frames and sills of both windows is flaking badly. The exterior iron cladding and roof iron have patches of red algae developing. In 2021 DOC replaced the toilet door and the lead heads on the hut roof with hex screws. They cleared the helipad, increasing its area back to the original dimensions, doubling what it was. They have continued cutting, poisoning and marking the route from the bushline at the top of the NZFS track right to the Hut. Frank King gave the phone a good clean in early 2022 and Callum Margetts restrung the guitar in April.

Routes
There a quite popular route from the head of the Koropuku valley over to Townsend Hut in the Taramakau. This forms a nice three day loop of moderate difficulty from the Aitkens Corner. It is marked on the map in Frank King's tramping blog: tramping.typepad.com. The Creek is followed initially and is reasonably good travel albeit with the obligatory bit of relatively easy boulder gymnastics. The Creek forks at the 970m contour and a line is followed up the tussock faces between the two forks to around 1100m. A beeline is then made in a NE direction towards the lip of the upper Koropuku basin, sidling back into the Creek at around the 1280m contour. is followed Continue up the Creek then some steep screes to the col between points 1681m and 1750m. Drop into the basin below on the Taramakau side and sidle at roughly the 1400m contour around the northern spur of point 1686m. This takes you into the basin under the North face of Mt. Koeti from where you drop/ sidle due North to gain the broad spur directly above point 1183m. Head down through a band of patchy alpine scrub to the point, then follow the lip of the fault scarp from here to the Hut. Allow 4-5 hours for the crossing from Koropuku to Townsend Hut in good conditions. Good visibility is crucial if travelling without GPS, and ice axes should be carried during the colder months.

When doing the crossing from the Townsend side it is easy to miss the exit from Koropuku Creek up to the Hut. The track entrance at GPS REF: E1496599/N5259271 is not always obvious, as the cairns are often washed away. The track crosses a small stream and passes the toilet on the way up to the Hut. You know you've gone too far downstream when the Koropuku begins to drop into a gorge.

When the Koropuku is low it is possible to travel down through its gorge into the Otehake. There are some waterfalls that must be negotiated and it is pretty slow going in places. Probably more fun in high summer. More detailed route notes can be found on www.tramper.co.nz.

Access is also possible over Koropuku tops down to the head of the Poulter valley. A traverse of Mt. McRae looks feasible up the side creek just upstream of the Hut on the TL. Access down into the Poulter is from the low point between point 1710m and Mt. McRae, and a passage can be found through the scrub via a dry gut that comes in a couple of hundred metres upstream of Poulter Biv.

Kiwi Hut in the lower Taramakau is accessed from the start of the Koropuku track in the Otehake. Boulderhop downriver from here to the Taramakau, and cross where practicable upstream of the Otehake to pick up the 4WD track upstream of Jacksons Creek. The Kiwi Hut turn-off is marked with a large routered sign. There is a track through a patch of beech, then a big grassy clearing to cross to get to the low terrace where the Hut is located. It takes around an hour and a half from the bottom end of the Koropuku tack to Kiwi Hut. This is a fine weather route, obviously.

Repairs Needed
The Hut needs a leak check done during rain, and sealing if necessary. The louvre windows are often a source of moisture and in the longer term could be replaced with double glazed single pane awning windows. This could be done when the frame repairs are done on the wall window. Unfortunately the wooden spoon (Scotland!) has vanished. Would the person that removed it please make amends.
​
Provisions on Site
A bow saw, three billies (two lids), an aluminum wash basin, three buckets, two bench seats, two seats made from wooden crates and sacking, a small kitchen table, an old first aid kit and manual, a plastic brush and shovel, 2 hearth brushes and shovels, a Forest Service food bin, an axe plus spare handle, a broom plus spare handle, a spade, a slasher, a flat file, a rasping file, a large shovel handle, a makeshift ladder, one spare pane of louvre glass, half a roll of malthoid, rat poison, a handful of white permolat markers, a wall-mounted can opener, a small wall-mounted mirror, a four-slice toasting rack for the fire, a cheese grater, an egg beater, a wooden spoon, a game of tiddlywinks, a small library, and a guitar. The Spark modem is not wired up properly. Under the Hut there is some spare iron and roof flashings, a sheet of clearlight, five lengths of decking timber (two of 100 x 50 H3), and various offcuts.
Powered by