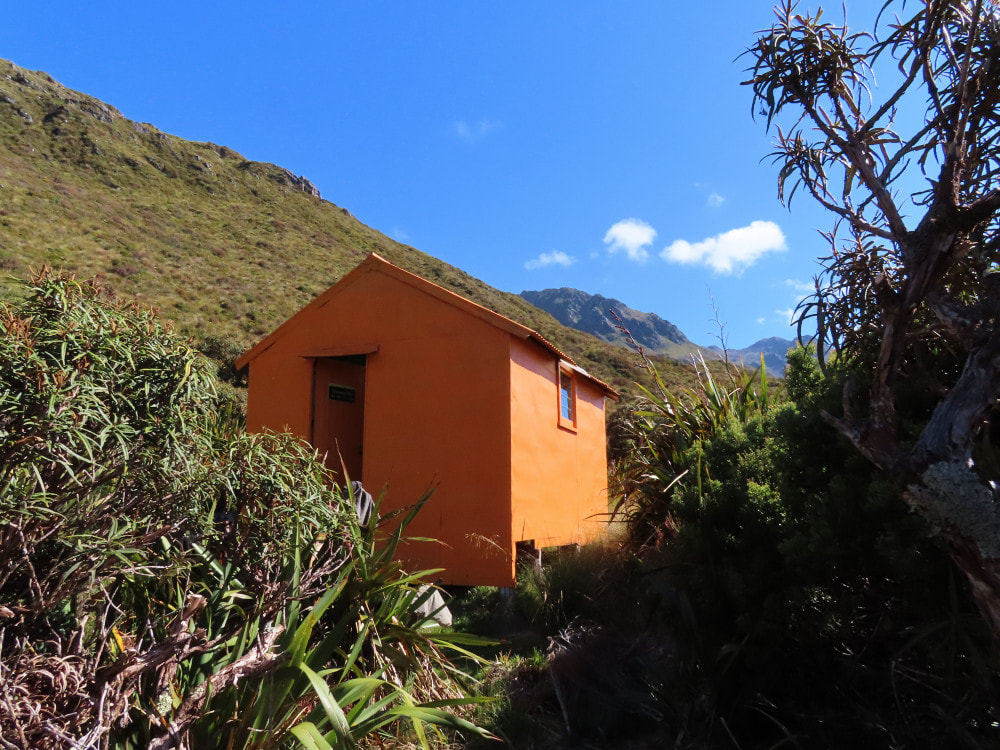 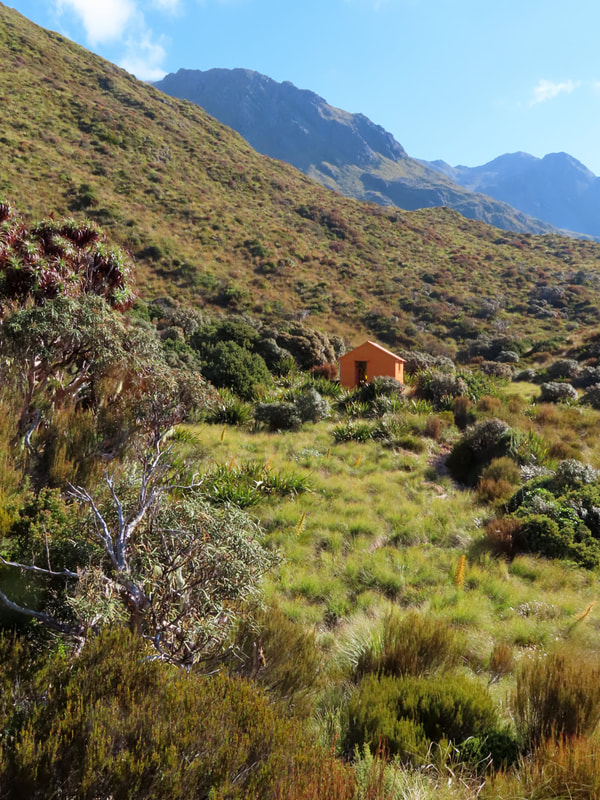 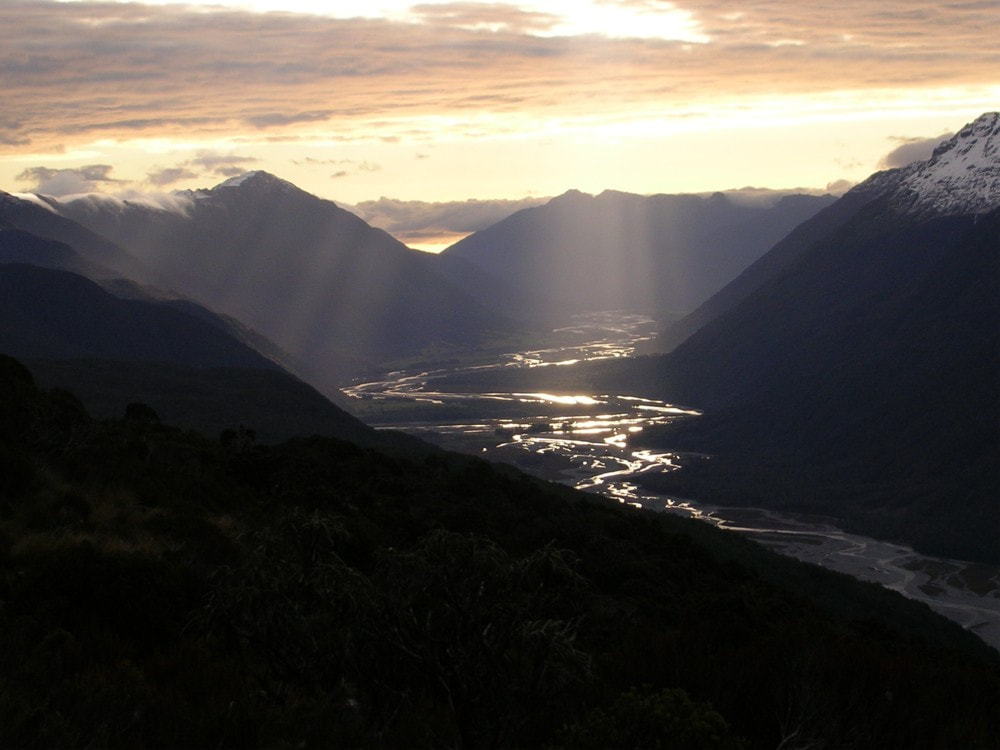 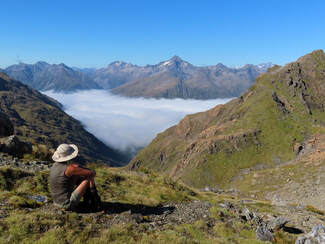 Looking into the head of the Koropuku from the Mt. Koeti tops - Photo Andrew Buglass 2021
Maintenance Status
Townsend Hut is a maintain-by-community project by Graeme Jackson of Hokitika. He was granted some BCT funding a while back to undertake minor repairs and repaint it and recently acquired a second grant to do some re-piling. The access track will also be maintained by Graeme and other hut users.

Location
Taramakau River. GPS Ref: E1499999/ N5263540 (BU21 000 635). Map BU21. Altitude 1145m. Townsend Hut is located in an old fault scarp near the scrubline on the TL of the Taramakau valley. There are open tussock patches and small tarns close by, and great views down the Taramakau from the lip of the scarp. Townsend Hut was built by the NZFS in 1963 and maintained by APNP up until 2007 when DOC Hokitika took over the role, however the first lot of volunteer input was as early as 1995. Townsend Hut averages around 25 visits per year a mix of overnighters and those doing longer tops crossings from the Poulter and Koropuku valleys. Chamois are regularly encountered on the surrounding open tops and Kiwi are regularly heard in the vicinity.

Access
The most direct approach to Townsend Hut is up the Taramakau valley from Aickens Corner on State Highway 73. Fords of the Otira, and Taramakau are necessary and also the Otehake if folk choose to continue up the TL of the valley. None of these rivers are worth messing with when rain causes them to rise above normal flows so pick a good weather window or otherwise carry extra provisions in case you need to wait it out a day or two. From the car park at Aickens Corner follow the markers along the paddock fenceline, then through a gate to the Otira River. The best crossing currently is a couple of hundred metres upstream where the River braids. Head due east across a low gorse island and pick up the track which is marked by a large orange triangle. If the Otira is unfordable there is a flood track down the TR from the Deception Footbridge adding a good hour to the trip. Those heading upvalley may want to reconsider their options if the Otira is running high because the Taramakau and Otehake will be as well.
Follow the track from the Otira junction along the bush fringes on the TL of the Taramakau to where it comes out onto an old 4WD trail. This is followed past the Lake Kaurapataka turnoff (100m before Pfeifer Creek) and ends abruptly at the River's edge. The Taramakau can be forded diagonally here (there are normally a number of braids that make fording easier) and the TR followed. Staying on the TL isn't problematic, however a 15 minute bush bash is required around 2km above Pfeifer Creek where the River has cut in on a bend. Further up the Otehake needs to be crossed and currently it runs swiftly in a single channel at the confluence. You may need to head upstream a bit to where it widens and flattens somewhat. A short distance above the confluence poles lead diagonally across the braids of the Taramakau.

Continue up the TR past the Kiwi Hut turnoff to Michael Creek, then cross to the TL of the Taramakau. The route up to Townsend Hut commences at a large orange triangle on the TL fan of the unnamed creek 400m upriver from Michael Creek at GPS REF: E1499016/ N5265136. Markers lead up through the rocks, regrowth and dead spars to the creek bed which is followed up past a small fork on the TR. At around 520m (GPS Ref: E1499387/ N5264622) the track proper exits and climbs steeply up the bush faces onto a narrow ridge. It follows this up through the sub-alpine zone to the lip of the scarp on which the Hut is located. The last stretch along the scarp is through scrub and open tussock with small tarns. The tracked sections up to the Hut are in pretty good condition currently. John Roper-Lindsay and Dan Murphy did some trimming and marking on the lower bits in July 2020 and I worked on the final approaches to the Hut in November. It takes 4-5 hours for the trip up from the roadend currently.

It is unclear whether the APNP policy prohibiting commercial helicopter flights applies to Townsend Hut. A clearing has been cleared for landings 20m in front of the Hut, but this may just be for maintenance purposes.

Type
Townsend Hut is a standard NZFS S81, 4-bunk design, built in 1962. It was lined and had a small donated roof-fed water tank installed by volunteers in 1995. Water can also be obtained from the small tarns a short distance down the scarp. The end louvre window was replaced by a double-glazed one in 2007. There is no toilet.

Condition
Townsend Hut is dry, sound, and in very good condition currently. It has a sunny north-facing aspect and is raised well above the ground, making it less prone to snow seepage around the floor plates in winter. The piles appear to be original and untreated, and are not concreted in. A couple are getting a bit dozy, and the middle pile on the eastern side of the Hut has started to lean a bit. The floor at the South end of the Hut is noticeably concave, but still firm underfoot. The bearers and joists appear to be in excellent condition. Graeme repainted the Hut in 2018 and did some sealing work however the wood panelling above the lower door flashing still has a couple of small gaps which may let water in during strong wind and rain.

Routes
The most popular tops crossing to Townsend is from the Minchin valley via Minchin Pass. From Minchin Biv it is a straightforward amble up to Minchin Pass, then up the the ridge on the southern side of Waterfall Creek basin. It is necessary to traverse points 1461m, 1526m, 1638m and 1731m and drop from point 1731m down towards point 1183m. Don't drop directly down to Townsend Hut, which visible from the Divide in fine conditions, as there is a band of alpine scrub on the face just above it. From point 1183m follow the lip of the fault scarp down to the Hut. Allow 4-5 hours in good conditions for the crossing from Minchin Biv.

A crossing from the Poulter valley is possible over the unnamed col between Mt. Koeti and point 1686m. From Poulter Biv follow the upper Poulter River to its head and climb directly to the col. This is a simple scree climb in late summer and autumn, but during the colder months the snow near the top of the col gets icy and ice axes are necessary. Drop from the col into the basin under the North face of Mt. Koeti and sidle at roughly the 1300m contour to where it is possible to drop directly down to point 1183m. From here follow the lip of the scarp down to the Hut. Allow 4-5 hours for the crossing in good conditions.

There is also a reasonably popular tops traverse of moderate difficulty between Townsend Hut and Koropuku Hut that forms part of a three day loop from Aickens Corner. From the Hut head up the lip of the fault scarp to point 1183m, cross a small gully and climb/ sidle up from here and around the North basin of Mt. Koeti aiming to hit the northern spur of point 1686m at just under the 1400m mark. Sidle around the spur at around this level into the next basin and climb up towards the col between points 1681m and 1750m. Drop from here into the top basin of the Koropuku. Sidle out of the basin on the TR at around the 1280m contour and drop down the tussock faces between the Koropuku and the first big side-creek on the TR. Follow the Koropuku down from the junction of this side-stream. The track entrance to the Hut at GPS REF: E1496599/N5259271 is not always obvious, as the cairns are often washed away. The track crosses a small stream and passes the toilet on the way up to the Hut. You know you've gone too far downstream when the Koropuku begins to drop into a gorge. Allow 4-5 hours in good conditions for the crossing from Townsend. Iceaxes should be carried when there is snow cover on the tops sections.

Repairs
Aside from the pile replacement and floor levelling, Townsend Hut would benefit from having a toilet. The track could also do with a bit more trimming in a few places.

Provisions On Site
Four billies, one billy lid, two frypans, two bench seats, two small tables, an old first-aid kit, a shovel, a small folding pruning saw, loppers, a saw, a broom, five spare glass louvre panes and one perspex one, a wall-mounted map of APNP, and five sheets of wall ply that are wedged between the bunk and the East wall. Under the Hut there is some spare iron cladding, some timber odds and sodds (including a bit of tongue and groove), some old sheets of clearlight, a makeshift wooden ladder, and a coil of No. 8 wire. Graeme's paint and paint gear including a sealant gun.
Powered by