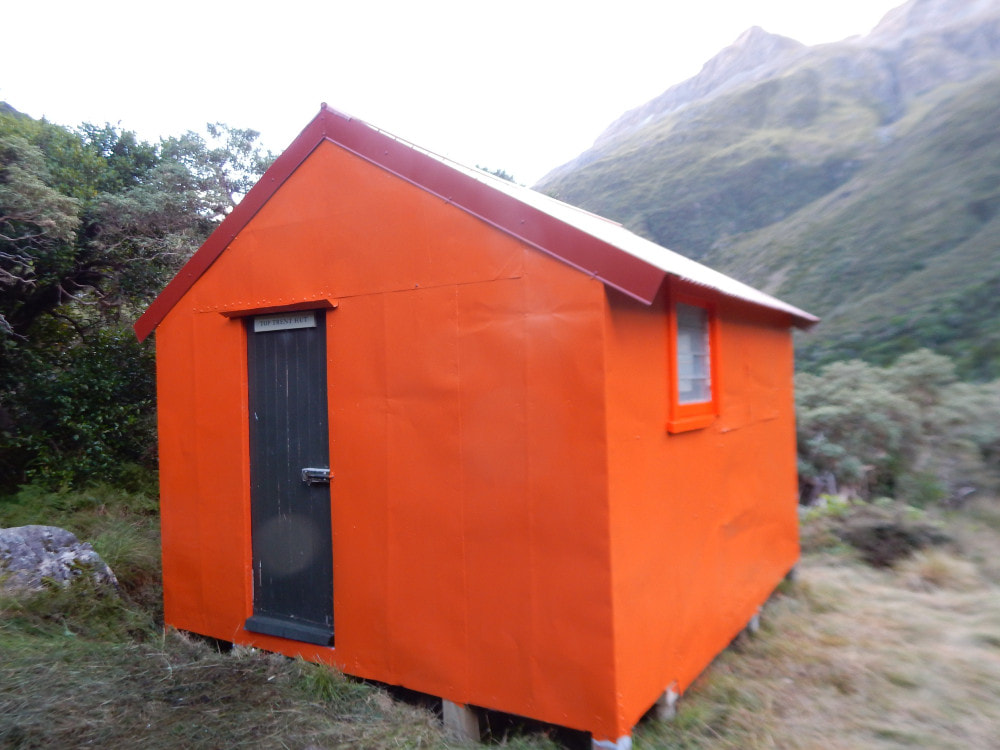 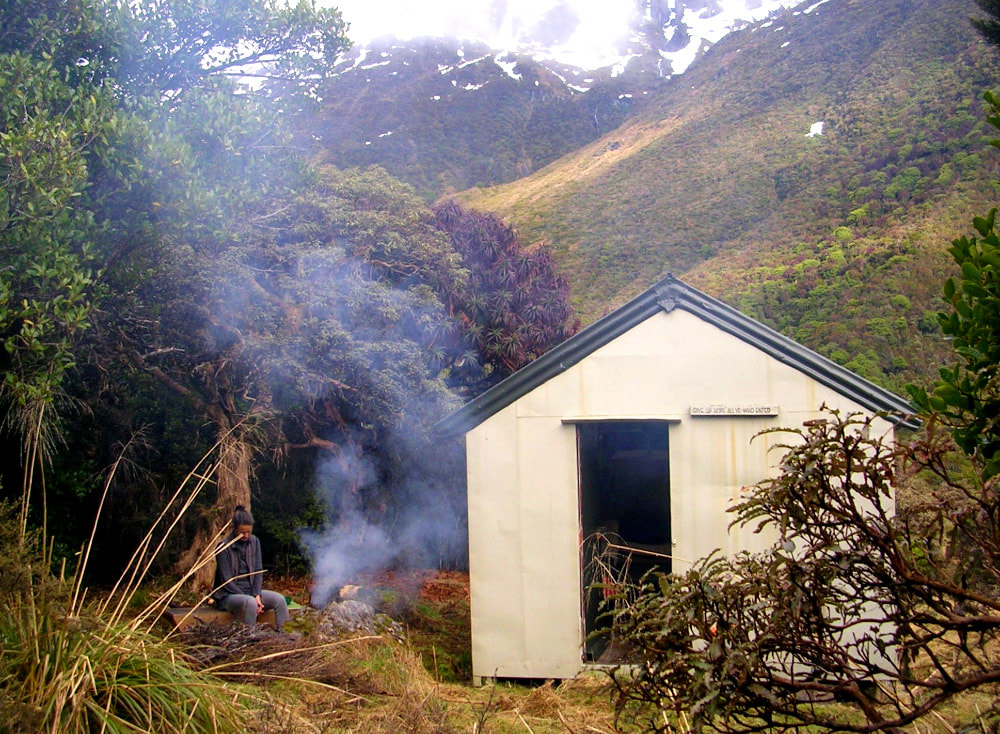 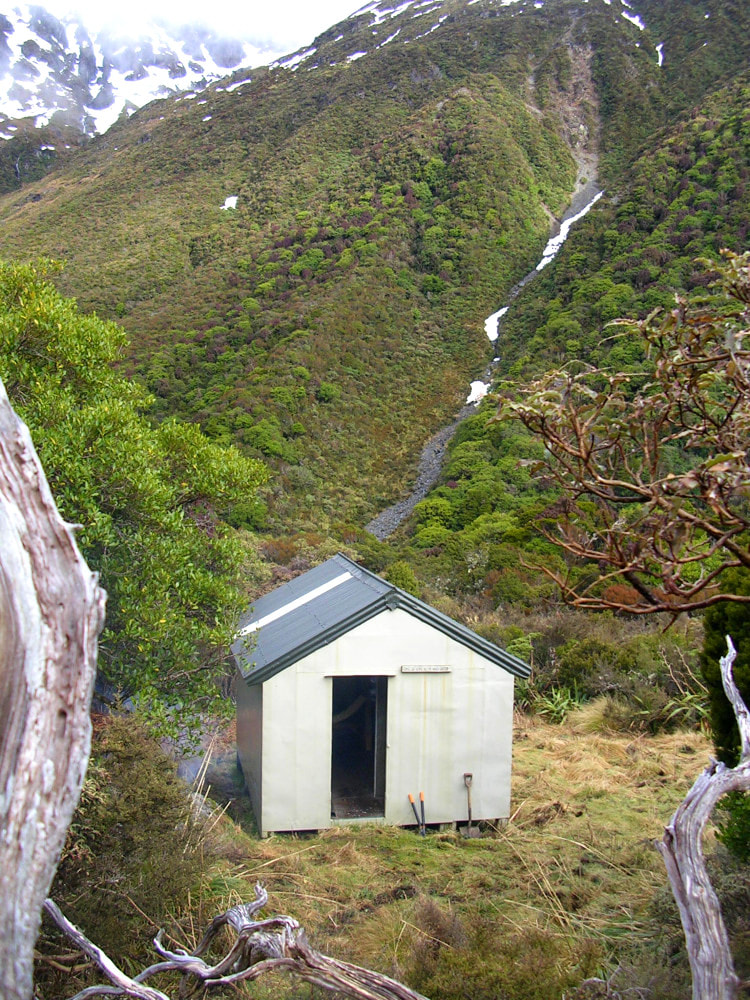 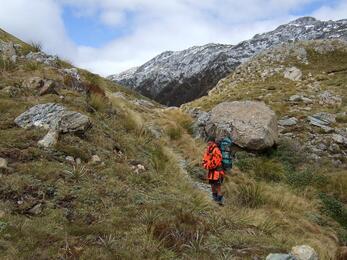 The Haupiri side of Trent Saddle: Photo Glenn Johnston 2010
Maintenance Status
Top Trent Hut is designated as minimal maintenance. The the tracked and poled route to it over Trent Saddle from the Haupiri valley should still be fully maintained by DOC. Access up the Trent valley from Mid Trent Hut is untracked, aside from a short section up from the River to Top Trent Hut. Paul Reid of Permolat and some friends carried out a major working bee at the Hut in September 2015, with some High-Country Consortium funding. DOC kindly backloaded the materials in for the project. He went back in there in April 2017 to finish off the repairs.

Location
Ahaura Catchment. Grid Ref: NZTM2000 E1504410/ N5271863 (BU21 044 719). Topo Map BU21. Altitude 865m. Top Trent Hut is located in the head of the Trent River, which is a tributary of the Ahaura. The Hut is on the TR of the valley just above a large shallow tarn, probably the "Lagoon" from which it derives its name. Kiwi can be heard calling around the tarn on dark and there is a fair bit of deer sign in the locality. Chamois are often encountered here on the tops. The bush around the Hut is montane forest with a lot of big old broadleaf, mountain holly, pink pine and pahautea (mountain cedar). There is a tiny patch of beech just above the western end of the tarn. The Hut is surrounded by the tall picturesque peaks of Mt. Dixon and Wilson to the South and Mt. Elizabeth and Monotis to the North and the area has a remote feel to it. The Top Trent hutbook goes back to 1992 and averaged around three entries per year for 20 years, a ratio of one fly-in to two foot parties. Visits have increased since Paul's first work parties.

Access
Top Trent Hut is most commonly accessed from the Haupiri valley over Trent Saddle, and can be done fairly comfortably in a day from the Haupiri roadend. The Haupiri route starts at the end of Heaphy Road which crosses Gloriavale Christian Community land and permission is required from them to do this. Gloriavale are very happy to grant access and have provided a car parking area at E1495872/ N5281765 (BU21 959 818) which is DOC signposted. They are not keen on allowing cars to continue along the farm track to O'Shanessy Creek (a 20 minute walk). This last section is fairly rough with numerous small fords, but is still OK for 2WD. A high-axle 4WD might get you another kilometre upvalley through some pine plantations. The lower Haupiri is easy travel, mostly grassy flats with a few short sections of boulderhopping. The River can be crossed and recrossed. Cone Creek can be a bit tricky to cross and wouldn't be fordable after heavy rain. There is a concreted-in hot pool 50m up the Haupiri track from the Cone Creek confluence. The track continues up the TL of the Haupiri to Elizabeth Hut, around three hours from O'Shannesy Flat.

From Elizabeth Hut the track crosses the TR branch of the Haupiri and climb/ sidles up into the head of the TL branch. The track crosses to the TL of the Haupiri in the sub-alpine zone and snow-poles and cairns mark the route above the scrubline. From Trent Saddle the route drops into the upper TL basin of Trent, then climbs up around two small gorgy sections which are poled and disked through the alpine scrub. This bit is getting a little overgrown in places. The track drops back into the River and crosses to the TR at E1503658 N5271675, and sidles for a kilometre through the montane forest to the tarn and Hut. Allow three hours from Elizabeth Hut to Top Trent Hut. The tracked section from Elizabeth Hut to Trent Saddle was recut by DOC in 2018. 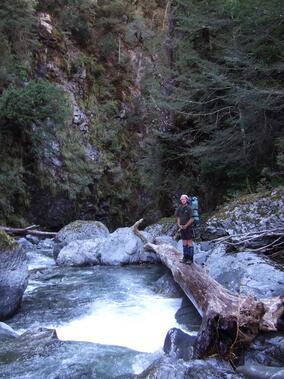 The Trent Gorge: Photo Glenn Johnston 2010
The route to Top Trent Hut from Mid Trent Hut is directly up the River. Access to the lower Trent valley is via the Tutaekuri valley and Waikiti Downs. Permission to cross the farmland there is from the Farm Manager Terry who lives in the cottage, not the main house; Ph 03 738 0599. The farm road gates weren't locked at last report and it's no problem for access for trampers or hunters, despite what the gate signs say. There has however been some conflict recently between the Farm owner and DOC. It is open river travel up to Mid Trent Hut and from here up through the Trent Gorge is fine-weather-only. The route is untracked, apart from a short section providing access up from the river to Top Trent Hut. The Gorge section is enjoyable, but involves at least fifty crossings and river edge wading through a series of tight little gorges. From the Waikiti Downs parking area to Tutaekuri Junction allow 2.5 hours, from Tutaekuri junction to Mid Trent three hours, and 4-5 hours from Mid to Top Trent.

There is space for a helicopter to land near the big tarn.

Type
Top Trent is an NZFS S81, four-bunk design with open fire, built in 1960. Peter Robins recalls walking up there to replace a rusting fireplace around 1965, however the open fire was removed at some point. The bunks were wire netting on wooden frames with mattresses. The Hut is lined and there is a narrow sky light. There is no toilet and water is from a small creek 30m up the Mt. Dixon tops track.

Condition
DOC repainted Top Trent Hut inside and out in 2003 and dug a drain across the grass area in front of the door. Some bracing was placed between the piles and bearers and one pile was replaced with a block. The working bee in 2015 replaced rotting piles, bearers, framing, and the skylight. The flat iron walls were securely reattached using screws and sealed. The tracks from Trent Saddle, up from the River to the Hut, and the Mt. Dixon tops track were recut and marked. The April 2017 work involved more framing replacement, and floor repairs, and replacement of the roof and ridging. Loose clouts on the exterior were removed and replaced with hex screws, and the Hut was repainted. The tracks in the immediate vicinity of the Hut were cleared of over-hanging branches DOC have been in recently and replaced the mattresses and put new bunk slats in. They also replaced the hut book which has taken away a bit of useful history contained in the old one.

Routes
An old NZFS track onto the Mt. Dixon tops starts at the door of the Hut. and provides very quick access to the tussock. It was recut and marked by Permolat people in 2015. in good condition. It sidles downriver across the terrace initially, then veers up the spur on the TL of the first side-creek downstream from the Hut. It follows the spur all the way up to the tussock, emerging in the open around 1140m contour. The gradient flattens briefly on a section of ridge with three snow stakes and a few small tarns. The track peters out after the third snow stake at the bottom of a 100 vertical-metre band of low alpine scrub. This is reasonably easy to push through, with the odd open tussock patch. Once in the open tussock travel is easy and straightforward up onto the crest of the Range. There are some   cairns in the tussock leading down towards the top of the track.

There are a number possible crossings into the head of the Trent from the Taramakau Valley, including one described by Frank King up the spur on the TL of Dixon Creek. A fairly well-defined deer trail leads through the bush to the open tops opposite No. 4 Hut, and from here it is an easy traverse over points 1585m and 1600m and down the tops track to the Top Trent Hut. The range is also traversable right along to Trent Saddle. Frank says most of reasonably defined leading spurs in this area are worth checking out as routes.

There is a high saddle into the Waikiti from the head the big side-creek 800m upriver from Top Trent. The creek has three waterfalls in its lower and mid portions that can be avoided by climbing up the tussock faces on the TL. On the Waikiti side a watercourse that drains directly from the saddle can be followed initially. Further down there are a lot of boulder cascades that require the odd bit of jumping and sliding down. The rough sections carry on for a surprisingly long way down the valley. Lower down some of them can be bypassed using deer trails. A recent party took 10 hours to get from Top Trent to Waikiti Hut.

Repairs needed
Nothing at last report. A toilet would be a good addition at some point. The old roof iron was stacked under the Hut, along with a good piece of corrugated polycarbonate skylight sheeting. This would be useful for a toilet and/or woodshed should someone wish to build them. Some tidying up of the tracks in the upper Trent would be useful.

Provisions On Site
Two wooden stools, a galvanised bucket, a plastic wash basin, an aluminium wash basin, two candle holders, a broom, a shovel, a hearth brush and shovel, a small table, a fixed bench, a supply of black polythene, a camp oven, a biscuit tin of nails, a first aid kit, an egg beater, two frypans, three billies with lids, a tin opener, and an egg slice. There are three, short, square, treated piles under the Hut, and a wooden ladder.
Powered by