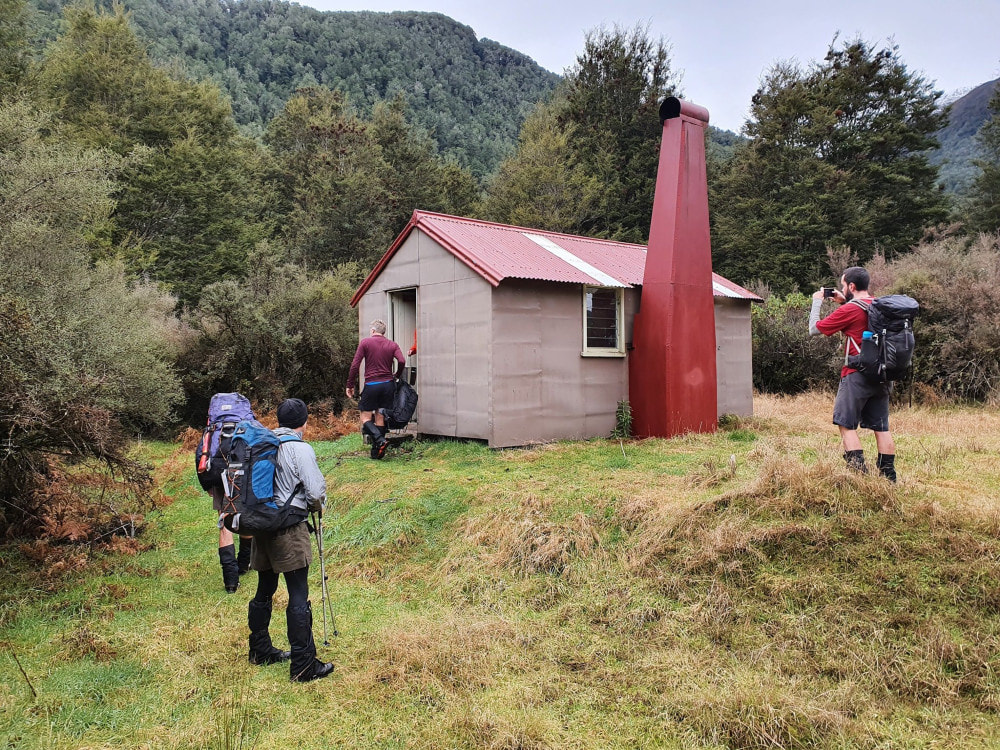 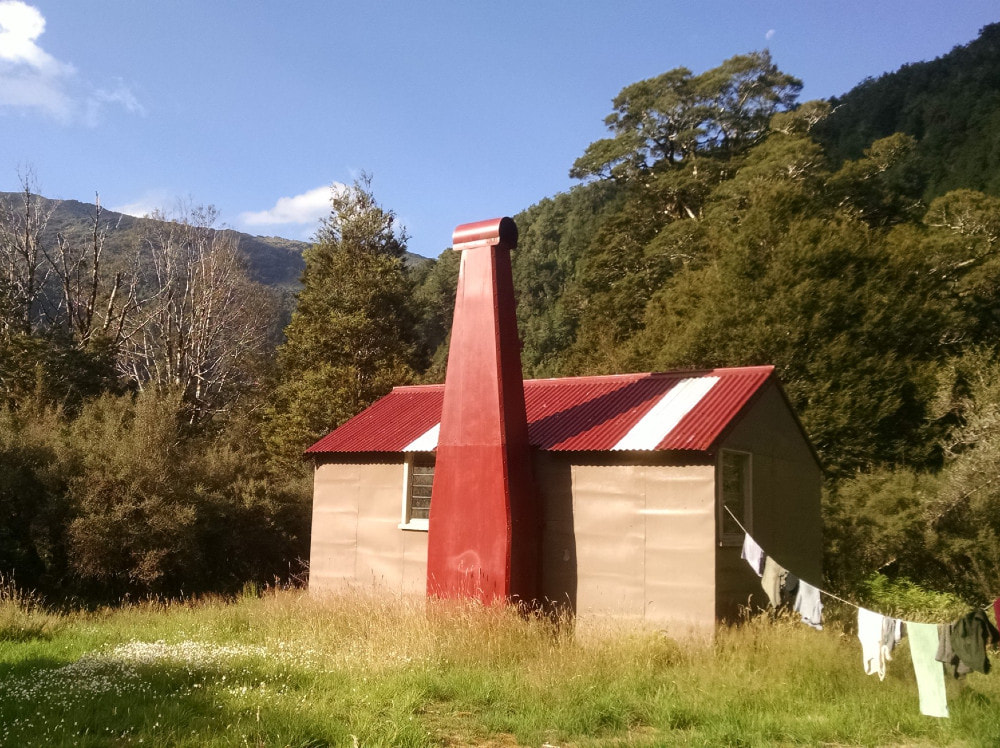 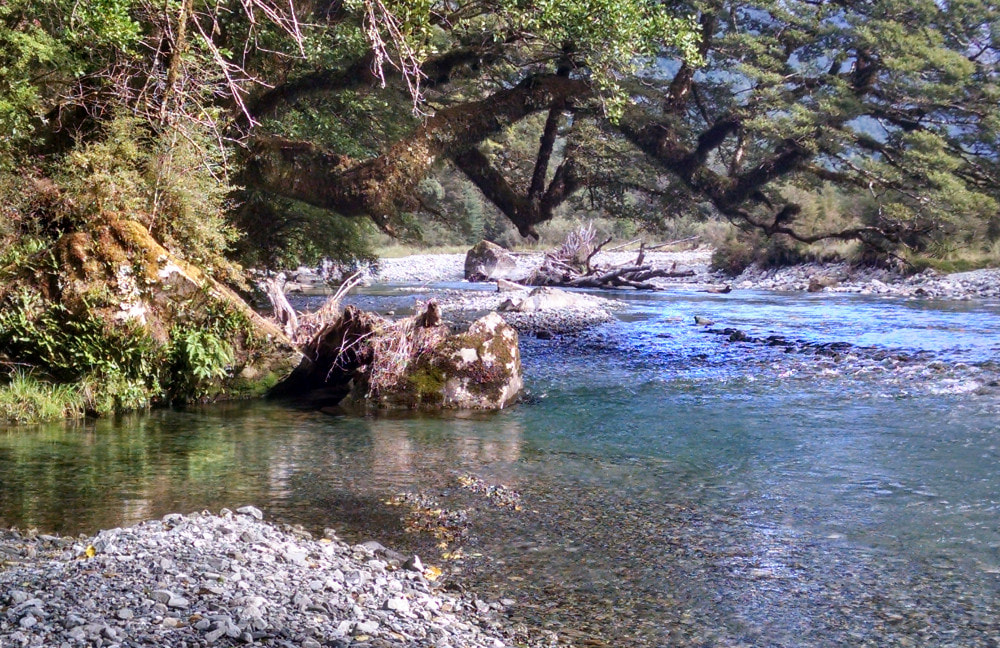 Maintenance Status
DOC made a decision in 2004 to seek a maintain-by-community agreement for Waikiti Hut. Craig Benbow of Permolat put up his hand and intends doing a project there in 2022. In 2019 Charlie Ledbrook and a group of Permolat and OFTC members recut the track up to the Hut. This was funded by the Back Country Trust. DOC did some anchor replacements on the swingbridge in the mid-valley but then due to funding constraints reneged  on a full safety upgrade. To avert it being pulled it out BCT has offered to come to the rescue. If they do, it'll be the first swingbridge work that they've funded. Early 2021 saw trackwork carried out on the Crane Creek/ Rochfort Basin route into the Waikiti by Mauricio Lloreda and friends. This was funded with some leftover Outdoor Recreation Consortium monies that BCT granted us in 2019. Mauricio went back in early November to finish of the section from the tops down Logjam Creek to the Waikiti basin.

​Location
Ahaura catchment. Ref:NZTM2000 E1506000/ N5281370 (BU21 060 814). Topo50 Map BU21. Altitude 445m. Waikiti Hut is located on a flat midway up the TR of the Waikiti River, which is a major tributary of the Ahaura River. Prior to the trackwork in 2009 the Hut was receiving extremely low numbers of walk-in visitors, and had largely become the preserve of fly-in hunters. Recent parties have remarked on the abundance of Kaka in the valley, and here is a healthy Robin population also.

Access
Access up the Waikiti valley starts from the road bridge on the TR of the River. The DOC sign states seven hours, but it can be much quicker by a fit party. The track was chainsawed to the swingbridge by DOC in 2009 and abundantly marked with orange triangles throughout its length. Charlie and his team have done a thorough job of bringing it up to standard along its entire length. They also installed a ladder on a section exposed rock in one of the side-creeks. The track starts on the TR at the bridge on the Haupiri-Amuri Road. It climbs up and around a gorge for the first couple of hours before dropping back to the River. It crosses a swingbridge and continues up the TL, climbing initially to get around a second gorgy section. This is a rough bit with a couple of active slips. There is a short, uncharacteristically flat section after the climb followed by a couple of annoying, undulating, and probably unnecessary climbs to reach the top flat where the Hut is located. It is easier and much quicker at normal or low flows to follow the River from the big unnamed side-creek at top of the flat section. Cross where necessary and ford back to the TR below the Hut, usually easy at normal river flows. Allow around 5-6 hours currently from the roadend to the Hut.

The overgrowing flats provide helicopters access, and there was once an airstrip here.

Type
Waikiti Hut is an NZFS six-bunk S70 design with an open fireplace, built in the 1960’s. The toilet is 50m back down from the Hut. There is water 30m from the Hut.

Condition
DOC painted it in 2005, reconditioned it in 2009 and did some trackwork in 2009, and have recently been in again and repainted the Hut. The fire hearth is in good condition and the flume is well constructed so as to avoid back drafts and smoky fires. The internal iron hearth surround is past its best-by date. There is plenty of dead wood in the vicinity of the Hut and water from a small creek 100m away. There is an NZFS food bin in the Hut for food storage that low-IQ, fly-in and other types have been known to use for a rubbish bin. Please take your garbage out with you. Mauricio's team cleaned the mould of the mattresses when they did the November trackwork. 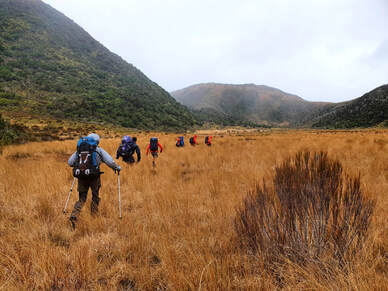 Heading up Rochfort Basin - Photo Liz Wightwick 2021
Routes
There is an alternative route into the Waikiti valley up Crane Creek to Rochfort Basin, then over a low saddle into Logjam Creek. The tracked bits on this route had deteriorated considerably from the early 2000's when Mauricio Lloreda of Permolat started taking an interest in it and trimmed and re-marked parts of it. In January 2021 Mauricio flew a crew into the basin to do some comprehensive work in the upper half of Crane Creek. The BCT provided funding for this. The lower valley section was finished off on foot from the Haupiri road end in February and the last bit from the Rochfort tops down into the Waikiti in November.

The track starts in the shingle pit on the TR of Crane Creek 50m up from the bridge. It follows the Creek up initially crossing A number of times before swinging hard left and climbing steeply up onto sloping bush terrace on the TR. It climbs more gradually from here to around the 500m contour, then sidles through a series of gullies back into the creek. Then track climbs from the conspicuous ninety-degree corner and sidles high for a bit before dropping back into the riverbed. It continues upriver to an old fly camp site, then crosses to the TL and heads up through a trench to the South of the little hill at the edge the Rochfort Basin. The least swampy passage around the basin is on the North side past the old hut site. A trail with waratahs leads from the head of the basin to up the left of the saddle into Logjam Creek. Drop down to the Saddle and up onto the knoll with tarn to its SW. The Logjam track starts in patchy scrub 500m from the tarn in a SE direction at E1503582/ N5281463 (BU21 036 815). The track entrance in the Creek at the bottom end is at E1504233/ N5280892 (BU21 042 809). Mauricio also did some work along the bush fringes of the Creek so you don't always have to wade up the middle.

The Waikiti River can usually be forded without problems near the confluence. Allow five hours from the roadend to Rochford and another three from there to Waikiti Hut using this route. Crane Creek Hut in Rochfort Basin, marked on the older topo maps, burned down some years back.

It is also possible to access the Trent valley from the Waikiti over an unnamed saddle ESE of Waitiki Hut. The start of the creek that drains the saddle on the Waikiti side is wrongly marked on the map. It actually turns North when it hits the valley floor and enters the River downstream from the Hut. The route up to the saddle is mainly via this creek with the odd detour on the TL. Thick red beech logs, fern and lawyer slow progress around the 700m contour, but further up some good deer trails 20 to 40m above the stream can be followed. Allow four hours from the Hut to the saddle. Duncan Hamilton recommends an alternative route that may be easier. It involves heading upvalley one kilometre from Waikiti Hut, climbing through the bush to the 800m contour, and sidling at this height around to the saddle. The spur leading from the saddle down into the Trent is good open travel at the top and reportedly steep and horrible lower down. Once in the Trent riverbed, there are a number of crossings required on the way down to the Tutaekuri River. Allow a full day's walk to reach Waikiti Hut from either Tutaekuri or Mid Trent Hut.

A saddle in the head of the Waikiti provides access over to Top Trent Hut. The upper Waikiti is negotiable but has numerous rough and bouldery bits. Some of the lower ones can be bypassed using deer trails however further up there is a fair amount of scrambling required. The descent on the Trent side is down the broad spur on the TL of the creek that drains the saddle. The creek itself has three waterfalls in it, and should be avoided. Fording the Trent River at the bottom of the descent is OK at normal flows, and it's about 15 minutes from here down the track on the TR to the Hut. A recent party took 10 hours to do the reverse trip from Top Trent to Waikiti Hut. 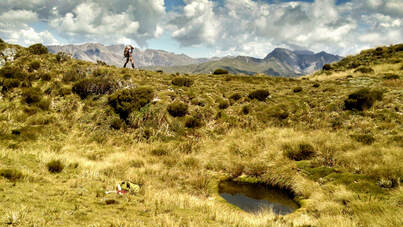 Mt. Newcombe tops - Photo Andrew Buglass 2018
An alternative route out of the valley via the Mt. Newcombe tops is doable, but a bit of a mixed bag. The tops are great, easy walking and can be accessed from the top of the Logjam Creek track in a couple of hours. They are adequately sprinkled with tarns and good campsites. The descent from the end of the range down to point 406m and the road ain't that flash. It is steep and rough underfoot, and there is an extended alpine scrub zone, (looks like it's been burnt off some time way back) followed by beech forest with a very thick understory. There is the very occasional open bit, then a nice band of supplejack just before you hit the valley floor. It would be a fairly big day in good conditions getting out this way from Waikiti Hut.

Another tops route worth considering is up Logjamb Creek and over Mt. Mason to the Haupiri valley. A section of ridge 1.5km East of Mt. Mason drops into the alpine scrub zone and is best sidled at the 980 metre contour on the South side. There is no easy way through around 120 lineal metres of some very dense stuff here. An old tops track which used to lead from Mt. Mason down to the Haupiri River has seen better days. There is several hundred metres of quite tall Dracopyllum to pass through in order to find the track's top entrance marked with a permolat T. The spur is broad here and the start could be easily missed. Remain on the centre of the spur to the beginning of the taller scrub canopy at around 1000m. Simon, Mauricio and Peter Alspach did a bit of trimming and marking on this section in 2018 and the line is still quite easy to follow. From around 850m to 650m the route is obliterated by windfall and regrowth. Below 650m the ridge becomes better defined and the old trackline is followable, albeit steep and slippery, until about 500m. The 2018 team cruise-taped from 600m to the valley floor in 2018 avoiding the old trackline at the bottom end due to windfall. Allow a full day for the traverse from the Waikiti and take a tent if you are coming up from the Haupiri side.

Repairs
Craig plans to replace the hearth surround in May 2022. Some of the regrowth on some of the slips en route to the Hut is coming coming back and may need tidying. Overall though the track was still in good nick in December 2020. If someone wants to take some cleaning product in for the mattresses to keep on top of mouild, it would be appreciated.