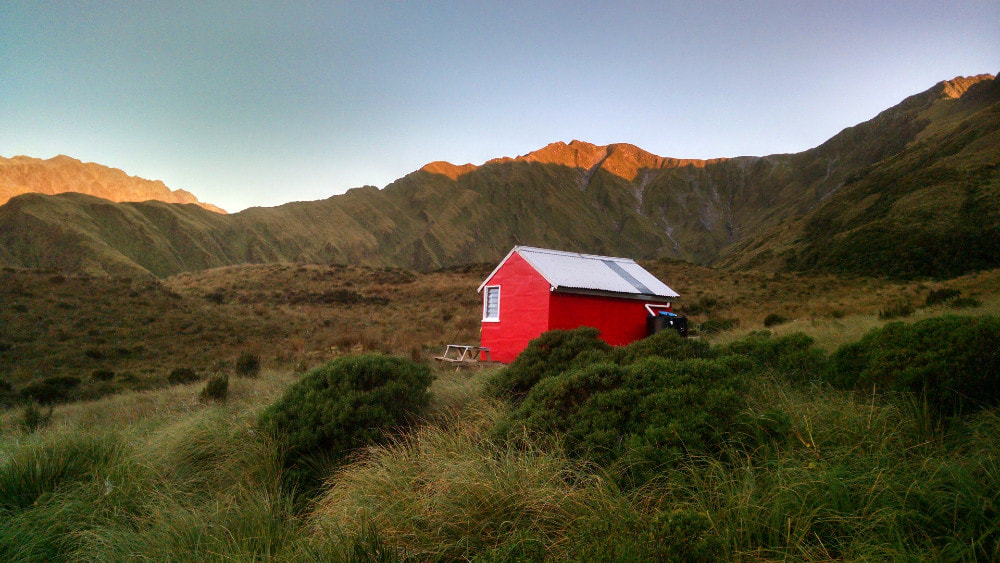 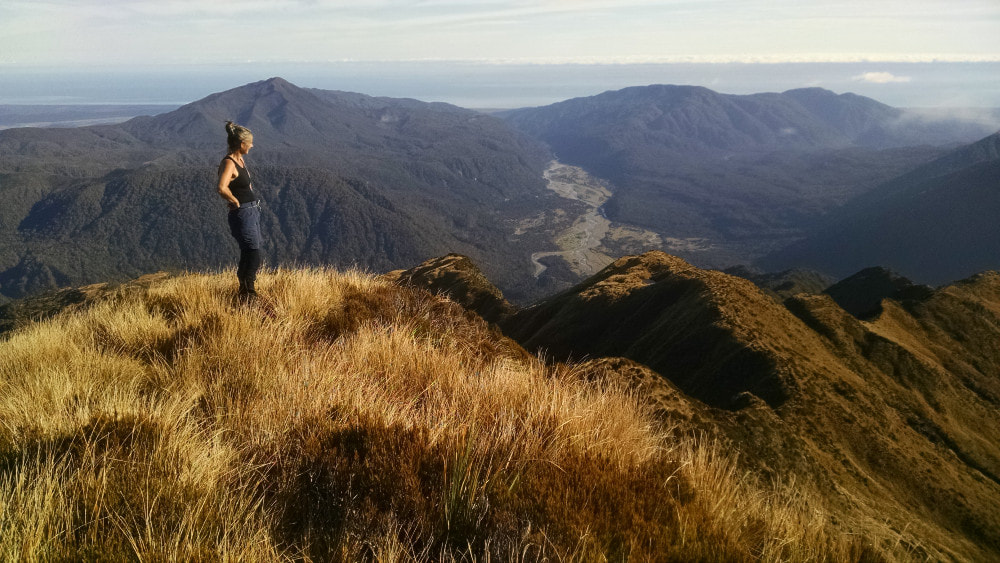 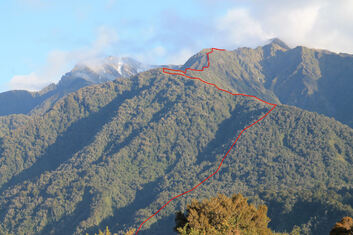 Healy trackline
Maintenance status
Healey Creek Hut was minimally maintained by DOC up until 2004, then that kind of stopped. DOC gave up maintaining the access track a considerable time before that and both hut and track are now volunteer maintained. The Hut was extremely well built back in 1968, and although structurally sound had started to move sideways on its piles, and the roof was beginning to rust. Tom Hayes, a Christchurch Permolat member, put his hand up for the project, secured some Back Country Trust funding and flew a team in in April 2018 to repile and re-roof the Hut and install a water tank. Wet weather prevented completion of the piling and external painting and a second visit was made in 2019 to do this. Weather again prevented the completion of painting which wasn't done until March 2020. The access track was recut and marked in 2018. In 2022 a toilet was installed as part of a DOC/ volunteer collaboration.

Location
Mikonui catchment. Map BV18. Grid Ref: E1429870/ N5231505 (BV18 299 315). Altitude 1170m. Healey Hut is located on a tussock bench high above the TL of Healey Creek with fabulous views out over the frontal ranges to the Tasman Sea. It can be reached in a day from the Mikonui roadend and is an access point for Galena Ridge and some great alpine crossings to the Whitcombe, Tuke and Waitaha catchments. There are fernbird and kea in the locality and the former, although shy, are curious and will eventually come and check you out if you sit still for long enough.

Access
Access from SH6 to the Mikonui valley is along a long gravel road up the Totara River valley and over a low bush saddle. The road has taken a hammering from multiple extreme weather events and is no longer advisable for 2WD. It's a 3km stroll over paddocks and river flats from the roadend to Mikonui Flat Hut, which has six bunks and a woodburner. The Mikonui needs to be forded but this is not problematic at normal flows. From Mikonui Flat Hut it's a 20 minute walk up the river flats on the TL to the start of the Healey Creek track which starts on the bush edge about 100m upriver from a conspicuous shingle fan. It goes up a steep rib onto a terrace between two small side-creeks. From here there is a steep climb up the bush faces onto Healey Spur. The Spur flattens somewhat in the sub-alpine zone and and a series of steps and humps are followed to where the track emerges in the tussock on a flat section of ridge just above 1200m. Snow poles lead from here down the tussock faces in a SE direction to the bench where the Hut is located. The track was recut and re-marked in June 2018 and is still in good condition. A bit of trimming was done in the sub-alpine zone in 2022. A moderately fit party should be able to reach it Healey Hut from the roadend in 4.5-5.5 hours currently.

Type
Healey Creek Hut is a standard NZFS, 4-bunk S81 design (no. 306) built in April 1968. It was lined internally in the early 80's. A roof fed watertank was installed in April 2018. There is cellphone reception from the Hut, although the signal is not a strong one. 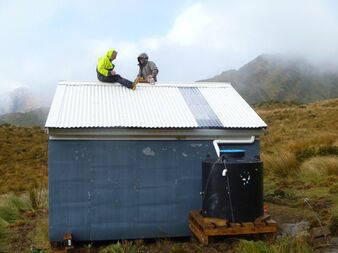 Healey reroofing 2018
Condition
Healy Creek Hut is in good condition. It was painted, resealed, and provided with new fireproof mattresses by DOC during the summer of 2003/4. In April 2018 Tom's party (Tom, John Milne, Geoff Spearpoint, Jane Morris, Reece Bowen and myself) re-roofed the Hut and installed the watertank. Two of the piles were replaced and drains dug around the Hut. The window frames were scraped and primed, and a door handle added to supplement the bolt. Snow poles were placed from the Hut up the tussock faces to the top end of the track. In April 2019 Tom went back in with a small team and finished the piling, primed the Hut and commenced painting until the rain stopped them. The Hut tie-downs were tightened, and we finished painting the Hut exterior. In 2022 Tom Hayes and friends installed a new toilet built by the DOC Hokitika carpenters. The project was BCT funded.

Routes
To access Galena Ridge it is necessary to climb back up onto Healey Spur from the Hut. What looks to be a more direct and straightforward sidle up the tussock faces on the Healey Creek side of the Spur is blocked by a deep slot just East of the Hut and another further up. Instead follow the waratahs up through the tussock and scattered scrub from the door of the Hut to the top of the Spur. Continue up to just past point 1643m where there is a narrow exposed section that needs to be traversed with care. The other option is to drop off the Spur at the saddle SE of point 1643m and sidle under the razorback, regaining the Spur at the start of the last steep pitch up onto Galena Ridge. 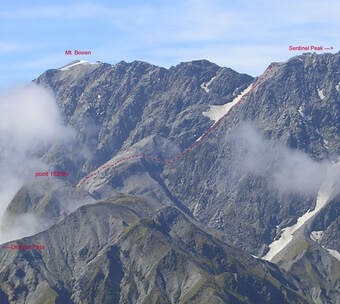 Couloir route up onto Sentinel Peak
A direct traverse East along the crest of the range to Mt. Bowen and Mikonui Spur Biv requires a detour around Remarkable Peak on the Cropp side. From the big flat area south west of summit, drop off down an easy narrow gut beginning at BV18 316 301. Sidle across at 1540m and climb back on to the main ridge up a steepish bit of eroding hillside at BV18 320 301. It's fairly easy to kick footholds in the soft shingly rock to get  back on the main range. From here the travel is good to the 1700m contour NE of point 1625m The least difficult route from here is via a steep couloir that leads up to the col between Mt. Bowen and Sentinel Peak. The gut is accessed by way of a short exposed sidle over a sloping gravel (or snow depending on the season) bench from the main ridge. Head up the gut which has snow all year round and is steep at the top, or cross the gut and climb out onto the rocky rib on its TL. Scramble up this towards Sentinel Peak. Allow a full day for the crossing from Healey Hut to Mikonui Spur Biv. The steeper sections on the Bowen approach will be icy at times during winter and spring, requiring ice axes, crampons, and possibly a rope. 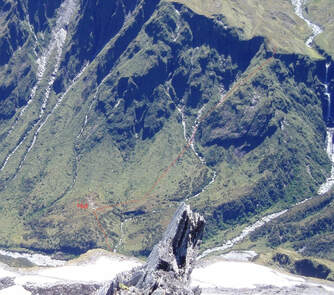 Route down to Top Tuke Hut
Galena Ridge is reasonably a straightforward traverse for most of its length, and Top Tuke, Hut can be accessed down the ridge running W-NW off point 1974m. The ridge bounds the TR of the hanging basin of a large unnamed side-creek. The route from the lip of the basin down to Top Tuke Hut starts at the end of a flat tussock bench on the TR of the waterfall, (around E1428665/ N5227080 (BV18 287 271)). A small notch in the bluffs provides access down onto a spur on the TR of the waterfall. Drop off the spur further down into the creek on its TR and exit it on the TR where it starts to flatten. Continue in a straight line down through patchy scrub to the Hut. The Hut is visible from the lip of the basin in fine conditions.

Further along Galena Ridge between point 1974m and point 2001m there is one exposed notch that requires upclimbing.  A rope may be an option for this.

The views from Mt. Beaumont are superb and it is a easy traverse from here around to the junction with Sawtooth Ridge. Ivory Lake Hut is accessed over point 2084m. There is a short down-climb of around 5m through crumbly rock just before its summit that could be problematic for some without a rope. A couple of sections on the lee sides of points 2084m and 1870m may require crampons during the colder months, however in late summer and autumn the few remaining patches of permanent snow can usually be skirted without the use of snow gear. Access to the Hut is down the spur on the TR of the Lake.

Top Waitaha Hut can be accessed by heading West from point 1870m along a flat bench, then dropping down the SE-running spur to the confluence of Watson and Stag Creeks. It is an easy amble down Stag Creek to the Waitaha River, and from here to the Hut.

The route from Mt. Beaumont down Steadman Brow to Cropp Knob is straightforward apart from a short steep exposed section just above the 1620m contour. This is probably OK to upclimb without protection, but it may be advisable to carry a rope for those heading down. A maintained track provides access down a side-spur that connects with Cropp Brow at a flat area just NE of Cropp Knob. The track is in excellent shape although several parties have had trouble locating the top entrance markers which are a bit further north than where the track is marked on the NZ Topomap. It leads down to the Price Flat swingbridge in the Whitcombe valley, taking around two hours from the scrubline.

A track from Healey Hut down into Healey Creek marked on the older maps hasn't been maintained for well over 40 years. The odd bit of permolat can still be found at the NW end of the bench on which the Hut is sited, but peters out 100m further down. The dense alpine scrub and bluffs below are not encouraging and access into the head of Healy Creek would probably be easier down the side-creek just upriver from the Hut. This appears to be partially blown out further down and may provide access all the way into the Creek.

Repairs needed
The hut needs to be rechecked for leakage in extreme weather and screws added to the ridging and flashings if necessary. Installation of side panels on the porch might be useful in stopping wind driven rain from entering the door egress.

Provisions on Site
A Shovel, a spade, some loppers, a saw, a grubber, a wood splitter, a spare broom handle, some No. 8 wire, two chisels, a hammer, some sealant and a sealant gun, a length of rope, a broom, a paint roller and extension handle, tins of white enamel, exterior primer and red exterior paint, an aluminium basin, a plastic basin, a hearth brush and shovel, two spare louvre panes, three small frypans, two pots, and plastic buckets. There are two wooden benches and two wooden chairs inside and a wooden picnic table outside. Under the hut is an aluminium ladder, a wooden roof ladder, a spare sheet of roofing iron, a length of galvanised spouting and a plastic downpipe.
Powered by