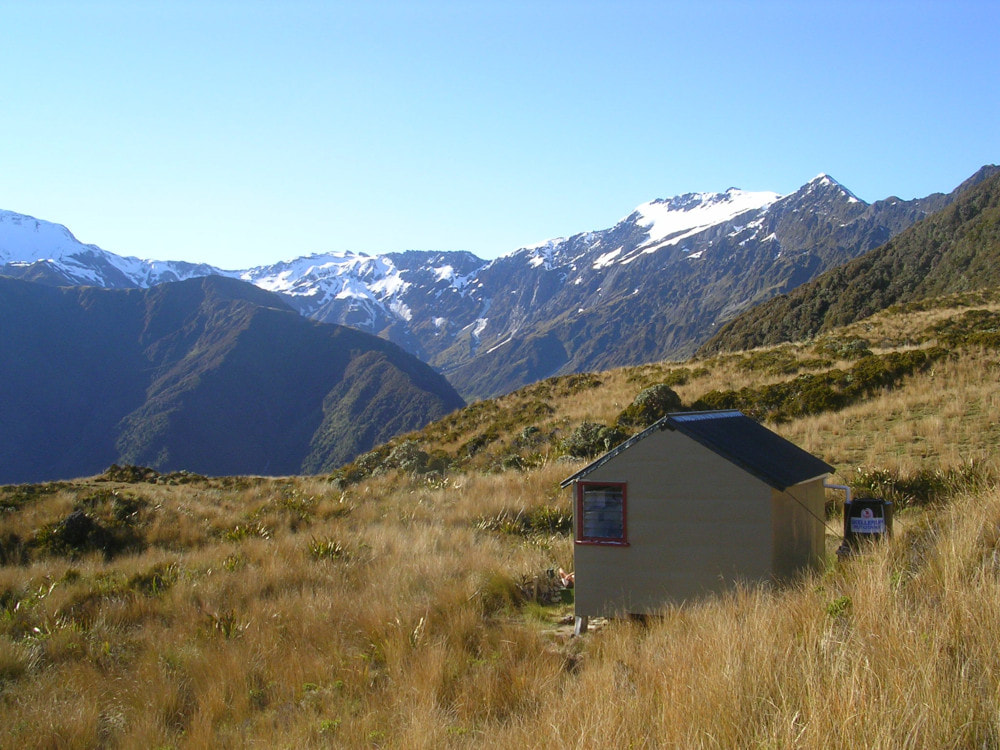 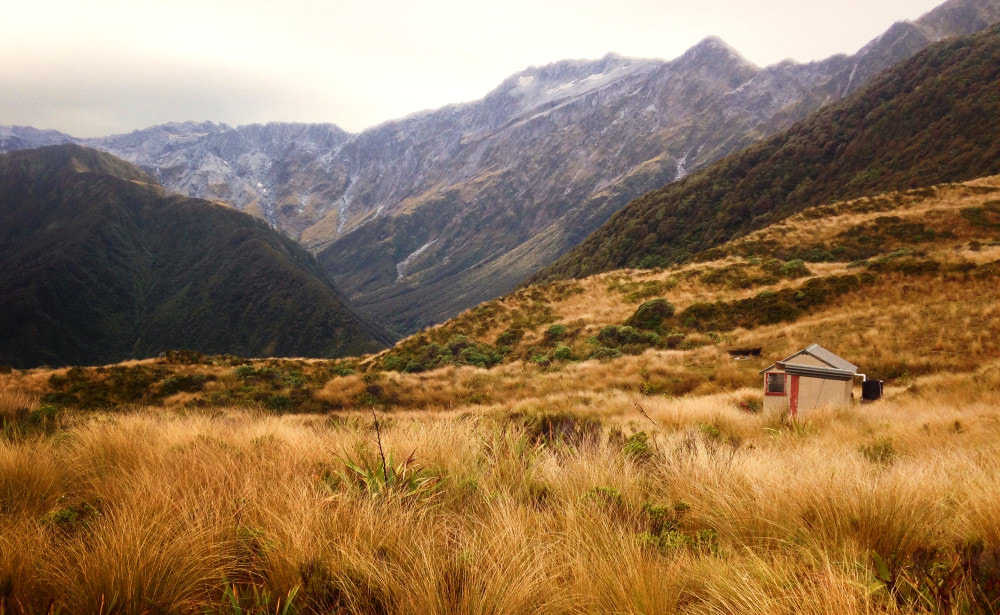 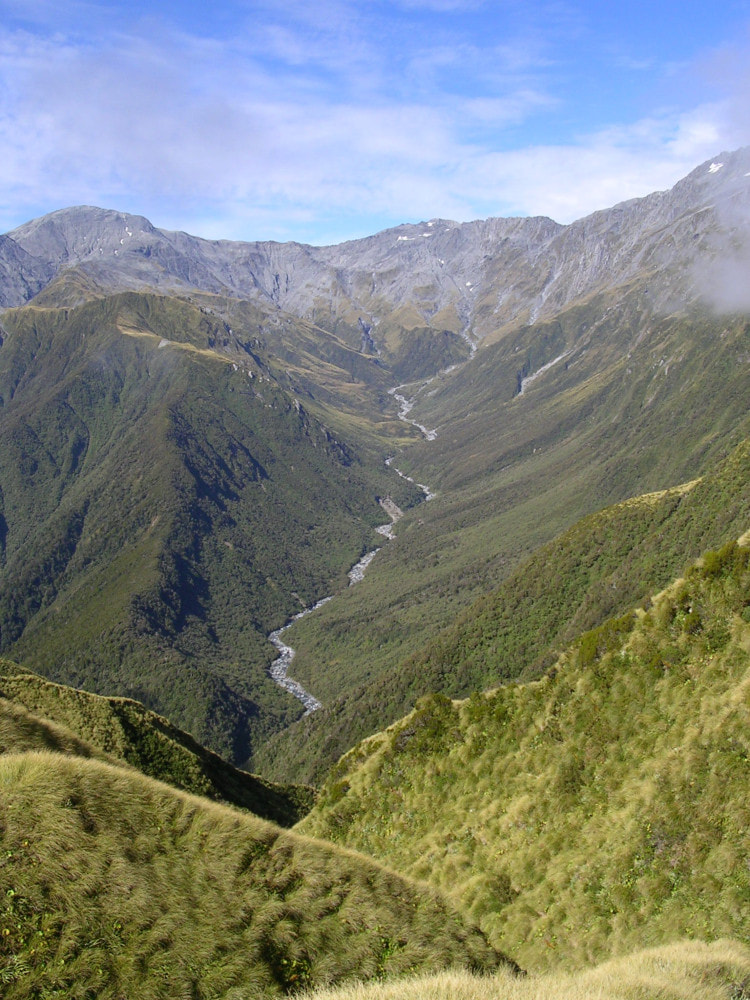 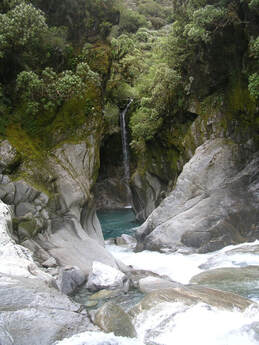 Location
Mikonui catchment. Map BV18. GPS Ref: E1426537/ N5230468 (BV18 265 304). Altitude 1090m. Dickie Spur Hut is located at the northern end of Dickie Ridge high above the Tuke River. There are superb views from the Hut out to the coast and upvalley to Galena Ridge, Mt. Beaumont, Sawtooth Ridge and The Tusk. Dickie Spur is a great overnight tramp that takes 5-6 hours from the Mikonui roadend. It also provides a stopover for those travelling to Top Tuke Hut in the head of the valley, many of whom are continuing on to Ivory Lake Hut in the Waitaha.

Access
The Dickie Spur track from the Mikonui valley was recut by DOC in December 2020. It track starts in scattered scrub 200m SE of Mikonui Flat Hut, enters the bush and climbs steeply over a wedge of terrace into the Tuke River at the top end of the first gorge. A swingbridge takes you to the TL and the track continues upriver to just below Truran Creek. It leaves the River here and climbs steeply up the TL of Truran Creek gaining height in a series of steps to Truran Pass.

The track continues past the Polluck Creek turnoff skirting a large slip in the head of Truran Creek and climbs steeply to around 1000m. The gradient eases somewhat and the ridge is followed in a a series of steps through the sub-alpine zone to a signpost at the 1200m contour(GPS Ref: E1426054/ N5230445). From here waratahs lead down a side-ridge in a NE direction to the tussock bench where the Hut is located. Allow 4-6 hours from Mikonui Flat Hut to Dickie Spur Hut.

Condition
Dickie Spur is in reasonably sound condition, but badly needs a repaint. Rust is showing through on the roof in places and water appears to be getting in above the Hut door somewhere and dripping into the cupboard area. There is a small damp area on the floor in the NW corner, possibly caused by snow build up in Winter. The toilet was shifted not too long ago but the new hole has already filled with water and excrement.

Routes
Top Tuke Hut is accessed by following the waratahs back up onto Dickie Ridge. Continue climbing up and over point 1326m to a dip in the ridge around point 1296m. Poles lead from here down some steep tussock faces into an unnamed creek which is followed down into the valley. On NZ Toopmaps the descent is marked incorrectly on the spur on the TL of the creek. A track exits the creek on the TR around the 800m contour, sidles upvalley for 15 minutes, and drops into the riverbed at the top entrance of the Tuke Gorge. It is mostly river travel on the TL from here although the odd ford to the TR at normal flows will give a better line of travel. The going gets rougher as you get further up and some of the larger boulders can be a challenge to negotiate. DOC have cut and marked bush detours in several places and there is a small gorge 20 minutes below the Hut with a track around its TL. A short section of river travel follows to a opposite small side-creek just upriver from the Hut (E1428172/ N5226869 (BV18 282 269)). Ford here and follow a short section of track from the mouth of the creek onto the terrace where the Hut is. The Hut itself is clearly visible from a number of points on the route. The top ford would not be safe after heavy rain. Allow 3.5-5 hours from Dickie Spur Hut to Top Tuke Hut.

Top Tuke can also be accessed by continuing up Dickie Ridge however there is no time advantage in doing this as the Ridge is a long plod with quite a few ups and downs. There are a couple of exposed sections with rotten rock on the approaches to point 1920m, one of which is marginal without a rope. The terrain below the drop-off point from the low area between point 1920m and The Tusk is steep and bluffy and locating a good line when descending from above may not be easy.

Top Waitaha Hut can be accessed by continuing up Dickie Ridge onto the NW shoulder of The Tusk. The ridge down to Ragged Peak from The Tusk is easy going and Ragged Peak's broad SE spur is used to access the Top Waitaha Basin. Drop off the spur where it is dissected by a smallish branch of Watson Creek around 1360m. A steep rib drops west from a flat bench here down into an unnamed side-creek that enters the Waitaha 100m downstream from the Hut. Drop left off the rib into a steep gut to access the creek bed 100m above where it meets the River. Top Waitaha Hut is visible from a number of points on the descent. Allow a full day for the crossing from Dickie Spur Hut. A full compliment of alpine equipment would need to be carried during the colder months.

Sawtooth Ridge is traversable however it is necessary to sidle North off the Ridge at the low point after point 1957m to get around a rock buttress. Ivory Lake Hut can be accessed over points 2084m and 1870m and down the spur on the TR of the Lake. A short, down-climb of around five metres just before point 2084m is exposed and crumbly in places and icy in winter and could be problematic without a rope. From here on it is reasonably straightforward, although a couple of bits on the lee side of points 2084m and 1870m would possibly require crampons during the colder months. In late summer and autumn this bit can usually be done without an ice axe.

Repairs Needed
Some repainting of the roof, cladding and external wooden bits is overdue. The roof ridging is old and still has lead edging. Replacing this and the leadhead nails with tech screws would probably resolve the leak issue as well as potential kea poisoning. The flathead nails holding the cladding in place could be replaced in the same fashion. The toilet needs shifting to where a hole with decent drainage can be dug.

Provisions on Site
An aluminium washbasin, a hearth shovel and hand broom, a full-sized broom, a pick, a shovel, two bench seats, one spare glass and one perspex louvre pane, and four 3x3 wooden stakes.
Powered by