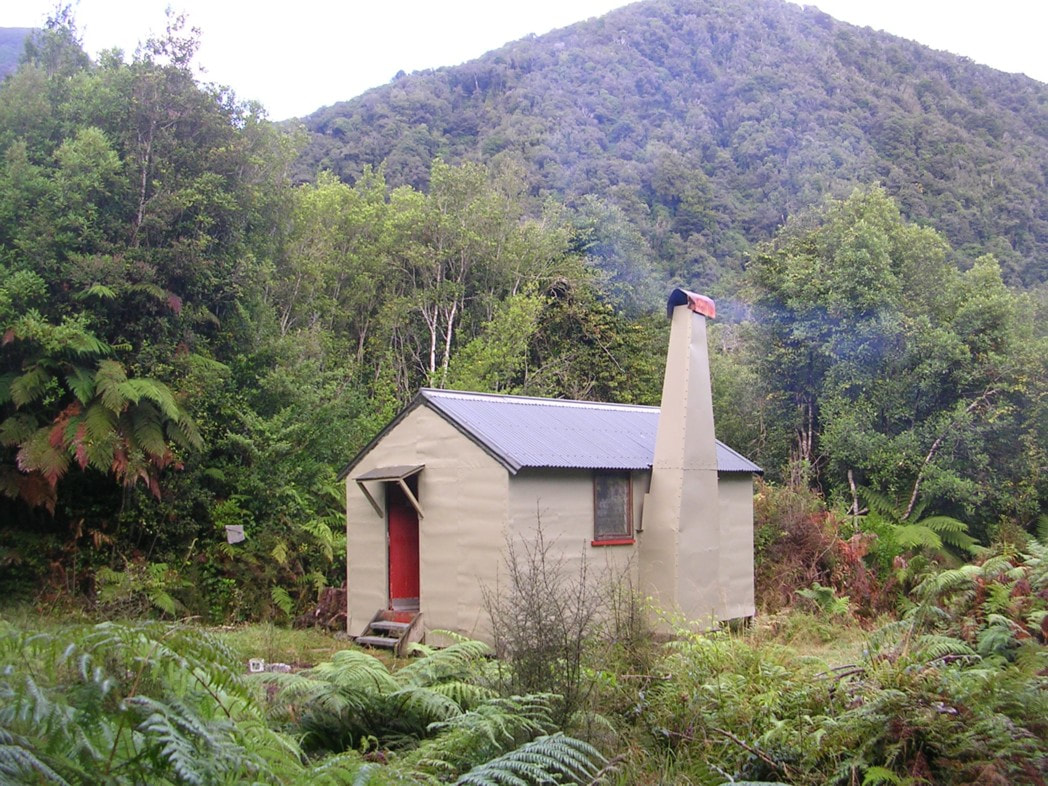 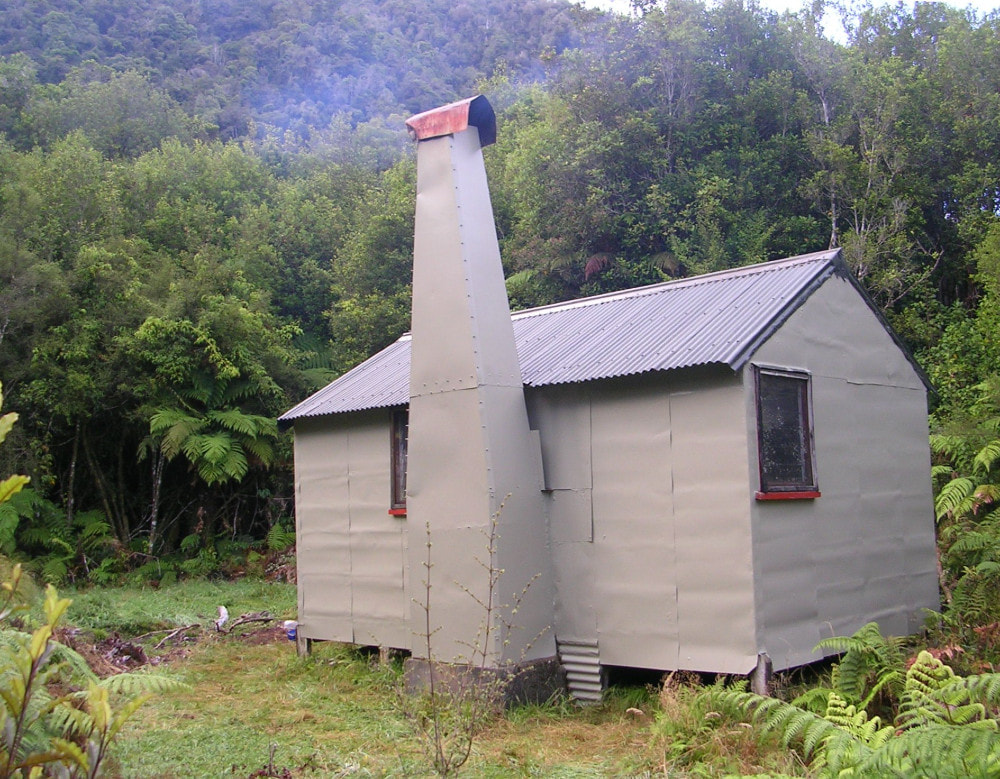 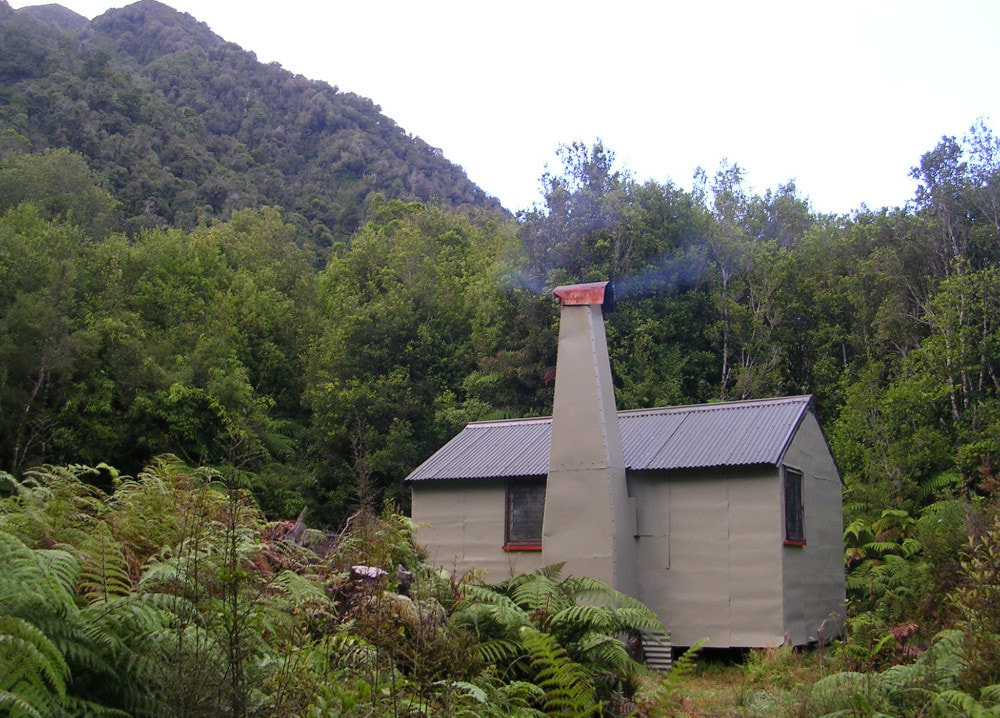 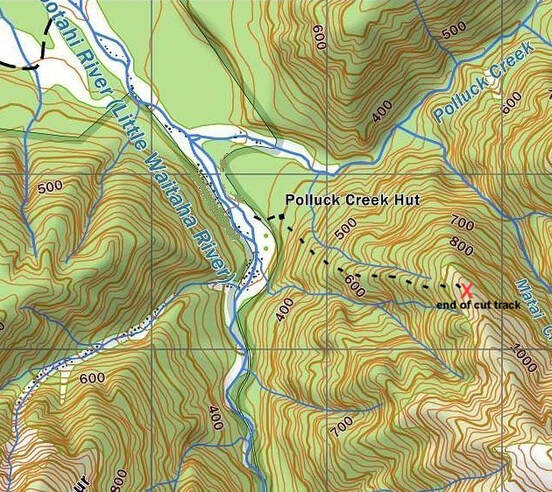 Maintenance status
Polluck Creek Hut, a.k.a. Little Waitaha, Kakapotahi, or Happy Valley Hut, is a maintain-by-community hut.  DOC were planning to remove the Hut in 2012 following on from a high-country review in 2004. The Hut was was in very good condition and the removal decision put down to funding cuts. Ex NZFS culler and Permolat member Peter Robins signed a maintain-by-community contract with DOC in 2012.  This was superseded some years later by a general agreement we have with DOC for a number of low-use huts in the region. There have been a couple of new expressions of interest in the Hut recently that DOC are processing. Over the past few years the access road from SH6 has deteriorated considerably. The local paddle sport community have been active in lobbying to have this repaired.

Location
Kakapotahi catchment. Grid Ref: E1422742/ N5229773 (BV18 227 298). Map BV18. Altitude 295m. Polluck Creek Hut is located on the TL of Polluck Creek just up from its confluence with the Kakapotahi River. Polluck is the only hut in this small, multi-branched catchment that drains the Hitchen Range and Dickie Ridge. The various branches of the Kakapotahi are rough and steep, with numerous waterfalls. Polluck Creek is the most benign of the tributaries and runs SW along the Great Alpine Fault from Truran Pass. Polluck Creek Hut is used mostly by local hunters, and very rarely by tramping parties. Having such close road access makes it an ideal venue for giving kids, or the less experienced their first taste of the hills, and an old-style open fire hut experience. Local kayakers are also keen to keep the valley and its resources open for access including addressing the issue of the deteriorating access road.

Access
Access to Polluck Creek is via an old forestry road that turns off SH6 just South of the Kakapotahi River bridge. The land the road passes through initially is owned by Ngai Tahu Forestry Estates. Public access is not an issue for them, however a permit is required. from PF Olsen Ltd, 95 Tainui Street, Greymouth, Phone 037686424. They require the following information; Name, Purpose of permit, Postal Address, Contact phone number, Drivers Licence number and expiry date, Make, Model, Colour and Registration of the vehicle being used. This sounds like a lot of info, but once it’s in the system it only needs to be updated if driver's licence details, or the vehicle changes.

The road is OK for the first 2.5km or so but as it starts to climb it gets pretty rough with some serious wash outs. You could probably get a 2WD vehicle to within a 30min walk of a locked gate 1km before Cool Creek but it involves some pretty exciting driving (4WDs advised in other words). You can walk from the gate a further 1.7km to where a rough farm track drops from the road through public conservation land down to the first river flat. There is legal access up the riverbed from here, with private land on both side of the River as far as Polluck Creek. You can check the Walking Access Mapping System www.wams.org.nz for public access areas. Once in the riverbed fording to get to the Hut or to get a better line of travel shouldn't be an issue at normal flows. Cross Polluck Creek and continue up a grass flat on the TR of the Kakapotahi for 500m to where a flood channel of the River cuts into the bank. Boulderhop another 400m or so along the rocks to the track entrance to the Hut, which is marked with cairns and permolat. The track climbs leads through the bush up onto a low terrace and grass clearing where the Hut is sited. A track to the Hut track marked on the current topomap starting 300m up Polluck Creek no longer exists in any useable form. It's a fairly easy 6km stroll from the locked gate to the Hut, taking around an hour and a half.

Type
Polluck Hut is a standard NZFS S70 six-bunk design built in the 1960's. It has an open fire and is lined. DOC installed a new long-drop toilet a few years back.

Condition
Pollock Creek is tidy and in reasonably good condition, particularly for a roadend hut. DOC painted the Hut around 2004, felled some of the regenerating kamahi and scrub around the Hut and replaced the toilet in 2010. Peter and I painted the external walls and cleaned the Hut in March 2014, and he and his son replaced three piles in Autumn 2015. DOC helped out by supplying paint and cement and getting the materials, along with a batch of fireproof mattresses, dropped in by Electronet. There is a small amount of rot in the frame and floor around the fireplace. The concrete pad in front of the fireplace has a large depression where folk have been cutting wood. There are some small rust holes on the outside of the chimney around 1.5 metres up and the internal iron hearth surround has corroded away. The concrete behind it is still intact, but will probably crumble or crack with the heat of the fire over time. The louvre handle on the Northern window is broken. The insects screens on the windows are intact, but mozzies will come down the chimney during the warmer months. Some screws have gone missing from the hinges on the door. These are starting to lift, making the door less secure.

Routes
There is reasonably easy access to the Mikonui valley from Polluck Hut via Polluck Creek and Truran Pass. It is mostly creek travel up Polluck Creek with a short section of track leading from the head up to the Pass and the junction with the Dickie Spur track. The tracked bit is not officially maintained, was given a trim by volunteers in 2010, but probably getting a bit overgrown again. From the Pass the Dickie Spur track sidles along the terraces above the TL of Truran Creek then drops steeply down a spur to the Tuke River. It continues down the TL of the Tuke to a swingbridge at the top entrance of the lower Tuke gorge, crosses and climbs steeply for 15 minutes over a bush terrace and down onto Mikonui Flat. Mikonui Flat Hut 200m NW from where the track ends on the scrub boundary. Allow 2-3 hours from Polluck Creek Hut to Mikonui Flat Hut. The Dickie Spur and Tuke sections of the track are fully maintained and were last cut by DOC in 2019.

Dickie Spur Hut can be accessed by continuing uphill from Truran Pass. The track climbs steeply up a side spur onto Dickie Ridge, flattening in the alpine scrub zone and continuing up through open tussock patches to the Hut turnoff at the 1200m contour. The route to the Hut drops NE down a side spur and is marked with small wooden stakes. The Hut is on a tussock bench just above the scrubline. The Dickie Spur section of track was recut by DOC in April 2012. Allow 4-5 hours to get from Polluck Creek Hut to Dickie Spur Hut.

An old Forest Service track behind Polluck Hut up onto the NW spur of Dickie Ridge hadn't been maintained for around 40 years and was extremely overgrown. In March 2014 it was relocated and cut in a rudimentary fashion to around 950m. It was marked to the bottom of the rata zone. Above this it is poorly marked still, and would be quite tricky to stay on when heading downhill. Above 950m it has pretty much vanished in the sub-alpine scrub.

An old route onto Mt. Allen and the Hitchen Range via Slip Creek documented in NZFS guides is no longer any good. Slip Creek is unnamed on the map and enters the Kakapotahi at E1422497/ N5229332 (BV18 225 293). The TR fork once used for access, has a waterfall in the lower part with steep eroding sides. Further up the slip faces look vertical. Swandri Spur is on record as being a fairly long and gruelling scrub-bash.

The Hitchen Range is good travel in most places except for couple of steep exposed sections between Mt. Allen and Mt. Hitchin. These can be avoided by dropping from a flat bench with tarns 400m SE of point 1385m into the TR upper fork of Isobel Creek. A steep gut starting around E1421363/ N5225726 (BW18 214 257) provides access from the bench down into the upper basin of this fork. Head up the ridge on the TR of the basin onto the crest of the Range at Ridland Saddle. Access down Chainman Creek into the Waitaha from the Saddle is possible, but not easy. The creek is gorged from the scrub zone down and lengthy sidles through the scrub and lower down bush, are required. Top Waitaha Hut is accessed by continuing along the Range to the low point at E1424995/ N5224187 (BW18 250 242) and dropping into the top basin from here. Once on level ground it is an easy stroll upriver to the Hut. Someone still needs to find a good route onto the Hitchen tops to make this crossing viable from Polluck Hut.

The Kakapotahi River is negotiable above Polluck Creek for around an hour. The first half is easy boulderhopping, but after this it becomes progressively more rough and gorgy. The first couple of gorgy bits can be skirted through the bush on the TR, but around one kilometre below Isobel Creek the valley wall steepen and river travel is no longer an option.

Repairs Needed
The door hinges need to have the missing screws replaced. The roof still needs painting, although this is by no means urgent. There are a few small spots of exposed iron on the south side above the eaves and a significant crust of red algae that Peter has treated and will be removed prior to painting at some point. He'll also repaint the window frames. The rotting sections of floor and frame around the fireplace, need replacing and the hole in the hearth needs filling. The louvre handle needs fixing or replacing. The small holes on the outside of the chimney need filling and/ or patching. A new inner iron retainer for the chimney is required. Some rust killer and metal primer needs to be transported in. Nine of the remaining piles are in fair condition, but will need replacing over the longer term.

Provisions on Site
A broom, hearth brush and hearth shovel, a galvanised bucket, two plastic buckets, a bow saw, two axes, a latticed grill plate with handle, a large wok-shaped frypan, a hammer, some small staples and a few 4" jolthead nails. There is five litres of Lichen acrylic for the exterior walls left over from the March repaint. Four litres of Karaka coloured Dulux Weathershield acrylic gloss for the roof, and a litre of white for the trim. There are two mixing pails and a plastic scrubbing brush.
Powered by