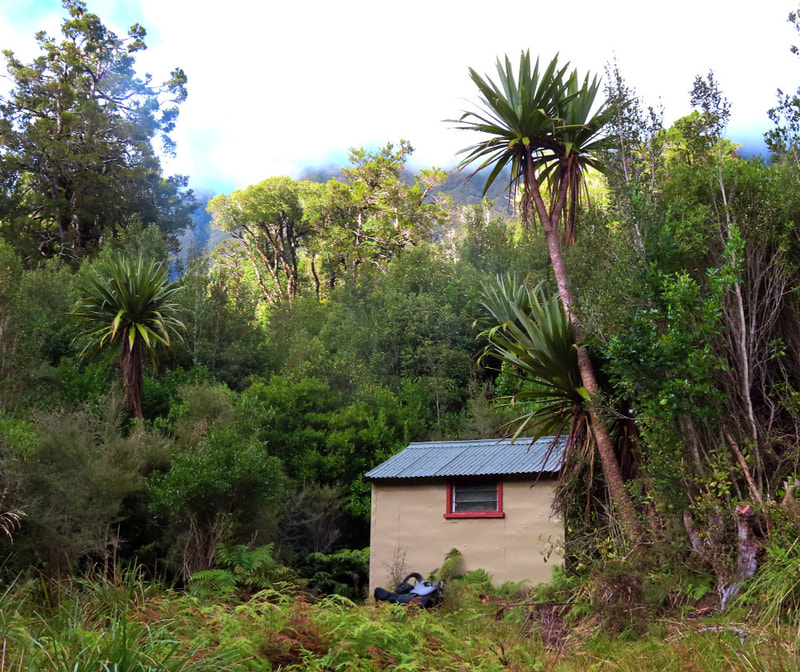 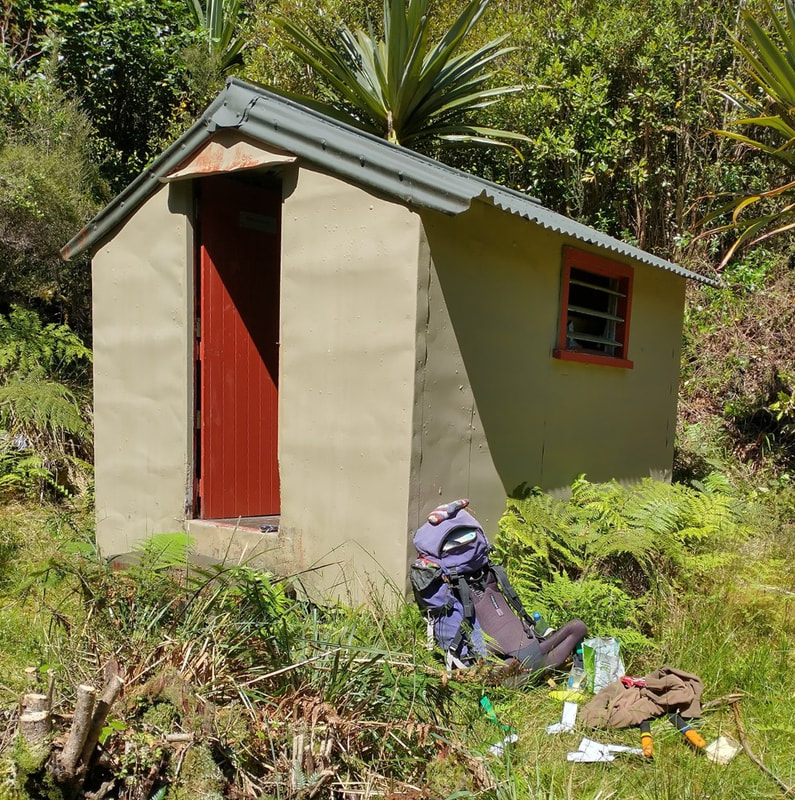 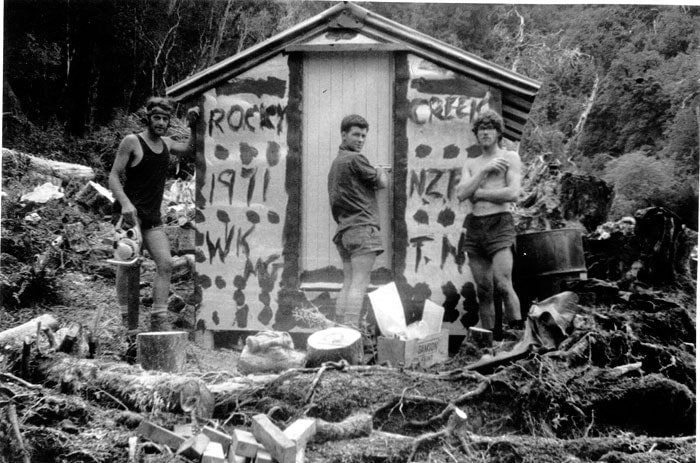 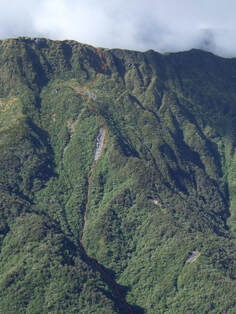 Route up onto Scottys Range from the head of Rocky Creek
Maintenance Status
Rocky Creek Biv was designated as minimal maintenance by DOC in 2004 and the access tracks to it from the Taipo valley and Griffin Creek have been kept open by volunteers. The most direct of these from the Taipo roadend into Rocky Creek is in reasonable condition. From where the cut track enters the Creek to the Biv itself, is mostly rough river travel with multiple crossings and some wading involved. There are a few old tracked detours on the TL which have become overgrown but can still be followed with a bit of care. The route over from Griffin Creek is also in reasonable condition. Ollie Clifton of the Back Country Trust was planning on taking a Kaimahi For Nature crew into Rocky Creek to do some maintenance on the Biv in May this year, but that has been postponed until next summer. Peter Umbers of Christchurch is the latest in a series of community people who have taken an interest in maintaining the Rocky routes. He's been busy this year doing bits and pieces on it.

Location
Taipo catchment. Grid Ref: E1469915/ N5261720 (BV20 699 617). Map BV20. Altitude 615m. Rocky Creek Biv is located on the TR of Rocky Creek in the Taipo River catchment. The bush surrounds are rata-kamahi forest and there is pleasant remote ambiance here. Rocky Creek Biv has historically been low-use, with numbers dwindling to a trickle during the 1980's and 90's due to deteriorating tracks and a lack of good route information. Visits have increased since the tracks were fixed up and the Biv profiled on this website. A lot of the folk visiting the Biv are doing a two-day Rocky Creek - Griffin Creek circuit, exiting from the Griffin via the Harrington Creek track to SH73.

Access
The Rocky Creek track from the Taipo roadend wasn't maintained after DOC took over from the NZFS in 1987. For many years Frank King and Honora Renwick of Christchurch kept the route open. Eigill Wahlberg has also taken an interest and has reinstated some bypass tracks in Rocky Creek and cleared the windfall on the track across the terrace from the Taipo. Another group did some light trimming on the way through in April 2019. Peter Umbers and friends began doing some work on the tracked sections in January 2022 and this will continue. The route commences at the Taipo bridge on SH73 and follows the TL of the Taipo. A cut track starts at the top end of a grassy terrace and leads to the first side-creek. The terrace track starts on the TR of the creek and climbs steeply before levelling and sidling upvalley and around into the Rocky Creek catchment. The track drops steeply into Rocky Creek at the bottom end of a small gorge. From here it is around two hours to the Biv. Most of this is river travel with a couple of short track detours around a waterfall and a slumped area of hillside above a small gorge. The track up to the Biv starts on the TR and is marked by a large cairn and permolat. It follows a small side-creek initially, then exits on the TL and sidles around to the Hut. Allow 3-4 hours from the Taipo Bridge to Rocky Creek Hut currently. This is a fine weather route and would be difficult or dangerous if the Creek were up.

Access to Rocky Creek Biv from the Griffin Creek catchment is over a low bush saddle. Peter and friends did some trimming work on the tracked sections in January 2022. The route commences at the unnamed side-creek that drains Scottys Saddle, 15 minutes downriver from Griffin Creek Hut. A track goes up the TL of the creek a short distance, crosses to the TR, and sidles from here over into the side-creek that leads up to the Rocky Creek saddle. This creek forks in its mid section and a track exits the TR fork a short distance up and crosses over into the TR fork, to avoid a small waterfall. It is a 10 minute climb up to the Saddle from the streambed. The track drops directly from the saddle into Rocky Creek and the Creek is followed down from here for around an hour to the Biv. Multiple crossing and a fair bit of wading are involved and the route would be difficult if the Creek was in flood. Allow around three hours from Griffin Creek Hut to Rocky Creek Biv.

The clearing next to the Biv that provides helicopter access had some work done on it by Peter and friends in January 2022.

Type
Rocky Creek is a one-off B143 high-stud design built in 1971. It replaced a tent camp on the other side of the Creek that had been established some time in the 1960's. The NZFS construction crew were Warren Keely, Tony Newton (Field Officer) and Mario Gerimia. The Biv is lined, but has no heating or toilet. Water is from the Creek 50m away.

Condition
Rocky Creek is very well constructed and remained in good condition during a long period of zero maintenance through the 1980's and 90's. In 2004 DOC resealed and painted it, replaced the door, and made a few other minor repairs. It is in relatively good condition currently, however here are two broken louvre panes in the window on the South wall sort of holding in place by themselves at the moment. The opening lever has snapped at the fixture end on the window on the other side.

Routes
The saddle over into Griffin Creek is around an hour's creek travel upstream from the Biv. It is visible from the Creek and has a large open slip on its northern side. The track entrance is 20 metres up the Creek past the slip.

Scottys Biv can be accessed via the head of Rocky Creek which is followed up past the Griffin saddle turnoff. It narrows considerably, needs to be waded, is steep and slippery in places. At around 1100m it forks and the TL fork is followed. It steepens and eventually peters out on a steep scree. Climb onto the spur above the scree and continue up through a narrow band of low alpine scrub and across a rockfield towards the crest of the Range. The faces directly above this are very steep, and it is easier to sidle SW over a narrow ridge and then climb up onto the crest from there. From here it is a straightforward 20 minute drop in a SE direction to Scottys Biv, which is visible from near the top of the Range. Allow 2.5-3 hours from Rocky Creek Biv to Scottys Biv.

Repairs planned
The Kaimahi For Nature crew are planning to reroof the biv and replace the louvre window with a single glass pane one. Some relining and painting was also planned. The chopper pad needs to be cleared back first. At the moment you would be unlikely to get a machine in there. More work needs to be done on the bush detours in the Creek downstream from the Biv. Peter plans to make this a work in progress.

Provisions on Site
One billy, an aluminium basin, a large bow-saw, a shovel, a crowbar, a mattock, a jar of small nails, some red and white permolat, a hammer, two long pieces of tongue and groove, a coil of fine wire, a broom, two galvanised buckets, two bench seats, and a brush and shovel.
Powered by