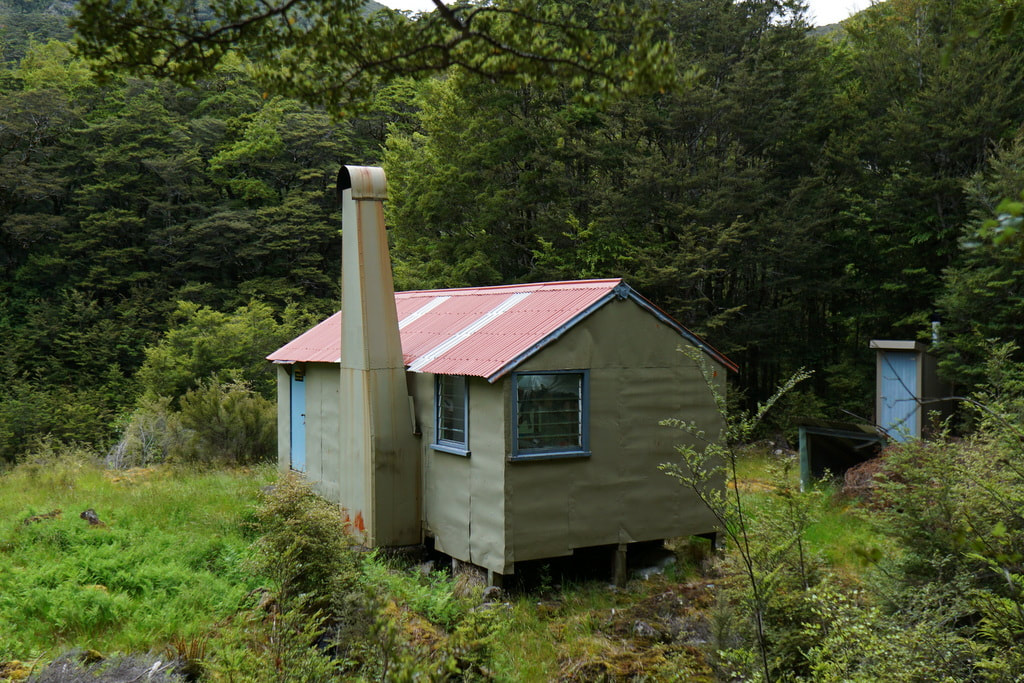 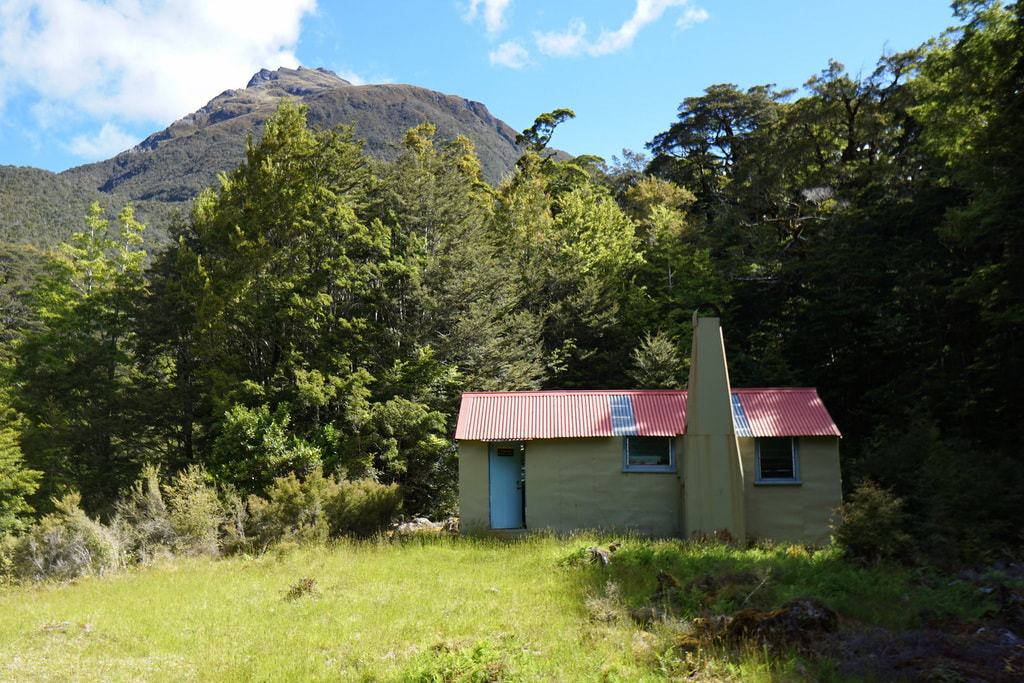 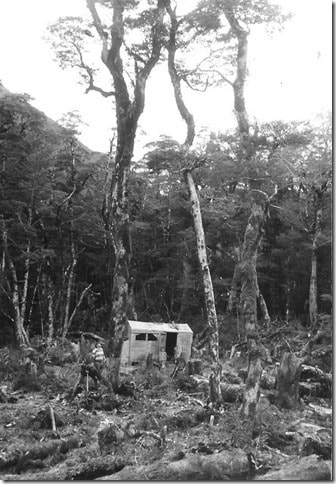 Maintenance Status
Although sited in Arthur's Pass National Park, Otehake was ostensibly fully maintained by DOC Hokitika. No work had occurred for some time however, and a few things were starting to run down. The Department seemed happy when Hugh Van Noorden from Permolat offered to take it on as maintain-by-community project. Back Country Trust provided the funding and the maintenance was carried in two stages out in 2017 and 18. The access track up the Otehake River from Lake Kaurapataka had been a zero/ low maintenance affair for many years. There had been been some confusion about its status after it was gazetted as a wilderness area in the 1960's and left to run down. DOC went in at some point and put orange triangles on some of the trees, but the difficulty of the trail and its notoriety was a sufficient deterrent for most, and few were game enough to make the trip up the valley. The Hut tended to be accessed from the Canterbury side of the Divide via the Edwards valley and Taruahuna Pass. The main valley track was recut and marked for the first time in many decades during the second round of maintenance in December 2018. DOC went in and did a partial chainsaw run in in 2021.

Access
Main valley access to Otehake Hut is from the the Aickens Corner carpark on State Highway 73, nine kilometres North of Otira. Markers lead from the car park along the fenceline, across the paddocks, and through small gate to the Otira River. The Otira is braided and its channels can be crosses in a NE direction to the end point of bush at the Otira/ Taramakau confluence. From here either follow the poles along the bush fringes on the TL of the Taramakau, or continue NE across the river flats and pick up the 4WD track further up. The latter is faster and more direct and both routes eventually merge.

Around 100m before Pfeifer Creek the Lake Kaurapataka track branches off the 4WD track and follows poles that lead SE through patches of gorse and regenerating scrub to the Creek. The track crosses and follows the TR of Pfeifer Creek to Lake Creek, which it follows on the TL to the Lake. The lakeside section of track passes through stands of magnificent 40m tall Red Beech with impressive buttressed roots. The track to and around the Lake is maintained by DOC. The Otehake route splits off from it on the low bush saddle at the Eastern end of the Lake and continues upvalley sidling above the Otehake Gorge for half a kilometre before dropping into the River.

Follow the River from here to the flat with the hot spring. Above the hot spring to the first side creek on the Otehake TL there is only a minimal route in the bush, and it is usually easier to follow the River. There is a short section of marked track starting just before the creek. From the creek the track climbs steeply for around 150 vertical, sidles, then drops into Whaiti Stream. It climbs out of the Stream and continues an uneven high sidle through rough terrain to the Hut. Allow 7-8 hours currently to reach Otehake Hut from Aickens corner. The Otehake valley section takes 5-6 hours. The terrain is rough however and parties need to be fit and experienced in order to have a good time. DOC went in and did a partial chainsaw run in in 2021 but there are a few patches could do with better marking. Whaiti stream and some of the larger creeks would be unfordable after heavy rain. A flood track down the TR of the Otira from the Deception Footbridge and adds a good hour to the trip.

There is access to Otehake Hut from the Canterbury side of the Main Divide via the Edwards and Hawdon valleys. The most straightforward and direct route is from Edwards Hut and the upper Edwards basin. It is easy open tussock and riverbed travel to Taruahuna Pass, then across the bouldery avalanche debris of Falling Mountain and down into the West Otehake basin. Follow the basin to an obvious flat grassy area (E1492243/ N5251831 (BV21 922 518)), and cut across the flat into the first side-branch of Lake Sally Stream. Follow this down to just past where the main branch comes in and then exit up following cairns and poles through scattered scrub onto a bench above the shingle bluffs on the valley sides. A marked route leads through stunted beech and scrub down to where Mt. Russel stream joins the West Otehake. The entrance of the track proper is on the TL of the Otehake about 500m downriver from here. This bit was recut by Hugh and his crew in December 2017 and is good travel. Allow around four hours in good conditions for the crossing from Edwards Hut to Otehake Hut. Deep winter snow could slow progress considerably.

The other main Canterbury route is from the Hawdon and involves crossing Walker Pass into the head of the East Otehake, then over Tarn Col and down onto Taruahuna Pass. There is a good cut track from Hawdon Hut up into the basin of Twin Fall Stream. From here the route is poled up to and over Walker Pass. Head down the East Otehake for 800m to the first big side creek on the TL and follow this up to Tarn Col. It is a short steep descent from here down to Taruahuna Pass. Allow 5-6 hours for the crossing from Hawdon Hut to Otehake Hut in good conditions.

Type
Otehake Hut is a extended S70 six-bunk design with open fire built by the NZFS in the late 1960's. Dave Richardson relates that there was an old hut there before the new one was built. Dave, Ray Forsyth, and Harry Waters cleared a chopper pad downstream from it, so materials for the new hut could be brought in. A vestibule extension with door was added after the hut was built. A new toilet was a reasonably recent addition. Water is from the River. There is a small woodshed and dead wood for the fire on the terraces around the Hut.

Condition
Otehake Hut is in pretty good shape after the 2017 and 18 efforts, although will still need some pile work at some point. The 2017 work party was Hugh, Colin Morris, Peter Fullerton, and Geoff Spearpoint. Myself and Joke de Rijke helped out on the 2018 project. In 2017 significant reframing and window repairs were done and the internal lining replaced. Some rotten floorboards and the ridging were also replaced. UV stabilised plastic was added under the skylights and the leadhead nails in the roof were replaced with tec-screws. The roof was treated and painted in 2017, however for some reason this hasn't stuck well. In 2018 some bearers were replaced, a new iron backing to the fireplace put in, door and porch repairs done, a new woodshed built, and the interior and exterior walls repainted. The uncut portion of track down towards Whaiti Stream was finished off and marked.

Routes
For the more adventurous an alternative route from the Hawdon exists directly down the East Otehake valley from Walker Pass. This involves some fairly rough river travel and is a fine weather route only. Travel is down the riverbed to a small gorge that must be bypassed on steep mossy rock on the TL, or alternately a short swim. A second gorge on the last stretch before the West Otehake junction can be avoided by climbing 100m over a spur on the TL.

An unnamed creek on the TR of the Otehake 300m downriver from the Hut gives good access over to Chasm Stream and the Poulter valley. Use the scree on the TL in the head of the creek to access the Main Divide at the 1500m contour NW of point 1647m. The ridge on the TL of the creek is also navigable.

Access to Lake Sally is gained through patchy scrub on the ridge on the TR of the stream which drains it. It is also possible to use the slopes on the TL of the stream to access a flat area East of Mt. Franklin and sidle from here around to the Lake. There is a camp site under the knoll near the outlet. Ice axes and crampons need to be carried on this route in winter. The faces under Mt. Franklin are also highly avalanche prone at this time of year.

When the Koropuku River is low it is possible to travel up through its gorge from the Otehake to Koropuku Hut. There are some waterfalls that must be negotiated and it is pretty slow going in places. Probably more fun in high summer. More detailed route notes can be found on tramper.nz/4991.

Kiwi Hut in the Taramakau can be accessed from the lower Otehake by boulderhopping from the Koropuku Hut turnoff down to the Taramakau. Cross where practicable to pick up a 4WD track upsteam of Jacksons Creek. The Kiwi Hut turn-off is marked with a large routered sign and a track takes you through a patch of beech and a big grassy clearing to to a low terrace where the Hut is located. It takes around an hour and a half from the bottom end of the Koropuku track to Kiwi Hut. This is a fine weather route also.

Repairs
The roof needs repainting. Several piles will need replacing in the longer term. Some additional marking may need doing on the valley track.

Provisions on Site
An axe, two billies, an original NZFS wall-mounted can opener, and a shovel.