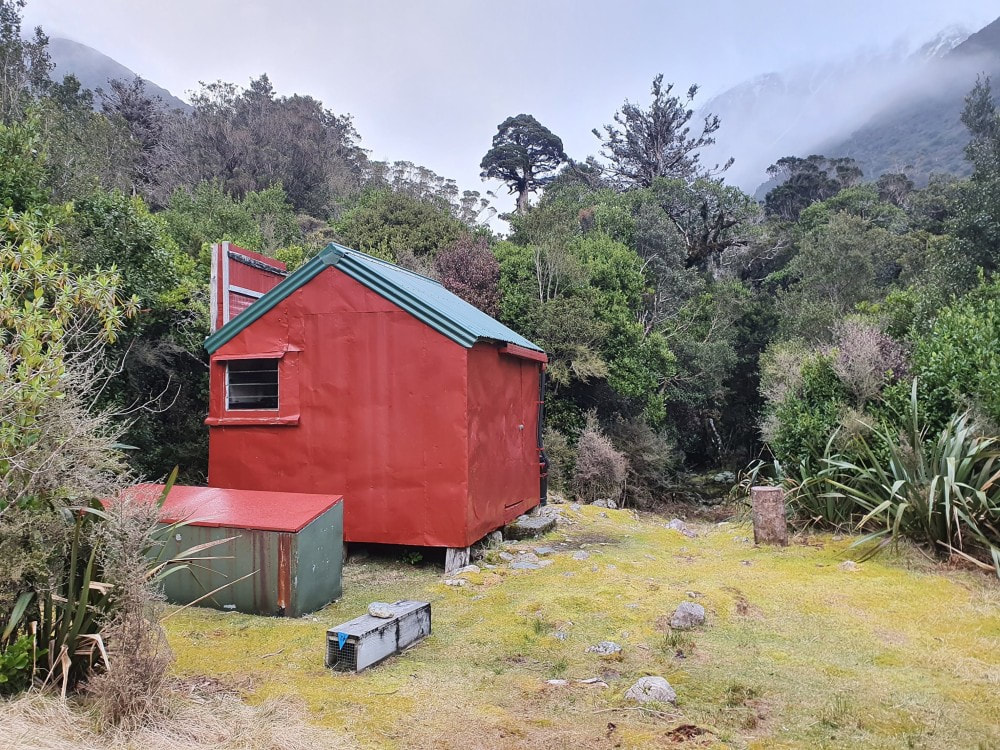 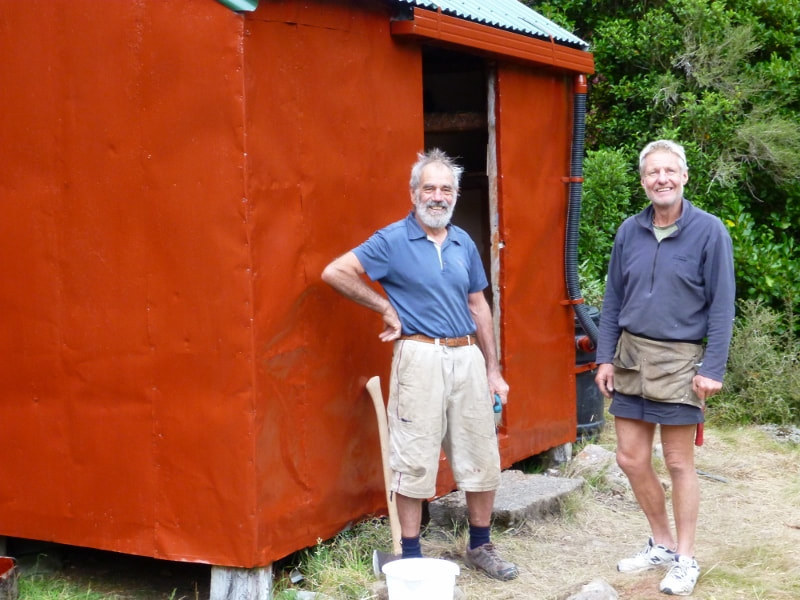 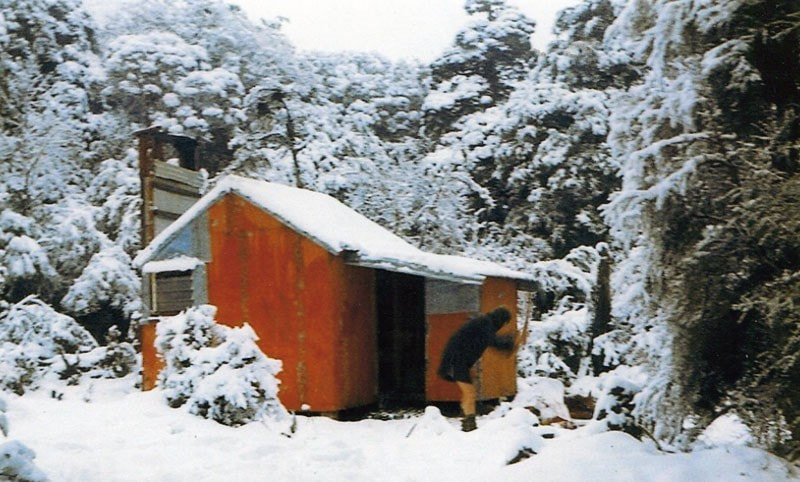 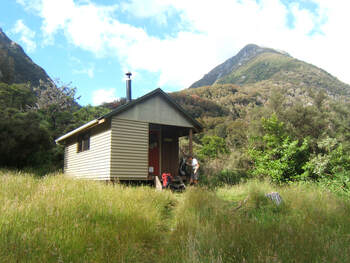 The new Julia Hut: Photo from the Flickr Website - Tom (dirigentik)
Maintenance Status
Old Julia Hut is a joint DOC/ volunteer project. DOC had always acknowledged its historical significance, but never did any maintenance on it. Permolat got involved in 2013 and the Hut received a complete makeover in February 2014 from Permolat member Max Dorfliger and his friend Dick Brasier. DOC contributed most of the materials and choppered them to the hut site. The valley tracks providing access to Julia Hut are fully maintained by DOC and were last cut in 2021.

Old Julia Hut was built in 1958 by the NZFS. Its frame and floor were pit-sawn from the surrounding forest and split and adzed to size. Lands and Survey had jurisdiction of the valley in the 1980's and built a new hut on the river terrace below the old Hut in 1986 to cater for increased demand from trampers doing the Harman Pass crossing from Canterbury. The old Hut continued to be used now and then, but became increasingly dilapidated over the years.
Stories circulated in the past of Old Julia being haunted by one of two girls who drowned in the valley in the 1800's, and after whom Mary and Julia creeks are named. The late Allan Duckett who worked the area in the 1960's as an NZFS culler recounted hearing a knock on the door one night around midnight but wasn't game to leave the protection of his sleeping bag and greet the visitor.

Location
Taipo catchment. Map BV20. Grid Ref: E1471436/ N5249320 (BV20 714 493). Altitude 610m. Old Julia Hut is located in a clearing on a terrace in the upper Taipo valley, a short distance downriver from the Mary/ Julia Creek confluence. The new Hut on the terrace below gets a steady stream of traffic, mostly crossings of the Divide to or from Canterbury. The old Hut gets a bit of the overflow when the new one is full, and the odd traveller seeking a some old-style ambience. The other main attraction apart from the superb walking and popular Main Divide crossings, is the hot spring at the River's edge just downstream from the huts.

Access
The Julia huts can be reached in a reasonably long day from the Taipo roadend, or 3-4 hours from Mid Taipo Hut. Most folk allow two days when crossing from the Canterbury side, from Klondyke Corner and the Waimakariri via Harman Pass. The access road up the TR of the Taipo from SH73 on the West Coast side has deteriorated over the years and unless you have a high stud 4X4 vehicle you'll now need to walk to Dillons Hut. A track leads from here up the TR of the valley to a three-wire above Scottys Creek where the main valley route crosses to the TL. An initial short steep climb around a bluff on the TL can be avoided when the River is low by staying on the TR and fording just below Hunts Creek where the River braids. This offers a quicker and more direct line. Travel on the TL is up a series of grassy flats to just above Dunns Creek, then a short tracked section to the next flat below Hura Creek. From Mid Taipo travel is up the TL until just above Micks Creek, where a swingbridge takes you across to the TR. From here it is a couple of hours along the bush faces to the Julia Huts.

The route from Carrington Hut on the Canterbury is up the TR of the White River to the Taipoiti confluence. A cableway crosses the White and the route continues up the Taipoiti to Harman Pass. Travel in the upper basin of Mary Creek is straightforward. It is poled but these are an indication of general direction only and it's best to pick your own line here. A track leads from the scrubline down the TL to the swingbridge just above the Julia Creek confluence. The huts are a few minutes from here. The tracked sections up Mary Creek were recut by DOC in 2021. Allow 5-6 hours in good conditions, for the crossing from Carrington Hut.

Type
Old Julia is one of the early NZFS four-bunk structures. The frame and floor were constructed from pit-sawn and adzed Halls Totara from the surrounding forest. The walls were simple iron cladding with a chicken wire/ tar paper inner lining. Some of the original floorboards were replaced with chainsawn macrocarpa planks at some point. The remains of a slab porch covered with flat-iron that was still attached in 1983 when Greg Ross worked there, can be found lying in the scrub near the Hut. Water was originally from a tarn on the terrace, a short distance downriver. Walking down to it won't be necessary now with a new water barrel installed. Hut users currently use the new Hut's toilet on the terrace below. 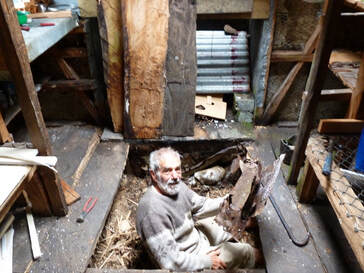 Max working on the floor in 2014
Condition
Old Julia is once again in good condition. Max and Dick's renovations were extensive and included joining floorboards together more tightly with macrocarpa boards from Max's farm filling the gaps. A pile under the door was replaced and the door stiffened on its hinges. The original wire bunks remained in place, with foam mattresses added. Prefabricated cloth and polystyrene panels were inserted in the spaces between the wall framing for insulation. The old roofing iron was wrapped around the Hut walls and new colour steel sheets overlaid. A small water tank was installed with a spout arrangement, screw top lid, and a hook inside for a billy. The chimney had some of its more rotten timber framing replaced, and received a coat of paint. Replacing the rusty chimney iron would have required a rebuild, and it is hoped that users keep fires to a moderate level so as to not burn off the paint. Two rimu stools were built by Dick with timber sourced from Max's supply. The Hut was repainted externally.

Routes
DOC no longer maintain the track up the TR of Julia Creek to the top basin and at last report it was overgrowing and may be difficult to locate at the top end. Eigill Wahlberg is planning to recut it sometime this year. Allow 2-3 hours currently to get from Julia Hut to the top basin from where it is mostly easy open travel up to Popes Pass. There is one waterfall to negotiate near the head of the basin. Some bluffs on the Wilberforce side of the Pass are avoided by climbing onto the NE slopes of Mt. Harman to a flat bench at the 1800m mark. Continue down to Browning Pass (Noti Raureka) from here use the bench track down to either Park Morpeth Hut in the Wilberforce, or Harman Hut in the Arahura. This is an alpine crossing and ice axes may be required on parts of it during the colder months. Allow extra time in winter, as soft deep snow in the Julia Creek basin could slow progress considerably.

Access onto the Campbell Range is up the second side-creek on the TR of Julia Creek. A steep scree in the head of the side-creek provides access through a band of bluffs onto a flat bench in the top TR fork of Dexter Creek. From here access onto the crest of the Range is simple and travel easy in both directions. Mudflats Hut in the Arahura can be accessed down an old NZFS track the top end of which starts around E1477643/ N5250946 (BV19 676 509). This was recut and marked by Bruce McClelland et al in 2017.  Campbell Biv can be accessed by dropping from point 1783m into the upper basin of the unnamed creek below. Sidle out of the basin above the waterfall and head along the tussock benches on the TL until roughly at the 1200m contour. Continue sidling at this level through scattered alpine scrub onto a narrow ridge around E1465947/ N5249269 (BV19 659 493). Poles lead from the ridge across the face to the Biv.

Access to Campbell Pass from Julia is via a watercourse that runs down from Taipo's Breast into Mary Creek a few hundred metres above the Julia Creek confluence. Continue from the Taipo's Breast over into the upper Campbell Stream basin, climbing out onto the shelf North of point 1390m. Walk down the shallow gully at the south end of the shelf, then sidle out to the TL and down tussock slopes into a scree gully descending from the cliffs of Carrington Peak. The gully provides easy access down to the Waimakariri.

A great high-level sidle is possible from Campbell Pass into the head of Gorgy Creek, then over a couple of unnamed cols into the head of Hunts Creek. It is a reasonably straightforward amble down Hunts Creek basin to Hunts Creek Hut. There is a short section of track through the scrub on the TR of an old moraine wall just above the Hut. An alternate route to Hunts from Julia is downriver for a couple of hours and up Dry Creek onto Hunts Ridge. Drop from the crest of the Ridge down into the basin and continue to the Hut this way. The route is shorter and less demanding than the Campbell Pass route.

Repairs needed
No major issues reported. The Hut would benefit from having a three-inch strip of plastic tacked around the door to close the gap and make it cosier. Over the longer-term, some major chimney repairs will be necessary.

Provisions on site
A billy. There is a good pair of loppers and a bow saw in the new Julia Hut if anyone wants to do a bit of track work.