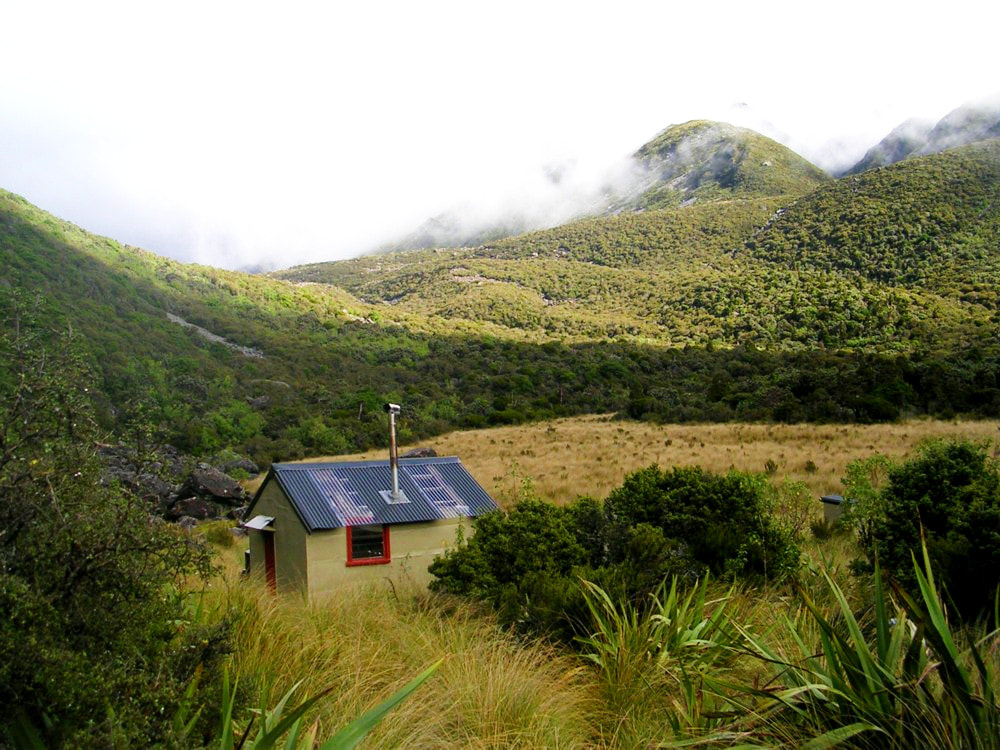 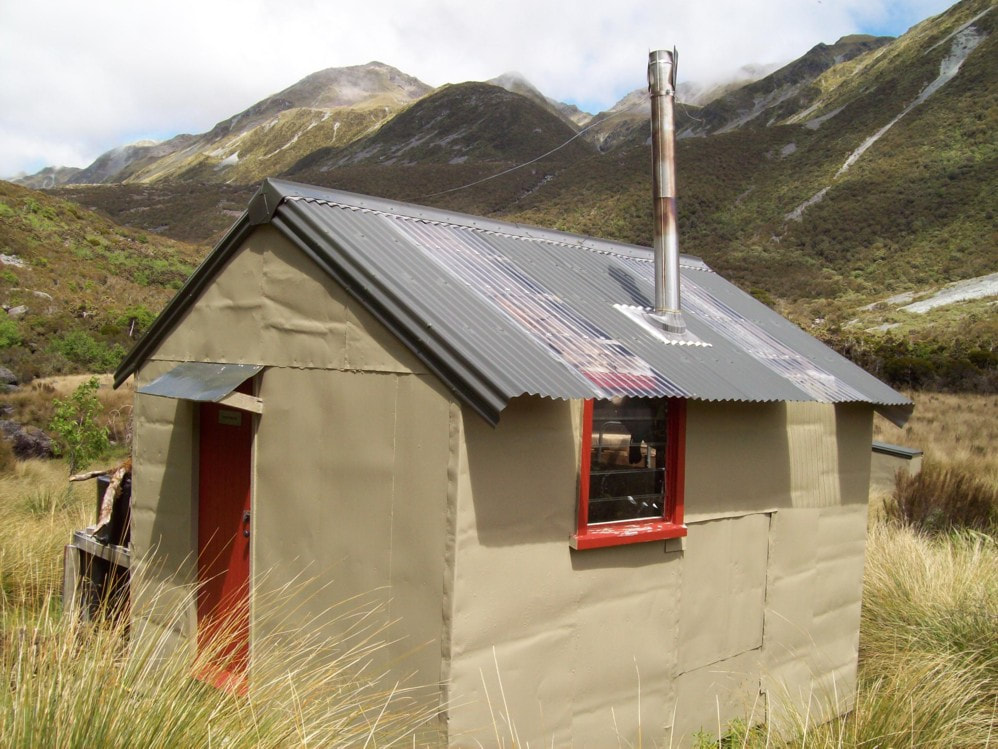 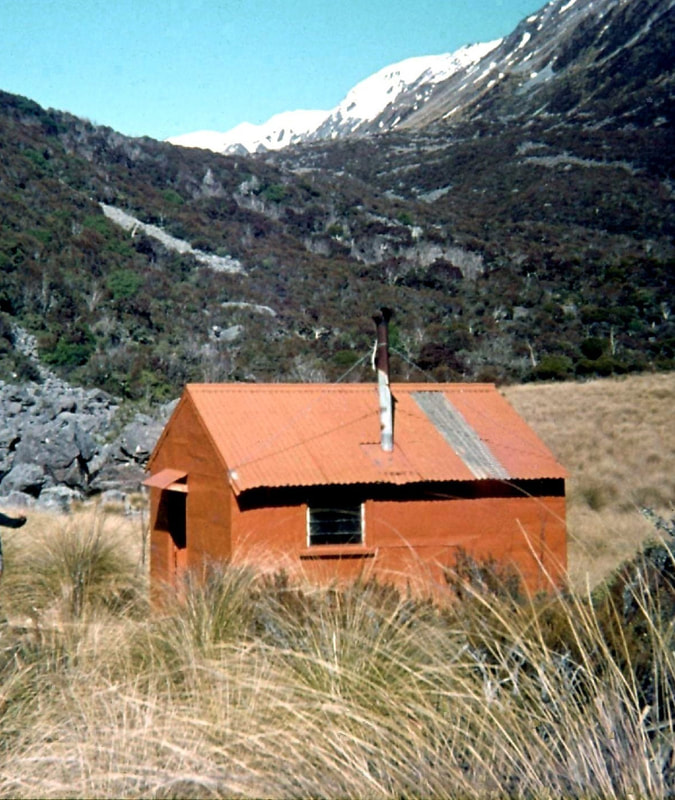 Maintenance Status
Hunts Hut and the access track to it from Kellys Creek in the Otira valley are fully maintained by DOC. The Hut's proximity to Arthurs Pass and SH 73 means it gets higher levels of use than most of the huts on the website, particularly on weekends and public holidays. Outside of these times there is still a reasonable chance you'll have it to yourself, and it is one of the few more accessible huts in Central Westland where kiwi can still be heard calling at nightfall.

Location
Taipo catchment. Map BV20. Grid Ref: E1477550/ N5255780 (BV20 776 558). Altitude 880m. Hunts Creek Hut is located in a tussock clearing in Hunts Creek basin in the Taipo valley. The peaks of the Barron and Hunts Range ring the basin and downstream from the Hut the Creek drops through an impressive, impassable gorge into the Taipo River. An old glacial moraine upstream of the Hut has a section of track leading over it into the upper basin. From here the tussock expanses slope gently for several kilometres to the Creek's headwaters where a couple of high-level cols provide access to the Gorgy Creek tops, Campbell Pass, and beyond. Hunts is a relatively easy overnighter, or can be incorporated in a longer tops journeys.

Access
The route to Hunts Hut starts 10 kilometres North of Otira at the Kellys Creek bridge on State Highway 73. The first half hour from the car park is boulderhopping, followed by a short steep climb around a small gorge. This section has become eroded and exposed in places at times, but DOC generally keep on top of this. After the track drops back into the Creek it is mostly river travel to around 700m contour in the head of the valley. The track restarts on the TL 100m up an open side creek (around E1479400/ N5258720 (BV20 794 587)). The track entrance has been recently washed out and may be tricky to locate. The track sidles above the valley through montane and subalpine forest to some open areas of red tussock and peat bog, then re-enters the forest just before Hunts Saddle. After crossing the Saddle it climbs a little then sidles the bush faces above the TR of Hunts Creek. The terrain here is uneven and rocky underfoot with lots of ups and downs. Two large screes are crossed on a gradual descent into the mid-basin. The Hut is in an open clearing which is visible from the Saddle but the Hut itself only comes into view on the last 100m of track.

Type
Hunts Creek Hut is a standard NZFS four-bunk S81 design built in the 1960's. An original open fire was replaced in the early 70's by a wood burner. Finding dry wood can be an issue here at times, and you may need to scrounge around to get enough to get the fire going. Among the Hut's numerous visitors are the not-infrequent free-lunchers who don't replace the wood they use. Hunts has a toilet and a roof-fed water tank.

Condition
Hunts Hut is in good condition currently. In 2004 DOC repainted and resealed it, and replaced some of the framing, a section of floor, the skylights, and the flue. In 2103 they replaced the woodburner with a smaller little cracker burner, which although more wood-efficient is rumoured not to have the same ability to warm the hut as the original did.

Routes
There is a relatively easy tops route to Hunts over Kellys Range from Carroll Memorial Hut. The Range is flat and open with numerous tarns and good campsites. Access to Hunt Saddle from the end of the Range is down a spur to a tarn at E1477230/ N5258460 (BV20 772 587). In March 2019 Honora Renwick and Frank King placed two marker poles at the top of this spur and recut a route through the scrub, up and over a ridge to a second tarn at E1477339/ N5258290 (BV20 773 583). Some parties haven't been able to locate the cut bit, and have ended up scrub-bashing. Head East from the second tarn to the open swampy area North of point 935m and follow the small creek draining it down to the Hunts track just East of the Saddle. The journey from Carroll Hut to Hunts Hut takes around 4-5 hours in good conditions, and a bit longer in reverse.

For the more experienced there are a couple of high-level routes to Hunts Hut from the Otira valley over Barron Ridge. Both start from SH73, South of of Otira and are cut and marked to the tussock. The first begins at the top of of the pipeline in Goat Creek and goes up onto a spur North East of Mt. Barron. The tracked section is not officially maintained but has been kept in good order by Doug Forster of Christchurch. The route starts at the large blue "Hotel 500m" sign and follows up the pipeline. From the top of the pipe the track climbs up the bush faces onto a spur which it follows to the tussock. The spur flattens at 1200m and a line is followed due West to the saddle between Mt. Barron and point 1629m. Cross the saddle and sidle across the two large basins beneath Mt. Barron on the Hunts side. Drop into Hunts Basin proper down a large scree, the downriver-most of two that intersect the track downstream of the Hut. The Hut is visible in fine weather from the top of the route down.

The second route starts on the roadside 200m North of the railway underpass. The tracked section to the tussock has been dropped off DOC's maintenance schedule, is overgrowing, but was still followable at last report. It wouldn't be too much of a job to tidy up. Continue from the top of the track up and over Point 1569m into the top TL basin of Holts Creek. Climb from here to the low point between Point 1760m and Mt. Barron, cross and drop down to the 1500m contour. The descent to Hunts Hut from here is the same as for the Goat Creek route. Allow a full day and good conditions for both routes. Ice axes and possibly crampons should be carried in winter and spring.

A crossing of Hunts Ridge over into the Taipo valley from Hunts Hut is a relatively straightforward affair, with a number of possible routes down on the Taipo side. Dry Creek is the one most frequently mentioned in the Hunts hutbook. Mid Taipo and Old Julia Hut can be reached using these routes.

The upper basin of Hunts Creek provides access into the heads of Gorgy and Tumbledown Creeks, and from here to the upper Rolleston valley, Campbell Pass, and the Waimakariri tops. Access down into the Waimakariri River from Campbell Stream basin involves climbing out of the basin onto a shelf North of point 1390m. Descend the shallow gully at the South end of the shelf, then sidle out on TL and down tussock slopes into a scree gully descending from the cliffs of Carrington Peak. The gully provides easy access into the Waimakariri.

The Julia huts are accessd by continuing West along the Main Divide from Campbell Pass towards the Taipos Breast. The route down is via a watercourse that runs from the Taipos Breast that enters Mary Creek a few hundred metres above the Julia Creek confluence. A high col on the Main Divide North of Mt. Campbell between points l805m and 1801m provides access to Harman Pass. All of the above are high-level alpine crossings and need the requisite levels of fitness, experience and gear.

Finally, there is an alternative, reasonably challenging, untracked route down Barron Ridge to the Kellys Creek carpark. The Barron Range is accessed up the the second big scree downriver from the Hut. Exit the TR of the scree around the 1280m contour and sidle across the tussock benches under point 1492m to the col between Mt. Barron and point 1629m. Cross the col and drop from onto the high bench on the Otira side, around 1420m, and continue along it to point 1359m. Drop down the main spur from here to the scrubline. There is short scrub-bash from the tussock boundary at the 900m contour into the montane forest, followed by a routine bush-bash down to point 615m. A recent party described this bit as an "epic," however because it's such a broad spur, there are OK and less OK lines that can be taken. The odd old blaze can be found on the ridge around point 615m, and between here and the car park is pretty mean bash through dense stands of regenerating hardwood. Allow 5-6 hours from Hunts Hut to the road in good conditions.

Winter times for all the alpine crossings can vary considerably depending on snow conditions. Do not attempt to access the Taipo valley directly down Hunts Creek as the gorge in its lower reaches is impassable.

Repairs
None at last report.

Provisions on Site
Three billies, one camp oven, one aluminium bucket, one small frypan, an axe, a slasher, a shovel, a broom, and a hand brush and shovel. There are a few waratahs under the Hut.