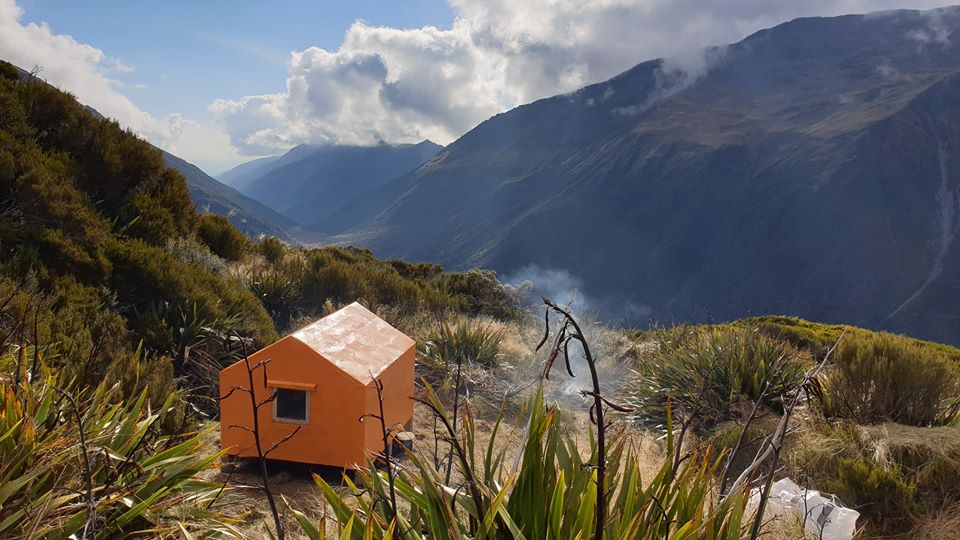 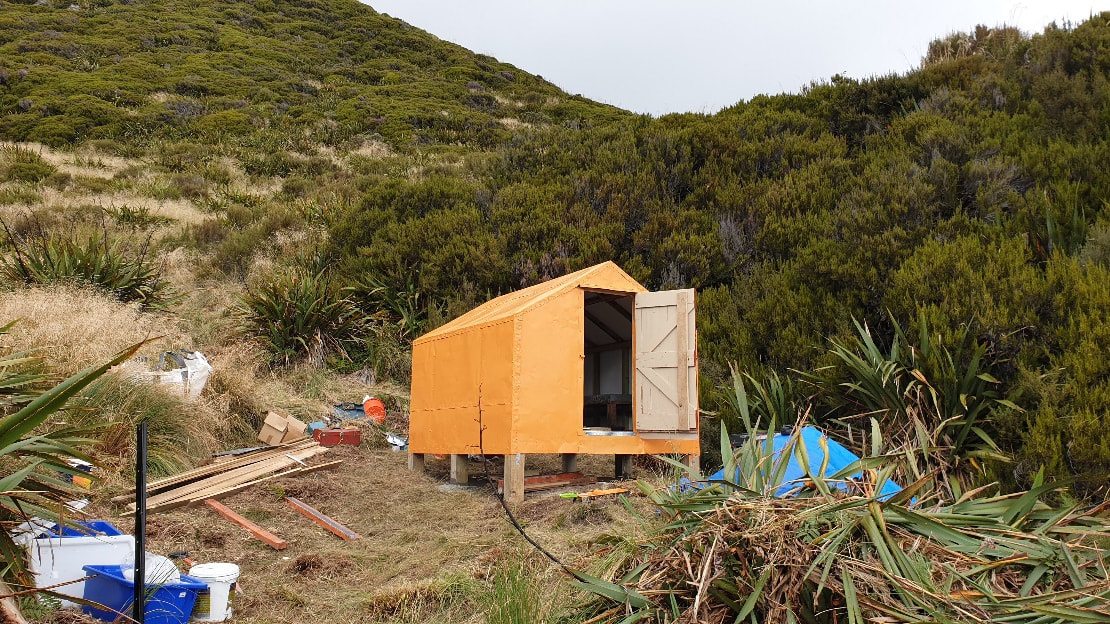 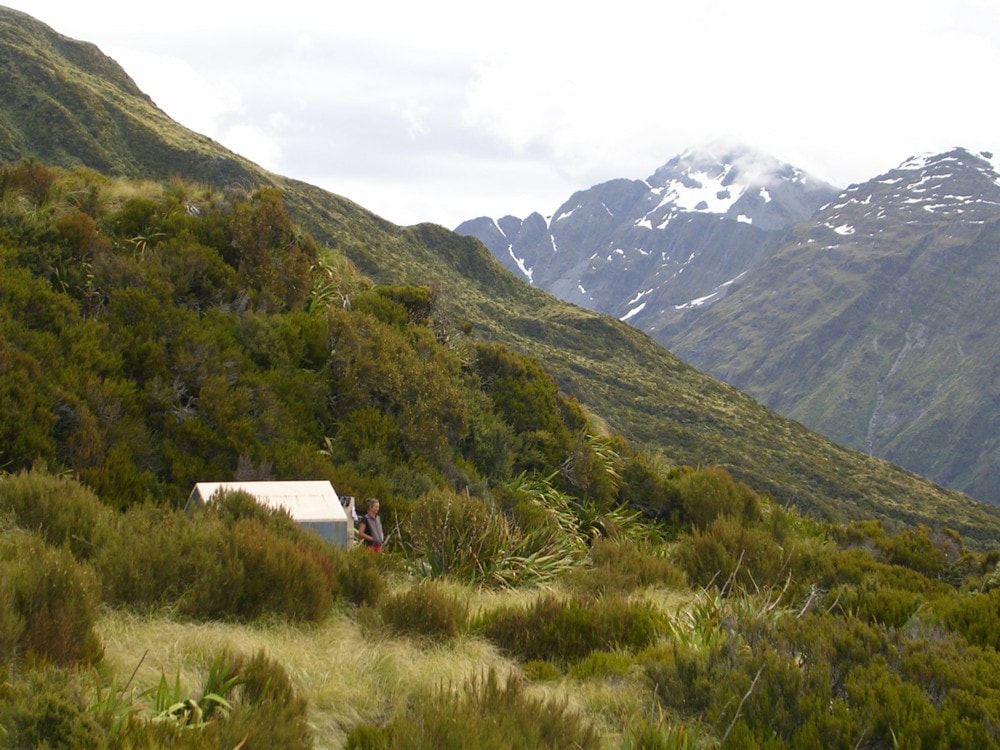 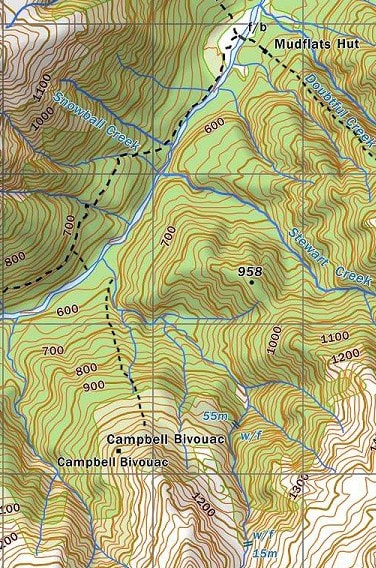 Maintenance Status
Campbell Biv was designated for removal in DOC's 2003/ 4 High-Country Review. It was in remarkably good condition after 30 years of zero maintenance, but almost never visited. Few people would have known of its existence at the time, or how to get there. Shortly after making the remove decision DOC flew some volunteers in to repaint Campbell and wire down its piles, the first maintenance since 1974. The job was pretty much cosmetic however and it wasn't until 2017 that Paul Reid of Permolat with the help of Back Country Trust funding, did some serious work on the Biv. A more or less complete overhaul was completed in March 2019. Campbell is located in the Waitaiki Historical Reserve which is overseen by the Mawhera Corporation.

Location
Arahura catchment. Map BV19. Grid Ref: E1465770/ N5249140 (BV19 658 491). Altitude 1105m. Campbell Biv is located at the scrubline on the Campbell Range on the TR of the Arahura valley. It is tucked in under a scrubby knoll on a spur that divides two large unnamed side-creeks and has a panoramic view out over Styx Saddle, and of the Newton and Browning Ranges. It is one of the least-visited huts on this site. A DOC fly-in hut check in 1996 found a roll of toilet paper that served as a hutbook with six visits recorded between 1974 and then. There was no sign of any further visits when I made my first trip there in 2001. An unopened NZFS food-drop under the bunk had its decaying contents wrapped in 1974 editions of the Hokitika Guardian. There was one tin of sardines still savable. On my next visit in 2004 I found my route notes from 2001 lying undisturbed on the cooking bench. Apart from a gap in 2010, visits to Campbell Biv have averaged around 2-3 per year since it was profiled on this website. In February 2021 someone (probably visiting) started a fire during a very dry patch that burned through a large patch of tussock and scrub around the Biv that needed to be put out by helicopters.

Access
Campbell Biv can be accessed from the Styx or Arahura roadends. Up until 2017 there wasn't an official track up to it, and access was either via the tops, or by bush bashing up from the side-creeks on either side of the Biv site. I marked a route up a dry gut from the northern creek catchment in 2008. This included a short connecting track from the gut to the tussock. In 2017 Eigill Wahlberg got consent from DOC to put a proper track in on the TL of the gut to connect with the top portion I'd put in. This was completed in October. Currently the trackline is incorrectly marked on NZ Topomaps. It starts from the Arahura valley track between Styx Saddle and Mudflats Hut, about 10 minutes upvalley from Snowball Creek. There is a wooden sign with Campbell Biv on it and track down to the River. There is a good ford 100m downstream from where the track hits the riverbed. Cross and boulderhop up to the the big unnamed side-creek, then up the creek for 2-300m to a large orange marker on the TL. Don't be confused by the DOC stoat line that is marked with pink markers. A track leads from the orange marker up a broad spur, sidling into a dry gut at around 900m. The gut is followed for 10 minutes to a turnoff and short section of track that sidles East through the alpine scrub onto a ridge. Cairns lead up the ridge through patchy scrub to the base of a sloping rock face around 1080m. Waratahs lead West off the ridge and sidle across to the bench where the Biv is located. Allow 7-8 hours travel to Campbell Biv from the Styx road end, 2-3 hours from Mudflats Hut or 9-10 hours from the Arahura roadend. Note:  Fording the Arahura opposite the Campbell track start is only possible at normal or low flows. There is a cut, marked stoatline up the TR of the Arahura from Mudflats Hut that can used if the River is high, but this takes longer due to it climbing up and over a high river terrace.

There is an open patch next to the tarn by the Campbell Biv for helicopter access.

Type
Campbell Biv is a standard NZFS B49 design with flat iron roof and walls, and a single perspex window at the end. It was built by R.J. Courtney of Te Puke and K.W. Fisher of Nelson Creek on June the 5th and 6th 1958. Campbell was retrofitted with two raised wooden sleeping benches in November 1974 by Tony Newton, G. Stuart, and L. Bennett of the NZFS in Hokitika. A single mattress was dropped in during a DOC hut inspection. Water is from a small tarn 50m away and a bucket has been left next to the Biv to supplement this. There is no toilet.

Condition
Campbell Biv was still reasonably intact when I visited in 2001 despite having received no maintenance between 1974 and 2004. This is a tribute to the simple, effective B49 bivouac design. There were the ubiquitous leaking issues however and semi-permanent dampness by 2017 had created significant areas of rot in the frame, floor and sub-floor which is all untreated rimu. Paul Reid and Alan Jemison did some work on it in April 2017, replacing as much of the rotten bits as they could, but ran short of timber to do all that was required. In March 2019 Paul, Alan, Wade Phelps and Andre Winkelman returned and did a virtual rebuild. The iron cladding was removed at the entire frame lifted off. New piles were put in and new joists, bearers, installed atop them. The original tongue and groove floor had its rotten bits replaced and reinstalled. New wall framing was constructed and the old roof frame set atop using as many of the original bits as possible. The frame was enclosed in building wrap and iron cladding reattached. Silicone was applied to the laps, which were secured with hex-head screws. Flashings were made for the door and window and the door was strengthened. A frame was made for the window sash with its perspex glazing and fitted into the Biv. The iron cladding was rust-proofed, primed and painted. The cooking bench and bunks were reinstalled and a concrete step was poured. Some waratahs were placed on the sidle across the tussock faces from the top end of the track. The Biv was in good condition when visited in February 2020 and there had been no visits since the maintenance was done. There was a little bit of water staining on the timber on the back wall which may have been internal condensation or caused in winter when built up snow seeps in. A fire started by persons unknown in autumn 2021 just about took the Biv out and burned a large swath of adjacent tussock and scrub before helicopters extinguished it. It has reportedly blistered some of the paint and melted the building paper on the SW wall.

Routes
There is a reasonably good high-level route to Campbell Biv from Harman Creek Hut in the head of the Arahura. Head up the Browning Pass track from Harman Hut and drop into the Arahura at the first open side-creek. Cross the River and climb up a small side-creek that comes in on the TL at E1463625/ N5246428 (BV19 636 464). The creek is a natural staircase, a series of small cataracts. Exit the creek up a gut on its TR about 2/3 of the way up and climb onto the tussock bench above. Sidle from here up and around to the upper basin of Sphinx Creek taking care to stay above the large waterfall at its lip. Exit the basin up a small side-creek that enters on the TR just below where the main creek forks. Climb out of the side-creek and up a dry gut on the TR near its top. This provides access onto a side-spur that leads to the main spur dividing Sphinx Creek and the unnamed creek catchment South of the Biv. Drop into the the upper basin of this creek and sidle across some scree slopes onto the Biv ridge. The Biv doesn't come into view until you are about 100m above it. Allow 4-5 hours from Harman Hut to Campbell Biv in good conditions.

The Campbell Range NE of the Biv can be accessed directly up the spur behind the Biv until an obvious tussock gully which leads 100m down to more thick tussock on the flanks of the spur. Sidle these flanks into the stream and climb easy slopes up the other side. Further North on these slopes is a very pleasant bench at 1420m with shallow tarns, sheltering rocks and good camping. Above this bench, an easy slope leads up to a crossing of the Campbell Range. On the Julia side of the range, there is a bench system that offers fast travel North through to point 1673. This bench system also appears to go south to Mt Axis. The views from this side are also an extra bonus compared with a high sidle staying on the Arahura side. From point 1673, there is an easy descent to the marked tarn, but for a high-level camp, there are more unmarked tarns just below. Further down at the bush-edge is the top end an old NZFS track (around E1477643/ N5250946 (BV19 676 509))that leads down to Mudflats Hut. This was recut and marked by Bruce McClelland et al in 2017.

Old Julia Hut in the Taipo valley can be accessed from the low point between points 1673m and 1682m on the Campbell Range. Drop from here onto the flat area at 1450m on the TL of the TL fork of Dexter Creek. Drop SE from here down a steep shingle scree between some bluffs into the unnamed side-creek below and follow this down to Julia Creek. Ford to the TR, and continue down the track for 15 minutes to the huts. Julia Creek can be tricky to ford after rain, so this is a fine-weather-only route. The Julia Creek track was recut in 2016.

Provisions on Site
Two Billies, a frypan, a bucket, an antique first aid kit, an aluminium wash basin, a small hammer, a small quantity of permolat, a broom, a spade, and a hand brush.
Powered by