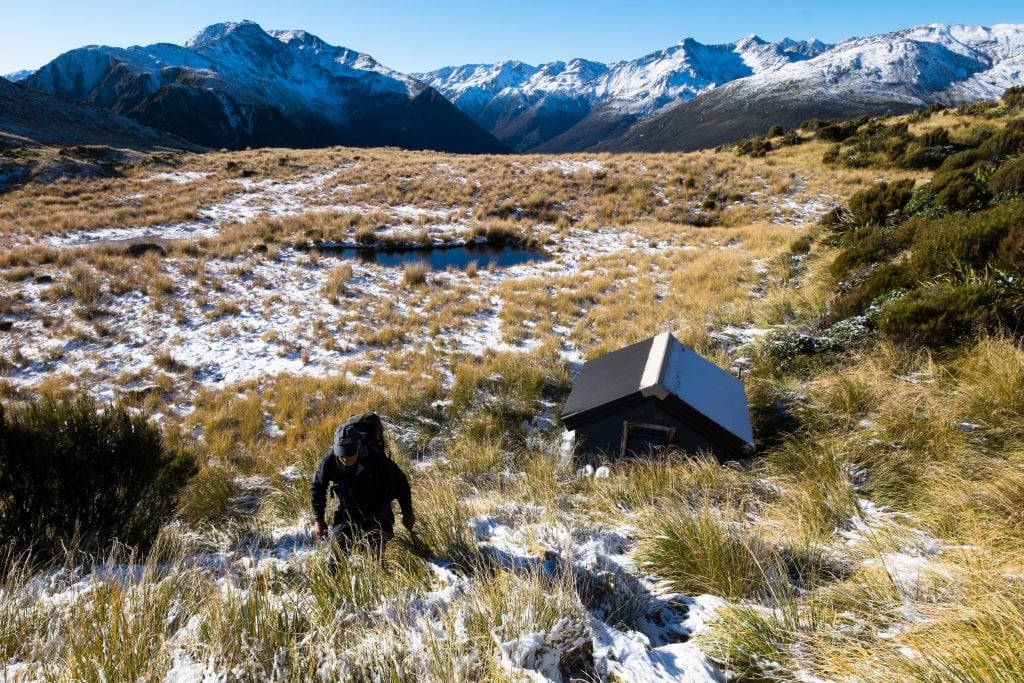 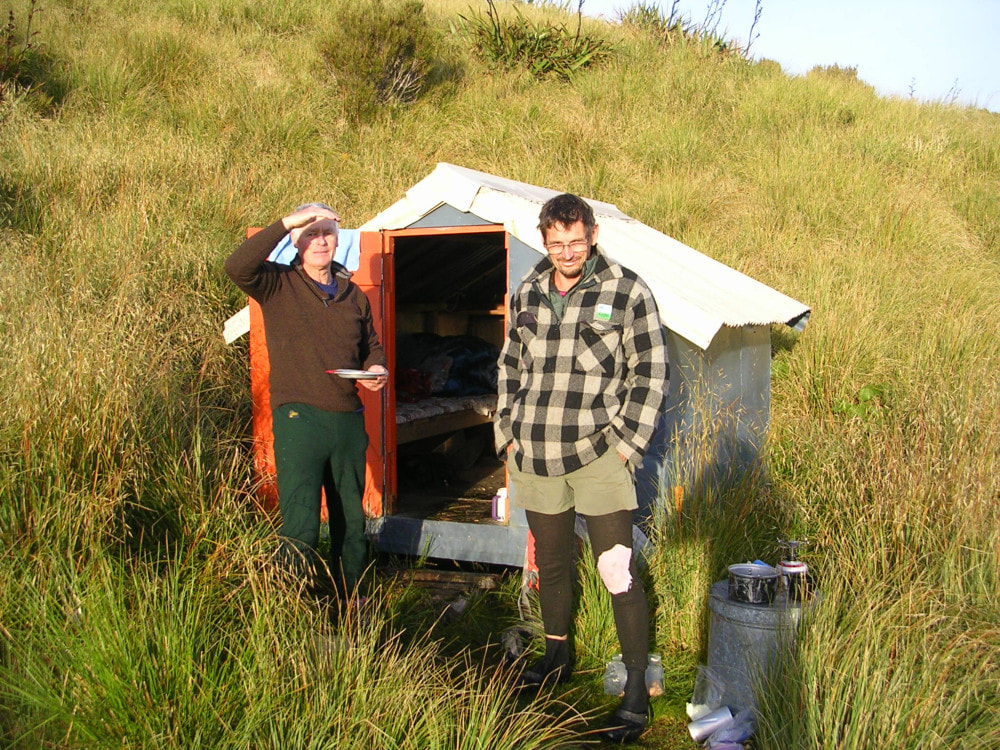 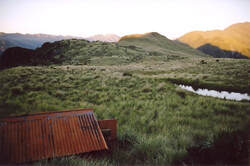 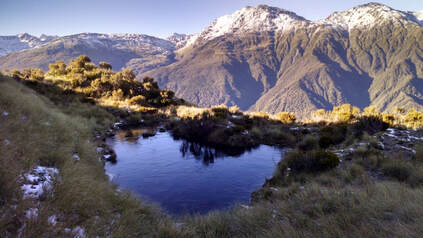 View over to the Browning Range from near Newton Biv: Photo Andrew Buglass 2015
Maintenance Status
When Newton Range Biv was designated as minimal maintenance by DOC in 2003, it hadn't had any work done on it since the 1970's, so was already pretty run-down. DOC did some one-off work in 2004, but it wasn't enough to prevent further slow deterioration. Permolat got interested in 2016 and Bruce McClelland from the Group, an ex-NZFS culler, and Chris Matheson of Ashburton carried out some repairs on it. A bit more work is still required on the Biv and the materials for this are on site. Bruce is currently applying for some BCT funding to complete the project. Newton Biv became isolated and difficult to get to after the NZFS access track from the Styx valley, last cut in the 1970's, vanished back into the scrub. For around 30 years visits to it were few and far between despite the its relative closeness to the Styx roadend. Permolat has since recut and marked the old track, and another from the Lower Arahura valley that provides access further along the Newton Range.

Location
Newton Biv is located on the crest of Newton Range between the Arahura and Styx catchments. Map BV19. Altitude 1155m. GPS Ref: E1458873/ N5251148 (BV19 589 511). It is sits hard up against a tussock rise at the edge of a large flat peaty area and has beautiful panoramic views of the Alps and coastal plains. The setting is serene and tranquil and there are numerous small, deep tarns and peat subsidences in the vicinity. Newton Biv is accessible in a day from the Styx roadend and visits have gone from one every 2-3 years to around 10 per year since it was profiled on the site and the track recut. There is also the odd fly-in hunting party.

Access
The route to Newton Biv starts from the Grassy Flats track in the Styx valley. The Styx valley route has suffered greatly from a series of extreme weather events in recent times and the old Browning Pass bench track on the TR has been taken out in a number of places. DOC initially closed the valley but have now reopened it advising trampers to go via the Mid Styx Hut route on the TL. This adds a good hour to the trip however it is possible and also quicker to cross back to the TR above Tyndall Creek and continue up the original trackline where it isn't washed out. If the River is very low it's possible to ford about 200m upstream from Tyndall Creek. Otherwise boulderhop upriver (with one shortish bush detour around some low bluffs) to a prominent bend about one kilometre above Tyndall Creek where the River flattens and widens. For those using the Mid Styx route the best ford back to the TR is currently is 500m upriver from the large unnamed side-creek where the track drops back to the River. Due to the fords, both routes are dry weather only.

The Newton Biv route starts 100m up the TR of the large unnamed side-creek situated 1/2 an hour below Grassy Flat Hut (E1458968/ N5249853, between stoat traps 197 and 196). The entrance is marked with a routered sign and the track goes directly up the ridge on the TR of the creek to around 960m, where it sidles East across some eroding faces in the creek's head. It then rejoins the ridge for the last short steep bit up through the alpine scrub. Once in the tussock, the route climb/ sidles in a NE direction onto the crest of the Range. There is the odd bit of cruise tape on the scattered shrubs marking this trajectory. Once on the crest its an easy amble East along to where the Biv is located. It is tucked in against the bank at the western edge of a large flat peaty area and easy to walk past. Allow 6-8 hours currently to reach Newton Biv from the Styx roadend. Permolat volunteers have kept the track in reasonably good shape. 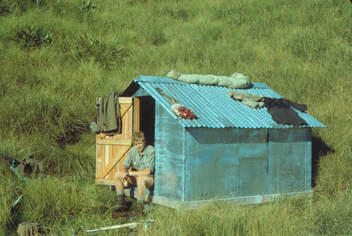 Newton Biv just after it was built - Photo Dave Richardson
Type
Newton Biv is a standard NZFS B55 two-person design built in 1962. It has a corrugated iron roof, a single louvre window at the back end, two narrow wooden sleeping benches (one small thin mattress), and a low cooking bench. Use the tarn closest to the Biv for water and the more distant ones for washing or swimming. There is no toilet. Please don't crap around the Biv as the water table is high and could feed into the tarn used for drinking.

Condition
The Biv was repiled and had its bearers, and some of the joists, framing, and floor replaced by DOC in 2004. It was re-roofed by Bruce and Chris in March 2016 with the addition an inner layer of chicken wire and roofing wrap to improve weatherproofing. The paint has flaked off the exterior wall cladding, and the window frame and sill, louvre brackets have some external rust. There is a damp floor plate at the back end, possibly due to a poor window flashing. It may also be water blowing through the louvre panes, or snow melt seeping in. There is a possible issue with rot at the base of the door frame.

Routes
The Newton Range is traversable along its length but dips into the alpine scrub zone at a couple of points both East and West of the Biv, and travel is rough in these places. East of point 1190m there are several ups and downs through the alpine scrub before the Range rises back above the tussock line. A rough trail leads through the scrubby parts. There is a small cirque with two tarns and some good campsites at Pt. 1264 and it is open and relatively easy travel along the remainder of the Range to Mt. Newton.

Access down to Lower Arahura Hut is possible using an old NZFS track opened up by Permolat volunteers in 2013. The route was re-trimmed to 600m by Andre Winkelman in February 2020.  Flax has started crowding the track in the alpine scrub zone. Nina Dickerhof and James Thornton  gave this section a light trim in 2022. There is a stake with permolat on the crest of the Range just above the big tarns and below this on the Arahura side is a cairn at E1461437/ N5251992 (BV19 614 520). More stakes lead down a steep face with patchy scrub to the top entrance of the track, which drops down a scrub face onto a narrow rib, then across and down some bluffy bush faces in the montane zone and onto a more defined ridge. The track follows this down to the Arahura valley intersecting the main valley track 200m downriver from Lower Arahura Hut. . This route is very steep in places and the top section of track is incorrectly marked on the topo map. The actual trackline veers SW at the 720m contour instead of continuing straight up as marked, and connects with the crest of the Range midway between Pts. 1264 and 1392m. Allow four hours from Newton Biv to Lower Arahura Hut, or 5-6 if coming from the opposite direction.

It is possible to access Mudflats Hut from Newton Biv over the top of Mt. Newton and down Visitors Creek. There are some nice tarns and camping spots in the top basin of Visitors Creek, but below this the Creek drops over a waterfall and down through a slotted gorge. The fall can be skirted on the TL lip of the basin down the TL of a steep gut with a small waterfall near its top. The gut enters the main Creek at the bottom of the gorge. Below this the going is steep, rough and slippery, the middle of the Creek needs wading in places. There may be easier routes off Mt. Newton using one of the side creeks upstream from Mudflats, but these still need checking out. Allow 6-8 hours for the journey from Newton Biv to Mudflats Hut.

There is also access off the SW ridge of Mt. Newton onto Styx Saddle. The route down is via some well-used deer trails through a narrow band of scrub onto an open slip that takes you down onto the Browning Pass track. 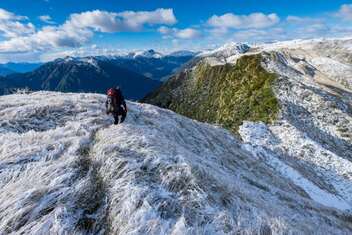 Newton Range heading East towards Pt. 1336m: Photo Jo Stilwell 2018
The Newton Range is West of the Biv has been traversed more regularly since Mt. Brown Hut was built. The route is rough going in places with numerous ups and downs, but is well worth it in terms of the views it provides. From the Biv along to point 1240m is relatively easy. After this the Range dips steeply down through a band of scrub, then climbs up onto point 1330m, passing some interesting ultramafic rock outcrops on the way. There are some nice tarns just West of point 1330m. After 1240m the Range drops steeply into the alpine scrub zone, and while there is a trail of sorts along or near the crest, the going is rough. The open tussock is not reached again until the 1140m mark on Mt. Brown's eastern ridge. People are taking on average 7-10 hours to do this traverse according to the Biv's hutbook.

Repairs needed
The Biv's exterior walls and the window frames need repainting. The rear window may need some flashing repairs or modifications. the patch of rot at the base of the door frame needs checking out and fixing. Some stakes have been flown in and will be used to mark the route through the tussock from the top of the access track.