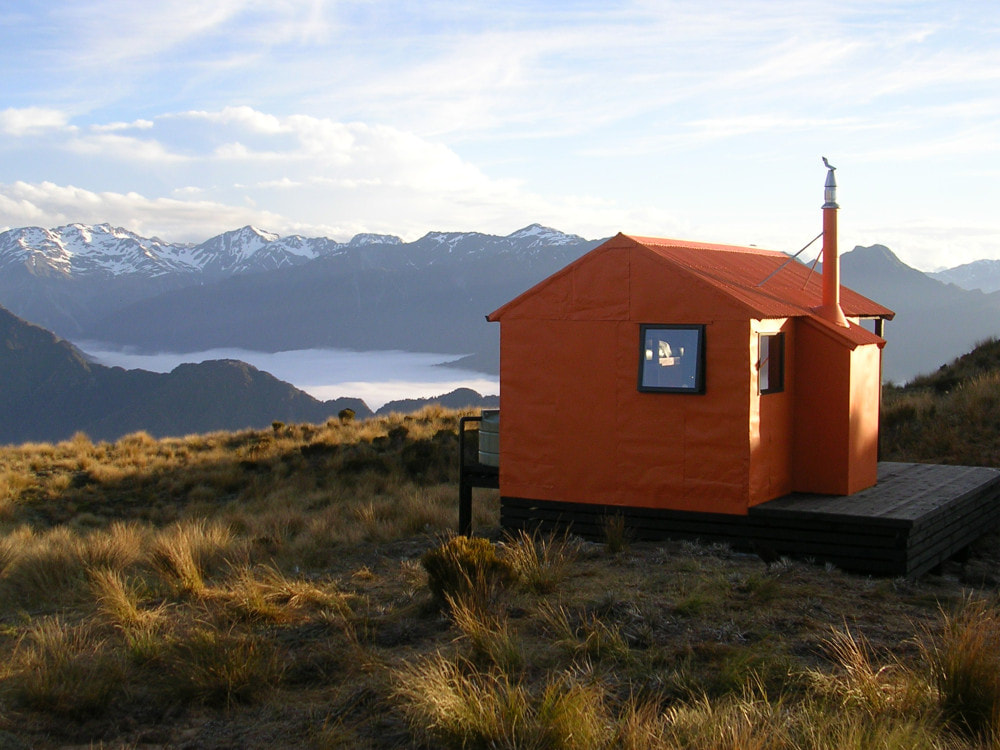 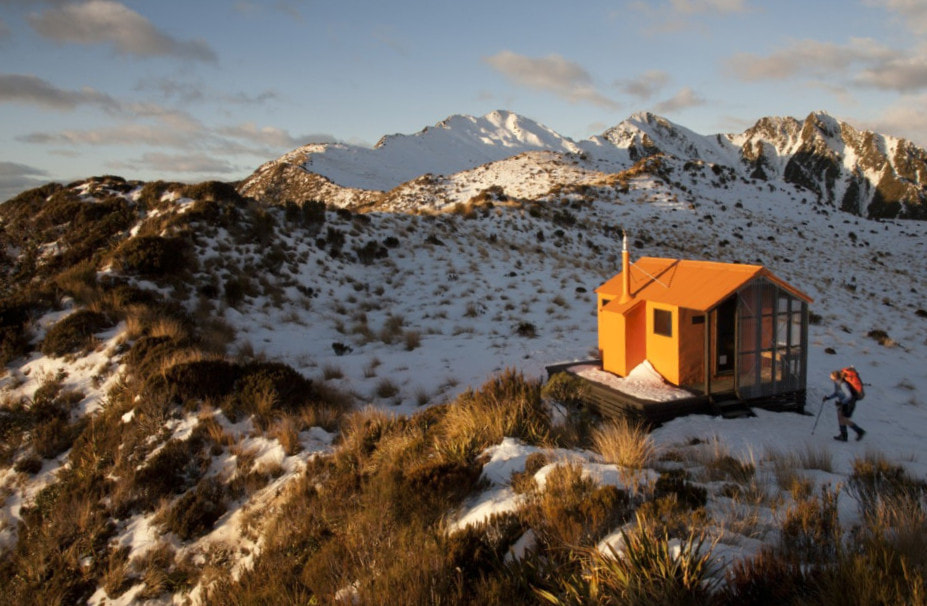 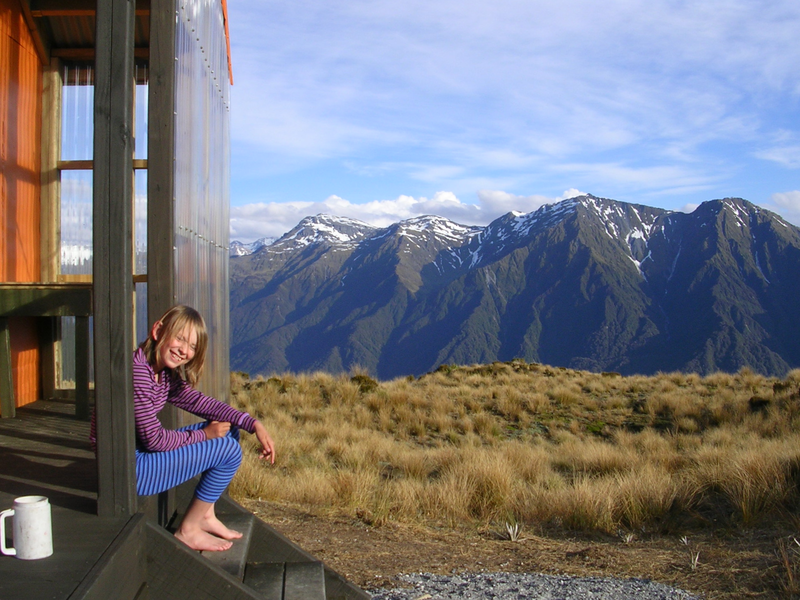 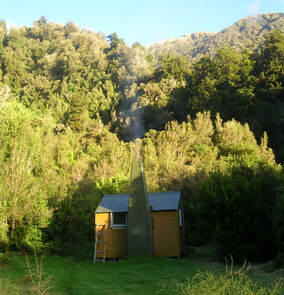 Mt. Brown before its reassignment - Photo Andrew Buglass
Maintenance Status
Mt. Brown Hut is a community initiative undertaken by Eddie Newman and Julia Bradshaw of Hokitika. The Hut began its life as Lower Arahura Hut in the valley of the same name, where it spent its first 50 years. It was a standard NZFS 4-bunk S81 design, built in 1962. When DOC decided to build a new Hut at the site in 2010, Eddie and Julia were able to convince them to fly the dismantled sections of the old hut out to be reassembled on Mt. Brown. The project ended up becoming a total rebuild due to the plethora of building code and safety requirements that didn't exist in the 1960's when the Hut was built. Considerable community input, volunteer labour and donations made it possible for the project to reach fruition. The Permolat Group contributed financially and with volunteer input and the Hut was opened for public use in November 2010. It was an instant success, debuting in Wilderness Magazine, outdoor calendars, DOC posters, and the cover of "Shelter From The Storm," a book on high-country huts by Rob Brown, Geoff Spearpoint and Shaun Barnett. The Hut is now profiled on local tourist brochures and i-Sites and the majority of visitors in recent times, at least up until Covid, were foreign tourists or travellers.

In 2017 Eddie and Julia emigrated to Christchurch and delegated oversight of the Hut to the Permolat Group. Hugh van Noorden from the Permolat Trust has kindly taken on the lead role for the the project and the Trust continues to hold and administer donations for the running of Hut. Unfortunately, income generated from visitor donations from this increasingly popular tourist destination is no longer sufficient to cover basic servicing and maintenance needs. The Hut is too small for the high numbers, the long drop toilet system isn’t coping, the top end of the track continues to deteriorate, and flying tons of coal up for the stove is no longer desirable and we’ve decided to stop doing it. Realistically speaking, the Hut needs to be given over to DOC, possibly replaced by a larger structure, and serviced by the Department.

Mt. Brown Hut has no fixed fee system and is reliant on koha (donations) for its upkeep. Koha means a contribution, not just donate-if-you-feel-like-it. Sadly, the majority of visitors are not donating, nor are significant number logging their visit in the hutbook. This Hut is not DOC funded so please don't be a freeluncher. Donations are payable to Permolat Trust, Kiwibank, 38-9016-0266330-00. Our Charities Registration No. is CC50626. Please specify that the donation is for Mt. Brown so we can earmark it for that purpose.

Location
Styx catchment. Map BV19. Grid Ref: E1452950/ N5252150 (BV19 530 522). Altitude 1120m. Mt. Brown Hut is located above the bushline on the West ridge of Mt. Brown, which is an outlier of the Newton Range. Access up to it is straightforward in most weather and on clear days there are fabulous views of the Southern Alps, Lake Kaniere, and the coastal plain.
Access
There are two routes up to the Hut providing an overnight loop for those interested. The most direct and frequently used is from Geologist Creek on the Dorothy Falls Road that goes around the back of Lake Kaniere. The track starts at a washed-out parking area on the South side of the Geologist Creek Bridge. It is generally well marked, but is getting very boggy in places through high use, particularly the sub-alpine section. In April 2019 some diversion channels were installed above the bushline to stop water running down and eroding the trail. Work was also done on some of the boggy areas of track on a flat section of ridge around 900m altitude. Some clearance of flax, toi toi and seedling regrowth was done in conjunction with this.

The track leads from Geologist Creek across the foot of the hill, climbing gently through hardwood forest to a small creek. This is crossed and its TL followed up for a bit, then the trail veers South and climbs steeply up the bush faces onto the SW spur of Mt. Brown. The spur levels for a bit in the sub-alpine zone and then ascends in a series of steps through the scrub to the tussock. There is a small tarn on the Styx side of the ridge just before the tussock is reached. There are a few patches of onga onga (bush nettle) in the mid-section that are starting to encroach on the trail. The route is poled from the scrubline to the Hut. There is one section in the tussock zone without any wooden channels where some track scouring is occurring. Allow 3-4 hours from the start of the track to the Hut depending on fitness.

The other approach to the Hut is from the Styx valley and starts at the large unnamed side-creek known locally as Mt. Brown Creek. Access up the Styx valley is along a rough farm trail that turns off the Dorothy Falls Road at sharp bend 400m North of the Mark Wallace Bridge. The trail, only useable for a few hundred metres due to flood damage, ends after 1.5 kilometres and the Styx riverbed is followed for a couple of hundred metres under some large shingle bluffs. These can usually be waded around at normal flows, but could be difficult or impossible if the River was up. Mt. Brown Creek is five minutes upriver from the bluffs and the Mt. Brown track starts 20m up its TL. The track follows the spur up onto a bush terrace, then climbs up a broad bush face onto the Southern spur of Mt. Brown. The spur flattens at 800m and the track continues up to around 1000m, crosses a sub-alpine gully, then resumes its climb up through the scrub towards the tussock line. Snow poles lead up the last portion of the spur through scattered scrub onto a flat tussock bench with a small tarn just below the Hut. Glenn Johnston and John Hutt have been in a couple of times to work on the track this year. Allow around four hours currently from the Styx bluffs to Mt. Brown Hut. Those doing the circuit have a three kilometre walk along the Dorothy Falls Road between carparks.

Type
Transitioning a standard 4-bunk FS design with an open fire to an alpine setting required numerous modifications to meet a host building code and DOC safety standards that didn't exist in 1962. An alcove with a small coal-burning stove replaced the chimney, the original louvre windows were replaced with double-glazed ones, and an extra side window added. The bunks were modified from stand-alone to single upper and lower platforms, an aluminium roof flashing was added to protect kea from lead poisoning (although it hasn't stopped them picking away at it), along with a porch, a deck, a roof-fed water tank, and an outside sink bench.
The Hut has been strengthened to withstand 250kmph winds without tie-downs There are 4.5 tons of concrete in the foundations and the hold-down fastenings are in excess of safety requirements. The Hut is lined with 12mm plywood and the floors are 10mm ply on top of the original rimu tongue and groove. The ceiling lining covers a 300 x 100mm ridge, fastened by 16mm bolts at each end. The framing is fastened with hold-down straps, and the wall studs are at 400mm centres with 25x1x400mm hold-down straps, top and bottom. Hurricane clips were added to the clearlight on the porch six months after the Hut was opened, because it was flexing and tearing around the nails in the high winds. The water tank tap freezes regularly overnight in winter, so fill your water containers before you go to bed. If the tank runs dry the water in the tarns on the bench below the Hut is potable.

Condition
Mt. Brown Hut is in excellent condition structurally, however the high visitor numbers have impacted on toilet, fuel supply, and track. We stopped flying coal for the stove because it was being rapidly used up by day trippers and overnighters alike. 200kg was consumed over a two-month period over the 2019 winter and people then took to burning green alpine scrub from around the Hut and ripping pages out of the hutbook to light the fire. A diagonal brace from the toilet door has had to be replaced twice, obviously having been used for the same purposes. If you want to operate the burner you will need to carry up your own fuel up. ​A bit of graffiti has started appearing on the Hut walls.

A working bee in April 2019 saw the Hut completely repainted inside and out, and the deck stained. The glass pane in the stove is broken, and so currently can’t be properly damped and moisture entering via the flue is causing the burner to rust quite badly. The original toilet hole proved inadequate and Hugh and some friends dug a new toilet hole and moved the toilet over to it in November 2018. The toilet was in pretty bad shape and the hole full by early 2020, and a new one was flown in and erected by volunteers in September. Water had been pooling in the depression in front of the Hut, extending in under the veranda. A notch was cut through the ridge to drain this in September 2020, however the depression is likely to remain pretty boggy for a while. 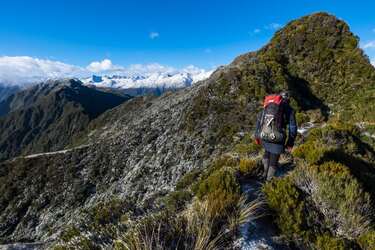 Newton Range heading East towards Pt. 1240m: Photo Jo Stilwell 2018
Routes
A traverse the Newton Range from Mt. Brown to Newton Range Biv is a great and scenic option for fitter, more experienced types. The is rough and undulating and dips well into the alpine scrub zone just East of Mt. Brown. A rough trail exists on the scrubbier bits, however there are quite a few ups and downs before a steep uphill section that leads to point 1240m. One more scrubby knoll needs traversing after this in order to reach open tussock. There are some nice tarns just before point 1336m and some interesting ultramafic rock outcrops on its eastern flank. The Range dips again after point 1336m and this is followed by a short steep climb over point 1240m after which the terrain flattens. Newton Biv is tucked against a tussock bank at the western edge of a flat peaty bench with tarns (around E1458757/ N5251170 (BV19 588 512)), and would be quite easy to walk past in claggy conditions. People are taking on average 7-10 hours to do this traverse according to the Biv's hutbook. It is rumoured that DOC may be interested in cutting and maintaining the scrub sections of this route.

Repairs needed
We've decided to remove the burner at some point given that we’ve stopped flying coal in, and due to the absence of a natural fuel source at that altitude. In the meantime, people are being encouraged to carry their own fuel up. A longer-term solution for the toilet needs to be sorted out as we can’t go on digging holes around the place. These fill rapidly because of high use, and the peaty nature of the surrounds and high water-table are not a particularly hygienic option. A removable container seems the way to go, but the high costs of flying these in and out are way beyond our budgetary means.

The track from Geologist Creek needs a bit of windthrow clearance at the bottom end, and a good trim in the alpine scrub zone on the bits that weren’t cut in the 2019 working bee. There is one bog at 950m that needs boardwalking and a bit more drain boxing on the section that is scouring in the tussock zone.

Provisions on site
A kettle, a coal bucket and two shovels, a poker, and a broom. There is an aluminium ladder under the hut.
Powered by