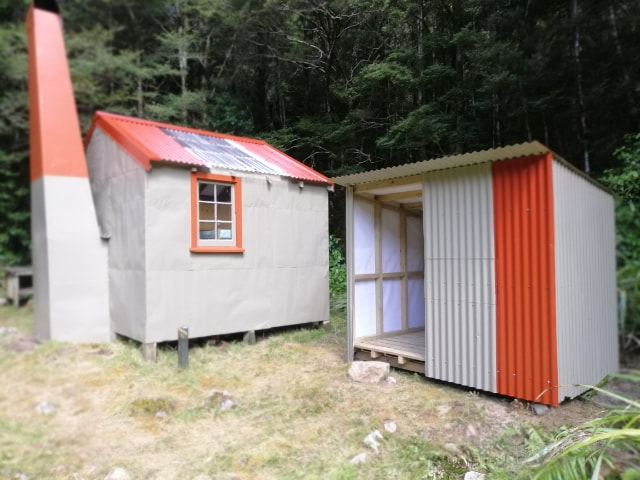 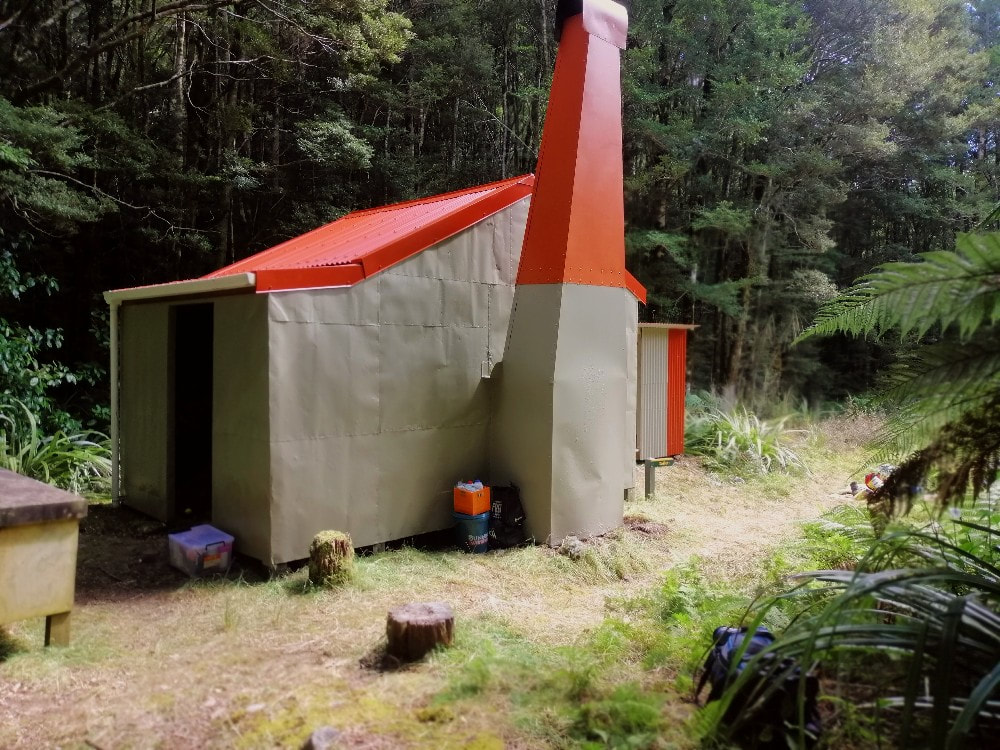 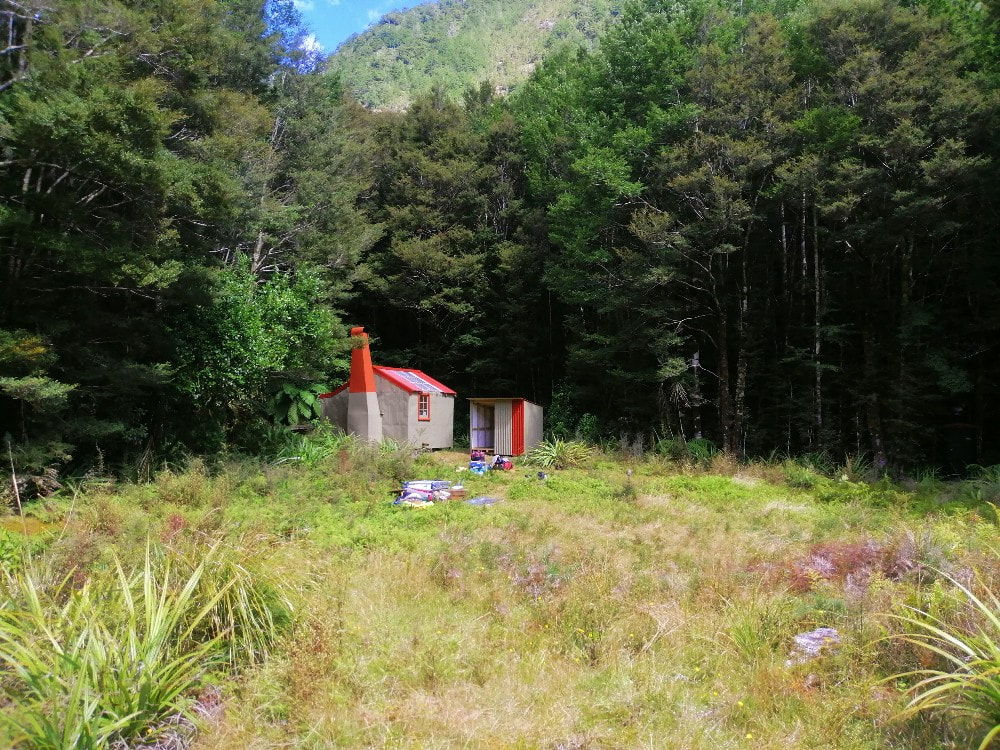 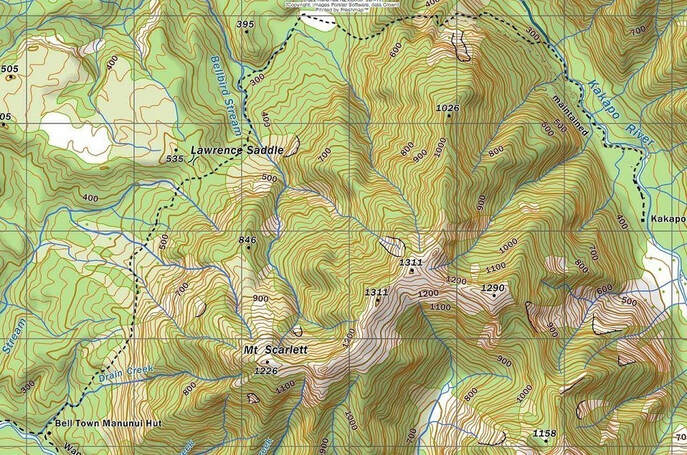 Maintenance Status
DOC ceased maintenance on Kakapo Hut in 2004, then back-tracked due to local protests. By 2012 they still hadn't done anything and so Jason Campbell of Permolat who also worked for DOC, lobbied his employer to support a volunteer project. This took place in 2013. with DOC supplying materials. 2022 was another good year for Kakapo with the BCT using some of its Kaimahi For Nature funds to get an Ultimate Descents team to re-roof and seal the Hut.

The access tracks into the Kakapo valley were not maintained for many years, became very overgrown, and in many places had vanished or been buried under cyclone windthrow. Visits to the Hut were mostly fly-in ones, with foot visits few and far between. Louisa Hines and Hayden Miller did some great work initially, opening things up from the Little Wanganui to Lawrence Saddle. Andrew Barker of Permolat did some trimming and taping up to the saddle between Bellbird Stream and the Kakapo in September2021. In February this year he took a crew in to finish the route off making use of a back flight on a machine working on the BCT Belltown/ Mananui hut shifting project.

Location
Karamea Catchment. Grid Ref: E1541722/ N5424106 (BQ23 417 241). Topo Map BQ23. Altitude 360m. Kakapo Hut is located midway up the TL of the Kakapo River, which is a major tributary of the Karamea River. The Hut was averaging around one visit per year during the 1990's and early 00's, probably due to the lack of extant tracks. There was brief surge in 2009 when six parties visited. Since the 2013 visits have been limited to DOC predator control, and the odd tramping group. The maintenance team in March 22 were very impressed by the variety of birdlife around the hut, including kaka, whio, and kiwi calling at night.
Access
Most of the track to Kakapo Hut is not yet marked on NZ topo maps. The section in the Kakapo valley that is marked is not an accurate line. The track starts at the old Belltown/ Manunui hut site at Drain Creek. It follows the TL of the Creek up to the first side-creek on the TL. It follows the TL of this side-creek to when it bends to the NE, crosses to the TR, then follows a shallow gut for about 700m before crossing a spur and sidling around to Lawrence Saddle. The track then drops directly from the Saddle into the TL branch of Bellbird Stream and follows it down to a point about 250m above where it forks. It  cuts across the "v" of the forks into the TR branch and follows this up to where it veers ESE.

The track leaves the Stream here and heads NE to the western end of a large wet clearing.. Head down to the clearing's eastern end from where the track heads ESE before turning NE and climbing to the saddle overlooking the Kakapo River. It drops about 100m down from the saddle, then regains that height with a steep sidle to the next ridge. Drop off the ridge and sidle in an easterly direction with the track meandering between rocky earthquake slips, eventually reaching the end of a short spur. Drop directly down the face here for about 80m, cross a gut, and continue sidling at around the 370m contour for 500m. From here the track drops down the edge of a shallow gut to join a trapline track about 2km below kakapo hut. (E1540775/ N5425765). This is followed to the Hut. Allow two hours from Belltown/ Mananui to Lawrence Saddle, another two to the unnamed saddle, and two from here to Kakapo Hut. There is still some permolatting needed on the section between the two saddles. 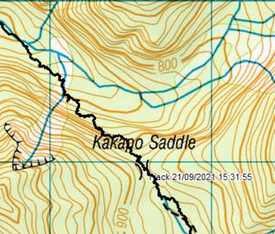 GPS line taken on descent from Kakapo Saddle
The other route to Kakapo Hut is from the Wangapeka valley via Kakapo Saddle. An old track up to the Saddle starts behind the Herbert Creek sign and was last trimmed in 2015. The track ends at the Saddle from where the best descent option is reportedly in a NW direction along a bench above some bluffs. This descends diagonally towards the valley floor crossing the bottom end of the big earthquake slip marked on the map and staying above some dense beech regrowth closer to the River. Andrew Barker intends to do some serious opening up of this route later this year. This will include cutting and marking up from the Kakapo riverbed to the Saddle.

The route down the upper Kakapo is mostly via the riverbed with more terrace travel further down. DOC Predator control lines with pink markers run through the bush on both sides of the River upstream of the Hut, and can be followed to it. The trail on the TL is straightforward except for one or two places where the river has taken it out. Allow 7+ hours to Kakapo from either Taipo Hut, Helicopter Flat, or the mid-Karamea huts.

There is a helipad near the Hut. 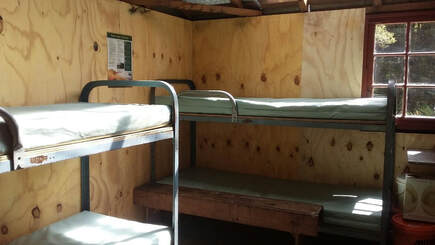 Refurbished Hut interior 2022
Type
Kakapo Hut is an unlined four-bunker with an open fire and a single four-pane window, built in 1958 by the Nelson NZFS. This design was characteristic of the early Nelson Huts and predates the standard NZFS S81 four-bunk design that eventually became the high-country standard. Only a small number of this type of hut were built, the only other remaining one being Johnson Hut in the Mokihinui catchment. Kakapo's materials were brought in by helicopter, one of the earliest uses of this type of machine by the NZFS (the first was Luna Hut). The Hut's door has carved in it the names and dates of cullers and trampers back as far as 1962.

​Condition
Kakapo Hut is in very good condition now. In 2013 Jason's crew repainted the exterior, replaced the rusted chimney guttering, patched the chimney's rust holes, and replaced and painted the rotten window framing. A new new hearth surround was constructed and wall studs, rotting floorboard sections, a pile and a bearer were replaced. The toilet was shifted. The historic features such as names and old carved graffiti were left untouched. In March 2022 Pete Sinclair, Pete Braggins, and Marc Lesaicherre re-roofed the Hut, tidied up the inside, and built a woodshed. Sometime in the next few months a team is going to get in and cut back the regrowth around the Hut. When this happens there will be about 20 years worth of firewood.. 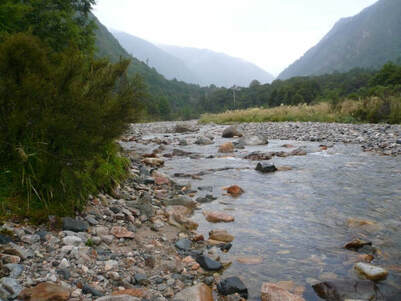 The upper Kakapo looking downriver: Photo Phillip Collyns 2009
Routes
DOC predator lines where they exist provide a means of travel on the Kakapo valley floor. There is mention in the hutbook at Greys Hut of an old track up the TL of the Karamea from the Kakapo confluence to opposite Greys (the book goes back to 1987). This would not have been maintained since the 1970's and there is no recent information is on hand concerning this route.

Provisions on site
A broom, a dust pan and shovel, a washing bowl, and maybe an axe.
Powered by