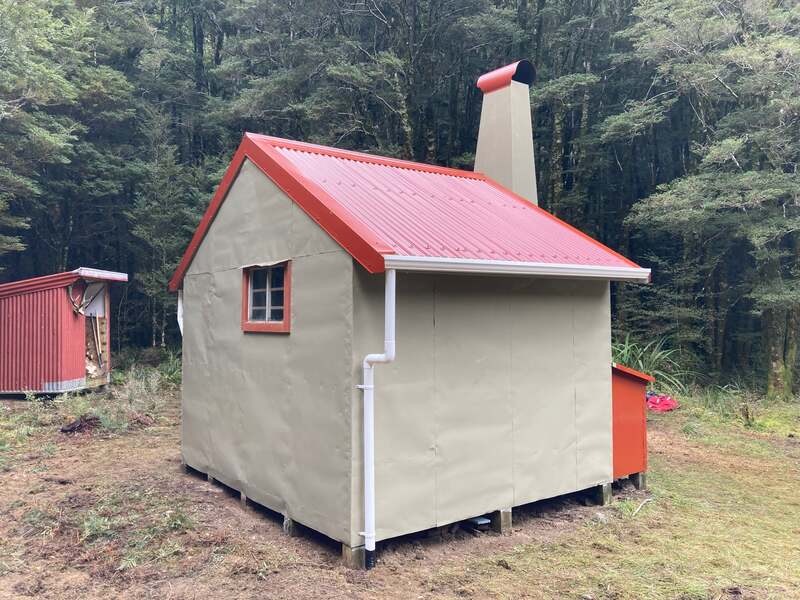 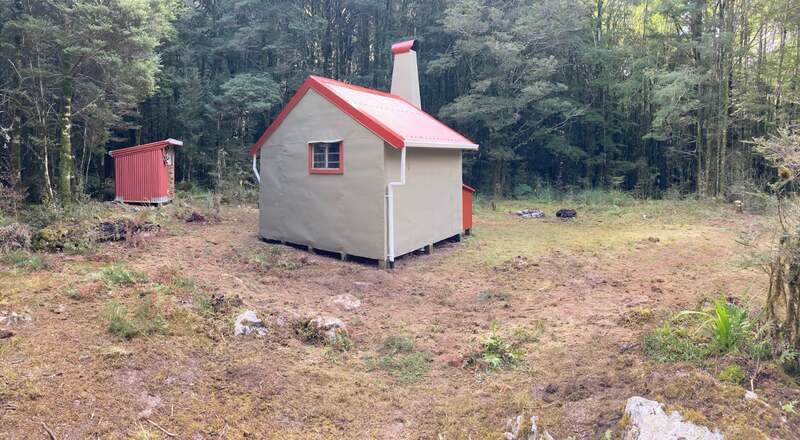 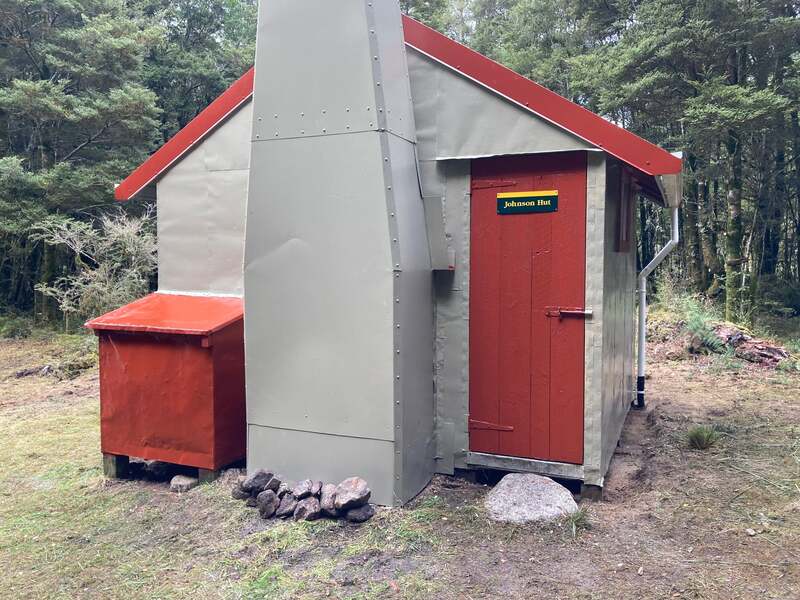 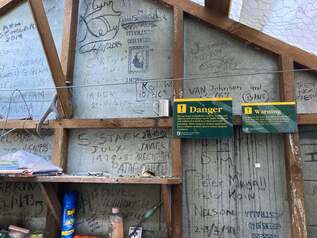 Johnson Hut interior. Plenty of history there among the humourless warning signs.
Maintenance Status
Johnson hut is included in the general maintenance agreement Permolat has with DOC for a number of remote huts and tracks in Westland. The Johnson valley is zoned as "remote experience," meaning existing facilities may be maintained, but not necessarily replaced. The access tracks haven't been actively maintained for many years. In the autumn of 2015 Jason Campbell and Mayer Levy of Permolat, and Bruce Polkinghorn, went in did some repairs, painting, and scrub clearance around the Hut. A number of structural issues weren't addressed and in 2022 the Back Country Trust used some Kaimahi For Nature funds to send a team in and do some significant maintenance and site clearance.

Location
Mokihinui catchment. Map BQ22. Grid Ref: E1539566/ N5409093 (BQ22 396 091). Altitude 392m. Johnson Hut is situated on the TR of the Johnson River, 1.7 km above its confluence with the North Branch of the Mokihinui River. The Hut is 70m further West from the River than marked on the topo map in a small clearing surrounded by scattered regenerating silver beech which merges with taller forest North of the Hut. Johnson Hut gets around around five fly-in parties and two walk-ins per year. The fly-ins are mainly for trout fishing, and the rest for deer, or goat hunting. The Hut is in a site that does not get much sun in winter

Access
The Johnson River lies on an historic mining/ prospecting route that linked the Wangapeka and Lyell pack tracks. The original blazed tracks were severely damaged by the 1929 earthquake and never repaired to their original standard. By 1979 the track from Piano Creek in the Little Wanganui River over Kiwi Saddle had become overgrown. It's unlikely that there has been any official track maintenance since then although some informal marking and cutting has been done from time to time. The original trackline is still marked on current Topo maps and while it can be followed in most places, it is generally quicker to make your own route.
The Johnson Hut route commences on the TR of Piano Creek just up from its junction with the Little Wanganui River. It climbs up onto the terrace and sidles above the River through quite a bit of windthrow most of which can be avoided by sidling on the uphill side. Alternately, continue along the the Wangapeka Track until about 50m West of the Kiwi Creek confluence and head up the Creek. Travel up the Creek is a mix of bush and stream travel with the last section to Kiwi Saddle on the TR.

There is a side-track that goes West from the Saddle past a clearing with great views, and continues up Silver Creek. The main Johnson valley track drops from the Saddle through boggy scrub into Silver Creek following an old blazed on the TL. It is also possible to climb East and circle above the scrub through open bush before dropping to the track. The track follows the TR of the Johnson and is reasonable travel, albeit rough underfoot in places. An impressive gorge is bypassed upstream of Fugel Creek after which it is fairly easy river travel, with the odd bush detour where trees have collapsed into the water. The old trackline is not well marked except for a short permolatted section around a small gorge. The track below Little Fugel Creek is scrubby and boggy and it is easier to stick to the River. A sign on the riverbed marks the track up to the Hut which crosses a grassy clearing on the way. Allow two days from the Little Wanganui roadend to Johnson Hut; 2.5 hours from the roadend to Bell Town Hut, 3.5 hours from here to Kiwi Saddle, 1.5 hours to Fugel Creek, and four for the remainder to Johnson Hut. The Return trip is a bit quicker.

There is a helipad East of the hut on the grassy clearing near the River.

Type
Johnson Hut is an unlined four-bunker with an open fire built in 1957 by the NZFS Nelson Conservancy. The materials were air-dropped by a Beaver plane. The Hut predates the S81 design that later became the standard and there were only small number of this type built. The only other remaining example is Kakapo Hut in the Karamea catchment. Johnson Hut's single four-pane window, a characteristic of the early Nelson Conservancy huts, was replaced in the 2015 maintenance. The Hut also had a skylight retrofitted at some stage. Its interior is plastered with visitor names dating back to 1967.

Condition
In 2015 Jason and his crew painted the Hut exterior, installed pane glass windows and did some fireplace repairs. In 2022 Tim Marshall's team which included Ollie Clifton from BCT installed some drainage and cleared back the vegetation around the Hut, did some more fireplace repairs, re-roofed the hut, and built a new woodshed. They also rebuilt the front door and repaired the outside of the chimney. The Hut should be good to go for a few more decades. 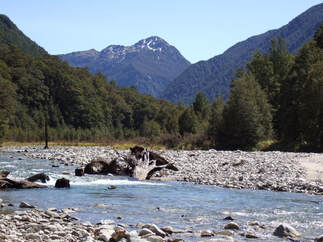 The Johnson River downstream from the Hut - Photo Glenn Johnston 2010
Routes
Johnson Hut can be accessed from Mokihinui roadend via the Mokihinui and Hemphill rivers and Johnson Ridge. This is an untracked route which takes around three days. Day one takes you to the Mokihinui Forks and a second fairly long day to Lake Phyllis or Marina. From The lakes it is around seven hours up and over Johnson Ridge to the Hut. According to Dave Pratt, anyone attempting this route should have a fondness for subalpine scrub, but adds that the Hemphill River is a joy, with a feeling of remoteness second to none.

Johnson Hut can also be accessed via the North Branch of the Mokihinui, a difficult route that can only be done when River flows are very low. Numerous crossings are required in the gorge, including a two-jump crossing using a rock in the middle of a deep channel that could be difficult with a heavy pack.

Repairs needed
Shouldn't be any at the moment.

Provisions On Site
Four mattresses, two aluminium basins, a plastic bucket, a broom, a hearth brush and shovel, a small hand saw, an axe, a billy, a frypan, a small paint brush, and a quantity of paint.
Powered by