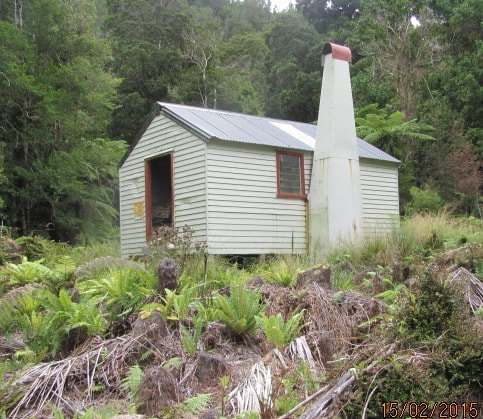 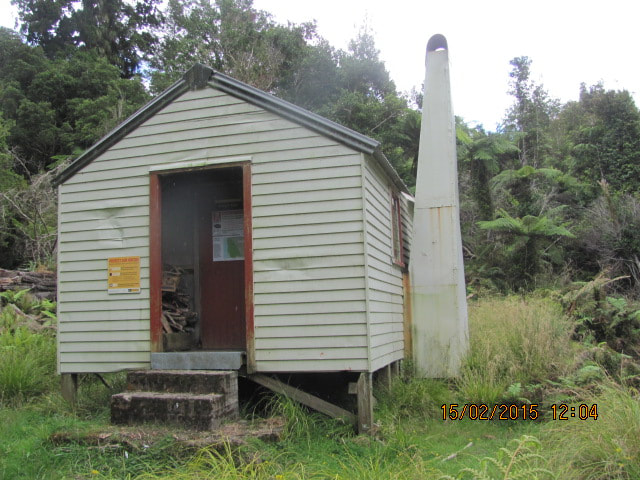 Maintenance Status
DOC Karamea are supposedly looking after Greys Hut, but their input had been pretty intermittent for a number of years. Jason Campbell, Mayer Levy, Bruce Polkinghorn and Geoff Love did some maintenance and a bit of trackwork in 2016, then in May 2021 Davey Guppy from DOC Karamea and John Taylor from DOC Takaka went in and fixed up the hearth and fireplace.

Location
Karamea catchment. Map BQ22. Grid Ref: E1539304/ N5434543 (BQ22 393 345). Altitude 85m. Greys Hut is located on a bush terrace on the TR of the Karamea River, 1-2 hours walk upstream from the Karamea Gorge. Although inside the Kahurangi National Park boundary, it is fairly low-use hut, visited mainly by rafters, kayakers, and the odd hunter or angler. Over the last couple of years there have been increasing numbers of entries from kayaking parties, very few of which use the Hut overnight. Foot parties have been averaging 6-12 per year in recent times, a mix of fishers and trampers. The forest around the Hut is predominantly beech and hardwood.

Access
From Karamea township head 10kms up the TR bank of Karamea River along Umere Road to a small DOC car park just before Virgin Stream, and about 600m before a locked gate at the end of the legal road formation. The car park signage informs of a six hour walk to Greys hut. There is no distinct marked track from here. Head upstream along the river bank following the occasional orange triangle. The track line becomes more evident upstream of the cableway, and some 45 minutes it joins an old pack track formation at the back of the private land. This is followed several hundred metres to the river's edge. From this point on a track line is generally evident with sporadic orange triangles interspersed sections where it cuts back out to the river bank. The section through the gorge can be boulderhopped when flows are low. The Greys route requires sufficient experience to be able to pick up the transitions between river bed and tracked sections around bluffs. Most bush sections are reasonably clear and are cruise-tape between the sections marked with triangles. The cruise-taped bits tend to stay in the bush on the river terrace, probably necessary when flows are high, while the triangled favour the river bank/ bed. The longer tracked sections are mainly over the headlands on the river bends. Just prior to the Hut the track crosses a helipad. Fit, experienced back-country trampers, traveling light during low summer river levels, could access the Hut in around 4.5 hours.

There is river access for kayaks or rafts from the Karamea Bend down to Greys.

Type
Greys is a standard six-bunk NZFS SF70 design with open fire. It has mock weatherboard iron cladding in place of the usual flat-iron, a common feature of Nelson Conservancy huts, and an open woodbox/ cupboard type alcove outside of the door. There is an external long-drop toilet.

Condition
DOC Westport had already completed some of the urgent remedial maintenance when Mayer and his team went in in February 2016. This comprised resealing the fire place and patching the hole in floor. The work completed by Mayer and Co. was painting of the inside and outside of the Hut, constructing a porch awning, replacing springs on bunk beds with 21mm ply, constructing shelving, a fire mantle, and hut book holder, fixing the toilet lintel, clearing the bush around the Hut and helicopter pad, cutting and stacking firewood, installing coat hooks, cleaning the roof, siliconing a damaged skylight and making a new drying rack They also made improvements to the route in the sections upstream of the Karamea Gorge, rerouting one section, cutting vegetation, and adding orange triangle markers where necessary. In 2021 Davey and John pulled out the old hearth poured a new one.

Routes
There are any number of routes to Greys from the Tasman Wilderness area and Kahurangi National Park via the upper Karamea and its numerous tributaries. All require high levels of fitness, bushcraft and navigation skills. Phillip Collyns mentions a trip over Bald Knob from the Ugly River (so-named because of the hordes of sandflies there) and down Greys Stream to the Karamea River. There is a headland just upstream of the Greys Hut that you have to bash over if coming downriver.

There used to be a track from Kakapo Stream up the TR of the valley to Greys, but there is only one account on hand of anyone using it in the past 22 years. It would be interesting to see if there were any useable remnants of this route.

Repairs needed
Some new skylights are needed to replace the brittle cracked ones, some bug screens for the windows, and repair of the concrete steps. There is one particularly challenging section of ‘track’ below the Gorge that requires attention and realignments by an experienced person in future (upstream from GR 376323). The route start could do with significant work from Umere roadend to the start of the pack track behind the private land (does anyone know if the landowner would permit those who requested access to cross?) Contact Jess Curtis at DOC Westport for track marking supplies as it is best to keep this track maintained with orange triangles.

Provisions on site
An aluminium basin, an axe, a hatchet, a billy (without lid), a frypan, a fish slice, two trestle seats, and H3 21mm structural ply sheets under Hut. There is more rodent bait and a key for the dispenser in the cupboard.