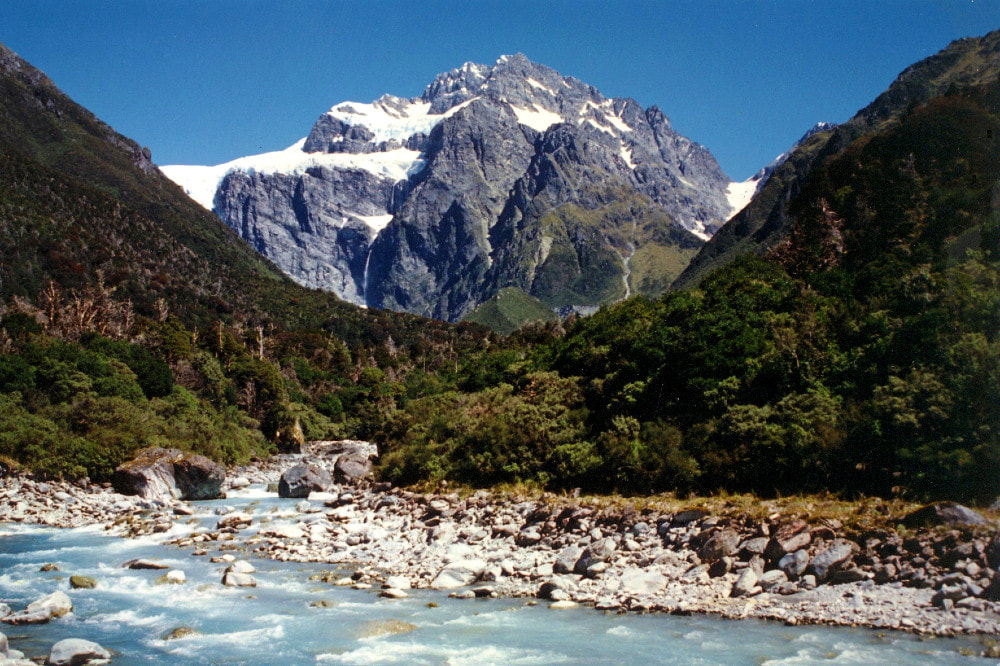 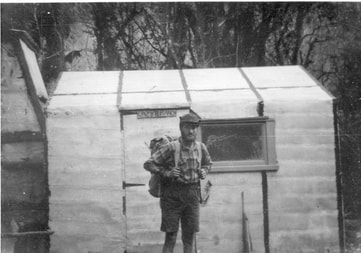 Ron Turner at Wilkinson Hut just after it was built: Photo 1957
Maintenance Status
Wilkinson Hut is designated as minimal maintenance. The main valley tracks in the Whitcombe River are fully maintained and were last recut in 2021. The swingbridge providing access to the Hut from the TR of the valley was overhauled in May 2019.

Location
Whitcombe catchment. Map BW18. Grid Ref: E1436568/ N5219830 (BW18 366 198). Altitude 605m. Wilkinson Hut is located at the top end of a river flat on the TL of the upper Whitcombe valley. A swingbridge 10 minutes upriver provides access from the main valley track on the TR, however Wilkinson is generally bypassed by those travelling between Price Flat and Neave huts on the Whitcombe Pass circuit. Wilkinson Hut is a relic of the 1950's, pokey and dark, but cosy with the fire going (watch your forehead on the low door frame!). It sits in a clearing ringed by regenerating hardwoods. Montane forest comprising rata, kamahi, totara and broadleaf cloaks the hillsides above. Hut users are a mix of fly-in hunters, those walking the Whitcombe Pass circuit, and occasional groups heading into the more rugged Price or Wilkinson catchments. The odd possumer has overwintered at Wilkinson over the decades.

Access
Wilkinson Hut can be accessed in around the same time from both sides of the Alps. The tracks and huts on the TR of the Whitcombe valley tracks are fully maintained by DOC and the huts are in good condition currently. Some sections between Frew Hut and Wilkinson are unstable and actively slipping into the River, taking bits of track with them. DOC did their last recut of the Whitcombe in 2021. It currently takes around 3.5-4 hours to get up to Wilkinson Hut from Price Flat Hut, or two days from the Hokitika roadend. Access from Canterbury side over Whitcombe Pass also takes two days and involves a crossing of the Rakaia River, which can be treacherous after rain. The Pass itself usually straightforward, although occasional deep snow in Winter can slow the crossing considerably. The last section from Neave Hut down to Wilkinson Hut takes around 1.5 hours.

Type
Wilkinson Hut was one of an unique batch of four a B48 designs built in Westland in 1957 by the NZFS. It was erected in the winter of that year by Ron Turner and Bill Radumski. The B48 was a forerunner of the SF81 design that later became the standard around the country. Its layout was strongly influenced by the Department of Internal Affairs huts built in the area earlier in the decade. The materials for the Hut were dropped in by fixed-wing aircraft and some of the timber framing was damaged on impact. Ron fashioned an adze from an old mattock and squared totara poles to replace the damaged bits and make the bunk uprights. NZFS later added a porch, and replaced the flat iron roof with corrugated iron. Wilkinson still has its open fire, and is lined with the original tar paper under chicken wire. There is a toilet. Water is from the River a short distance from the Hut.

Condition
Wilkinson is in reasonably good condition currently. DOC painted and resealed it, and did some floor and chimney repairs during the summer of 2003/ 4. A split clearlite sheet was replaced in 2014.

Routes
Price Basin Hut can be accessed from Wilkinson Hut down the TL of the River. An old NZFS track down this side was partially recut by some Permolat people in 2015. Head down to Pahlow Creek which is the second big unnamed side-creek marked on the topo map. Ascend the creekbed taking the TL branch at each of two forks and exit near the head where it starts to get bluffy. Sidle NE along a sloping tussock bench under the faces of Mt. Van Redan towards Johanson Peak. There are plenty of spaniards on this section. A scree slope at around E1435862/ N5222427 (BW18 359 224) provides access up onto Pahlow Ridge, which is followed up to around the 1500m contour. A cairn here marks the point where the sidle into Prices basin begins. Make sure there is a good line of sight down to the Hut. The faces leading down into the basin are not steep, but are rough and rocky underfoot, with scattered large boulders. The last 100m down to the stream passes through a band of scrub which could be avoided by heading upriver a bit and using the streambed that drains Mt. Van Redan. Allow 6-8 hours from Wilkinson Hut to Price Basin Hut.

The Wilkinson River can be accessed up the TL of the Whitcombe valley from Wilkinson Hut. An hour's boulderhopping will get you to the junction, with a few short detours into the bush to skirt bluffs and boulders. The Wilkinson is rough, swift, opaque, glacial meltwater, and its boulders are very slippery. It is usually difficult to ford and its levels can rise considerably over the day, during the warmer moths due to snow melt. The lower valley is bouldery with dense scrub often to the water's edge and travel is easier away from the River a bit, along the TR terraces. Finding a good deer trail will aid progress through the thicker patches of montane forest.
There is a steep bouldery cascade above Walcott Creek fringed by dense alpine scrub, and there is no easy way around this. Seddon Creek comes in above the cascade and is swift flowing. Ford with care and cross back into the Wilkinson over the a low scrub covered ridge on the TR of the Seddon. The last stretch of the Wilkinson to the ice lake is reasonably level, easy travel and the River can be crossed and re-crossed without too much trouble.

We have no recent accounts of travel up TR of the Wilkinson. The late Austen Deans in Capturing Mountains says, "Parties who really ought to have known better, have struggled and struggled; they've spent all day up and down over boulders. But if they'd asked me before they went I'd have told them to go into the bush as soon as you get to the Wilkinson from the Whitcombe on the South side. There are deer tracks that take you right up to the Wilkinson Glacier." Maybe this is still the case. 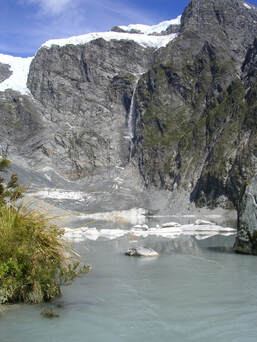 Wilkinson ice lake looking up to the rock buttresses of Mt. Evans: Photo Andrew Buglass 2009
The ice lake at the head of the Wilkinson is a stunning spot. A serene mirror reflecting the huge and daunting rock butresses of Mt. Evans. Small icebergs drift up and down the lake with the prevailing breezes and the stillness is punctuated by the regular crackle and roar of pieces breaking off the Bracken ice shelf and avalanching over the sheer rock bluffs.
A low saddle behind Agfa Knob provides easy access from the ice lake over into Seddon Creek. A large boulder cascade just upstream is rough going, and easier to skirt on the TL. A rather tricky ford near the top of the cascade will get you back over to the TR and the Bevernage Rock Bivs. A short scrub-bash is needed to get up to a couple of disappointing small, shallow overhangs that are hardly worth marking on the map. The largest would take two people at a squeeze. If you are considering spending a night or two in the Wilkinson, try kipping out under a gigantic, and clearly visible boulder, 15 minutes up Walcott Creek.

Above the Bevernage Bivs the Seddon becomes much easier going and provides access to Seddon and McKenzie cols. The approach to Seddon Col is up well graded V-chute which ascends all the way from the upper snowfield onto a band of smooth, glacial-carved schist due East of the Col. In the colder months the chute would be filled with snow, providing easy travel, whilst in late summer/ autumn it would be a fairly easy rock scramble, possibly slippery if wet.

The western side of Seddon Col is straightforward loose scree/rocks all the way down into Stag Creek. Stag Creek needs to be exited around the 1460m contour and the TR faces sidled from here to Ivory Lake Hut. There are a couple of exposed bits on this side and people may prefer to sidle along some easier tussock benches on the TL, drop back into Stag Creek where it flattens out, and climb up to the Hut from there.

The creek draining McKenzie Col turns into a dry rock gut a short distance above its confluence with Seddon Creek and is filled with avalanche debris from here on. Travel is straightforward up to the col, but there is a very high and constant rockfall danger. The County side of the Col is a near-vertical rock chute and doesn't look particularly nice from that side.

Allow eight hours for a return day-trip from Wilkinson Hut to the Ice lake, or five hours one-way with a full pack.

Provisions on site
Five litres of Lichen coloured paint, a bow-saw, a very blunt axe, two hearth shovels, a broom, an adze, a hearth brush, a shovel, a small camp oven, a billy (no lid), and a small pot. There is a roll of wire rope under the Hut.
Powered by