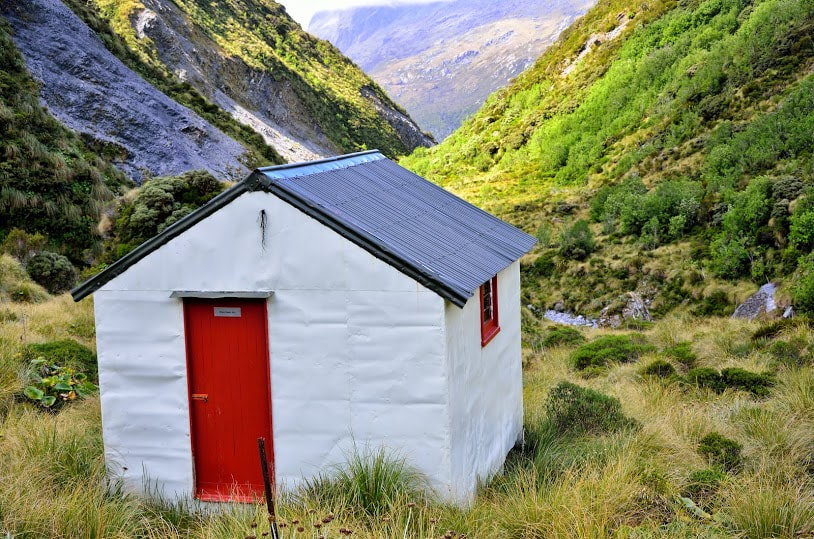 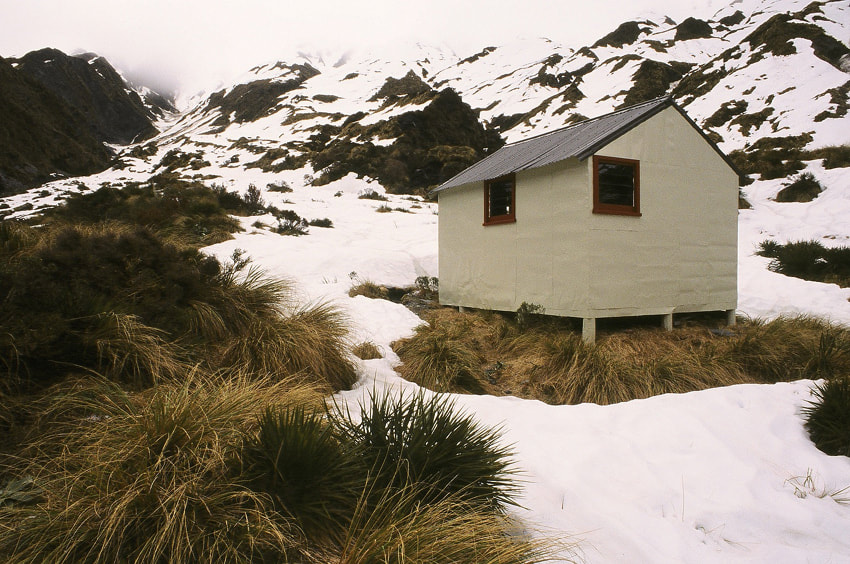 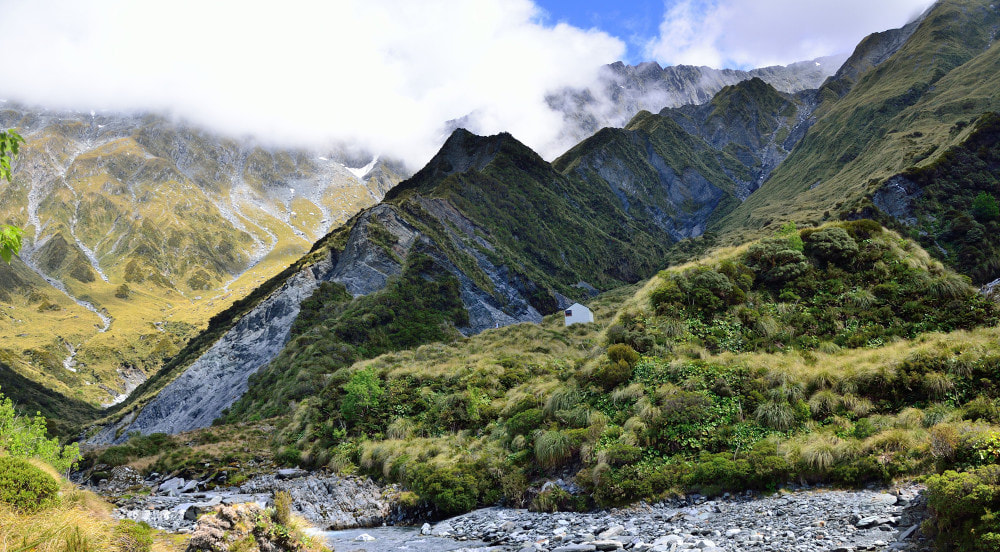 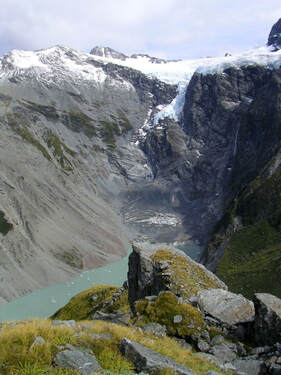 View of the Wilkinson ice lake and Glacier from the Thorndike tops - Photo Andrew Buglass
Maintenance Status
Price Basin Hut is a remote and very low-use hut, ostensibly fully maintained by DOC due to its possible usefulness for Tahr control purposes. No maintenance was done after 2004 however and in 2016 the Hut was added to Permolat's project list in our General Agreement with the Department. Ted Brennan and Annie Hughes from the Mikonui are going to pick this one up and hope to do a re-roof and repaint if their funding application with the Back country Trust is approved.

Location
Whitcombe catchment. Map BW18. Grid Ref: E1434362/ N5222640 (BW18 344 226). Altitude 1060m. Price Basin Hut is located in open tussock in the upper TR basin of the Price River, one of the larger tributaries of the Whitcombe River. The Hut is 50m from the River between two small side creeks. Price basin backs onto the Lange Range and Pahlow Ridge and is a spectacular and rugged setting. Below the Hut the river drops over a large waterfall and down through an impassable gorge to the Whitcombe valley. All the routes to the Hut are over the tops and are reasonably demanding, as well as being a good three-day's walk from any roadend. Foot visits are irregular, one or two every couple of years, with gaps of 2-3 years not uncommon. There are occasional fly-in tahr hunting trips. Rock wren can be sighted in a few spots above the Hut, and around Mt. Wylde Brown.

Access
The most direct access to Price Basin is up the TR of the Whitcombe River. The valley tracks here are maintained by DOC and are usually in good condition, although there is a fair bit of active slippage between Frews Hut and Wilkinson along some of the bush sidles. DOC did their last recut of the valley in 2021. There are a number of large unbridged side-creeks on the way up that would hinder travel after heavy rain. Allow two days to reach Wilkinson Hut from the roadend, and from here head back downriver on the TL to Pahlow Creek. This is the second big side creek around an hour downriver from the Hut, and is unnamed on the topo map. An old NZFS track down this side was partially recut by some Permolat people in 2015. On rare occasions, mostly in winter when the River levels are very low, it is possible to ford the Whitcombe from the main valley track opposite, or near Pahlow Creek. This would save having to go all the way up to Wilkinson Hut and back down the TL. Mostly however, this is not possible, or safe.

Head up Pahlow Creek taking the TL branch at each of two forks. Exit near the head of the Creek where it starts to get bluffy and sidle NE along a sloping tussock bench under the faces of Mt. Van Redan towards Johanson Peak. There are plenty of spaniards on this section. A scree slope at around E1435862/ N5222427 (BW18 359 224) provides access up onto Phalow Ridge, which is followed up to around the 1500m contour. A cairn here marks the point where the sidle into Prices basin begins. Make sure there is a good line of sight down to the Hut. The faces leading down into the basin are not steep, but are rough and rocky underfoot, with scattered large boulders. The last 100m down to the stream passes through a band of scrub which could be avoided by heading upriver a bit and using the streambed that drains Mt. Van Redan. Allow 6-8 hours from Wilkinson Hut to Price Basin Hut.
Parties intending to fly out of Prices should take in a bit of extra food. Due to frequent poor weather and the basin often being misted-in, pick-ups can be delayed several days.

Type
Price Basin Hut is a pretty much unmodified, NZFS S81 four-bunk design, built in 1962. It is unlined. Water is from the creek next to it. There is no toilet.

Condition
DOC repainted and resealed Price Basin Hut during the Summer of 2003/4. The Hut was in reasonably good condition at last report (2018). Some water is getting in around the window frames during heavy weather.

Routes
For the more experienced types there is an alpine crossing the Lange Range from Prices Basin over to Ivory Lake Hut Access is up the side-spur that connects Mt. Wylde Brown with point 2056m. This is mostly easy travel apart from a rock buttress near the top that can be sidled around on its South side. This isn't normally problematic, but caution would be needed if there were hard snow or ice. From point 2056m drop directly down to the Southern end of Ivory Lake. The Hut is visible most of the way down in clear conditions. In high summer and autumn the crossing is usually snow-free, apart from a small patch on point 2056m. It would be advisable to carry ice axes and crampons at other times. Allow 5-6 hours from Hut to Hut in good conditions.

A high traverse is possible from Price Basin Hut to the Cropp Basin although it is not a particularly easy route. Access from Mt. Wylde Brown down into the TL branch of Price River involves a lengthy downhill scrub-bash. It may be easier to drop down the side-creek from the low point west of Wylde Brown. It looks OK from the Cropp Brow, but is as yet untried. Access from the lip of the TL basin of the Price River up onto The Rotunda is up some steep faces composed of rotten, unstable rock, and extreme care is required on this bit. Once on the Cropp Brow it's very easy going and there are several routes down into the Cropp basin.

Alternately, continue down Steadman Brow to Cropp Knob. This is straightforward apart from a short steep exposed section just above the 1620m contour which is probably OK to upclimb without protection, but it may be advisable to carry a rope for those heading down. A maintained track provides access down a side-spur that connects with Cropp Brow at a flat area just NE of Cropp Knob. The track should still be in good shape although a party in January 2019 had a bit of trouble locating the top entrance markers which are a bit further north than where the track is marked on the NZ Topomap. It leads down to the Price Flat swingbridge in the Whitcombe valley, taking around two hours from the scrubline.

Access from Price Basin up onto the NE ridge of Mt. Thorndike is relatively easy. There are great views from the Thorndike tops over the Wilkinson Ice Lake to Mt. Evans and the Bracken Snowfield.

Repairs needed
The hut windows could do with re-flashing. The Hut will need a re-roof to comply with the “no lead” approach, a repaint inside and out, and attending to any rot issues that may exist.