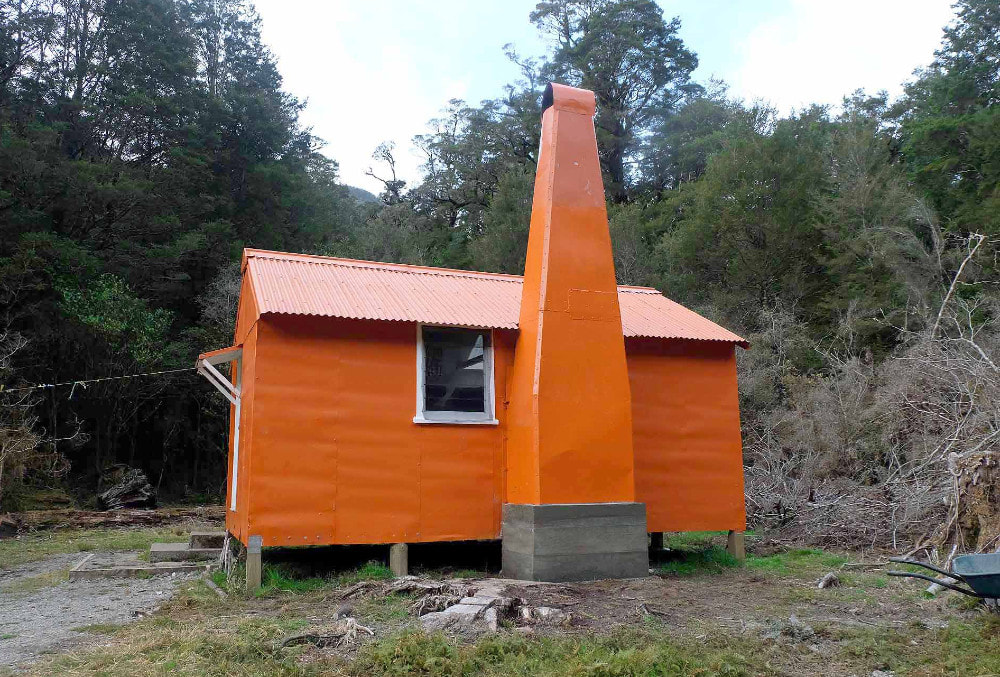 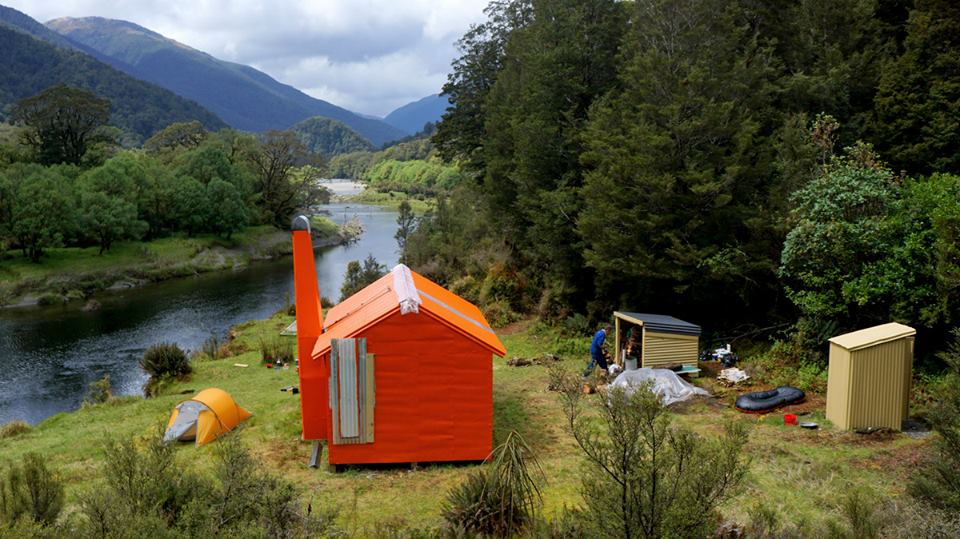 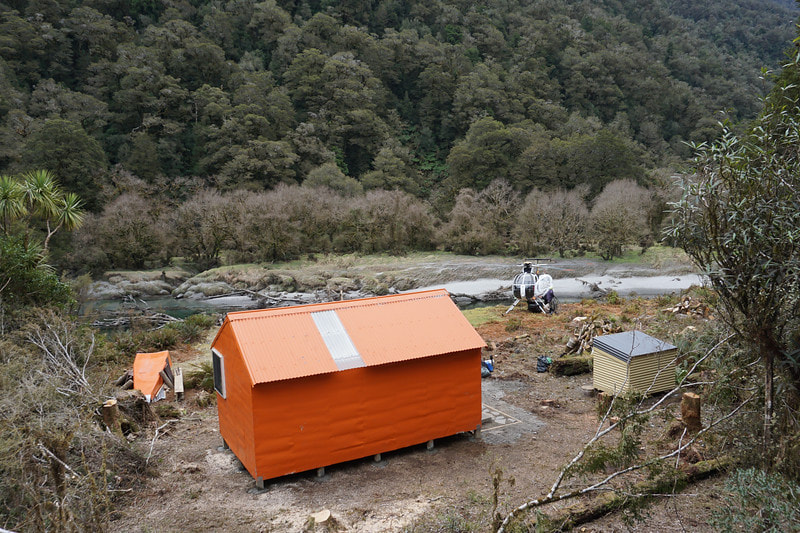 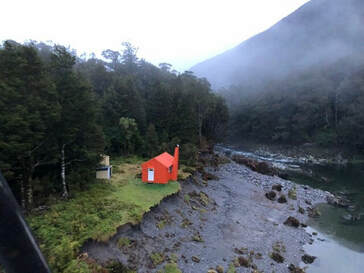 The washout at Thomas River Hut taken after the second flood in March 2019
Maintenance Status
Thomas River Hut is another of the community projects undertaken by Permolat. In 2016 Geoff Spearpoint obtained some Back Country Trust funding and carried out some repairs and trackwork. In 2018-19 a series of floods washed out a large section of riverbank and left the Hut perched above the River. DOC cleared some forest up on higher ground and winched the Hut out of harm's way, then in September 2019 a volunteer/ DOC team moved it to the new site.. In September 2020 the crew went back in and attached the chimney.

Prior to all of this Thomas River Hut hadn't had much in the way of maintenance for a couple of decades. It's a low-use hut due to the Thomas catchment being on the TR of the Haast River. A crossing by raft or jet boat is necessary for foot access and so it's no surprise that most visits are fly-ins, usually hunters or fishers. The route up the TL of the valley to the Hut is is a mix of track and river travel.

Location
Haast Catchment, Thomas River. NZTopo50 Map: BY12 Grid/NZTM2000 coordinates: E1294389, N5132955 (BY12 944 329). Altitude 160m. Thomas River Hut is sited on a low terrace on the TR of the valley. There are large still pools and gravel flats further upstream, and downstream the river tumbles through bouldery stretches of beech/ kamahi forest. The mozzies up here can be bad and sprays, repellent, and nets can be useful.

Access
Once across the Haast the TL riverbank of the Thomas is followed. There are forested flats from Law Flat to about opposite Trig Creek and above here a track can be followed to the Hut. This last bit was cut and marked by Geoff and his crew in late 2016. Allow 4-5 hours to the Hut from the Haast River. The river downstream of the Hut is not easily crossable for some distance. An old track up the TL upstream of the Hut was recut and marked up to the first good gravel crossing by Geoff and Co. in 2016. The Thomas is a valley in which a pack raft is quite a handy item to have. 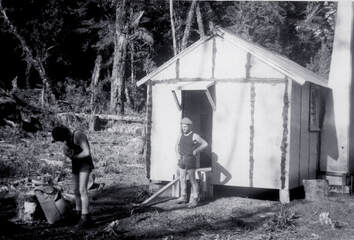 Condition
Thomas River was in reasonable condition when Geoff first inspected it in 2015. In 2016 he, Hugh van Noorden and Liz Wightwick did some door repairs and replaced some external wall cladding, and some of the internal ply lining. They built a new woodshed, replaced the rotten toilet seat, cut back some vegetation, and did a little trackwork. Later in the year Geoff, Liz, Hugh, Tracy-Lee Burkhart, and Peter Fullerton returned and replaced the ridging and skylight. The end window was removed and re-flashed, the Hut painted, and the tracks above and below the Hut recut. The Chimney was reattached in September 2020. Images of the Hut shifting process are at: gowildnz.smugmug.com/Thomas-River-moving-2019/. Geoff and Jane Morris attempted a roof paint in October that year but rain set in and washed it off.

The recently built Mataketake Hut on the Range bounding the TR of the Thomas could be incorporated in some kind of circuit that includes Thomas River Hut. On a recent trip a party dropped down from the Range  on the true left of Wyllie Creek. Travel though the bush was reasonable with the odd deer trail to follow. It took around two hours to get from the bushline down to the River, and so would probably take three going up. This line ends at a fairly wide and shallow spot where the Thomas can be forded.

Provisions on Site
An axe, two brooms, a metal water bucket, plastic bucket, frypan, and a couple of billies.
Powered by