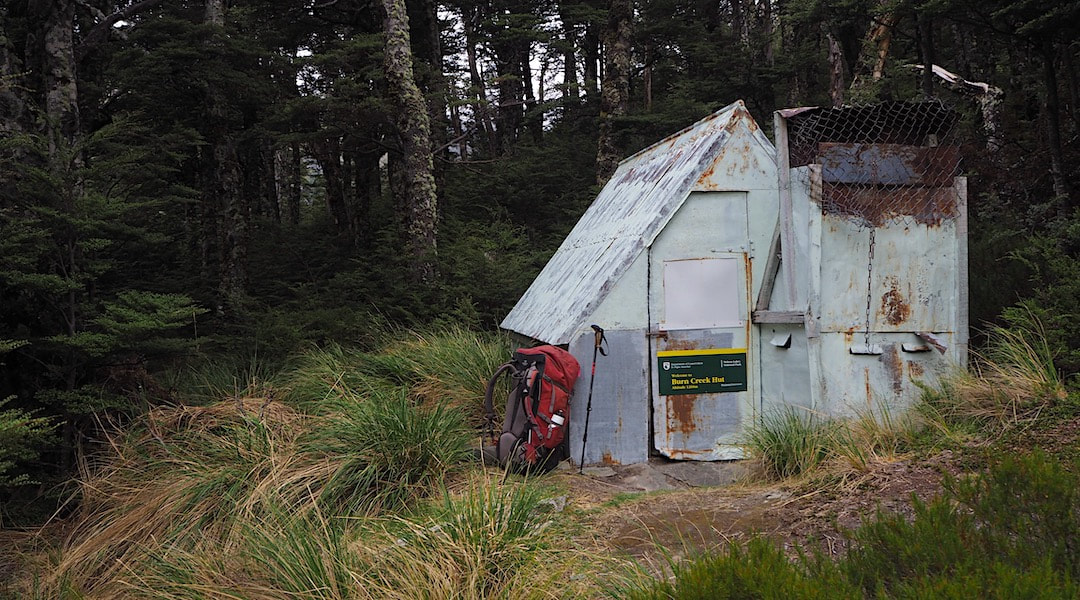 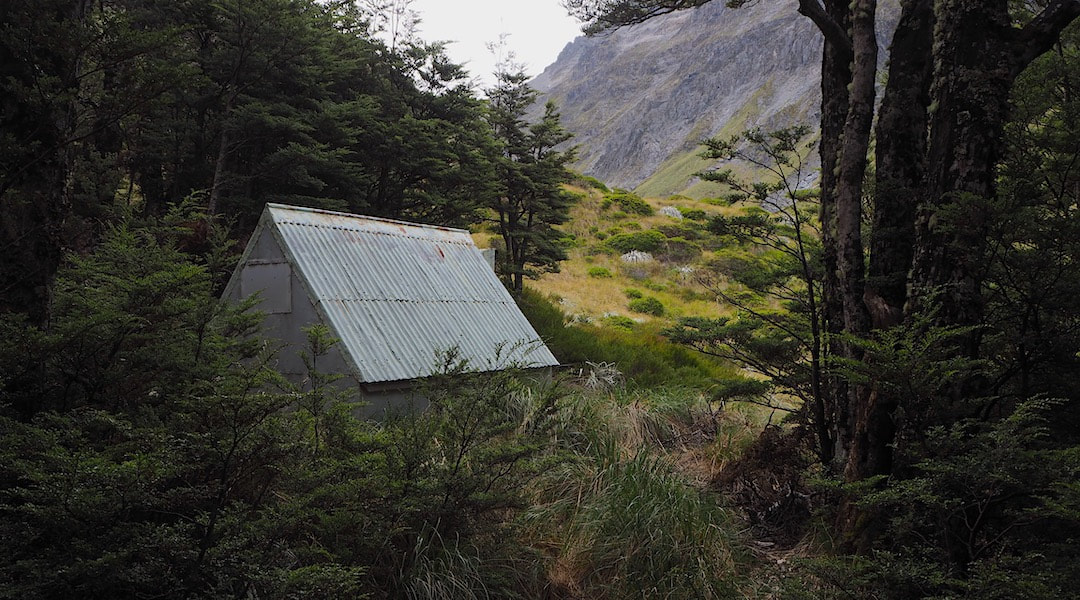 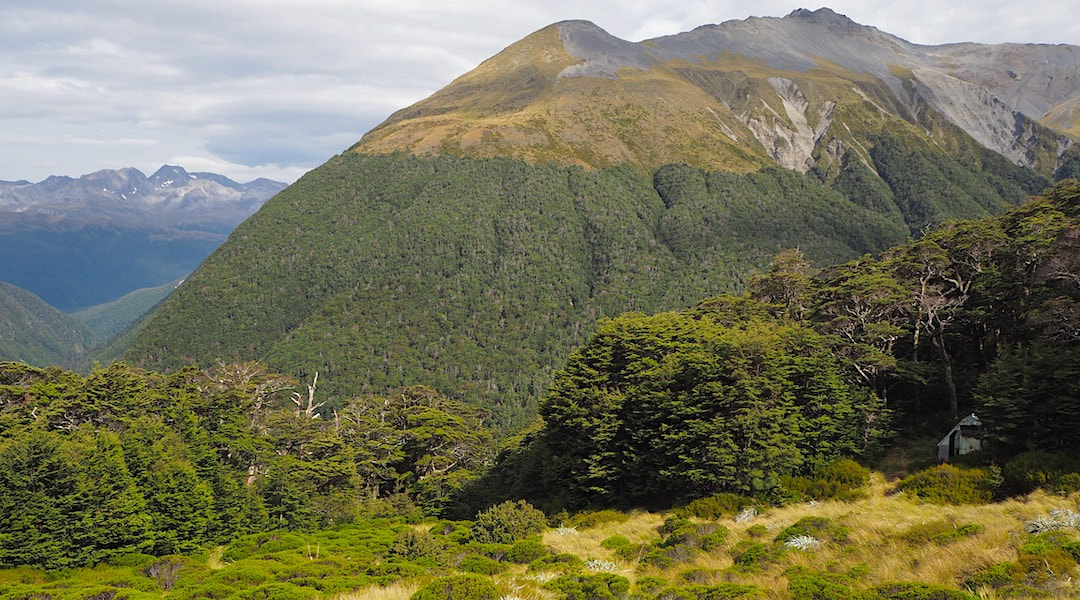 Maintenance Status
Has this hut ever had any maintenance, let alone a designated status?! Despite being wonderfully located, Burn Creek Hut has received very little love over the years, but is still retrievable. Built in 1958, the hut is essentially leftovers from the construction of Bobs Hut further up the Matakitaki valley. The route up Burn Creek was probably first established by gold miners in the mid 1800s. The NZFS would have been the next lot to do it up. At the bottom of the Creek a DOC sign states that the track has not been maintained since 1994 however, a note in the hut book from 1991 complains about the state of the track even then. The route from Jacobs ladder up is a mix of ancient white NZFS permolat, occasional blazes, and newer blue markers. BCT and DOC have been scoping out a possible restoration of the Hut which would most likely incorporate some trackwork. There has also been some interest expressed from the high-country community for this.

Location
Matakitaki river catchment. NZTopo50 map sheet: BT23, Grid/NZTM2000 coordinates: E1554518, N5332738, altitude 1260m. Burn Creek is nestled into the upper limit of the beech forest, at the edge of a spectacular alpine basin on the Emily Peaks range, in the south-west corner of Nelson Lakes National Park. Visits are few as was the case even back in 1975 when Graeme Coop first visited it. There were no hut book entries in 2018 calendar, and none during a four-year period from 2002 until 2006. There is a river flat upstream of Jacobs Ladder that was inhabited by gold miners in the 1870s, and again during The Depression. Some piles of stacked rocks are the only visible remnants . 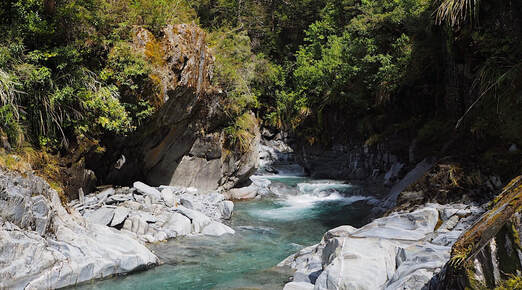 Burn Creek just before the waterfall: Photo Graeme Coop
Access
Many visitors to Burn Creek come from either Nardoo or Bobs Hut over the tops. This is only for the energetic and requires decent weather. Those wanting to come up Burn Creek will also need to be fit and experienced. From Downie Hut a crossing of the Matakitaki is required making it a fine weather route only. It is easier to cross the River close to the Hut than further up. The track up the lower portion of Burn Creek is pretty well washed out but it’s easy enough to follow the creek bed, crossing as required. The track around Jacobs Ladder starts at a steep blown out creek that enters the Burn on the TR at E1558539/ N5330759. A permolat cross and a cairn mark the exit point around 100m up the side-creek and a rough but well marked route takes you up to a steep section with a length of Number 8 wire to assist the climb (which probably isn't that trustworthy). The route from here is well-marked with blue permolat-type markers. It stays above the bluffs before dropping to the flat with the old gold workings. Continue up the creek bed from here. A small waterfall can be skirted on the TR to reach an open grassy area at the junction of some side-creeks. From here there is a climb adjacent to a waterfall to the top of a flat ridge,  then a short bush-bash to get to the Hut. Allow 7-10 hours from Downie Creek to Burn Creek Hut.

Helicopter access has historically been forbidden due to Burn Creek's location within the National Park. Lately however, high deer numbers on the tops have led to a temporary policy change and recreational hunters have been permitted to fly-in for animal control purposes. 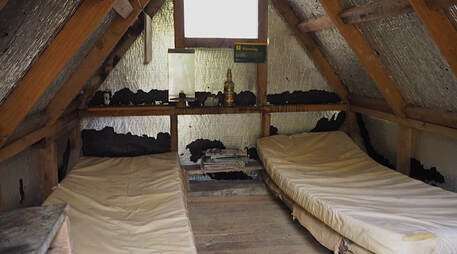 Burn Creek interior: Photo Graeme Coop
Type
Burn Creek Hut could be more correctly classified as a Bivouac. It is a one-off structure built in 1958. after Jock Fisher of the NZFS got Ray Osman to go in and erect "a bivi you could stand up in" using leftover materials. The frame sits on the ground - there are no piles. It is lined with chicken wire and tar paper with rudimentary plastic windows at the end and in the door. It has a fireplace and chimney with an external wooden frame next to the door. There are two low-level platforms with mattresses resting on a wooden planked section of floor that extends to the end of the sleeping area. The floor is river rocks from here to the door. There is no toilet. Water is an issue here. There is a murky trickle marked with a pole 20m from the Hut but it's probably better to take the fairly long walk over to Burn Creek for water.

Condition
Ollie Clifton says that Burn Creek is on the brink, but retrievable. Graeme Coop says it needs some love and attention but is, still comfortable and watertight. The timber framing is not drawing up too much moisture despite resting on the ground. The chimney is in bad shape and rusting away at the top. DOC and Back Country Trust are working on getting the resources together to repair it.​ 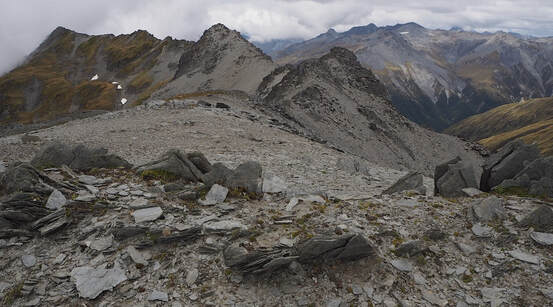 Emily Peaks from Point 2024: Photo Graeme Coop
Routes
There is a high-level route linking Burn Creek with Nardoo Hut that can be undertaken by hardier types. The most direct line is straight up Burn Creek basin. There is a 15 m waterfall that needs to be skirted if you do this. The alternative is to go up the ridge behind the Hut. From here the crest of the range is followed past Emily Peak, points 1916m, 1786m to the low point between an unnamed bump and point 1840m. Care needs to be taken on the descent as there are bluffs that can't be seen from above. Drop down the slope here towards a gut, hanging close to the right as you get towards the cliffs. There is a short section immediately above a decent bluff that needs to be traversed. There is flax growing here to hang onto and once over this pitch it is a straightforward amble down to Nardoo Hut which is visible as you descend. The head of Burn Creek is avalanche prone in the colder months. The rest of the traverse is an alpine crossing and necessitates the carrying of appropriate snow gear depending on the season and conditions. In late summer and autumn when snow-free it is a more straightforward affair, although still prone to the usual alpine weather extremes. Allow 6-10 hours for the crossing.

Access is also possible from the Southern end of the range and Bobs Hut. These are also alpine traverses requiring high skill levels.

Repairs Needed
A scoping of the hut in September 2021 by Backcountry Trust and DOC left Ollie Clifton of the Trust feeling hopeful that a historic restoration was still possible. The Hut would be significantly improved by raising it and installing on top of an H5 skid bearer at ground level, adding a timber floor under the bunks, maintaining the stone floor at the entrance, repainting the roof and re-aligning the chimney cap to face downvalley, replacing the plastic windows with clear perspex, removing some trees to let in more light, and installing a thunderbox loo and a small woodshed. Other ideas/ suggestions are welcomed. If someone wants to put their hand up to do the main valley track up I'm sure the BCT would come to the party with some funding. A water barrel next to the Hut would save a 10 minute walk to the Creek.

Provisions on site
There’s a shovel without a handle, a bow saw, an axe, two billies and an aluminium basin.
Powered by