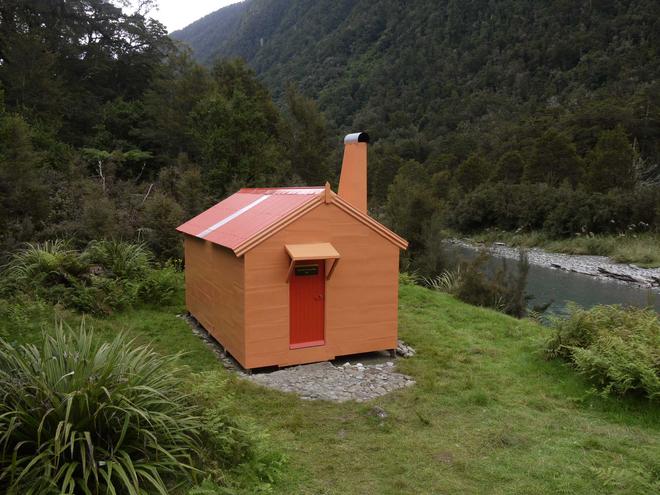 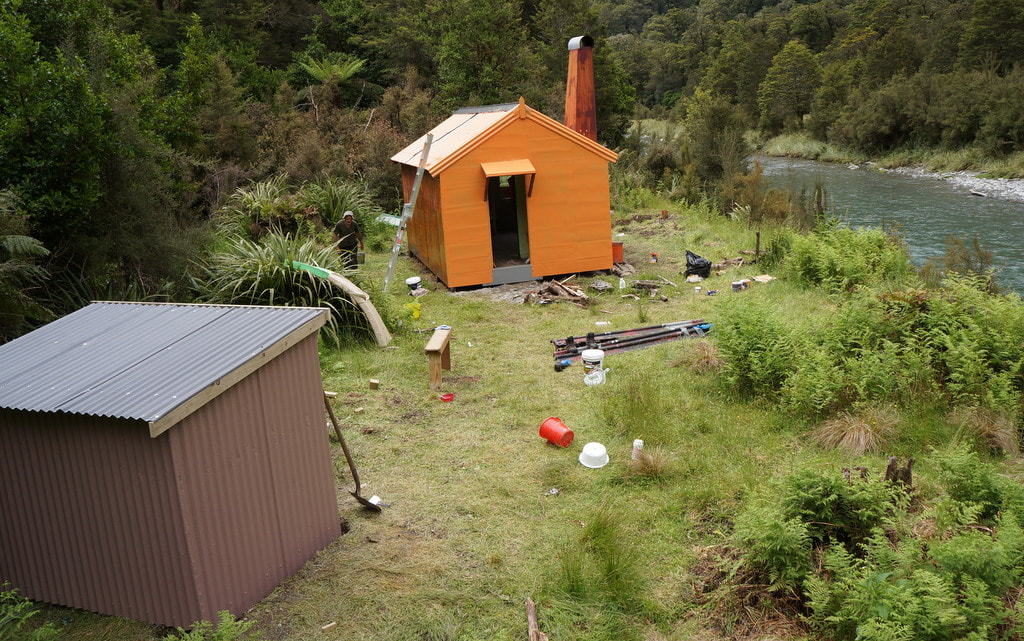 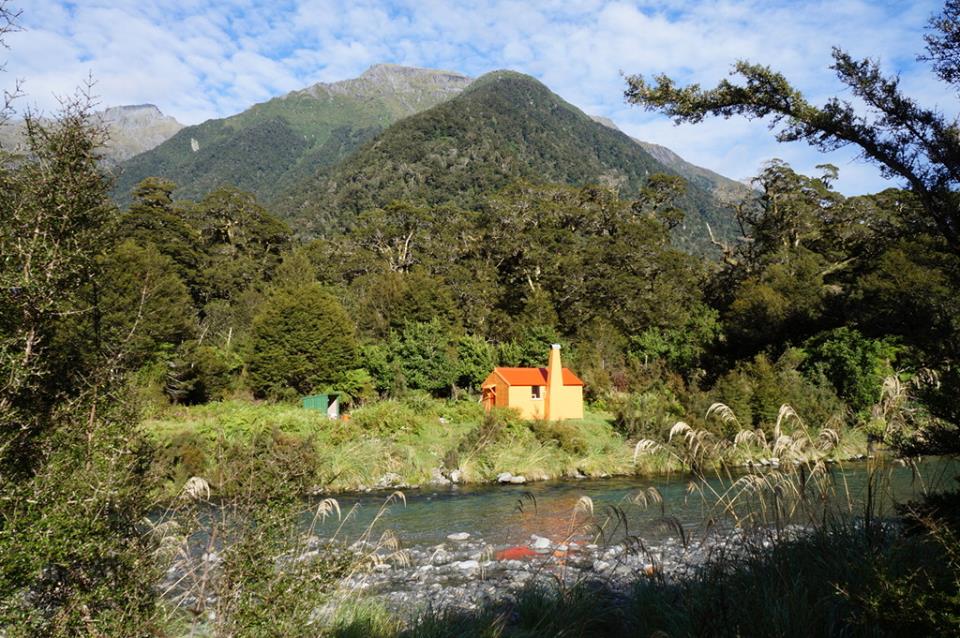 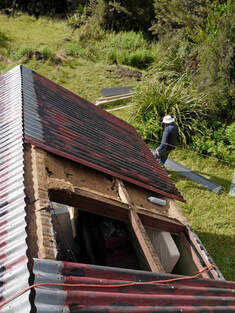 Roof repairs: Photo Geoff Spearpoint 2014
Maintenance Status
Tunnel Creek Hut is a Permolat maintain-by-community initiatives, with Geoff Spearpoint as contract signatory. The Hut had missed out on having any significant maintenance for a couple of decades, although had DOC had flown workers in from time to time to carry out inane compliance tasks, such as putting up "no smoking" and "fire exit" signs (in a Hut with one door!), and top bunk restraining rails. The track up from Stew Creek had been left similarly unmaintained and river travel had become the norm as an alternative in many places. The Hut is now in good hands, had a complete makeover from Geoff and helpers in 2014, and the access track cut.

Location
Paringa catchment. Map BY13. GPS Ref: E1321593/ N5142317 (BY13 216 423). Altitude 150m. Tunnel Creek Hut is located in the head of the Paringa valley in South Westland. It drains the Solution Range which includes Mts. Hooker and McCullaugh, both rugged and glaciated peaks. The Paringa is a valley of contrasts, with picturesque, gentle lower reaches and rugged, remote alpine headwaters. The unnamed saddle at the head of the Paringa provides access into McCullagh Creek and the Clarke valley in the Landsborough. Tunnel Creek gets a reasonable level of use from range of groups, including hunters, fishermen, possumers, trampers and climbers. The number of visits has doubled since the maintenance work was done.

Access
Access to Tunnel Creek Hut is up a farm track just South of the Paringa bridge on SH6. Ben Monk (Tel: 03 751 0899) farms the River flats up to the Otoko confluence and likes folk going through to ring and let him know. Most folk travel up the TL which is a mix of grassy flats, track and river travel. It is possible to cross and recross the River at low flows to get a straighter line and reduce travel times. There is a small bluff on the TL just below Stew Creek and depending on River levels and the lie of the channels, it may be possible to pass under it and take a direct line to Stew Creek. If this isn't possible there is a cut route over the bluff that drops into Stew Creek up a bit from its confluence with the Paringa. At last report this wasn't the best of travel. Another option is to ford the Paringa further down, travel up the TR, then cross back opposite Stew Creek.

There is a locked hut belonging to Ben on the TR of Stew Creek. A track commences by the shed here and goes up the TR of Stew Creek for around 500m before cutting South through open grassy meadows and patches of forest to connect with the Paringa a couple of kilometres above the Otoko confluence. From here to the Hut it is mostly track with several short sections of river travel. A large unnamed side-creek around an hour up from Stew Creek would be problematic to cross if it was high. The tracked sections are mostly across fairly gentle terraces with a silver beech canopy and crown fern (piu piu) understory. The River is stunningly picturesque, with beautiful clear water, and large still pools and mossy boulders. Serpentine Creek has blown out and enters the Paringa in two separate channels, the second of which has quite a bit of windthrow in it. The track crosses both branches a short distance up and from here however, it is an easy 15 minutes to the Hut. The track was in good shape at last report (May 2019). Allow 1.5-2 hours from the Bridge to Stew Creek, and 2.5-3 from there to the Hut.

There is helicopter access on the grass clearing next to the Hut.

Type
Tunnel Creek Hut is a standard NZFS 6-bunk S70 design with open fire, built in 1965. It was lined at some point. A toilet was built in the late 2000's by some community spirited type. The woodshed was built by Geoff and Co. in 2014. Water is from the River right next to the Hut.

Condition
Tunnel Creek was in remarkably good condition prior to the 2014 repairs, even after a couple of decades of neglect. The frame, joists and bearers were sound, and the structural wood all treated pine. In April 2014 some broken floorboards were replaced by Geoff and Liz Stephenson, a leak between the chimney and side window repaired. and some facing around the door replaced. Later that winter Geoff, Hugh van Noorden and myself recut and marked the track up from Stew Creek. December 2014 saw the bulk of the maintenance completed by Geoff, Hugh and Peter Fullerton using funding from the new High Country Consortium. The flat-iron doorstep protector, back windowsill, skylight and roof ridging were replaced. The woodshed was built and the fireplace relined and concreted on the inside. Sections of buckled interior ply lining were replaced, the exterior repainted. A drainage channel leading away from the Hut was dug. In January 2015 Hugh and Tracy Burkhart walked in, finished the exterior walls, and put the first two coats on the interior. Then a month later in March, the final exterior colours, skylight drip cover, long drop upgrade, and interior top-coat were completed by Geoff, Liz and Hugh. Another party led by Geoff went in this December to do more work on the Hut and track. They didn't manage to get all the the trackwork finished. 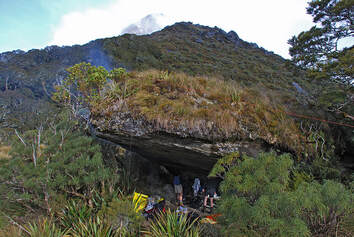 Tunnel Creek Rock Biv: Photo Danilo Hegg 2009
Routes
There is a track up to Tunnel Creek Rock Biv from Tunnel Creek Hut that hasn't received any maintenance under DOC's tenure but has been kept open at a rudimentary level by those using it. The track starts on the TL of Tunnel Creek a short distance up from its confluence with the Paringa. It climbs steeply up the bush faces initially, then flattens and proceeds in a series of steps onto point 542m. The forest on the top of this knoll is thin and stunted with open patches. From here the track drops into a hollow before climbing the broad spur up to the biv. Geoff and Jane Morris did a bit of trimming and re-marking on the upper sections of it in May 2019. Around the 1040m contour the terrain flattens and the silver beech forest transitions abruptly to open tussock. The rock biv is just north of where the track emerges. It has a fireplace and can sleep four or so people quite comfortably. Water can be a bit of a problem up here during dry periods, and the couple of small shallow tarns in the vicinity sometimes get fouled by deer stomping around in them.

The Buttress, the Saddle over to McCullagh Creek, and Douglas Spur: Photo Danilo Hegg 2009
To access the head of the Paringa from the rock biv, head South across the bench and up through a narrow tongue of beech forest around into the top basin of a small side-creek that feeds the upper Paringa. Sidle southeast along the low ridge bounding the creeks TL, and past the tarn marked on the map. Countinue sidling at around the 1200m contour for another 4-500 mteres, then drop down into the head basin of the Paringa. Follow the Paringa up to around the 1220m contour where it veers NE, exit and head straight up the tussock faces to the unnamed saddle at 1440m. There are a few bluffy bits on the McCullagh Creek side of the saddle which can be avoided by picking the right line down.

The large tussock flat just above the bushline in McCullagh Creek has plenty of good camping spots. From here it is a long, rough descent down to the Clarke River, up Saddle Creek, and over to Marks Flat. Alternately, there is a high tops sidle around the head of Murdoch Creek and the lower SW ridge of Mt. Hooker that would provide access to Marks Flat. Allow a full day for both routes. A higher sidle is also possible under The Buttress and points 2005 and 2018m onto the South McCullagh Glacier, then around the 2000m contour and down into the top basin of Murdoch Creek, just below the ice lake. Alpine gear and skills are required for route as there are some big slots on the upper McCullagh Glacier, although it may now be possible with glacial retreat to sidle lower around the rock slabs below the snowfield. 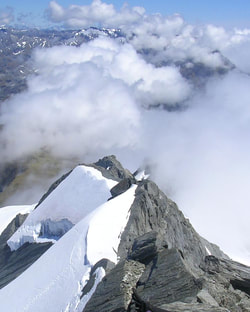 View South from McCullagh - Photo Andrew Buglass 2006
Mt. McCullagh is a relatively easy climb via its western ridge from the low point just East of point 2018m. This is a rock scramble in late summer and autumn, but would require snow gear at other times.

There have been sporadic crossings of the saddle in the head of Serpentine Creek between Tunnel Creek and Middle Head Hut, but it is not a particularly easy route, with bluffs and alpine scrub to contend with. The lower portion of Serpentine Creek is gorgy most of the way, but can be negotiated on the terraces on the TL. The head of Serpentine Creek is scrubby and bluffy with waterfalls around the 500m contour. An unmaintained, overgrown NZFS track goes the open flat at point 606m down to Middle Head Hut. 12-14 hour track times are the norm for this route. The track from Middle Head down to Horseshoe Flat in the Moeraki is no longer maintained, but is still relatively easy to follow.

Repairs still needed
None currently. The track will need finishing off at some point.